Sitting with the side hatch open you can hear things going on for quite a distance. This morning we gradually could hear what sounded like a heated debate, or argument going on in strong Welsh accents. Not too sure what it was all about but she certainly wasn’t happy with him. As their boat got closer the engine noise got louder and so did the argument. A hire boat. Living in a confined space isn’t for everyone, this was going to be a jolly holiday for them! As the boat passed by they continued bickering, we made a mental note not to moor anywhere near them if we came across them again. Then we noticed that the couple were not alone. Sat by the tiller was another couple who looked very much like they wanted the boat to capsize and for the canal to swallow them up. Doubt they will be going on any further holidays with their friends! 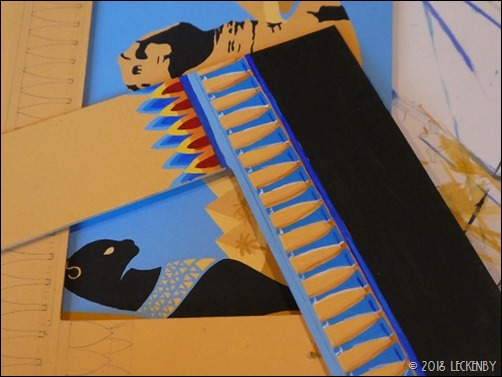 More work for me, more towpath time for Tilly and more cricket to listen to for Mick. England however weren’t doing so well so by mid morning Mick headed off down to the locks to watch what was going on, he’s becoming a regular gongoozler.

Foxton is a flight of narrow locks, made up of two staircase locks with five chambers each. Because the locks are narrow only one way traffic is possible through the staircases. At the mid point there is a short pound where one boat can be passed by others. Some of the Lock Keepers make use of the passing place whilst others prefer not to. When you arrive at the locks the first thing you have to do is go and find the Lock Keeper with the book to check in. You are then normally told whether to start to come down, where you are in the queue or to put the kettle on and have lunch as there is a long wait. We’ve been up and down the flight several times in the past, we have had the whole flight to ourselves and had to queue setting off down the flight in the middle of a group of three boats. 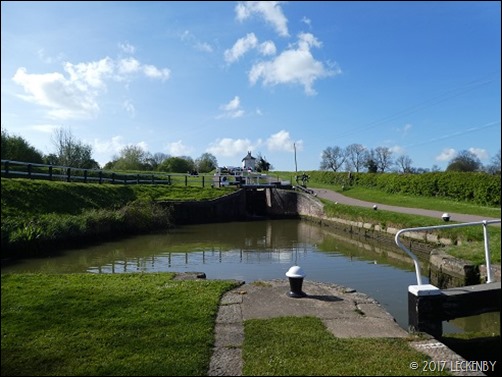 The locks are easy to use as long as you remember the rhyme,

At the mid point the red and white paddles are at different sides of the short pound, it takes a little bit of time to walk from one to the other, but it stops a lock full of water being wasted and going straight down the bywash. Mick watched as one boat came down, he stopped them from lifting the wrong paddle first, pointing out a sign on the lock beam, the crew went off to check with one of the lock keepers, Mick had been correct and the paddles were done in the correct order.

One boat had come up and was waiting in the middle passing place, three more were making their way down the top flight. A boat was spotted in the second chamber from the bottom heading up. How had they got there? Why were they there? Who had told them they could start to come up? With two boats pointing downhill in the top five locks, one boat at the top of the bottom five pointing downhill and one in the passing place there was nowhere for anyone to go. If they carried on up the flight there would have been four boats in the middle pound before anyone could carry on and it is only just big enough for two boats to pass each other. Something had gone wrong somewhere! 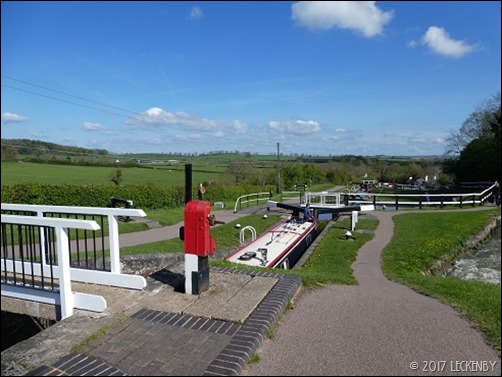 The Lock Keepers came and sorted it out. The boat coming up had to reverse down the bottom two locks to clear the way for the three coming down hill, once these were all out of the way they could start the flight for a second time. The boat in the passing place, once the top five chambers were clear could start heading up again. We are fairly sure that we know the boat that was in the way and they will have done Foxton many times as they moor in the area. So was it just a misunderstanding? Had they been told one thing when another had been meant? Was one of the five Lock Keepers having a laugh? Who knows. But what I do know is that it kept Mick occupied for much of the morning and some of the afternoon which meant we had quite a late lunch.

The sun had come out and the cricket seemed to have improved whilst Mick had been watching boats, but then England started to loose wickets again!