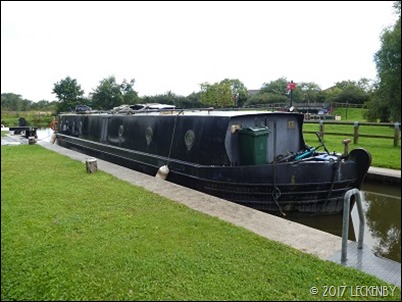 The fifth boat arrived this morning at 7.30am, a wide beam who pulled into the open lock to moor up, there was nowhere else really that he could go without being in the way. But if he thought this would mean that he’d be first down the locks he was wrong. 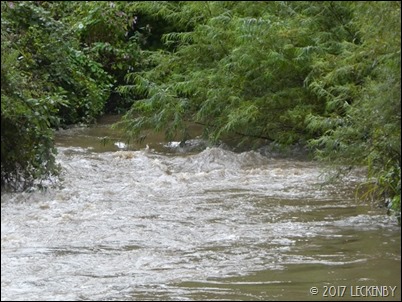 Roger arrived and had a guided tour of Oleanna and a cuppa before the C&RT chaps turned up. Last nights heavy rain meant that we were all prepared for a wet crossing and we went out to see what Harrys verdict was for us to cross. It turned out that even if the wind was within range we wouldn’t be going anywhere today. The heavy rainfall had caused Savick Brook to go into flood, meaning that the level was too high to get under bridges on the link. When we went down to the bottom of the staircase we could see the strong flow of water bubbling away, which would have made it near impossible to turn out from the bottom chamber safely and it would be behind us, pushing us heading to the locks, very little chance of slowing down.
Tomorrow the chaps will turn up again and assess the situation, chat to Harry and let us know if we can cross. To us it’s not that much of a problem, we can wait. But others have places to be and plans, however there is no alternative but to wait, you can’t argue with Mother Nature and tides. There are so many factors to take into account we were quite glad that Harry is on the case. Fingers crossed for tomorrow.
Mr Widebeam apparently will be going last. He is getting a tow from the bottom of the link as his engine is having problems. So in case he breaks down the rest of us will go ahead of him.
We all retired back to our boats, Bridget took orders for Saturday newspapers and went off in search of a newsagent. Roger departed and there was only one thing for it, we’d have brunch. Well there was the last of the smoked salmon to finish off! 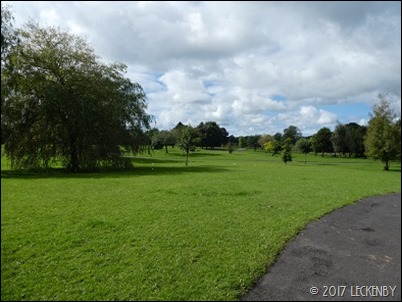 Over this weekend numerous places are open to the public as part of Heritage Open Days. We’d had a vague look at what was on offer the other day, but not taken much notice as we’d be busy crossing back to the main land. So over breakfast we looked again. For a couple of hours this afternoon you could gain access to the Egyptian Balcony in the Harris Museum. We all wanted to look at the gallery anyway so this spurred us on into town. After a short walk up the very wet towpath we headed across Haslam Park to find a bus. 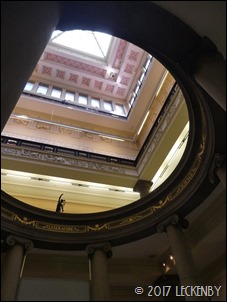 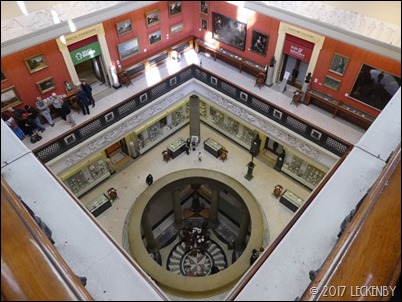 A rather stunning building inside and out, The Harris Museum contains the Library, Museum and Art Gallery. Built from a bequest from a Preston Lawyer Edmund Robert Harris in memory of his father, Rev. Robert Harris, who had been vicar at St Georges Church for 64 years. The building opened in 1893. The views up through the atrium are as good as they are down. 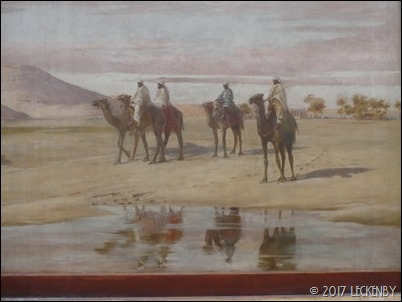 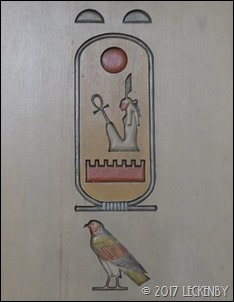 Artist John Somerscales was commissioned to paint murals for the balcony close to the top of the building. For some reason Egypt was decided on as the subject, this was before the tomb of Tutankhuman was discovered in 1922. He visited the pyramids and made watercolour sketches which informed his final murals. Eight large paintings are interspersed with studies of the Egyptian Pharos. Painted onto canvas as he would as a scenic artist in the theatre, he worked on them over a period of four years. The guides couldn’t tell us if they had been hauled up the atrium to the top of the building or whether the canvases had been rolled up and carried up the narrow staircase. 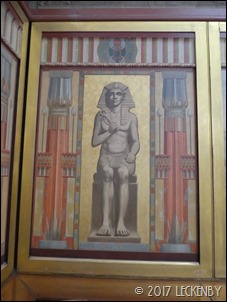 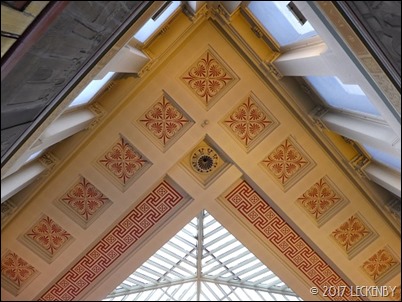 Considering we had an unexpected extra day in Preston it was nice to be able to do something that we’d only have been able to do today. 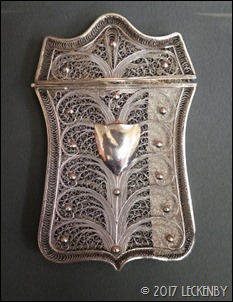 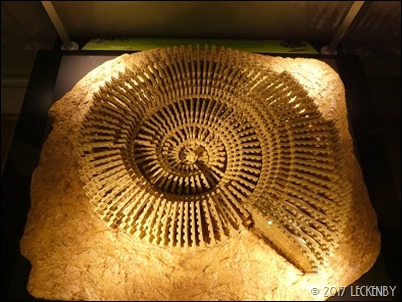 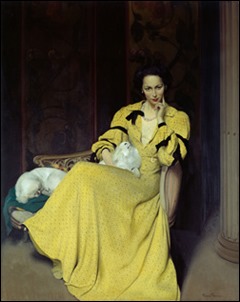 The rest of the day the weather has mostly been sunny but every now and again a cloud burst reminds us that nature will determine whether we get to cross the Ribble tomorrow. Walking back up by Savick Brook the levels had dropped since this morning, we just have to hope that the hills that feed the brook haven’t had too much rain today for it to rise again. The weather report isn’t too favourable for the next few days either.
0 locks, 0 miles, 1 aborted crossing, 5 boats on hold, 1 brook way 2 high, 2nd breakfast, 1 paper girl, 2 buses, 12 only, 3rd floor balcony, 1 stunning yellow dressed painting, 3 teas, 1 coffee, 0 cake, 1 huge pot of pork stew bubbling away.