Our mooring last night had been noisy at times but then very quiet at others. The theme park that is Guy’s Thatched Hamlet had large marquees out the back and we think they were sound checking for the next few days. They are having an Oyster festival, last night there was Irish music and dancing at the pub, today a seafood lunch. Glad we’ve not there over the weekend, I think it’ll be noisy. 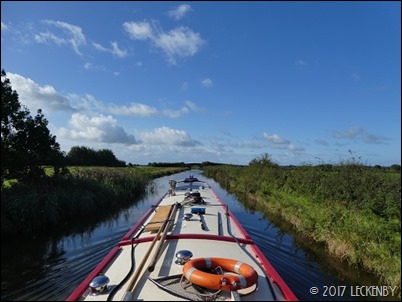 Blackbird pushed over to the services this morning as we headed onwards towards Preston. A mixed day weather wise. Showers followed by bright sunshine. We pulled in at Moon’s Bridge Marina to fill with diesel. The area left free by the pump wasn’t ideal for narrowboats, we didn’t quite fit the gap. However the length of their hose meant that we had to bring the stern to about half way with the bow of Oleanna right across the cut to avoid the tuperware in front, which meant we totally blocked the canal. Luckily the first boat to appear was just as we’d finished and were pulling Oleanna back for me to climb back on board. They came past just as we were about to push out again, which left me fending off, protecting the tuperware and almost falling in. 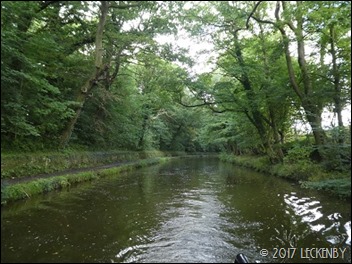 At Swillbrook, where we’d stayed the second night the cruisers had taken over the visitor moorings, glad we’d stopped where we had last night as there was no space for one of us never mind two. On we pootled through showers, the boat ahead still just in view. We’d thought about going right to the end of the canal for me to pop into town before returning to the rendez vous for the link, but we decided to turn into the top of the link and leave me to walk the rest of the way. 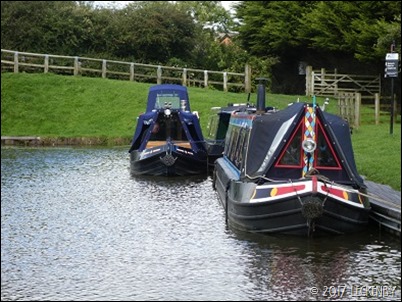 The boat ahead had just moored up behind another narrowboat. There was a possible space on the other side of the basin, but we didn’t think we’d fit, so pulled along side NB Waters Edge and breasted up. It turns out that they live on the High Peak Canal and own the house with Laurel and Hardy in the garden who keep Paddington Bear company. If you’ve ever been along the High Peak you’ll know the garden I mean. Where was Jaffa? When ever we’ve pulled up next to another boat there has been Jaffa. But he wasn’t there! There aren’t even any windows for me to stare through, just green! Bring back my tasty neighbour! 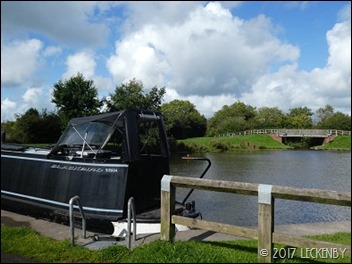 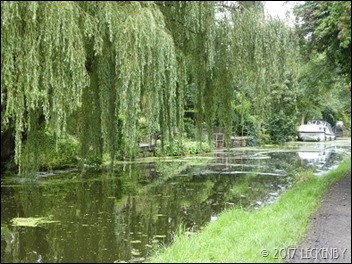 After lunch Blackbird had arrived and whilst Mick attached the anchor and fixed things to the roof Bridget, Storm, Max and myself walked along the canal into town. The canal was far greener than we’d expected. Terraced gardens on the offside and at times a bit too much greenery and mud on the towpath side. The service block and house nearby were very neat and tidy. A short arm spurs off to the south which is full of boats and caravans, quite a nice looking place to moor. Then the canal just simply finishes, stops, no winding hole, just the end. 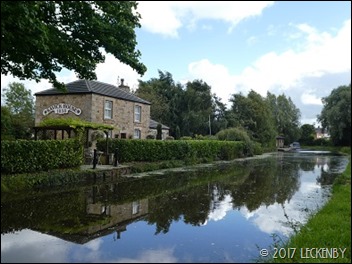 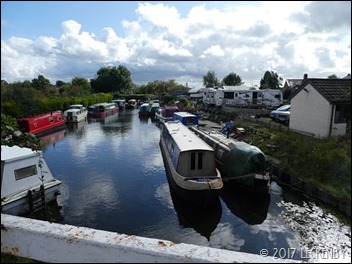 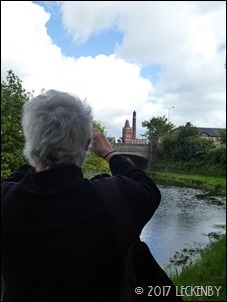 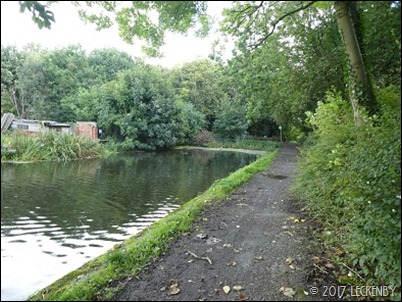 From here we could see Tulketh Mill up ahead, built in 1905 it was one of Lancashire’s biggest cotton mills. By the end of the 60’s however Prestons cotton industry was finished. In 1968 Littlewoods took over the mill and stayed there for 30 years. Then the Carphone Warehouse took over the building for a call centre employing 2000 people in 2007. We walked though some of the university to get back to Abakhan, the fabric shop where I stocked up with quite a bit of fabric for crochet bags and some wool. Bridget was a very good assistant acting as a sherpa as I made up my mind on colours. 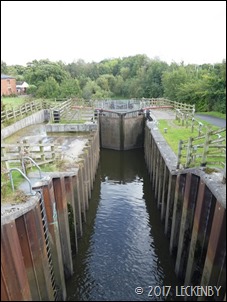 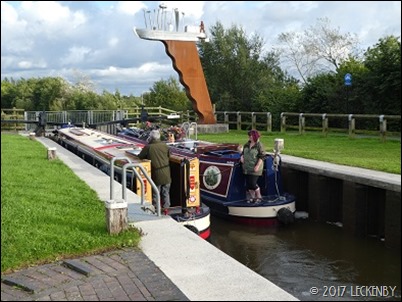 When we returned to the basin there were people standing around the top of the staircase locks. Three boats had done the crossing today and were making their way up the locks. The wind had been quite strong for them out on the river, hopefully tomorrow will be calmer. Apparently there will be five of us tomorrow, still one boat to arrive. The C&RT chaps will be with us at 9am, they will chat with Harry (custodian of the link) over in Tarleton, checking on conditions before they let us down the locks. My escape pod has been zipped together in readiness for tomorrow. I’ve already moved in. Just a few things to bring inside in the morning and we’ll be ready for our crossing to the main land.