Berkhamsted to Pixies Farm Bridge (Christmas Card)
5am is not our usual waking time, but Tilly seemed to think that we all should be up and bright eyed! We were not amused and it took sometime to get back to sleep but when we did we made up for it, not waking until quite late. Oh well there’s no rush an average of 2.45 hours a day will get us into London when we want to arrive. 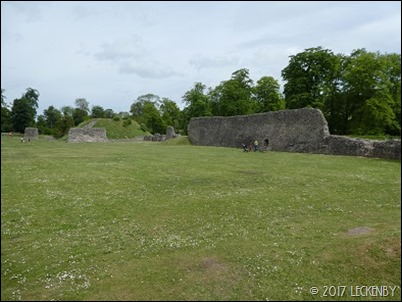 Berkhamsted Castle sits close to the canal so we decided to go and have a look round. Originally built out of timber the motte and bailey was begun in 1066. In 1155 Thomas Becket was granted the honour of Berkhamsted by Henry II, so he rebuilt the castle to show of his new status and to house his large staff. A large flint curtain wall was most probably built then, portions of this still stand today. In 1164 Becket was accused of embezzlement by the King and lost the castle. 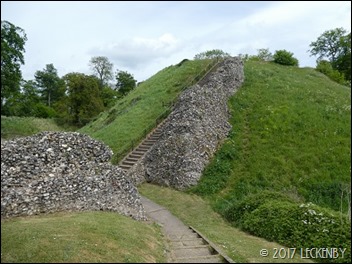 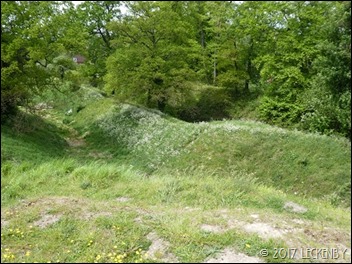 The castle is surrounded by large earth works and water filled ditches to stop anyone from tunnelling under the curtain wall. In 1216 the defences were put to the test as Prince Louis of France bombarded the castle  with huge stones. Besieged for two weeks they only surrendered after orders came from the King.
Richard, Earl of Cornwall was granted the castle in 1225, he repaired and rebuilt it and expanded the western tower to create a luxurious palace, he was really quite rich. The castle stayed in the royal family until it was leased by Elizabeth I to Sir Edward Carey who built himself a grand house to the west leaving the castle to fall into a ruin. 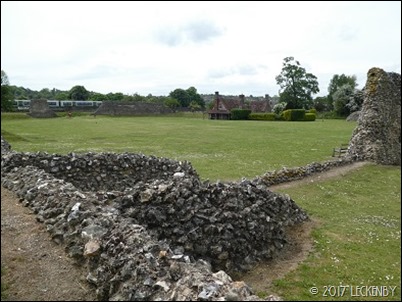 In the 1830s plans to build the new London and Birmingham Railway threatened the castle, but there were concerns over the need to protect ancient monuments and buildings. Berkhamsted Castle was the first building in Britain to receive statutory protection from development, however the route still required the track to pass through the outer fortifications and in 1834 the gatehouse was destroyed. 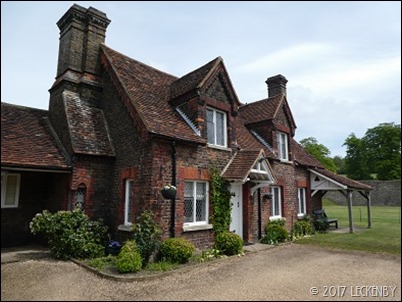 The earth works are huge and the flint walls now surround a large lawn where once numerous buildings would have stood. Instead the 19th Century chocolate box Keepers Cottage now sits in the grounds only missing some rambling roses and a white picket fence. Entry is free and it’s worth the climb up the steps to what was the keep on the motte for the view across the valley as trains hurtle past. I’m not sure that the two ladies we met had chance to admire the view as their personal trainer kept sending them running up to the top of the steps, “We’re paying for this!” said one of them as the younger personal trainer checked facebook pretending to time them. 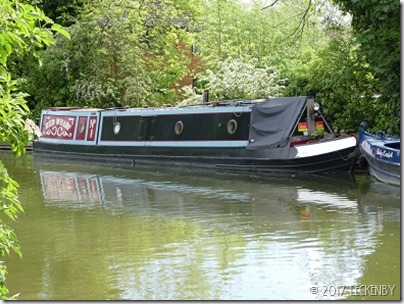 Sam from NB Red Wharf paused to say hello and ask after Tilly as we were having our lunch. Our paths last crossed with him at the bottom of Lapworth when we were making our way to Crick on Lillian. Have a good summer Sam and maybe our paths will cross again. 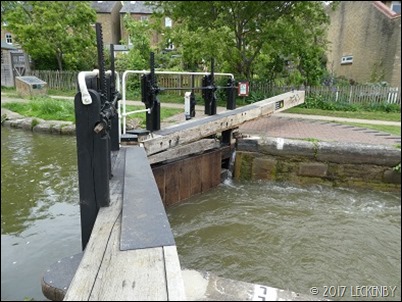 We had to wait for a couple of boats to come past before we could pull out, this would mean that the locks would need resetting for us. No lack of water as we  made our way to Ravens Lane Lock,in parts it looked like it was about to cover the towpath. Here and the lock before have new top gates and when refilling the locks, all paddles open they resonate and sing a note until they are all but a couple of feet full. 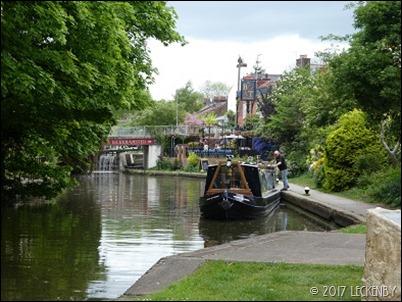 A hire boat was coming up hill and had to wait for us to come down as I’d not seen them until it was too late. The chap I was talking to said they would be heading on through Berko, the chap Mick talked to thought they’d be staying the night. At least I mentioned that Gas Lock was closing in the morning and they could end up being stuck for a day and half, I think they’ll be heading a bit further today.
Back in the land of leaving locks empty again and the boats ahead were leaving paddles up as instructed, at least both gates were closed so it wasn’t too much of a pain to drop them. Here the lock chambers leak and boy do they look like it, chunks of brickwork are missing in places and there are just only traces of mortar left between the bricks. Apparently they are scheduled for routine maintenance this coming winter according to the sign dated 2014. 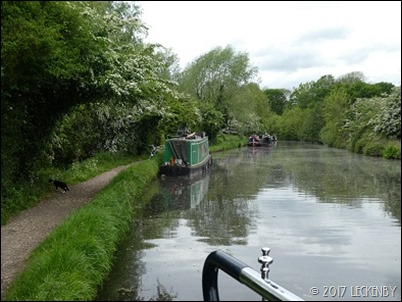 The clouds around us got darker and heavier and there was a distinct feeling that the heavens would open any minute. Luckily we only had a few spots before we pulled up for the day. Our mooring is one we’ve used a couple of times before and featured in our Christmas card in 2014 on a frosty morning, today it is just humid and we were grateful that the towpath was on the opposite side to the side hatch, so we could have it open whilst Tilly went to find friends amongst the watercress.

1 thought on “Resonating Gates. 16th May”