Oleanna was on what felt like a bigger list this morning, maybe the pound had dropped a little overnight. So before breakfast Mick  pushed us out so that we were slightly more level and would be able to keep the milk on our cereal. Outside it was raining and if we’d have been a bit more level maybe we’d have stayed put for the day, but instead we donned our waterproofs and made ready to push off. 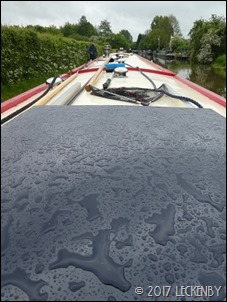 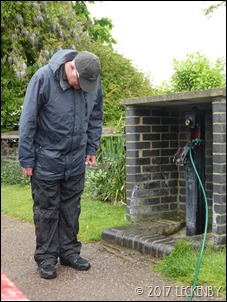 At Cowroast we stopped to fill the water tank. Mick connected the hose and turned the lever, I held the other end and waited for the hose to be flushed out before popping it into the tank. All of a sudden the hose flew off the connector at the water point end producing a horizontal water jet straight at Mick who leapt out of the way. Good job he had his waterproofs on as he was dripping! With the hose more securely attached we continued to fill the tank, the exceptional pressure meant that it didn’t take long which was just as well as another boat arrived to go down the locks. 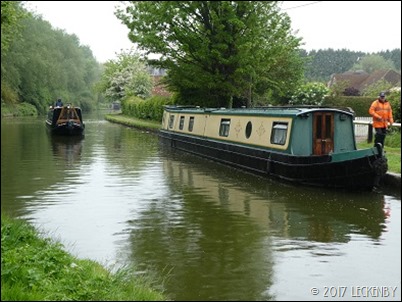 With Oleanna and NB Windruff sharing we suggested to the single hander that I’d open one of the bottom gates for him to exit and then Mick would move Oleanna over to use the same gate. This meant he could stay on board and not have to bow haul his boat out of the lock or climb any ladders and I wouldn’t have to do anymore work than I would if we were on our own. This all worked very well and despite the rain it was a good morning going down hill. 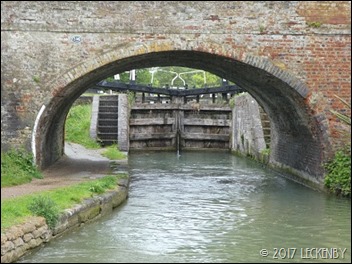 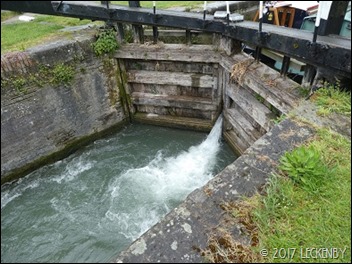 Our aim was to get past Gas Lock 1 which is closing for a day and a half this week so that they can reduce the water loss on it. Many of the locks on this stretch you have to leave empty. Either because the water in a full lock can seep through the chamber walls and flood nearby properties or because the bottom gates leak so much that if the top gates were to open over night a hole pound could gradually empty. Going down hill leaving them empty is easy, leaving a paddle up will keep them that way. 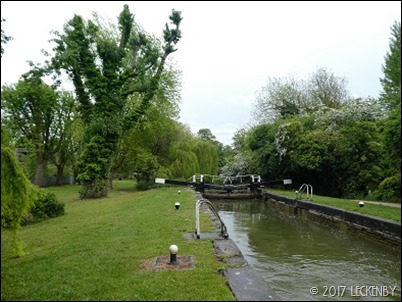 The route into Berkhamsted is full of willow trees and really quite pretty. Just a shame that the west coast main line runs next to it with it’s speeding trains all day. Down the last lock into Berko and we pulled in waving our companion goodbye. There was enough space for us on the 14 day moorings before the new 4 hour shopping mooring.

As we were leaving to go shopping NB Books and Spud was just pulling in. A boat in front of us had moved off since we’d moored making it look like we were hogging two spaces, so we nudged ourselves back to give them enough space to be on the 14 day mooring. We were just tying back up when NB Chance passed heading up the locks, they are another blogging boat that is for sale at the moment. 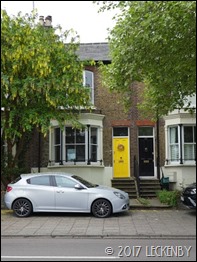 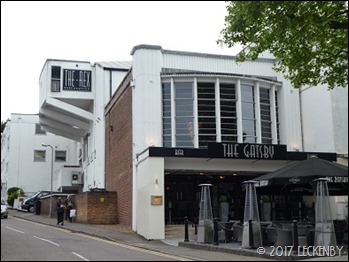 A walk around town didn’t find us a hardware shop, but the craft shop behind Waitrose came up trumps with some felt and cotton tape to put loops on our towels now that we have hooks. A few purchases from Waitrose, I had taken the time to adjust ‘My Picks’ before going so that our shop was cheaper than it would have been elsewhere and we got a free newspaper too.

I’ve spent the afternoon looking longingly out of the windows. It looks brilliant here, plenty of friendly cover, trees and sideways trees, but they wouldn’t let me out! Something to do with a big boat pecking Dad swan that wouldn’t leave us alone, I’d have shown him! That and his babies were exactly the reason she wasn’t allowed out!