No way! Is what should have been said this morning. The weather forecast had suggested light rain this morning followed by heavy rain this afternoon. The volts meter on the battery monitor was low so we needed to run the engine no matter what, so it might as well run as we moved along in the light rain. 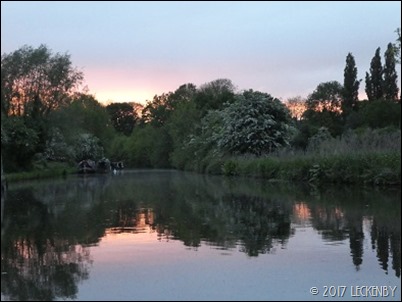 The first lock of the day was full, even though it should have been left empty, and we arrived at the same time as a widebeam who was wanting to come up. He climbed over the bottom gates and worked the paddle on his side to help us down. As Mick was pulling Oleanna out of the lock the chap warned that there was another widebeam on it’s way. Here there are quite a few moored boats and the widebeam met us just where the canal bed was too close to the top for us. They hung back to let us pass, but we were well and truly stuck on the bottom so we waved them past. Standing on the port side, forwards, backwards, pole pushing, eventually we worked our way free and could carry on.

Here was our first lock with both the gates left open, we’ve got to get used to this now we are within 30 miles of London! A short distance on was Winkwell Swing Bridge which often has problems remembering how to operate. Today in the now heavier rain it behaved itself lowering it’s barriers and swinging out of the way for us, it also remembered how to close up too. 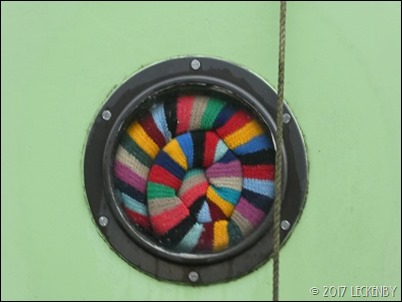 The next lock had been left empty and we timed our arrival along with a narrowboat from below. We exchanged comments about the rain as we both stood and waited for their boat to rise. They were on a mission to get to Worcester in ten days having left Tottenham two days ago. The closed lock just north of Berko would give them a short day today which I think was a relief as they were both quite soggy.

By now our waterproofs were just holding water not repelling it. So we decided that if we could get into the side below Fishery Lock then we would call it a day there and not carry on further into Hemel Hempstead. With some of the ground paddles leaking  I had to re-open the offside paddles to be able to open the gates which all took extra time and meant we were absorbing more rain. Holding onto the railings to cross the gates I wasn’t sure if the water pouring from my hands was from the railings or my non-waterproof-waterproofs.

Once down Fishery Lock we stopped under the wide road bridge for me to take off my coat and head inside. My waterproof trousers weren’t going to come off until I was inside as there were no trousers underneath them! Mick stayed outside and valiantly moored us up for the day. We wondered what the rain would be like later on if this was meant to be light showers!! 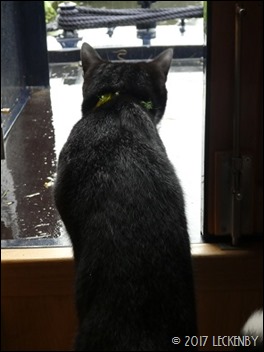 Tilly as always was keen to be outside as soon as we moored up, we certainly had no plans on heading out for the afternoon, so the back door was opened up for her. She jumped onto the roof, jumped down onto the stern and returned inside all within a minute. What has happened to our rain loving cat? No way was I going to go out in that stuff! What were they thinking of moving the outside to a wet place!!

The rest of the day we’ve been sheltering inside, pottering. The bedding has been changed, which led to a discussion about Ikea bed sizes and UK bed sizes. The new sheet we bought the other day is 2m long,, UK beds are 1.9m long and our cross bed mattress is 1.8m long. Even if we had a UK sheet it would need shortening. Then the duvet cover was too long, that one is easier to sort out though and I’ll wait for it to have been washed first in case it shrinks. 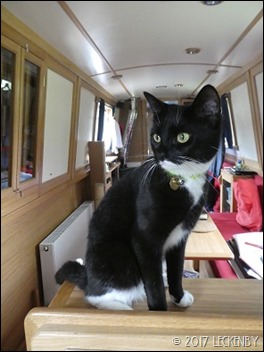 One of the jobs today was to email Ricky at Finesse with our up to date snagging list. He beat us to it by calling us for a catch up. They are still waiting for a new cooker top to arrive and had emailed the battery people earlier today for an update, which he hadn’t had a reply from. Our list has been amended and emailed to them, so that anything that needs prep work doing can be sorted before they come out to us.