Over breakfast we decided to do a big shop from Morrisons and Aldi before seeing if we could get a night in the marina, the low wall mooring meant that we wouldn’t have to carry our shopping over one of the two bridges. However very soon afterwards, as we were still drinking tea the wide beam from the end of Kiln Pontoon slowly cruised past us. What to do? Do the shopping then move over to the free (in more than one way) pontoon, but risk the space being taken. Do the shopping then see if we could pay for a night in the marina and get several loads of washing done. Or move over to the pontoon and carry our shopping that bit further. There was another factor that came into it too, it was Wednesday, a good market day in Newark.

Once our mugs were empty we untied, pushed off and drifted backwards to then bring Oleanna into the end space on the pontoon. If we end up with a couple of nights at Cromwell hopefully the electric posts there still work and we’ll do the washing there with the view rather than other boats and a scrapyard. 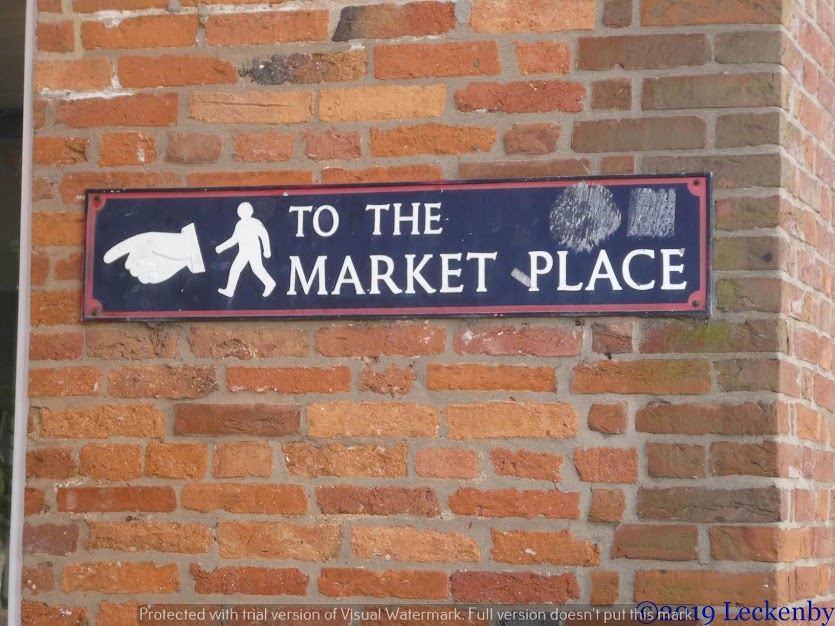 Time to get into town for the market. When we wintered here Wednesday was a very good market day, plenty of stalls the best one being DIY hardware. 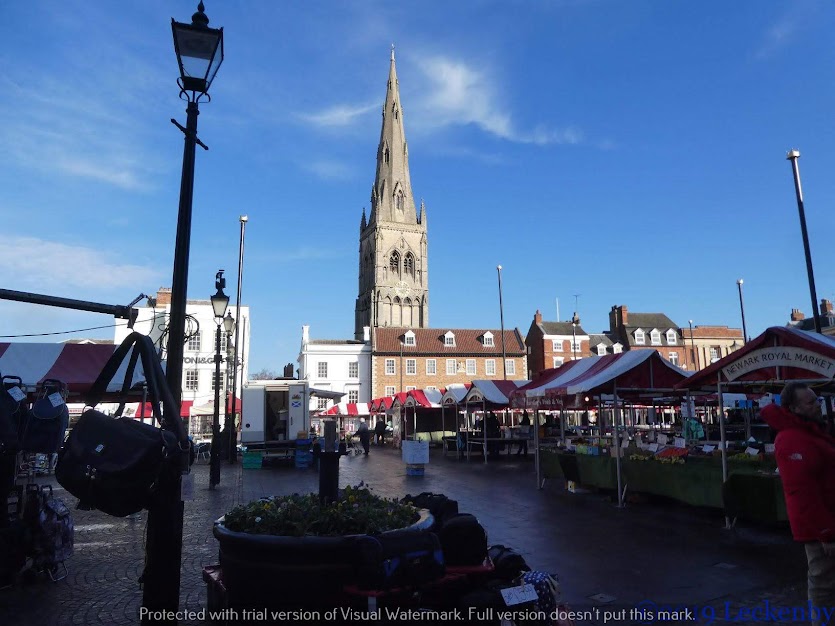 We followed our route into town and down through the snicket to the market square. Three years ago the snicket would bring you out at the DIY stall, but today there were on stands there! Had it gone? The market didn’t look as full as normal, plenty of empty stands, only one fruit and veg, one fabric, the flower stall I bought our Christmas tree from, slippers a gogo. We had a good wander round and there in the middle was the large array of boxes of all sorts of stuff, DIY heaven still existed! 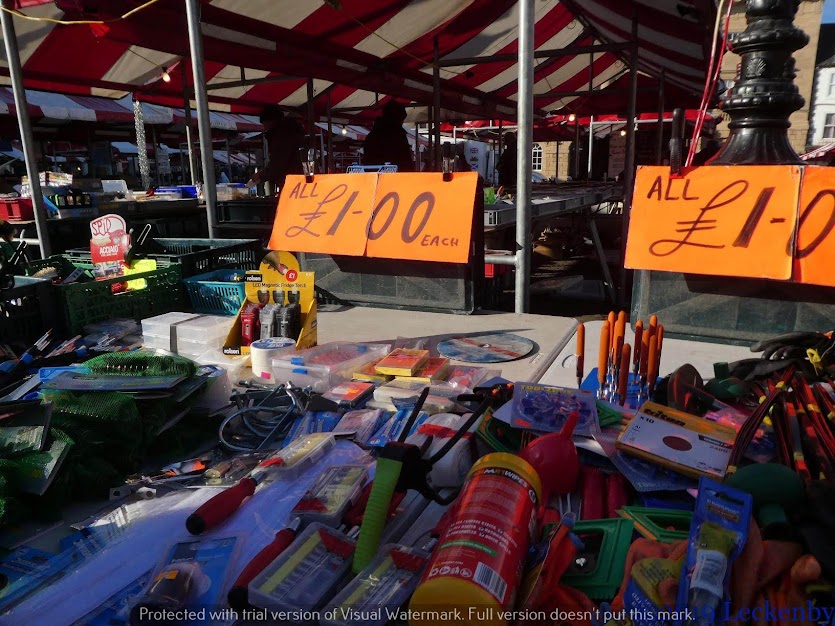 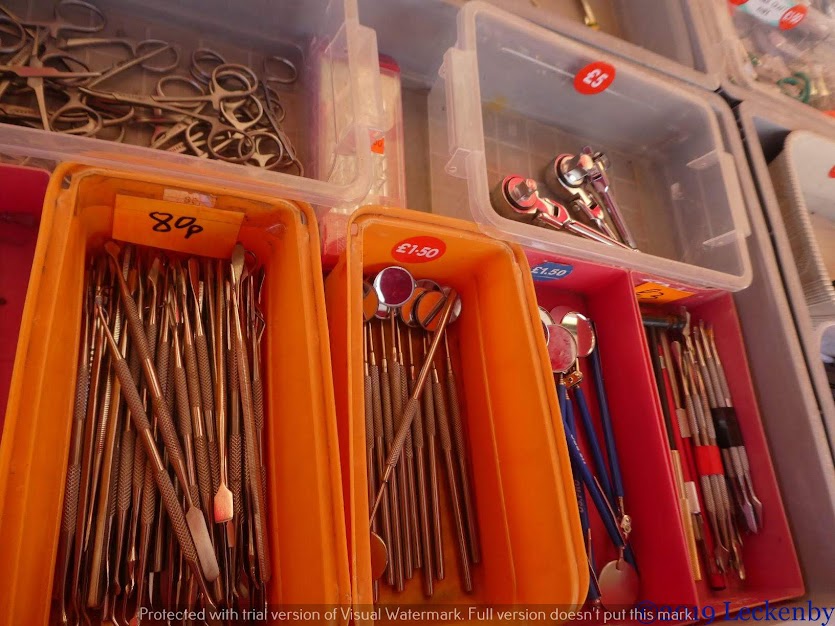 Fully absorbed for quite sometime we both took note of everything, trying to think of reasons why we had to buy things. Two old chaps with beaming smiles rootled their way through boxes of stuff. I couldn’t list everything as there is so much. 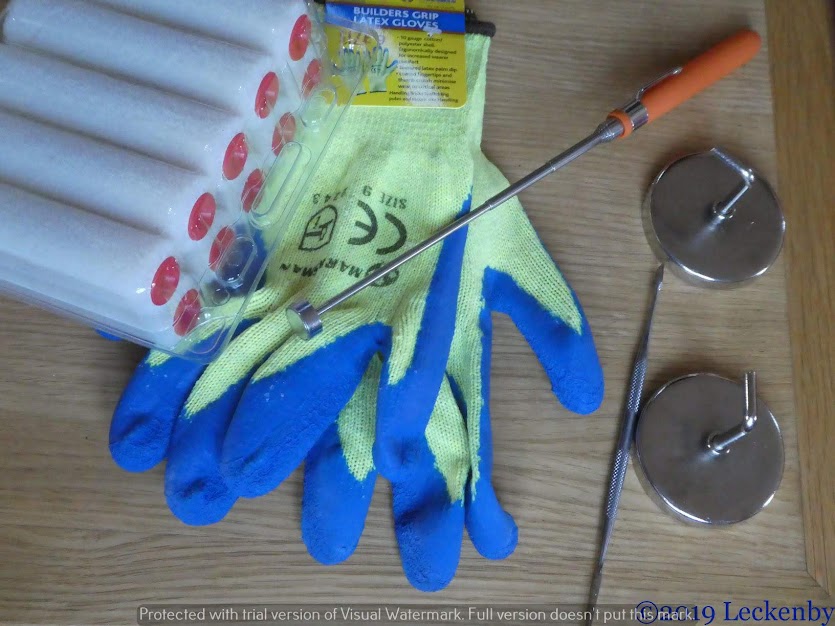 We walked away with a few purchases, happy to have been here on the right day. A pair of grippy gloves for Mick, a telescopic handled magnet (for when something gets dropped in the engine bay), a tool that I can use to help scrape sticky stuff off narrow places, 2 large magnetic hooks which I’m hoping will  help to keep the pram cover down on the cabin roof whilst cruising on windy days. 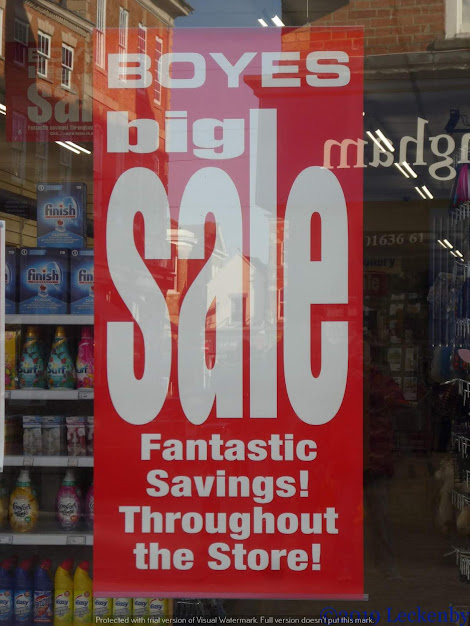 Next port of call was Boyes. A good look round, sadly we won’t be here on Friday when their sale starts, the queues in Scarborough on sale day used to start well before dawn. They had engine oil at a good price, but as the next service isn’t for sometime Mick refrained from carrying two bottles back. I got some reasonable roller sleeves with the hope that one day soon I might just be able to touch up the gunnel I prepped in Cropredy back in October. 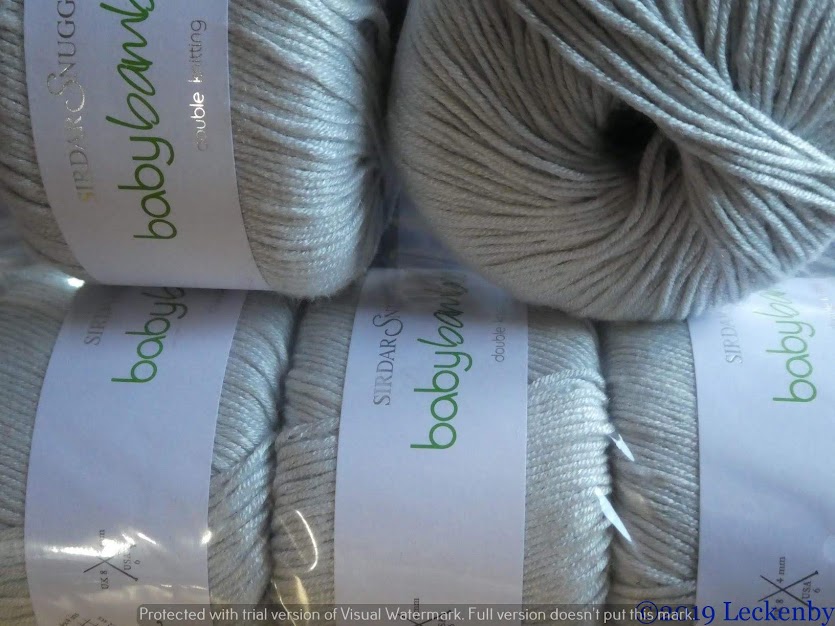 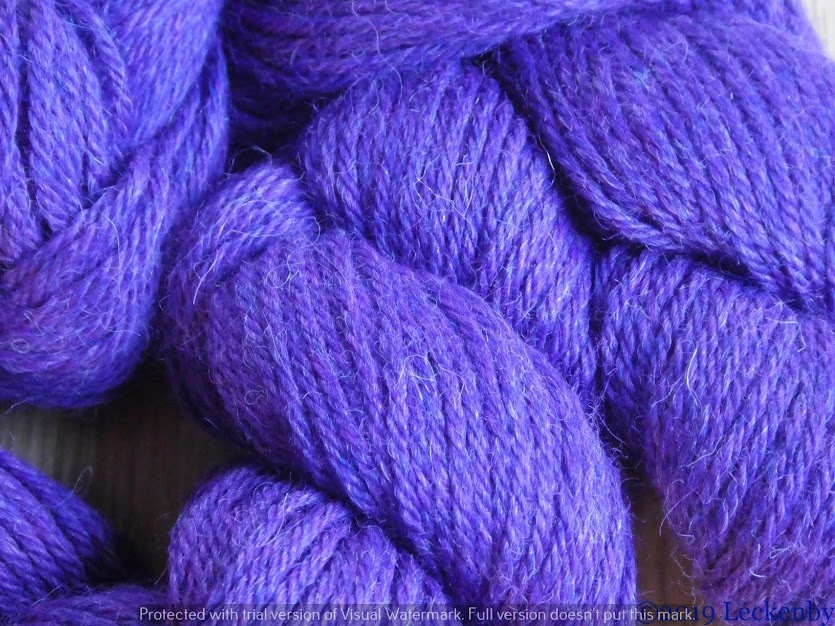 A wool order was sat waiting at an Off Licence up the next street. I’ve a couple of commissions to do so now I’m all stocked up with Alpaca and Bamboo yarn and a long cable for something big. 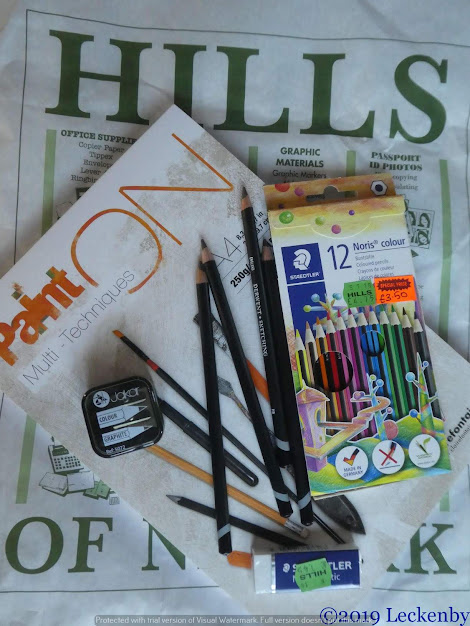 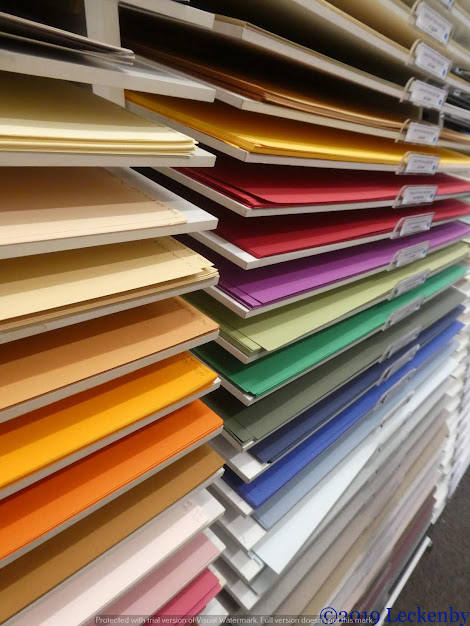 Further along Barnby Gate is a very good art shop. Next month I’m doing a days sketching and have a budget for materials, so I had a good look round and furnished myself with new pencils, paper, rubber, sharpener and some reduced colour pencils, a full sketching kit. I just now need to do some practicing as I haven’t sketched for quite some time!

Our bags were getting full, so we decided to call into Morrisons for a few bits for tonight and leave the big shop for tomorrow. 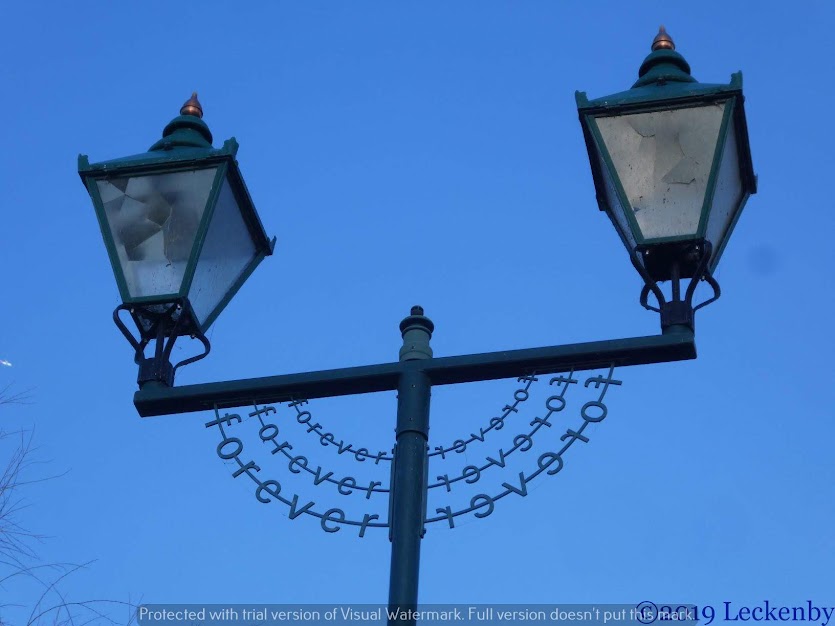 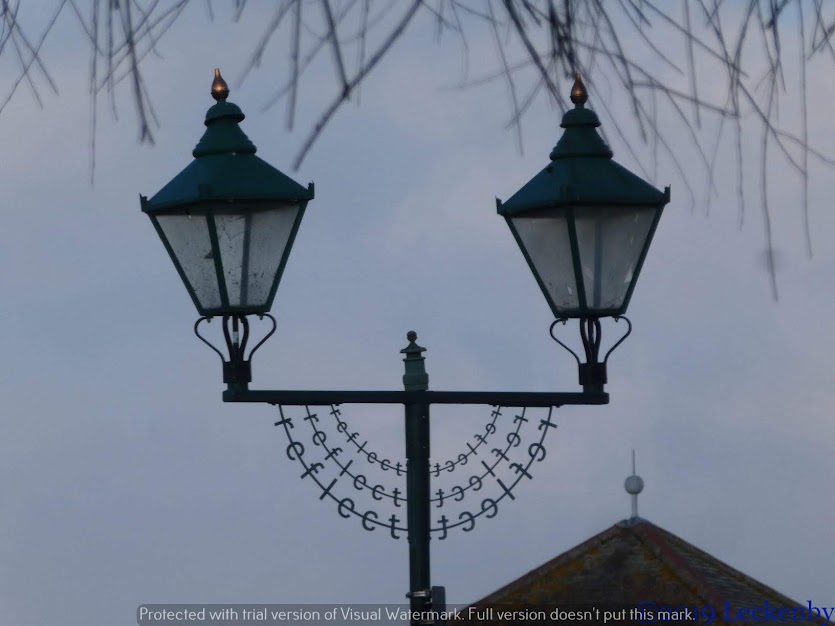 In the afternoon Mick gave Newark Marina a call to see if our life jackets had arrived. They had so we walked along the river to collect them. The park opposite the castle has various sculptures around it, but what I’d not seen before were the words on some of the lamp posts. Maybe the lack of leaves brought them to my attention. The ponys in the field on the way didn’t bother coming to say hello as we weren’t the postman who brings them apples on his round.

Our three life jackets were sat waiting for us, each with a certificate to say they were good to go for another year. Now we have five life jackets. We’ve decided that we’ll keep our original two as spares and for visitors, but we will sell the fifth one. 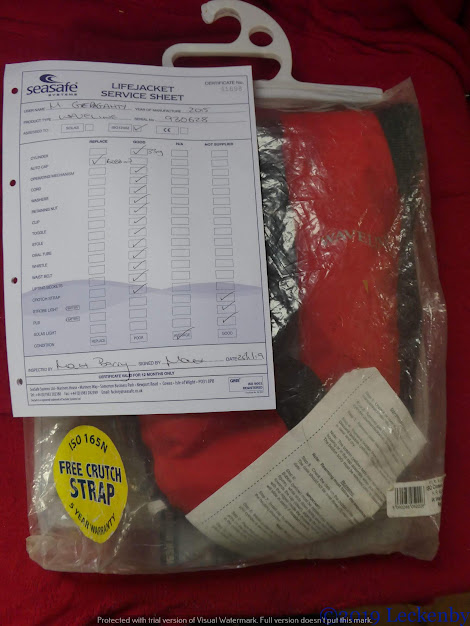 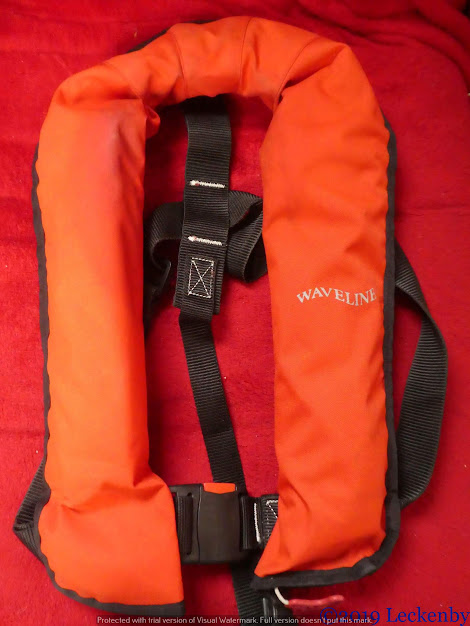 So if anyone is interested in a Waveline auto-inflate life jacket made in 2015 which has just been serviced and good for a full year, let us know. It is not in pristine condition as it’s three years old(Average on the certificate), but will do the job. A new one would cost £50/60. Yours for the price of the service (£20) and postage (£3). If we have no takers in the next couple of weeks I’ll pop it on ebay. 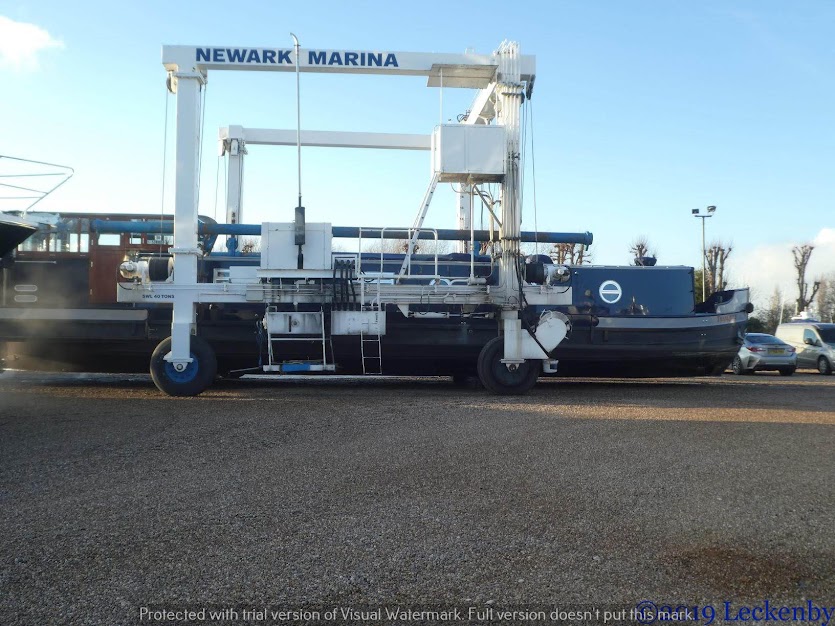 This post still brought to you by Toms third work around. But does it still work?

5 thoughts on “Wednesday Market And Too Many Life Jackets. 30th January”