Sadly Tilly was mistaken thinking she’d be allowed back out for further exploration today, I suspect she won’t get any shore leave until next Sunday afternoon and that depends on how we get on with the Tidal Trent.

Not far to go today to our chosen mooring, but we wanted to get going as soon as we could as rain or snow were forecast for the afternoon and we all know that the world stops for a dusting of snow. Yesterday Mick had walked back up to the lock to check on levels. These Trent locks don’t have the red, amber and green boards but they do have heights marked. When we moored here on Lillian I remember having to sit on the bottom step to clamber down onto Lillian’s bow, yesterday Oleanna’s gunnel was just about level with the step. This morning the level had dropped 12cm. We’ve been keeping an eye on Gaugemap and the reach we are in suddenly went up the other day by about a foot, possible low lying flooding, but as the Lockie hadn’t said anything yesterday we decided that we should be fine. 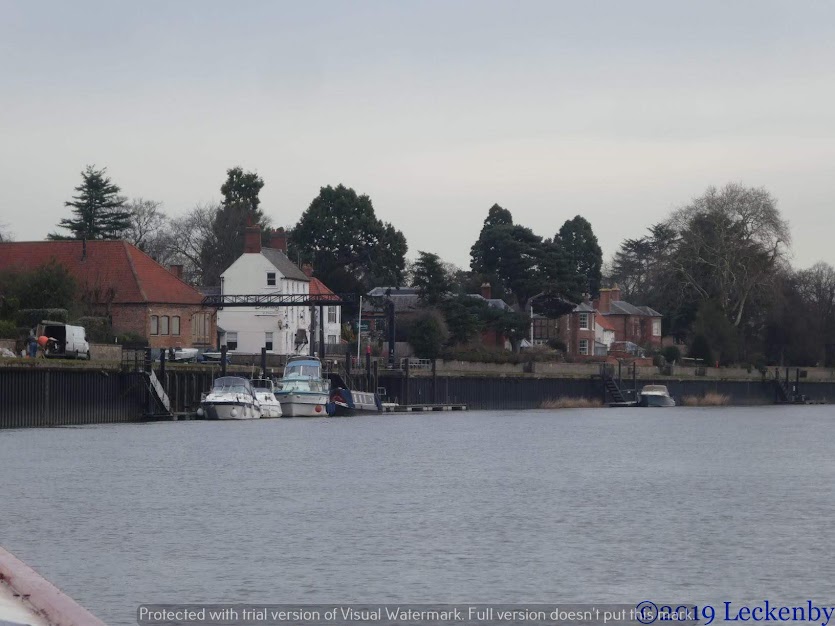 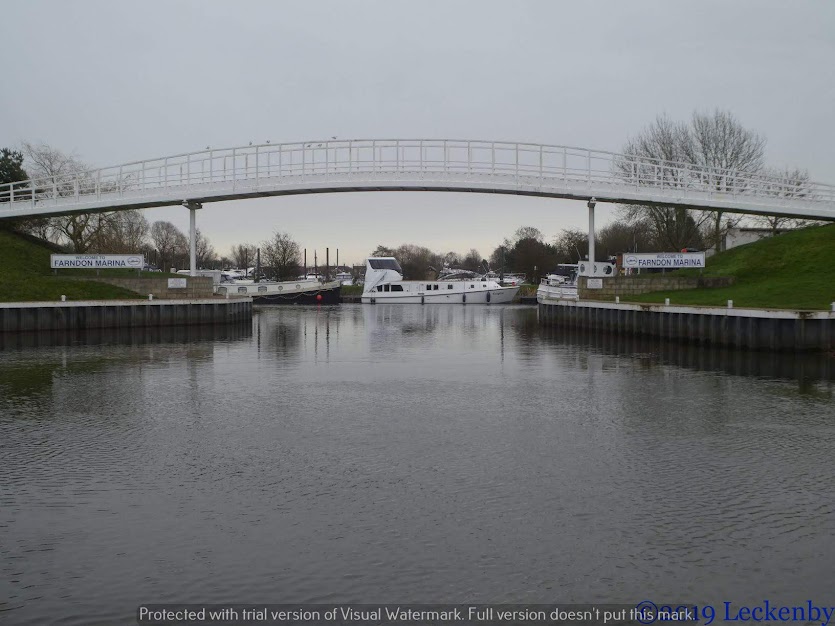 Down stream we passed Fiskerton, we were moored here when we last saw NB Quaintrelle a little while before they headed off to France. Nobody to wave to today and plenty of mooring outside the pub. Next was Farndon Marina, the 72 hr mooring was empty but we carried on. There are very large cruisers in the marina, one looked like it had a driverless car on the roof  at the stern. 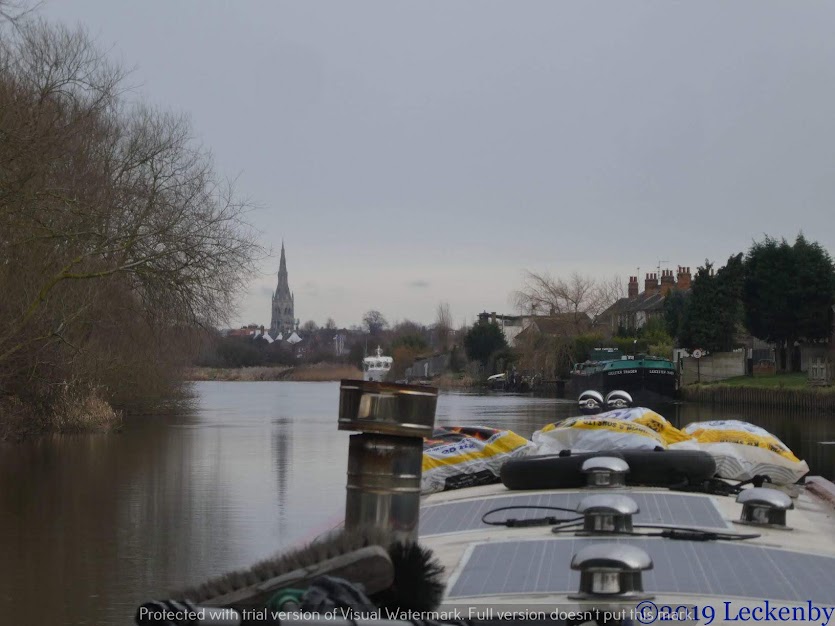 Staythorpe Power Station came into view, gas powered with pathetic cooling towers, that’s if they can be classed as such. We need to get further north near Torksey to see proper power stations. Staythorpe is soon followed by the large Averham Weir, today only one cormorant perched on the crest. Then the steeple of Newark Parish Church of St Mary Magdalene peeked up from behind some trees. As Braunston means Bangers , Newark means caramelised red onion sausages. It is these Newark sausages that mean that my nephew Josh has never eaten any other flavour since they visited us back in 2015. Here’s hoping the butchers does gluten free versions. 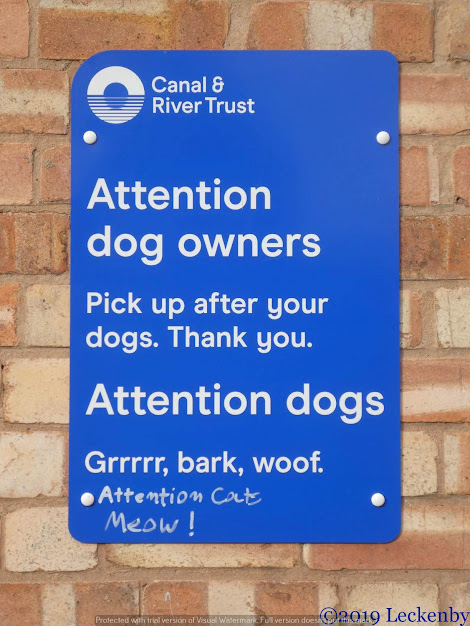 Please let me translate this for those who don’t speak Meowese. ‘Attention Cats. Free Dreamies here!’

At Town Lock the level was with us so I went to open the gates. Because the lock gates are part of a public footpath they have flashing red lights and a ladies voice at each gate telling you to ‘Please keep clear of the lock gate area’. I thought there was no point in opening them fully so took my finger off the button once the gap was wide enough. The lady carried on with her instructions. On pressing the close button the near side gate did as requested, but the far side stayed put. I released the button and tried again, no joy. The lady on my side had now got bored and shut up. Would both gates open? Yes, so I kept the button pressed to go all the way, then closed them successfully, the lady having woken up again to continue repeating her phrase. 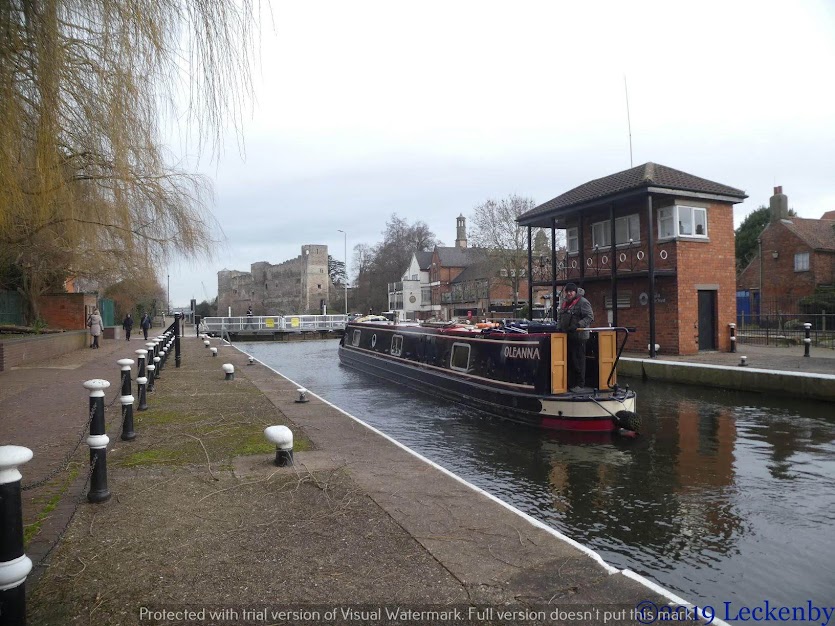 I started to empty the lock, the ladies now at these gates having chance to stretch their vocal chords. Paddles up and Oleanna was on her way down, only Mick called over to me, there was water coming in from the top paddles. Admittedly I hadn’t checked that they were down before closing the panel at that end. So I closed the ones at the bottom, closed the panel and returned to the top gates. One yellow disc was down, these indicate the state of a paddle, but despite being yellow they can be hard to see. The near side disc was at the top, I pressed the required button as the ladies started again. The disc stayed put, was the paddle stuck in the open position? It was hard to tell for a while. I kept pressing the button, still the disc stayed put. Until it dropped! By now it was obvious that the paddle had closed below the water and I could start to empty it again, swapping the top gate ladies to the bottom gate ladies. I made sure I opened the gates fully as Mick brought Oleanna out and made sure I’d closed the paddles too. 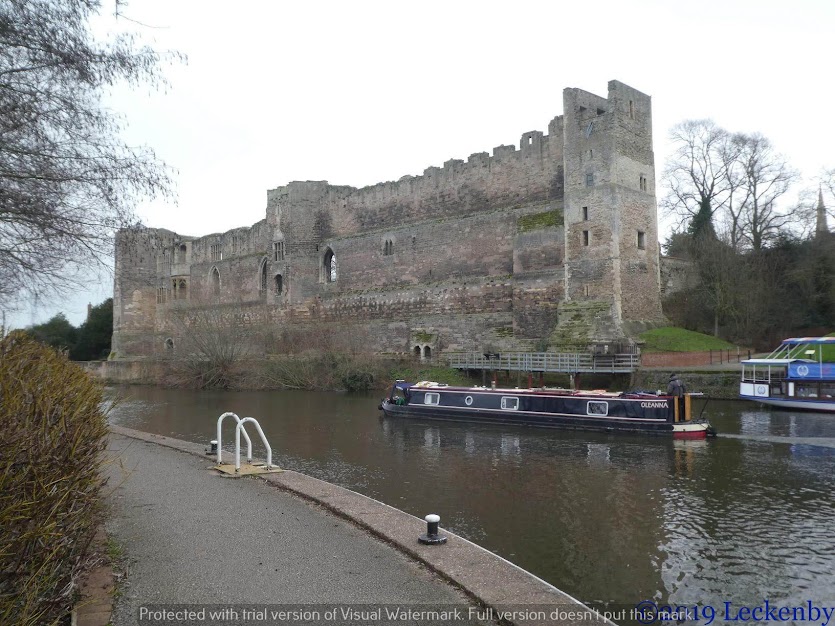 The flow was too strong for Mick to be able to pull in and pick me up so I walked to the pontoon where we hoped to be able to moor. Unfortunately there was no space, the gap NB Seyella had found a week or so ago was filled by a wide beam. Mick managed to manoeuvre Oleanna to pick me up from a fishing peg just beyond the pontoon. We decided to see if there might be space in Kings Marina for a couple of nights, it would cost but we’d be able to do some washing. Pulling into the marina there were very few familiar boats from when we moored there for three months 2015/16. We pulled in at the service pontoon and walked up to the office to find it closed. A nice lady who is wintering there suggested we pull into a free gap, stay the night and check in tomorrow. But access is only with a fob for the gate, we could borrow hers. This was very nice of her, but we decided to head back out and moor on the low section of wall near The Castle Barge, a big step up onto the path but it would be fine for a night.

As we finished our lunch the heavens opened and stayed that way pretty much for the remainder of the afternoon. My parcel of wool could wait till tomorrow, I still have quite a bit to do on a balaclava for Mick. Early evening we headed the great distance to Pizza Express to make use of a 2 for 1 voucher. We both had a new flavour pizza each, I had a Ragu and Mick a Carbonara. They were both very tasty and mine may have been the best gluten free pizza I’ve had in one of their restaurants.