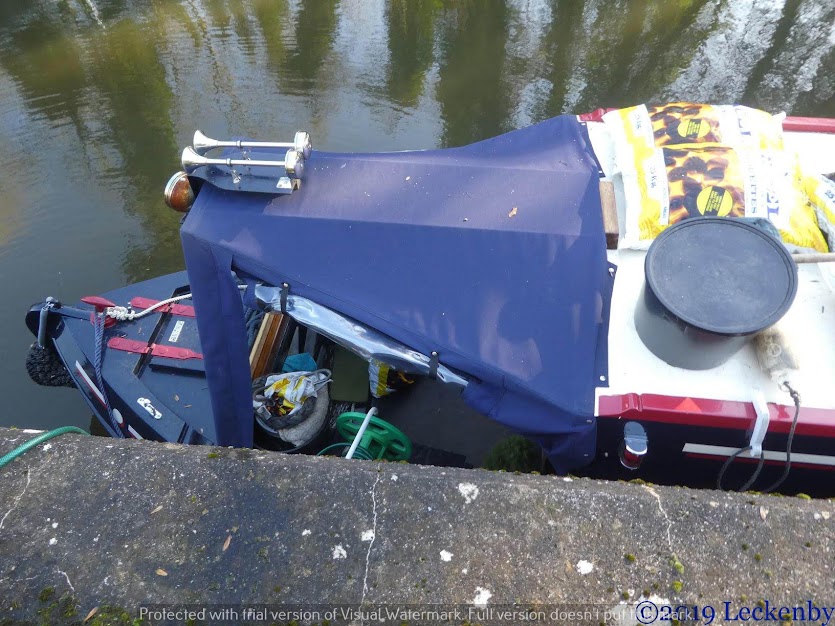 With the winds now much receded since yesterday we wanted to be on our way. First though the water tank. I walked whilst Mick brought Oleanna, pulling up the lock cut almost to the lock gates. Here the top of Oleanna is lower than the land, so the hose had to be passed up and our latest offerings in the pooh bucket had already been put (still contained in said bucket) on the roof for ease. As I turned the tap on we could tell we’d be here for some time, the pressure just as bad as back at Meadow Lane Lock. 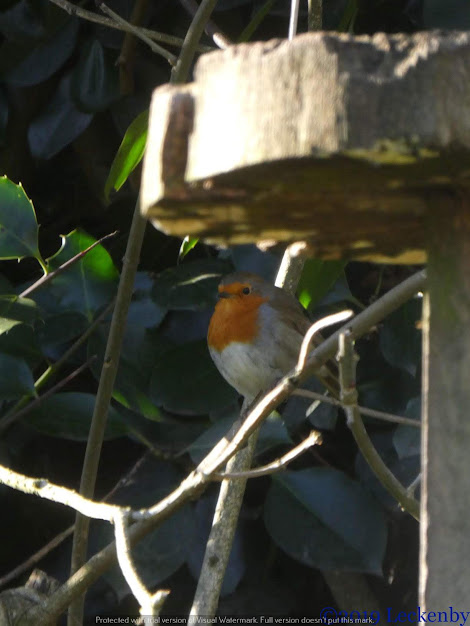 There was time to do a couple of other chores and to watch the local Robin fending off other birds at the mound of seed that a walker had left just for him! That was until the pigeons muscled in, by then the Robin had lost out as he’d been so busy defending the seed he hadn’t even had a peck at it! By the time the tank was 3/4 full we were seriously bored and getting a touch chilly, this would do us until we reach Newark or Cromwell, washing could wait. 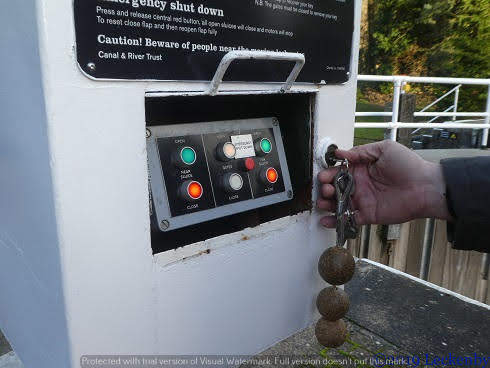 Key of Power in hand I opened the gates and closed them behind Oleanna, waited for Mick to pass a rope around a (hated) blue riser and be settled in the lock, then the Sluice buttons are pressed. Going downhill you can lift them straight up, up hill you need to take care as the turbulence can have your boat going all over the shop. Gates open, sluices closed and we were back on our way.

The blue skies were still with us today, reflecting in the river giving everything that look of glorious Technicolor, vivid greens and blues. The banks of the river are low and it really was lovely to be out there on our own with flocks of geese, tufted ducks and gulls taking off as we arrived, swooping against the brilliant blue sky catching the sunlight. Just a shame there was a head wind which chilled our faces despite the bright sun.

The first wide right hand bend took us past Burton Joyce. This is where we adopted Tilly from almost three years ago, I waved at the nice lady high on the hill, she used to give me loads more Dreamies than Tom and She do! 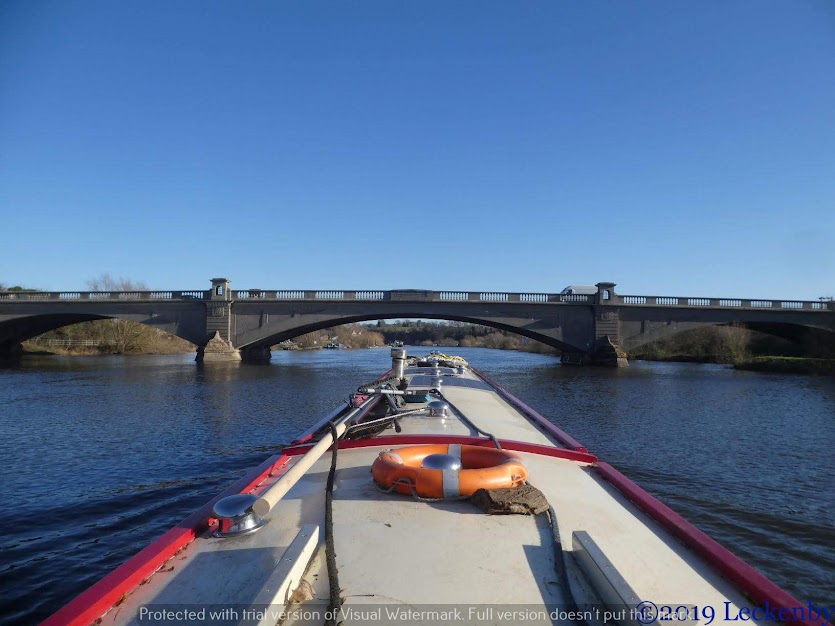 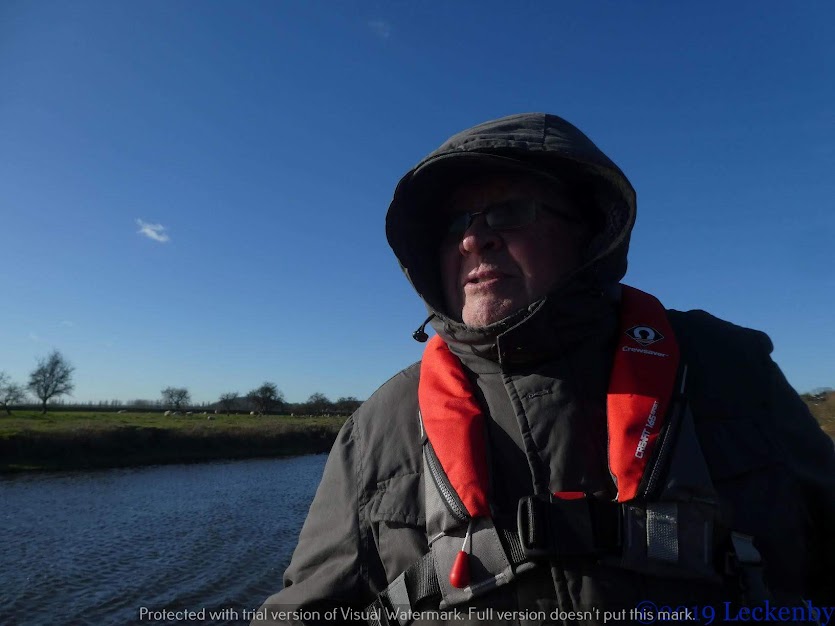 A few more bends and Gunthorpe Road Bridge came into view, one boat on the visitor pontoon today, we wouldn’t be joining them.

The flow on the river seemed stronger today and pulling in at the lower ladders for me to get off was a little bit tricksy as Oleanna wanted to carry on sideways, so extra assistance was needed from the bow thruster to loiter just long enough for me to get up the ladder safely. 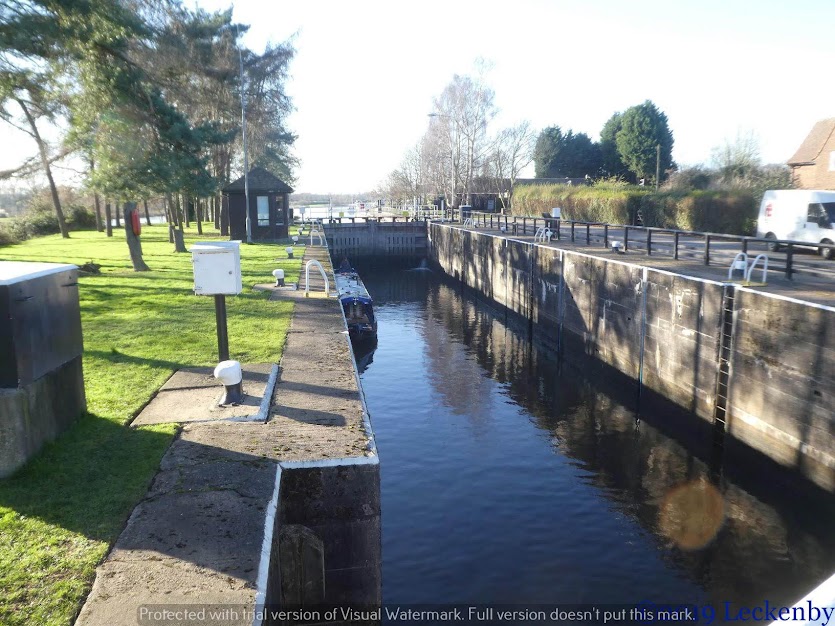 There is no other way for me to say this other than I HATE this lock, it makes me very uneasy. I’m sure if we came through more often I would become blazee about it, but not today. My heart beat rose and at the top gates I couldn’t find the control panel, that was because it was on the other side! (I already knew it was there) With the gates open Mick brought Oleanna in and pulled up against the off side of the chamber. I think this was better him being this side, but it did mean that I could see the offending blue riser that altered my right hand forever. (Link) 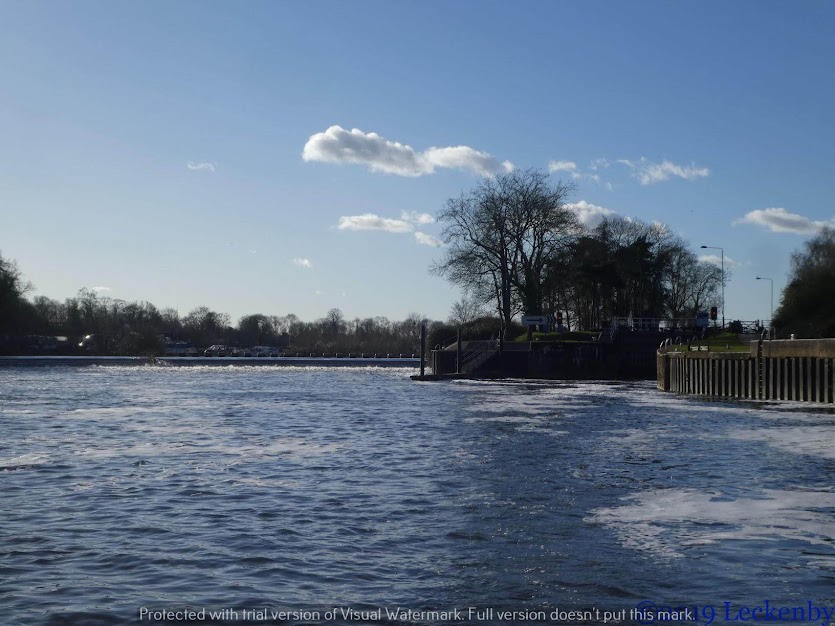 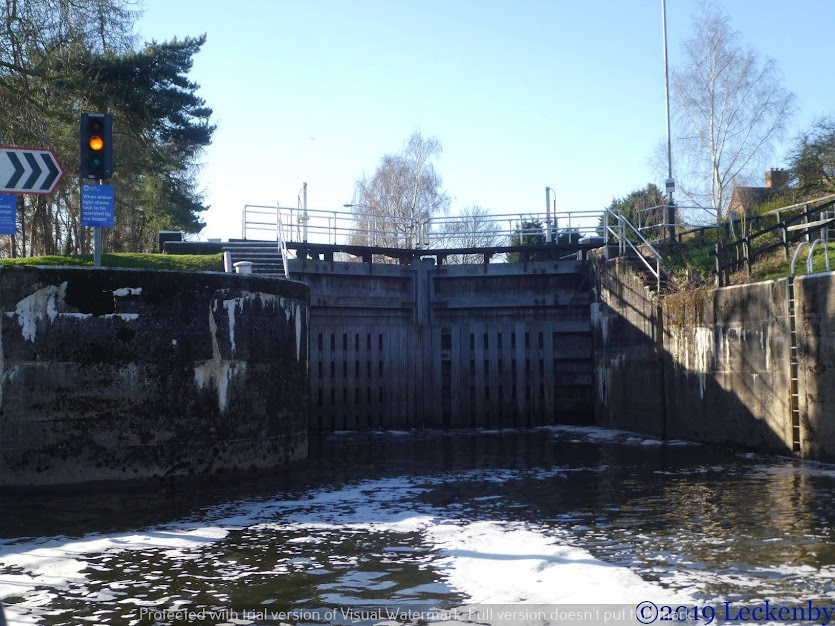 I took a deep breath, turned the key and pressed the buttons, having to step onto the walkway on the gates to check all was okay below. Gongoozlers watched from the towpath, I have to say I was very glad they couldn’t talk to me as I don’t think they would have got a response.

The lock landing/pontoon is on the weir side of the lock entrance, so the force of water makes it very hard to pull in. Mick had held back nearer the gates until he saw me, then popped out to pick me up. Gunthorpe Lock done and I still had  what remains of my digits. 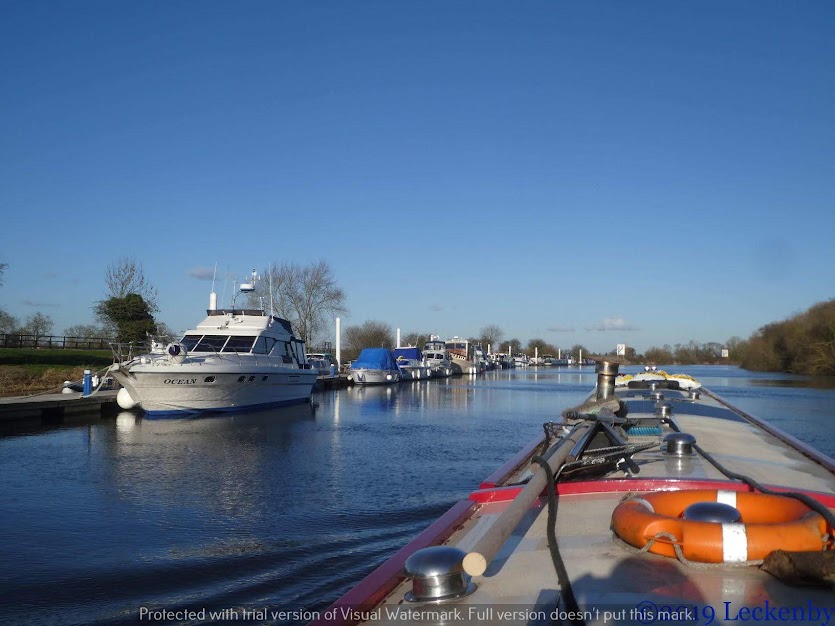 The next five miles of zoomy river pootles took us past the newish pontoon moorings, now fully occupied. Past the route to the first weir at Hazelford and on to the lock with the other noisy weir alongside. Approaching we could see a red light, indicating someone was on duty. Mick radioed, but there was no answer. 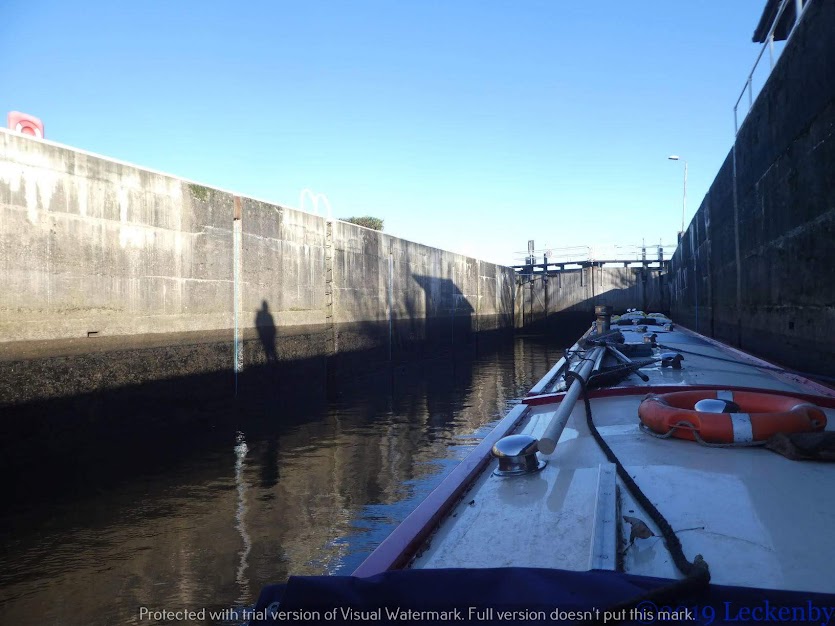 We could see someone at the far gate, only one thing to do, beep the horn. This brought the lady rushing back to the control room to open the gates for us. Then as we descended she came for a chat. We were her one and only boat of the day as she pottered on with a few jobs at the lock. A very friendly lady. 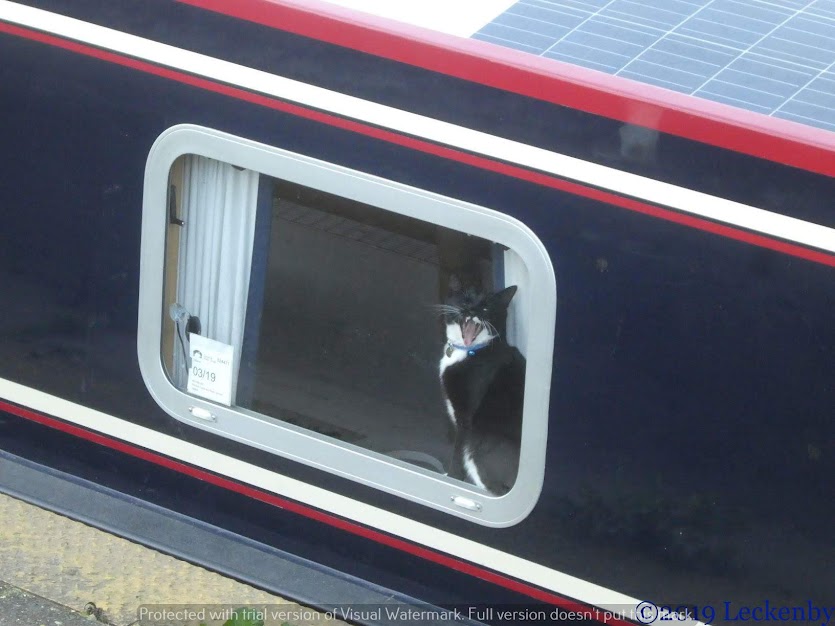 We pulled up below on the low wall. There was just enough time for Tilly to have a good look around the island. She was a touch eager to get out despite the immediate outside looking a lot like Nottingham County Hall steps. 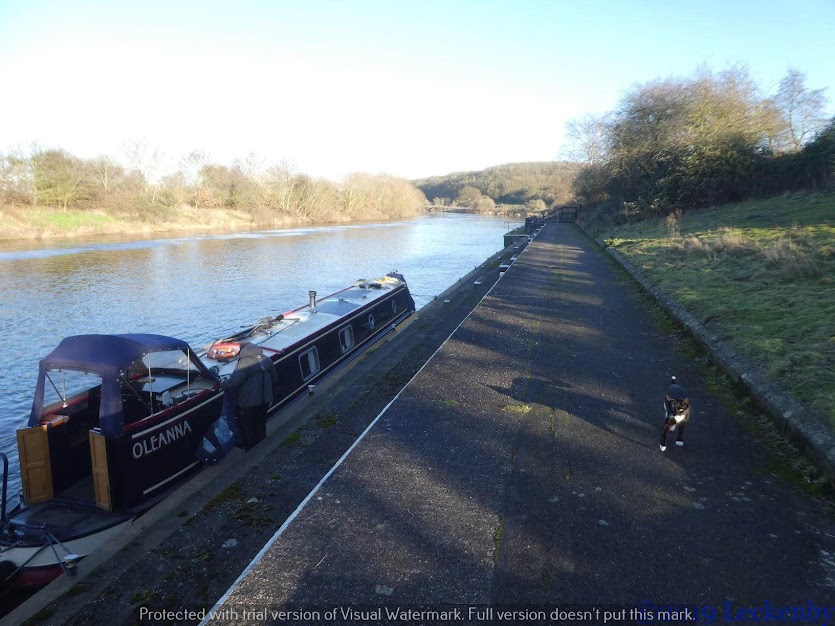 They looked very different, not quite so clean and had big white lines painted on them. There was no problem reaching the top. TREES!!! Friendly cover, all be it a touch spiky. What a great place, Naughty-Cal you were right, a great place to run around like a loon! She recited the river rules and I was given an hour and a half, but She wanted to see me 50 times! 50!! I managed four and came back bang on time. They’ll keep this outside tied up tomorrow so I can explore further. 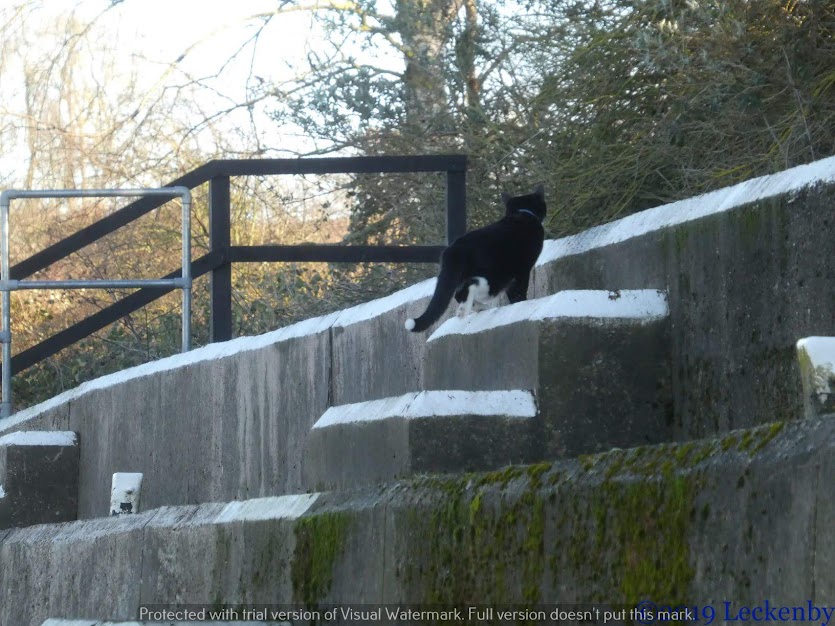 A phone call to Keadby to check on bookings for the weekend was worth doing. We’d been warned that they were hoping to have some dredging done near the lock mouth on the river, last week we’d received a C&RT notice about it too, but chatting to the Lockie he mentioned that work hasn’t started yet. He suggested that we should do the journey on Sunday leaving Torksey at 7am (just light). We’ll have to punch the tide for a while and not hang about so that we’ll have enough water still to get over the sand bar below the lock. Glad we checked as a week ago leaving time had been suggested as 9am. Cromwell Lock was then called to book in to reach Torksey the day before, we could choose when we wanted to go as the tides at the moment don’t have much effect that high up.

This post was brought to you by using Tom’s third work around with OLW. Here’s hoping all the photos are present and correct.