We had two options if we wanted to stay put.

1 Walk along the towpath towards the tunnel, go up at the last bridge and join the road leading into Crick. This would involve a lot of the way by road, better done by bike than on foot.

2 Walk along the towpath to Watford Locks and carry on to where the B5385 crosses the canal. Here join the road and hope that one of the accommodation roads into Watford Gap was accessible by foot.

We chose Option 2, a nice gentle romantic walk along the canal.

So we retraced our steps from yesterday, we’d already had several boats come past us this morning whilst having breakfast and we knew of one that would have been there ready and waiting this morning (the boat that came past at 11pm last night). As we got to the locks there were two at the top, one in the first pound down and boats heading up the flight.

The lead boat coming up was a single hander who was bow hauling into the next to last chamber of the staircase. Obviously no help required from the Lockies, you don’t have to have them help you if you don’t want. Then behind was a hire boat with two Lockies and plenty of eager crew. Behind them a hire boat that was going to wait for the bottom of the staircase lock too be emptied before moving out. Behind them a chap who looked like he’d have a heart attack before he’d even made it to the bottom of the staircase. He was running round, trying to be as quick as he could, dropping paddles as the lady at the helm calmly said she would wait in the lock for the next lock to be prepared. He then fretted about closing the gate to go and set the next lock, which was still occupied. He may have been fretting as there was another boat behind waiting to come up, but there was no point in any of his rushing as he would just have to follow in line behind the other boats. If they were going slowly his haste wouldn’t get him any quicker to the top! We left them to it and carried on down the towpath. 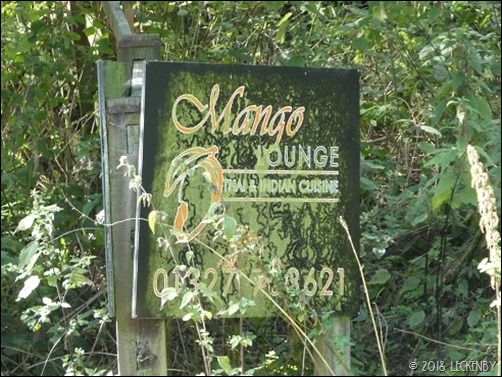 The noise from the M1 was constant now. Our nice romantic canal walk. I did wonder if Mick might treat us to an early lunch for two, but the Mango Lounge was still shut. Here we climbed up to the road. There was an accommodation road on this side of the M1 which would lead to the services, it did have a sign saying no unauthorised access. We chose to cross over the motorway, watching all the very fast travellers below in their four lanes speeding their way first northwards then south. 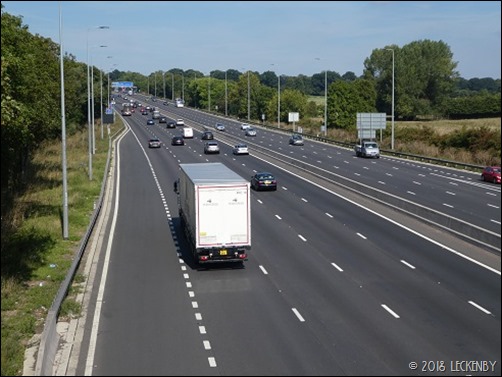 The other road leading into the services invited hotel guests in along with advertising for staff for a new drive through Costa. Coming in through the back door is odd. Our world so different to everybody else’s here. We have walked, they have zoomed. We want a newspaper and maybe use of the toilets, they need the toilets, a coffee and a quick break from the monotonous 70mph of the motorway. It felt like we were in one of those films where everything zooms and zips around you whilst you carry on in slow motion. 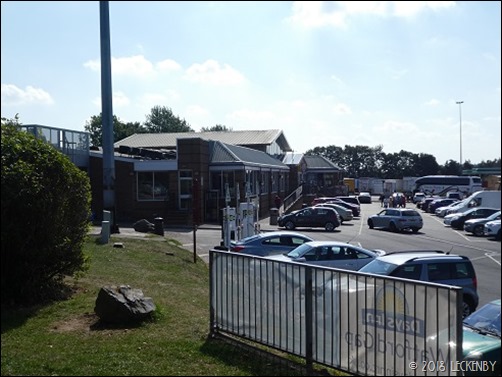 Mick had considered treating us to a breakfast whilst we were here, but that would have worked out to over £20 (to include toast and a drink) for the two of us! The standard certainly wouldn’t have been up to being compared to a Mick breakfast. So once we’d both used the toilets, had a little browse and bought our paper we left them all to it and returned to our slow paced life. 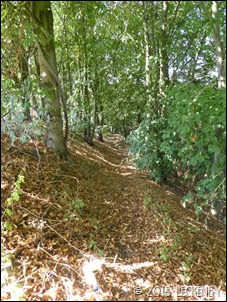 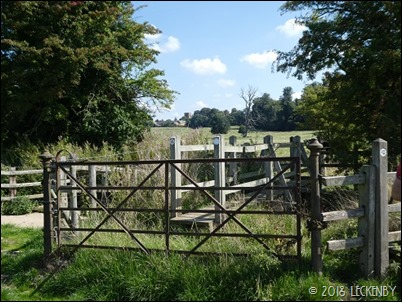 We decided on a slightly more scenic route back. Across the road was a footpath leading down through woods to a large field which sits below Watford village. We crossed this with no obvious sign of the path and joined the Jurassic Way which led to an underpass. We weren’t going to have to make a dash for it to cross the motorway! Across another field and we could see landmarks from the canal. The pumping station at the bottom of the locks, the white cottages at the top, but what we couldn’t make out was how to get out of the field. In the end we followed the fence until a style showed itself. Boats were now heading down the locks and we paused to open and close a gate for the lead boat before carrying on back to Oleanna. 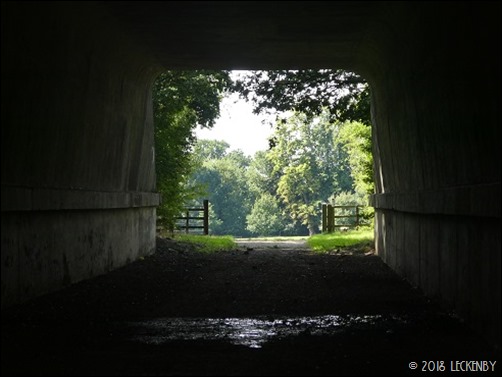 The rushing boat was just pushing off after a break a short distance after the locks. The chap shouting as before. They seemed to have lost any forward drive and she didn’t understand what he was saying as he jumped back off, being reminded to take a rope with him. We left them to it as voices were raised. They passed us several hours later, problem solved.

The morning dew had now dried off, time to get some top coat over the undercoat and see how much the red has faded over the last 18 months. 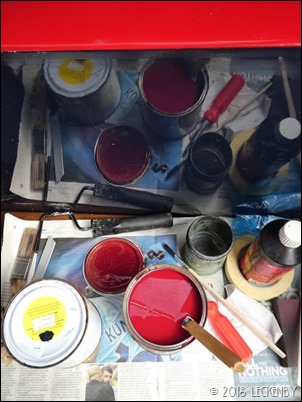 Undercoat gently sanded, then I thoroughly mixed the contents of the blue and red pots of touch up paint. As soon as the pigment was mixing with the oils in the red tin I could see a big difference. Either Oleanna’s red had faded (to a brighter red than the original) or the RAL numbers somewhere had gone a touch adrift. Our tins of touch up paint had been ordered from Wharf House last year, I remember checking the numbers with those I’d requested for Oleanna and those in the big book all about her. They all matched. 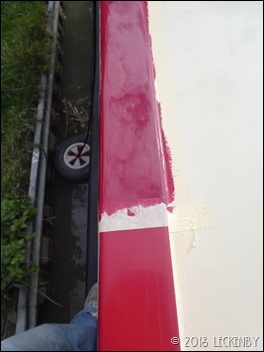 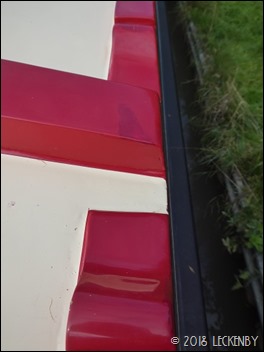 I applied the paint working it out to an even thickness and then laying it off in one direction, vertical surfaces from bottom to top, horizontal surfaces in a constant direction ending my brush strokes on the previous wet paint. A few dabs where some paint had worked it’s way off an some of the mouldings, here the colour difference was obvious. Red, whether paint, upholstery or anything fades quicker than other colours. This is science and cannot be got around. It is because it reflects red light and absorbs blue, green and UV light. The shorter wavelengths of these colours have more energy and cause bleaching. However blue, white and silver reflect blue and UV, making them fade slower. So our paint has just faded and will continue to do so. 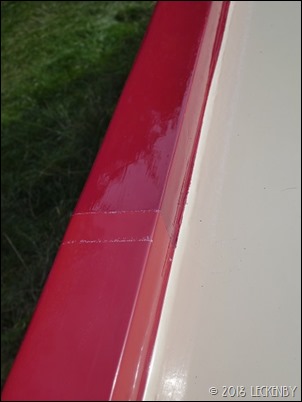 I had thought that I’d maybe repaint the grab rail if the colour was very different, maybe just along the section that needed it. But with work commitments this will have to wait for a gap with good weather before the temperatures drop, or be put off for spring next year. At least there is now a top coat to protect what is underneath.