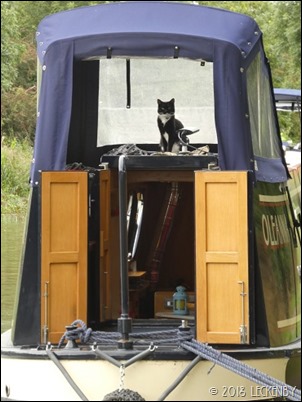 On Monday morning Mick offered to check the voltage on NB Pandas batteries. Lizzie had reported flickering lights and her heating the previous morning had needed the engine running before it would kick start, all suggesting not enough juice in her batteries in the mornings. The voltage wasn’t too bad once checked and Mick gave Lizzie a bit of advice on how to check the voltage in future. 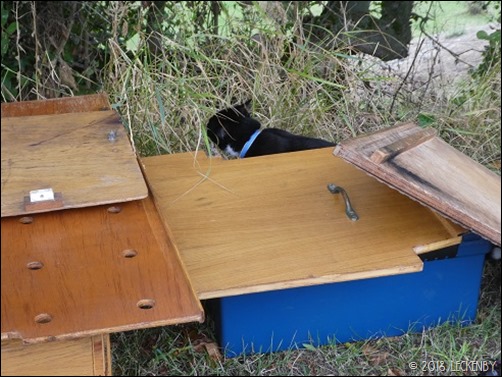 The meanies wouldn’t let me give my opinion, let alone have a look in Pandas box. Panda has a different box to Oleanna, that is because she is a Trad, so her box has another box around it inside Panda. Because they wouldn’t let me look inside I made sure I checked out the box on the towpath. It wasn’t a good box, it was all in bits! After lunch Gary and Lizzie made their way back towards Crick leaving us with new neighbours very quickly filling the space they had left behind.

We are considering having stern stickers printed, that say ‘Please share our mooring ring’. The number of git gaps there have been since we’ve been here. It’s a popular mooring and despite there being plenty of space people were having to use spikes at either end because others hadn’t nudged up!

During the rest of the day I continued with my model, finishing it and taking a full set of photos. This is so that I can remember it in it’s full glory. The first quote to build the set had come in and some pruning is needed, sadly not with scissors, but hopefully the chain saw can stay locked away!

Tuesday and we needed water, so therefore started to head back towards Yelvertoft. Tilly took some convincing that she should stay in otherwise we’d be changing the outside with her in it and the new outside would be quite far away! As Mick stood at the helm  I stayed below and worked my way through the props for panto, doing sketches to illustrate the big auditorium scene. We paused for lunch and then carried on pootling our way to the water point at Yelvertoft. 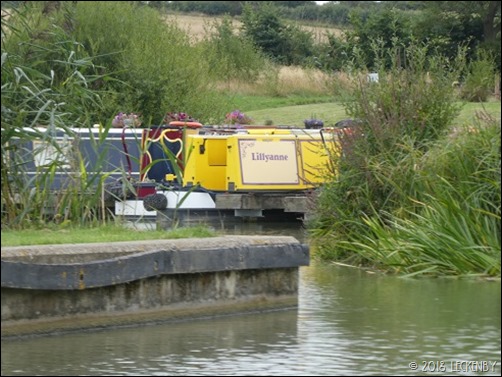 For once nobody was there and there was plenty of space for us to pull in, leaving enough room for a second boat to moor without having to be on the very wavy armco. Just as the tank was full one of the permanent moorers returned, peering out of their side hatch as though we were in their space. For a short boat they seemed to want a lot of room to moor and as they came in it looked like they would catch our stern. Mick went out the back to check on things as I went to sort the hose. All was well and the dirty looks were taken back.

Now when I say all was well, it actually wasn’t! A certain young second mate saw an opportunity and went for it. Well they kept stopping the outside and tying it up. I liked the look of this one so as Tom had left the back hatch open I went to have a look. We were on a water point and our second mate was AWOL! Another boat had been filling with water, they hadn’t seen her. The people who’s mooring we weren’t on hadn’t seen her either, but a chap with a dog on a lead had. He very helpfully walked to the slight gap in the sideways trees and pointed to where Tilly had vanished.

The lady on the boat behind started calling ‘Here Puss Puss’ and the boat at the front started to look around. To me, after calling Tilly a couple of times there seemed little point in everyone making a fuss, she was less likely to come, especially with the helpful man and his dog around! I was about to make a work phone call and try to be really really interesting on the towpath (it usually works to get a cats attention) when the boat ahead shouted ‘She’s there!’ followed by ‘Grab her!’  This luckily wasn’t possible as she was behind a locked gate. I know my cat and had the chap attempted to grab her she would have jumped to just out of reach a couple of times before heading off into some nettles or brambles, I speak from experience!

Fortunately she found something with an interesting smell on our side of the sideways trees and was transfixed by it. I leaned over and just picked her up. Everyone was relieved, especially us as we could now move on to Cracks Hill. For a short time we had become Continuous Cruisers who had to wait for their cat before they could move on! Some people have to wait days! We do our best to avoid such instances and for this occasion we blame the stare we got from the side hatch of the boat coming in to moor. If it hadn’t been for that lady our stern hatch would have been closed. What is it with Yelvertoft Water Point and our second mates? Houdini managed to go walk about there too! 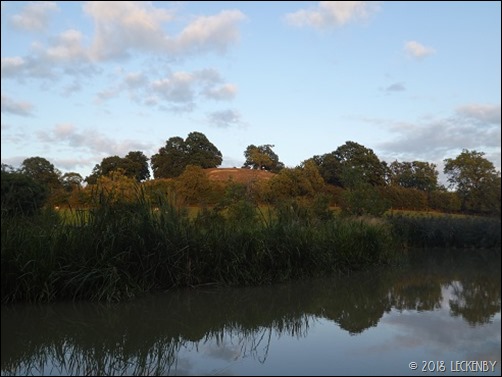 Our place at Cracks Hill was taken, normally we’d have headed closer to the village but I needed to make a phone call and signal exists here. So we pulled as far back away from the winding hole as possible on the armco. Mick walked into the village for some supplies and to pick up a parcel from the Post Office whilst I tried and failed to make my call. 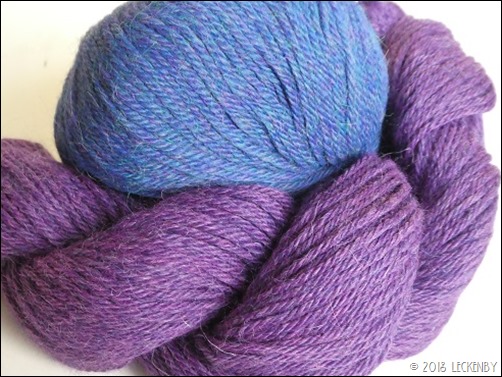 The yarn for my first Etsy custom order had arrived which means I will be spending my evenings knitting again. 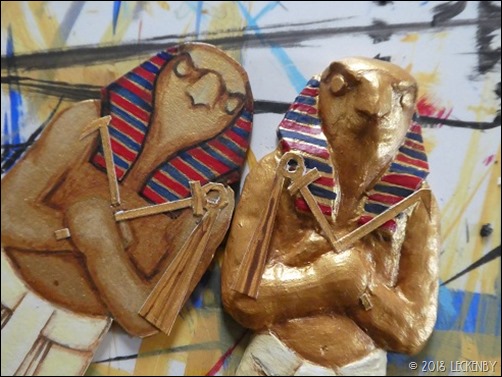 This morning an arranged phone call to my Production Manager at 9:30 finally put an end to us playing telephone ping pong. The bench opposite Cracks Hill became my office as boats passed by, Tilly shouted at trees in the field below, Mick brought me a tea and the M1 droned away in the background. After our conversation I spent the remainder of the day flattening my design and blacking bits of set out with the hope that these alterations will bring us back into budget. Mick has pottered away the day, whilst Tilly has studied the life and habits of the local Water Voles.