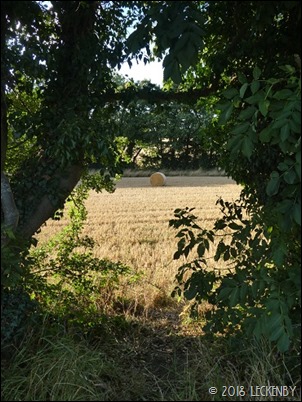 A couple of days ago we had placed an order with Shoes for Crews for some new shoes.  They make work wear shoes with very good grippy soles which are great for wet surfaces. The other good thing about them is that Mick’s feet don’t manage to burrow their way out of them within six months which is a rarity as he wears them every day all day. Yesterday we’d had notification that they had arrived at Crick Post Office, the parcel was likely to be quite large so we wanted to pick it up sooner rather than later. So as soon as breakfast was packed away we pootled the half mile to bridge 28 to wind so that we could return to Crick. 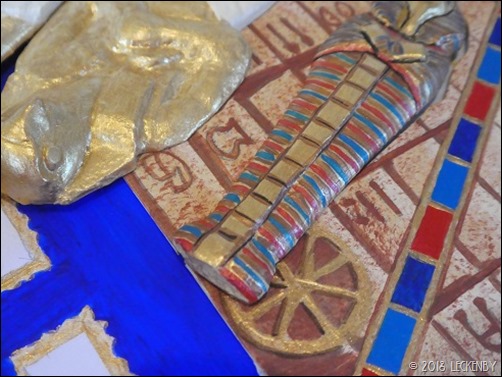 I was on mooring duties only today, trying to get a second good days model painting under my belt. If the set I was designing was a house or something a little bit abstract say then I’d have long finished painting the model, but this just seems to be taking forever! It doesn’t help when I change my mind about what colour to paint things. Slowly and steadily I’ll get it done, I’m quite pleased with the pieces I’ve finished, there just needs to be more of them! 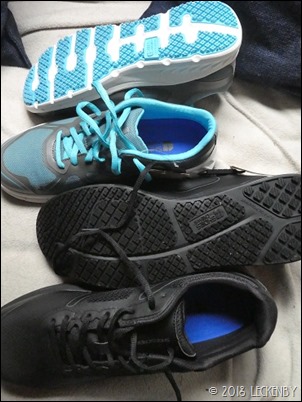 Mick pootled us back to Crick, waving as we passed Lillian at Yelvertoft. The space nearest to the bridge was free so we tied up and Mick headed to the Post Office for our shoes and some locally grown beans for our evening meal. A little early for lunch, but as we were stopped it made sense before we winded and headed back the way we’d come. We’ll be back next week as there will be a yarn order arriving for a custom order from my Etsy shop, shame the lady hadn’t got in touch a day earlier as more than likely it would have arrived by today.

A boat was just turning out of the marina main entrance as we wanted to reverse up to the nearest one to us to wind, so we waited for it to slowly come past. This gave me chance to see if I could spot NB Blackbird sitting in the ABNB pool outside the office. She was just visible behind a couple of other boats, her bow button fender and pram cover giving her location away. When the way was clear we reversed and winded and were on our way again.

The afternoon passed quickly along the summit pound. Plenty of moored boats to slow for and plenty going the opposite way. Passing moving boats makes Oleanna list quite badly in shallow water. Mick slows us down but others on their lighter boats keep moving at speed, I don’t think they realise just what effect this has on deeper droughted boats. One chap had a breaking wash as he passed us, causing a five drawer moment and I picked up my water pot as a precautionary measure. 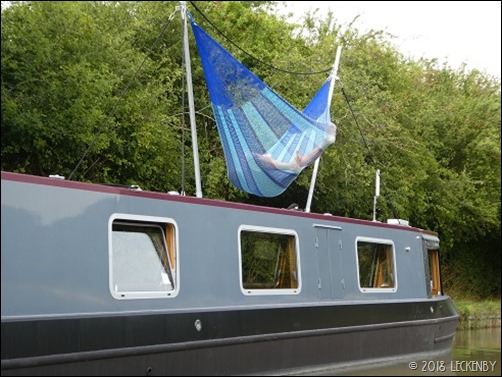 As we rounded one bend Mick opened up the rear hatch and told me to take a look out of the side. Fixed to a roof of a boat were two scaff poles which both had guide ropes, suspended between them was a very large hammock with a chap laying in it. It looked rather comfy, but a bit of a contraption to set up, bet they don’t move everyday. 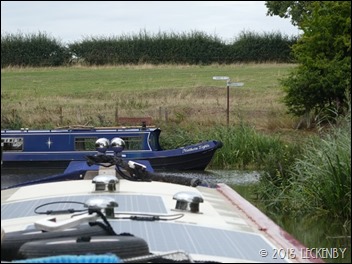 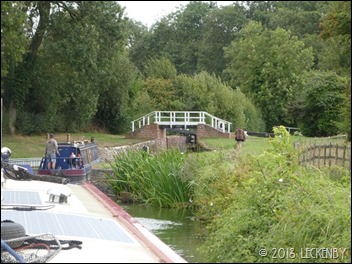 Keeping an eye on our trip computer I counted down the bridges to Welford Junction. A boat coming the other way just beat us to the junction and turned up towards Welford where a mile further up the lock sat empty waiting for them. I hopped off and helped them through, the lady staying to lend a hand with the gates for us, chance for a chat. They are killing time until they can move onto their mooring in North Kilworth Marina, which is still going to open soon (this has been the case for years!). Apparently they booked their space over a year ago and were told that the marina would be open late last year, the latest date is September this year. However there are still not many pontoons with electric to them. I got the feeling that by Sunday there would be one more pontoon powered up just for them. 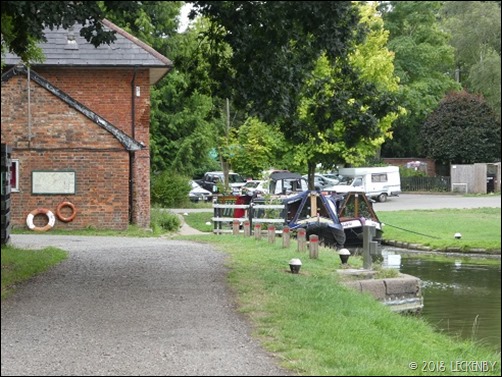 They elected to wind and moor near the lock whereas we carried on. Our memory was hazy as to whether there was space to wind at the end, we could remember facing the way we’d come, but not where we’d winded last time. Nicholsons shows one winding hole before the basin, but Waterways Routes shows the one at the end by the water point and pub as well. The two spaces right by the pub were taken, but we got the nearest mooring by the winding hole which will do us for a delivery in the morning (we have a birthday to cater for over the weekend).