The last few days the weather has returned to normal English Summer. Overcast and at times rainy, thank goodness, I have to say I prefer the lower temperatures. 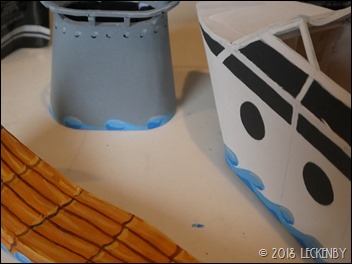 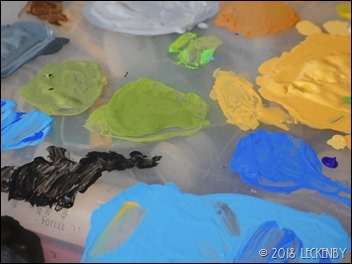 I’ve been working most days, gradually working my way through a box of set pieces. The box contents still seem very pale, there’s a lot more painting still to do.

On Saturday evening we were glad that we’d moved out of the village. Lots of gazebos had been set up at the marina and we guessed that it might be the moorers summer barbecue. It was, even with the constant downpour it sounded like everyone was having a jolly good time. Our mooring was half a mile away, but we could still join in and sing along with the music. 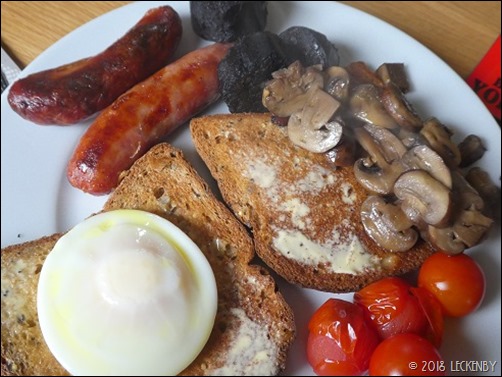 Sunday evening we met up with Lizzie and Gary, heading to The Wheatsheaf for a meal. Their Sunday roasts are meant to be good, but sadly as it was the end of a busy day there was only one left. Lizzie and I opted for the nearest thing on the menu, Belly Pork whilst the boys had beef fajitas and gammon and chips. All very nice finished off with puddings all round. There was lots to catch up on as it’s only a few weeks since Lizzie and Gary returned from a two week cruise up the Thames on NB Panda. They had moved her over to Cropredy in advance of their trip and had planned on leaving her there on their way back for a few weeks, but because of low water levels they legged it all the way back to Crick instead and got Panda back on her mooring. Quite a few long hot days. 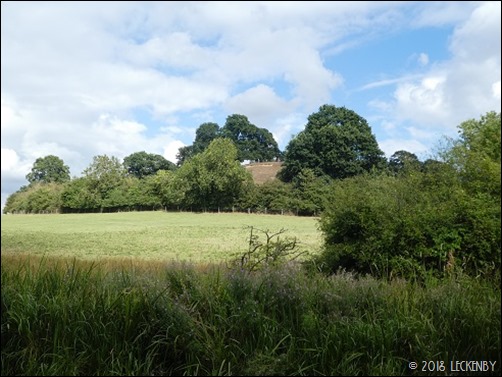 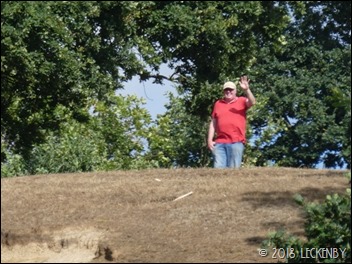 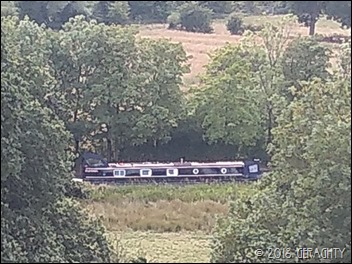 It just so happens that our friends Bridget and Storm were arriving on NB Blackbird this week. One of those coincidences that was meant to happen. On Monday afternoon the curly ears of a familiar black springer spaniel appeared in our side hatch Bridget followed soon afterwards. They had arrived in the village during the day and were moored towards the tunnel where mobile signal is very poor if any, so she’d decided to walk Max over Cracks Hill to find us. Plans for a meal out at The Moorings were made for Tuesday. 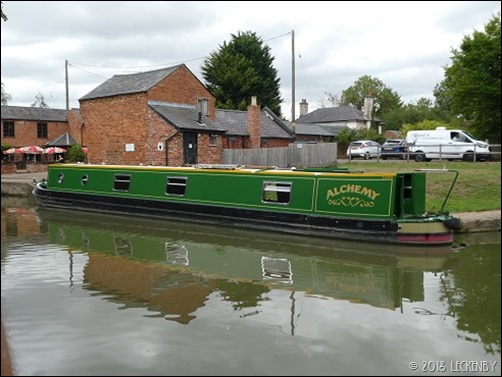 So on Tuesday morning we winded and returned towards the village mooring quite near the main entrance to Crick marina, this gives Tilly plenty of space to explore not too close to the busy road bridge. There were parcels to pick up from the post office and a bit of shopping needed. At the water point a familiar green boat was moored, NB Alchemy. Neil Stuttle was busy working away on the bow, but we couldn’t see anyone else to say hello to. 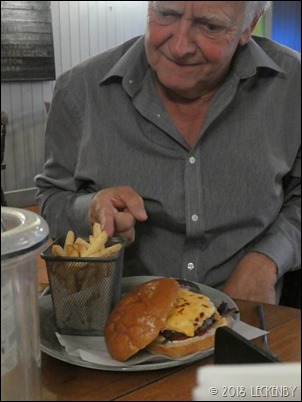 In the evening we walked down to meet up with Bridget and Storm. Crick feels like home to us all, a familiar friendly place we have all got to know through the years. Mick and I started off our journey four years ago here and when we pulled out of the marina on NB Lillyanne (Lillian), NB Blackbird was waiting for us, this is when The Wasp was formed. So it was only right that we were here for their last night on board Blackbird. We had a nice meal at the Moorings. Have to say that Mick and I remembered the menu being more extensive than it was and they do not cater for those with food allergies, a little disappointing. Having said that what we had was very nice and we had a lovely evening, finished off with a couple more glasses of wine on Oleanna. 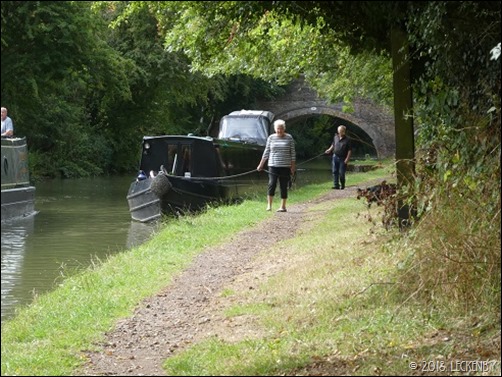 This morning we walked down the towpath to say our final farewell to NB Blackbird. Bridget and Storm were pulling her along towards the water point but had just been beaten to it by boats coming from the tunnel. Time for one last photo before they emptied their belongings into their car and handed the keys over to ABNB for her to go on brokerage. Big hugs all round, a sad day. Their next adventure is already on the horizon in the form of a maroon motorcaravan. So we’ll be expecting those black curly ears to pop through the side hatch again, they will have just arrived by road not by water next time. 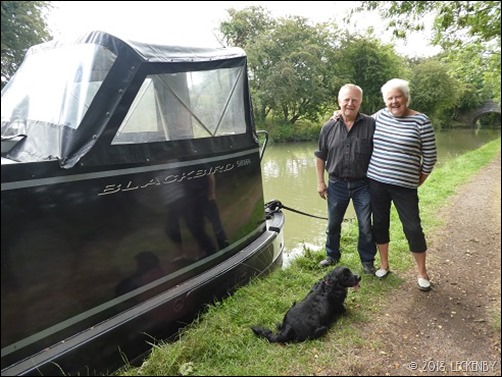 A parcel hadn’t arrived at the post office, so we shall have to return in the next couple of days. We reversed back past the marina entrance and then pulled in to fill the diesel tank. Since we were last here there is a new Harbour Master, we’d met him at Cropredy a couple of years ago. A very jolly chap who has brightened the marina back up after a year of it being in the doldrums. It was nice to see Him and Her in the office even if the diesel was a touch on the dear side. 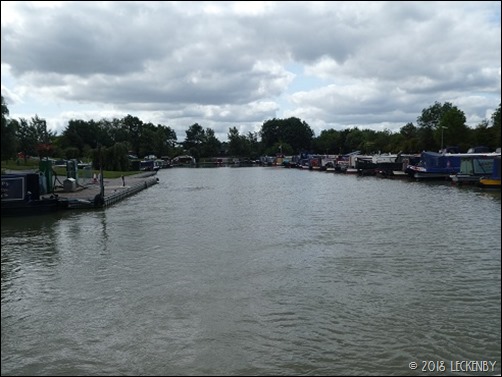 In the past we would have waited for a lull in the wind across the marina (we’ve met all sorts of people when Lillian got blown the full length of the marina!) but today with bow thrusters reversing and turning out was easy. We then turned northwards and headed towards Yelvertoft. 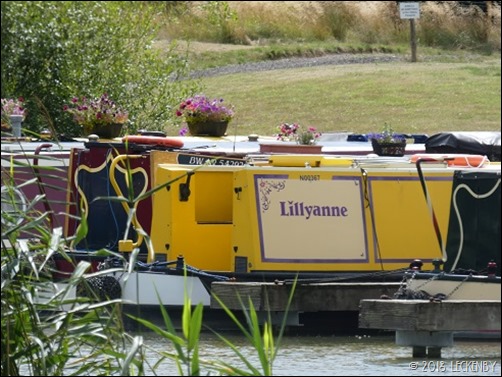 Passing Yelvertoft Marina we kept our eyes peeled. We needn’t have really because very soon we could see Lillian glowing on her mooring. Minus her pram cover she looked in good order from what we could see. Wouldn’t it be funny if once NB Blackbird is sold she ends up mooring at Yelvertoft next to Lillian, the owners wouldn’t know their past. 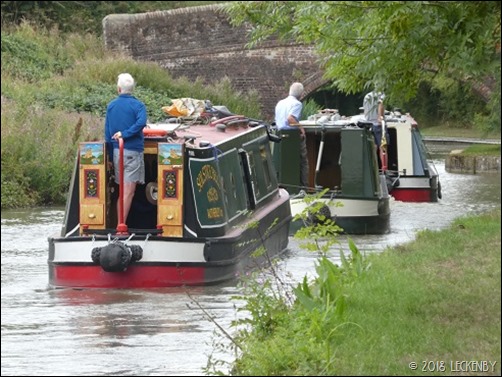 There was a boat loitering in a bridge hole, they kept looking over their shoulders and then at us. What had they lost? As we got closer they moved towards us and warned us that we’d be coming across three boats. The front boat was towing the second which had broken down. This was then attached to a third boat which they were using as a break when needed. Luckily we’d got through the bridge before they came round a bend and we managed to hold back for them to pass.

A short distance on was our chosen mooring for the day. Houdini’s Field. As soon as the trip computer was off the doors were opened and Tilly and I went to have a look at the field. The crop had recently been harvested leaving the golden stubble. Tilly had a good shout at it all. 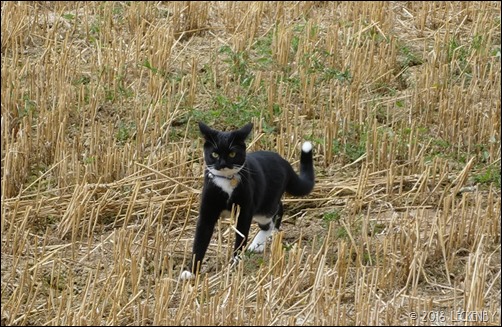 It is great here! Trees, sideways trees, friendly cover, someone though had stolen the tall grass that was here last time. That was fun I could pounce around to my hearts content, jumping high enough just to clear the grass before landing on top of an unsuspecting friend. The grass was short and spiky, but it did mean I could see any friends much easier. 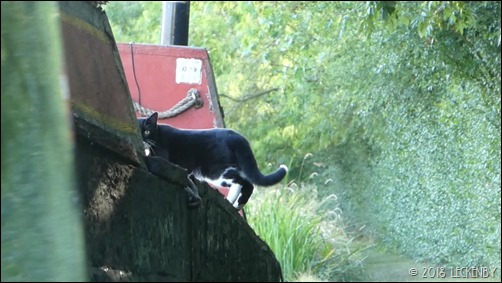 There was a really good boat too. It had a low roof and was all made of wood, very handy for sharpening my claws. I think it should be Tilly’s field, but she won’t change it’s name!