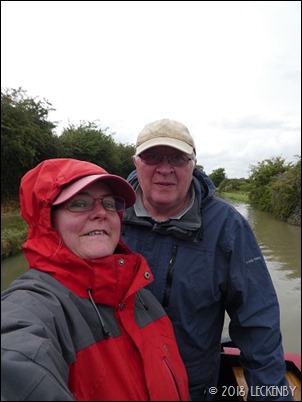 The temperature certainly has dropped and we woke to rain, constant rain. This is good as even more of the system is going onto night closures in the next week and now the eastern end of the Leeds Liverpool Canal is due to close, leaving the twenty mile long pound at Skipton lock bound for the foreseeable future. So any rain is good. We literally dusted off our waterproofs tops and bottoms and pushed off to cruise the three miles to Braunston. 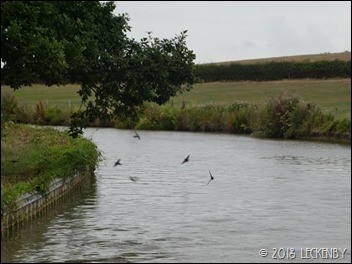 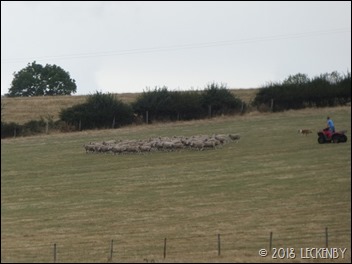 A farmer rounded up his sheep as Swallows had a great feast under trees on the canal bank.  They swooped and dived and swerved to avoid Oleanna as we passed. 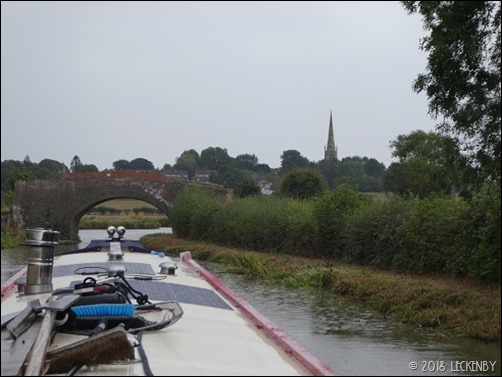 The first glimpse of Braunston spire (BANGERS!), we were nearly there. Our hope had been that arriving in the morning we’d find a mooring easily. Braunston is a popular place, the start of the Grand Union heading south to London and the Thames, the south Oxford heading to Oxford and the Thames, routes to the River Soar and Leicester, towards Hatton Locks to Warwick Leamington Spa and Birmingham. Because of this there are a lot of marinas in the area, therefore lots of boats. 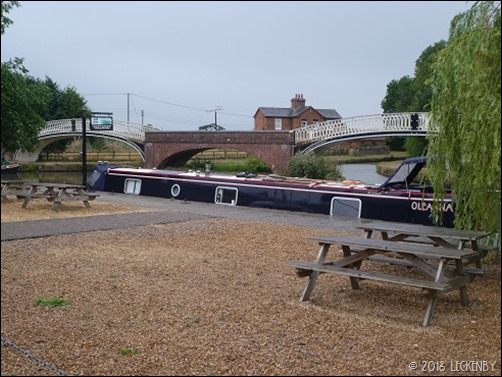 We were lucky as we pulled round the bends to find the customer mooring at Midland Chandlers free right opposite Braunston Turn. Here the two arched bridges span the junction towards the South Oxford and very pretty they are too. Midland Chandlers didn’t have a Vetus fuse for our bow thruster. It hasn’t blown again, it’s worked fine since Finesse put a new fuse in, we just want to have a spare at hand. So we disposed of our rubbish mountain and then found a mooring. 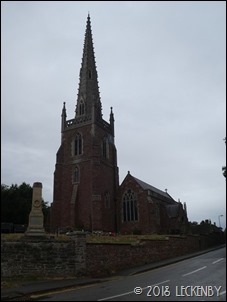 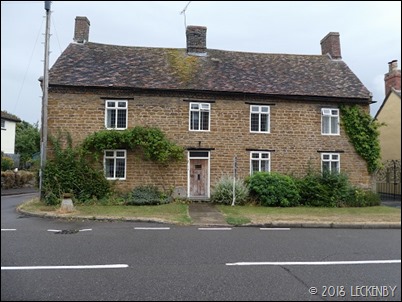 We walked up into the village past the church the day was starting to dry out now and I slightly regretted leaving on my waterproof trousers, gradually getting sweaty knees. There are a lot of properties for sale in the village, The Shambles being the prettiest and most expensive at £750,000. 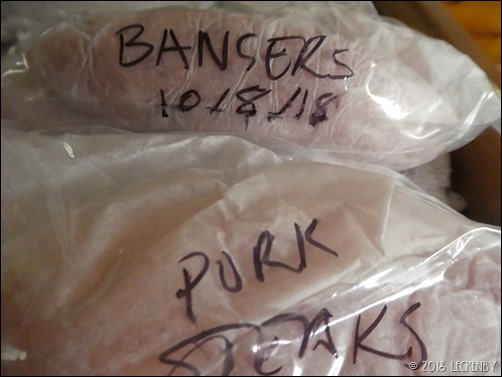 First port of call the butchers for some bangers. Several other things also went into our shopping bag including a caramelised onion pork pie, some burgers, a couple of pork steaks and some veg. The freezer would be slightly fuller and all we should really need for a couple of weeks is bread milk and fresh fruit and veg.

Then we headed to the bottom lock to Wharf House Chandlers. They didn’t have the fuse we were after either but did have a filter and some new fender hooks as we’ve broken a couple recently. Time for lunch and then make our minds up whether to cruise on today or not. The weather reports suggested that there would be more rain this afternoon, but not until 4pm, so enough time to get up Braunston Locks. The cratch was rolled up ready, waterproofs close to hand should we need them and we pushed off. 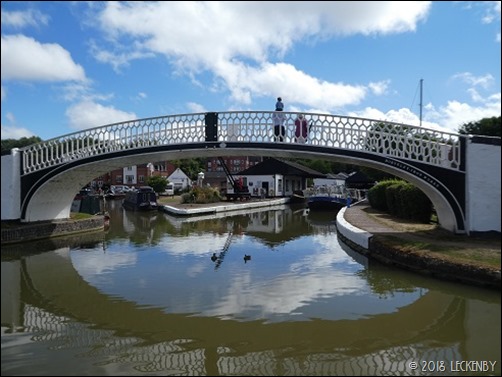 The bottom lock was full, so we decided to wait for another boat to either come down or for a boat to join us to go up, doing our bit to save water. A boat appeared behind us and kept coming towards the lock, I walked up and zoomed my camera to the next lock and could see bottoms sitting on the back of a couple of boats, we were following. So I set the lock for us and NB Ottawa who had four on board so plenty of crew to get us up the flight. It was sunny and warm, no need for jumpers now. Well until a very big black cloud made it’s way towards us, it was only 3pm. 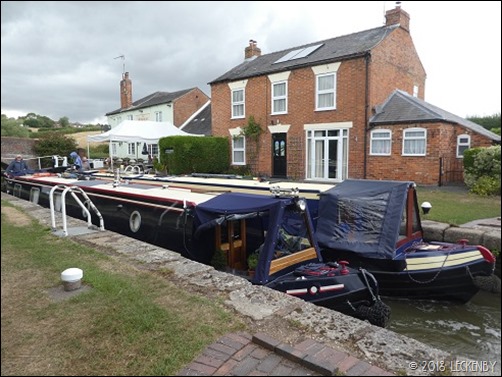 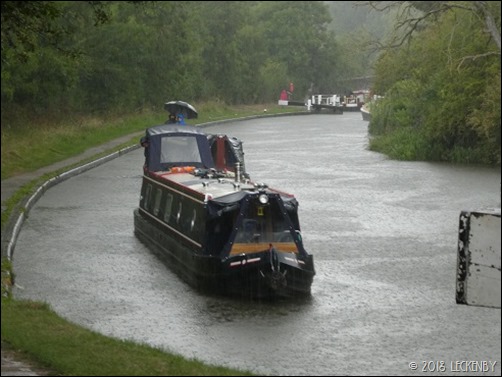 Drops of rain, we were following four boats up. The waterproofs were handed out and I’d head on up to the next lock to set it for us. I think it was about lock 3 that the heavens really opened up, rumbles of thunder, fork lightening on the hills. Mick even lifted up the pram cover for a bit of shelter. No matter what clothing you were wearing you were going to get soaked. Up ahead there was a hire boat sitting in a lock, water pouring over the bottom gates. I popped up to see if they were okay, they were waiting for another boat to join them from the lock above. Wise, except that boat was already sharing so a full locks worth of water headed over the bywash and the gates as they waited to be joined, the other boat then had to wait their turn. By the time we reached the fifth lock everyone was soaked, but in good spirits and the sun came back out and made everything steam. 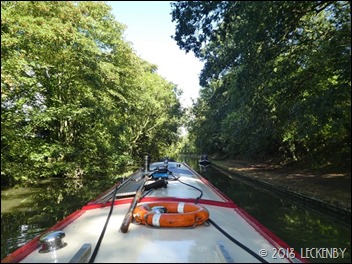 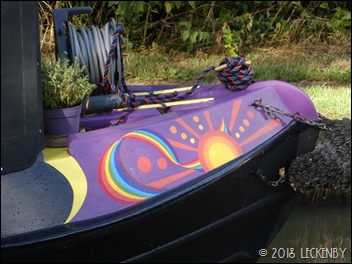 We kept our coats on and headed into the tunnel. We thought there were two boats heading our way, but only passed one, the other one was either a kid with a torch or it vaporised before we met it. Luckily we passed north of the big kink so no new scrapes on the gunnels. As we emerged from the dark the sun was streaming down through the tree cover. Works are on going near Norton Junction with a long length of armco going in, so no mooring there yet. We turned left and made our way to Welton Hythe, passing NB Happy Daze (another boat who won’t recognise us now) with a very colourful bow. Our usual mooring opposite the marina was free so we pulled in a tied up for the day. 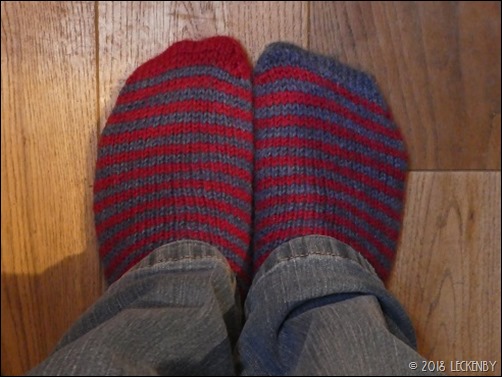 Waterproofs were nearly dry but shoes most certainly weren’t, meaning very soggy socks. Once a warming shower had been had I popped some nice cosy socks on. The lamb steaks I’d planned to barbecue went in the oven with some roasted new potatoes, helping to warm up the boat and put us off lighting the stove.