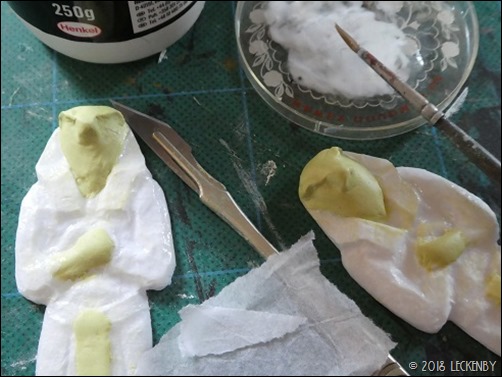 Tuesday we stayed put hiding from the sun under our tree canopy. My model pieces came out from the cupboard and I started to work on the smaller details of some of the elements and traced out a section of the set to see what colours would be good. Tilly explored when she had the energy to move and Mick sat out on the towpath trying to sort out one of his pensions, they’d lost a form then found it but then lost a birth certificate! Luckily it was only a copy, another copy printed off and popped in the post, fingers crossed they don’t loose it this time. 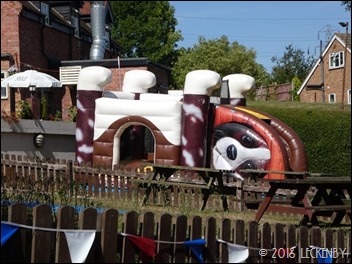 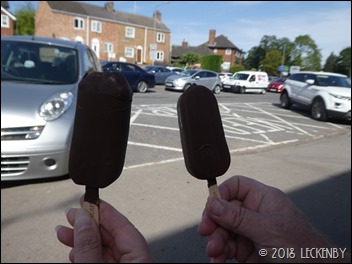 In the afternoon we had a walk down into Newbold to the shops. The Barley Mow had an interesting bouncy castle in the garden, a dog playing dead. A visit to the Co-op for an onion, milk and some chilled medication, nothing special but still worth having on what turned out to be the last very hot day. In the evening we finished off emptying the freezer with a sausage slop for tea. Only a couple of crusts of gluten free bread and some coffee remained, so it was turned off, lid removed so it could warm up and defrost over night. 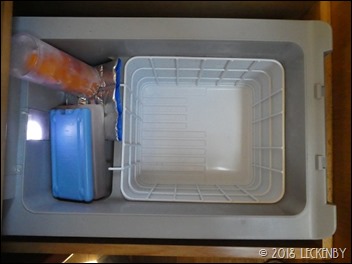 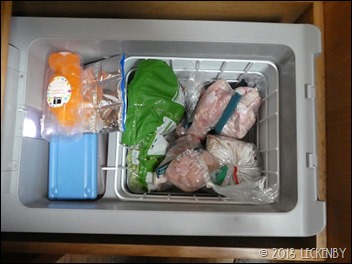 Wednesday and the freezer was cleaned out thoroughly, how does cat hair get in there Tilly? After breakfast we pootled onwards to Brownsover to find a mooring to be able to go shopping. Four heavy bags came back from Tescos with us, I wondered if we’d over done it on things for the freezer (not everything was destined for the small box under the dinette, some wine might have sneaked in there too!). As Mick moved us over to the water point I repackaged the things that were to be frozen. I chicken jointed, mince, turkey steaks and salmon repacked into meal portions, bread, the freezer gradually filled up leaving enough room for some purchases from Braunston Butchers. 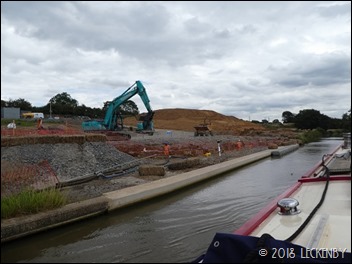 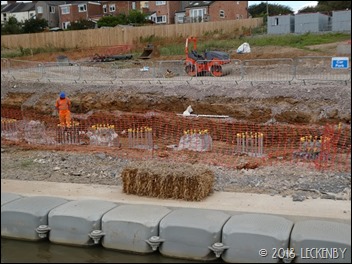 With the chores of water and yellow water done we pootled out of town. We paused at the nearest mooring to the station for lunch, this may be handy for my next meeting at Chipping Norton and then carried on a little bit further. The works on the new housing estate seem to involve a lot of mounds of sand and the works seem to stretch from Brownsover all the way to Hillmorton. A new bridge is being built over the canal and the foundations on one side look like they are in.  We passed quite a few boats moored up and then found a stretch of Arnco for ourselves, managing to pull in out of the almost constant flow of traffic.

Yesterday we’d been passed by Riverknits whom I follow on Instagram, I’d been busy rummaging for something as they passed, so Becci had sent a message to say if we passed them to come and say hello. I could see what I thought was her boat up ahead so took Tilly for a walk to see if it was them. I like going for walks with her usually, trotting along in front having chance to sniff things as I go by. There was a big bridge which needed a slight detour to check out but then I rejoined her. She didn’t go that far before she stopped at a boat and started to talk to a lady, this was boring, so I popped through the hedge to find immaculate grass with those funny little holes that my arms fit down. My afternoon was sorted. 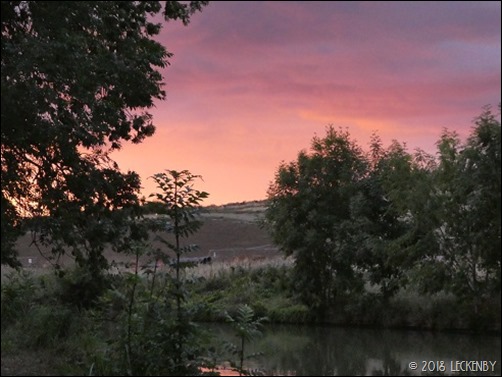 It was very obviously Becci’s boat, inside there were shelves and shelves filled with of skeins of different coloured yarn and a small notice in the window. Having followed each other for a few months, me being jealous of her having got the good spot at Tixall Wide twice this year had kicked off conversations. We had a long chat about boats and yarn. I was invited in to have a look at the new yarns she is working on at the moment. Black Faced Leicester DK in some wonderful colours, all very tempting, but luckily she wasn’t willing to let any go yet as they are for a collaboration with someone. I’ll be keeping an eye on her website for when she adds them as they were lovely. She and her partner hand dye the yarn on their boat in big pans, once it is rinsed and ready to dry it is hung out on large hooks from their grabrail. Some of her dyed yarns are named after places on the canal, Hillmorton and a popular one is Idle Women.  It was nice to meet, our paths may cross again, hopefully when my panto model is off the boat and I’ve been paid. 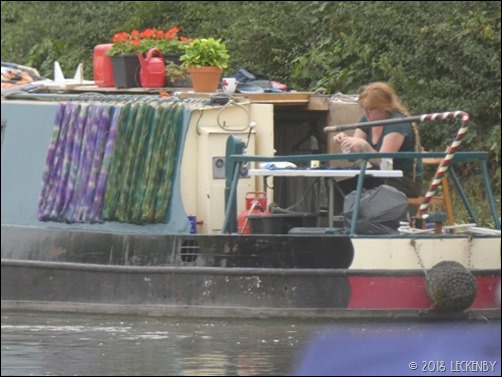 Today we waited for a gap again in the constant flow of boats passing us before we could push out. Passing Becci’s boat she was occupied adding colours to her next batch of yarn a deep indigo blue, more skeins hanging out drying. 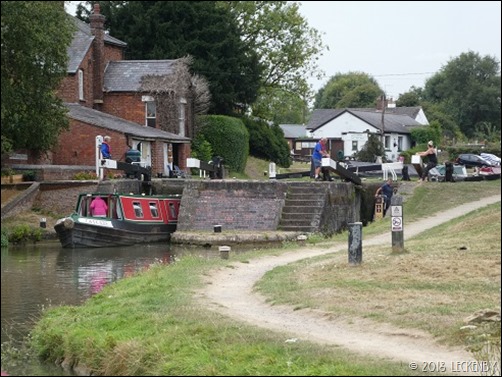 A mile ahead was Hillmorton locks, one of which is the busiest lock on the network. Today certainly wasn’t going to be an exception. We expected to join a queue, but only had to slow our pace a bit before one of the paired locks was in our favour. Two volunteers manned the bottom locks and we were soon up and on our way to the next one. A brief wait here where a single hander looked like he was about to jump infront of us but he just ended up being in the way for a boat coming down hill. Above at the last lock one boat impatiently refilled a lock instead of waiting for the next boat heading up, so nearly 100% efficient use of the locks. These locks are now being locked overnight to help the back pumps restore levels for the next day. It looked like the pumps were on full time anyway  with a flow entering the cut above the flight. 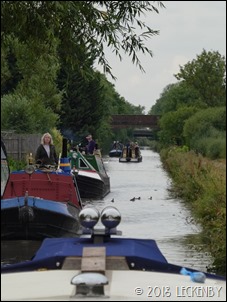 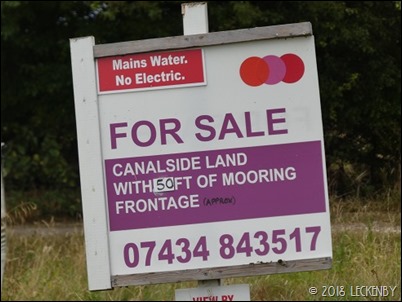 On we pootled. Boats coming towards us all the time. Along Barby Straight you could see at least three boats in both directions slowing to pass all the online moorings. The tree house we’d spotted a couple of years ago has gone and so has the old Ambulance that has been a landmark to us since we first came along this stretch. One of the rather nice moorings had a For Sale sign, wonder how much these go for with their gardens. 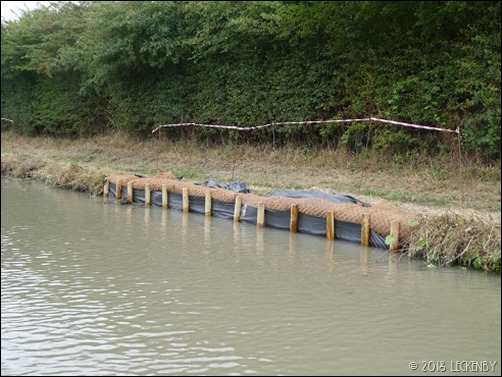 Under the M45 we came across C&RT staff working on the towpath. In parts the path has been eaten away by the canal making it very narrow. Here the chaps were adding wooden poles and filling behind them with the hessian sausages that help wild life and hopefully stop bank erosion.

We passed fellow Scarborian boaters on NB Bessie Surtees and then between Bridges 80 and 81 there was plenty of space for us to pull in for the day. Tilly was given 6 hours of shore leave and off she went. Lunch followed by an afternoon of work for me whilst numerous boats came past, others moored up leaving git gaps making us look like we were at fault. 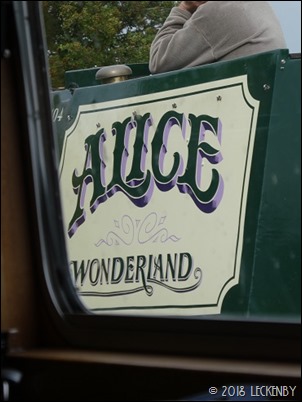 I’d been getting bored of red for a while, it is so last year! For a cat to be up to date with fashions I have to go to quite long lengths. Today I saw an opportunity and took it. The sideways trees here have had a mesh fence added to them which is quite hard to climb, but the sideways trees are dense and climbable. When I reached the same height as the top of the fence I noticed that it had prongs, this was going to be very handy. Being a cat and not having opposable thumbs means that unless I can make my collar ping with my mouth then it won’t come undone. My latest collar wasn’t a pingable one (believe me I’ve tried), but it stretches instead. I took a risk that she had fitted it correctly and I managed to loop it over the fence, I then carefully lowered myself to a lower branch. Brilliant it slipped off like a dream Fantastic! It’s quite liberating not having a collar on, this usually only happens when she puts that horrid stuff on my neck saying ‘It’s for your own good’ Pah!!

Feeling a touch hungry I headed home. Whilst calmly munching away at my biscuits there was a rush to close the doors. After much rumaging around in the cat proof cupboard she produced a new pristine clean collar in a rather fetching shade of dusty blue. That will do nicely I thought. But they will insist on adding a cat tag and dinging the bell lots. Apparently it didn’t sound like me, neither did the spare one in the pot. Tilly Too had to donate her bell to me as this was from an Easter Bunny like my previous one. I sat patiently whilst I had several collar fittings, the bell on the wrong side, a different bell, cat tag etc. Then when she was happy the back door was opened back up and I was given an hour. An hour! I had to parade along as many cat walks as possible to show off my new collar to other boaters I was going to take my time. 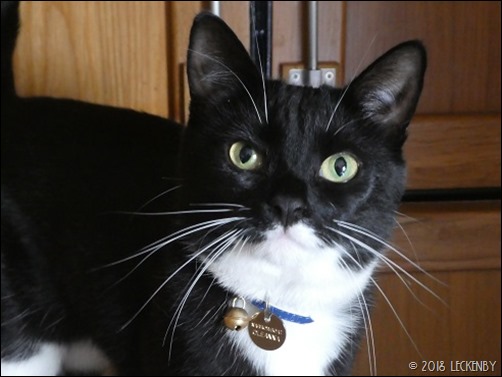 She did take her time, far too much of it! She was out through a thunder storm, ignored being called several times. We watch TV for an hour, then another hour, it was dark, her litter tray went out the back. Another walk along the towpath with the big torch in hand and still no sign. Where was she? At about 11pm she nonchalantly walked in the back and stuck her head in her food bowl. The bell on her collar must have been a substandard Bunny bell as it wasn’t making the right noise anymore, it was far too quiet. New tags have been ordered, now we need to find a better bell and a spare collar for the next time.