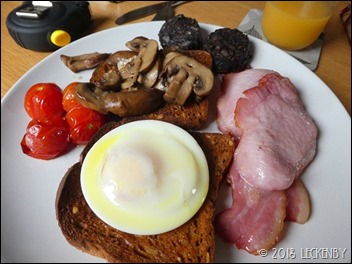 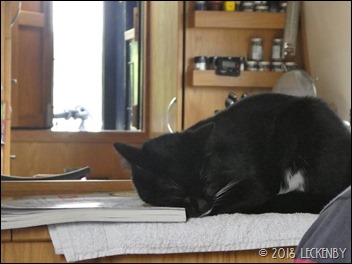 Sunday we woke to rain, not of the heavy variety, just the sort that is adamant to get you really soaked when you least expect it. Just as well I was having a work day, we’d bought suitable things for a breakfast, the Tour de France was arriving in Paris and that Tilly isn’t too bothered about rain. She is however bothered about wind and it was gusty. She had several excursions out onto the towpath to explore. When she returned towels were quickly deployed onto surfaces she wanted to sit on. I’m hoping my model survived a few near muddy paw prints as I’d taken over the dinette. 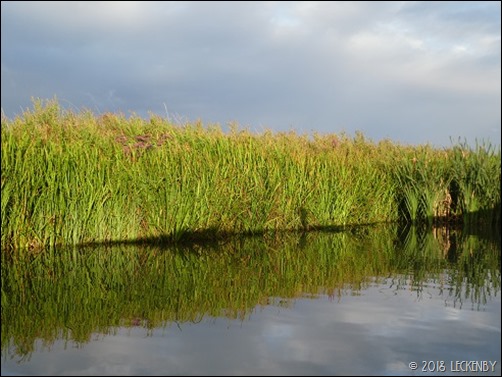 The rain kept coming until the evening, when the sun came out just before it was due to dip under the horizon. This produced the most vivid of greens in the reeds opposite and picked out the purple flowers.

Today we needed to be making a move again, I’ve a meeting this week and still had some work to do. So with Mick at the helm, waterproofs ready just in case and Tilly asleep on the bed we pushed off.

First thing they untied the outside and let it go, they do this quite often, it’s not unusual. It drifted off into the distance. Every now and then she would go outside and they’d tie up the outside to stop it from getting away. There were several of these outsides, but we didn’t stay long at any of them. The first one was hard to hold onto as another boat was passing through ‘Too quick!’ The hose was connected here and the wet box under the floor at the front filled. 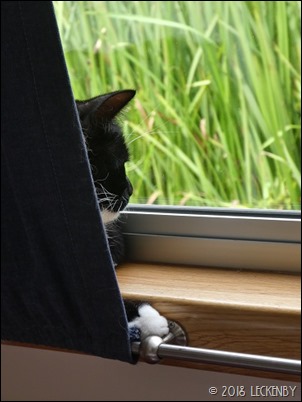 Then they let this outside go replacing it with another a while later. This one had more promise, trees, sideways trees, a bit of friendly cover, but I wasn’t allowed out. I’d have appreciated it more than them, they just sat inside and ignored it! What a waste. They let this one go too.

The next I wasn’t too sure about. It took a bit to tie it down, there was a man complaining about it, don’t blame him, it smelt! I stayed looking out of the bedroom window ready to persuade them to let this one go too! She came in to find a cheque book, apparently the last time it was used was when they bought me from the rescue centre two and a bit years ago. Luckily they gave up on this outside and pushed it away and kept on moving. 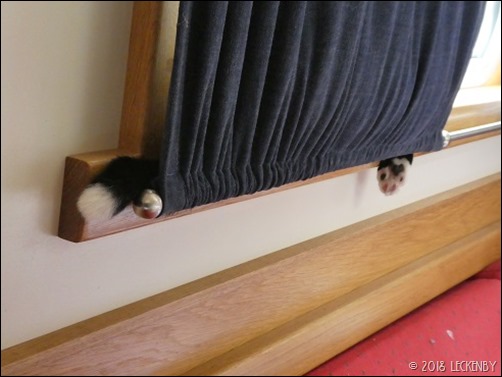 How long before the outside was fully changed? It was getting boring inside. She was inside most of the time, not keeping me company but doing interesting things. In between snoozes I kept an eye on what she was doing. Putting things in and out of boxes. Two boxes, just my size. One had lots of little bits in it the other had thin obstructions stopping me from gaining access. She kept putting more and more things in it from the other box. I watched just in case one of these became empty enough to make room for me, but that didn’t happen. In the end I decided to make space for myself. I scooped out a little thing. Hey this was similar to finding a friend, I could have loads of fun. She didn’t agree, she was angry. 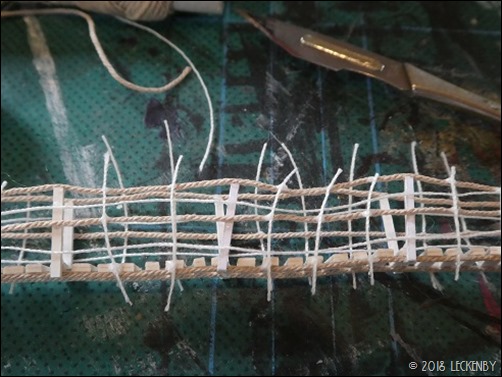 Tom got close to an outside and as she went to tie it up she said ‘If you touch anything, I mean anything, you will die!’ Blimey, maybe these little things were poisonous. I decided to watch her instead. Once the magic music had been played and she’d written down the numbers of this outside the doors were opened up. I was given two and a half hours and if I could come back with a new model chair that would be good.

2 thoughts on “Tying Up The Outside. 30th July”