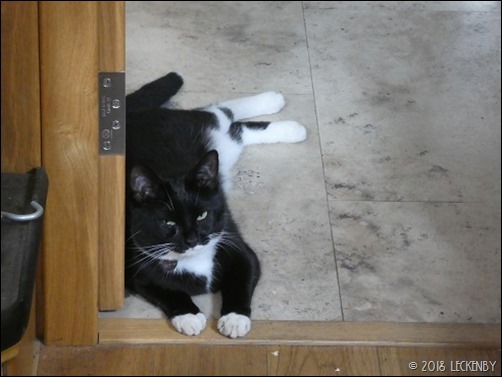 Tilly stayed close to home on Friday, not venturing too far. The battlefield excursion had obviously had some difficulties for her that she’d rather not relive. Another hot day, if these temperatures into the 30s are going to be the norm in future summer months we may have to look at replacing our bathroom flooring. On Lillian the floor was made of ceramic tiles, Oleanna has Karndean flooring, it looks nice but doesn’t stay as cool. Tilly still tends to flop in her hotter moments onto the bathroom floor (so it must be cooler than the wood), on occasions hugging the base of the compost toilet.
I read a post on facebook about someone who’d been wondering if their cat would be more comfortable in the heat without their fur, they had done some research on the internet. Cats fur acts as an insulator, so keeps them warm in the winter and helps to keep them cool in the summer. So if you shaved them you would be removing their natural protection, you also wouldn’t have much of your hands or face left! Apparently cats are okay up to temperatures of 40C. Our old cat Houdini once managed to get herself covered in some oil like substance and had a costly weeks B&B at the vets having baths to try to remove it. Her body reacted and she lost fur from her belly and legs, only her paws escaped, leaving her looking like a clipped poodle. It took months for her fur to regrow back, so we will not be subjecting Tilly to such embarrassment, but maybe a cool slab to lie on instead. 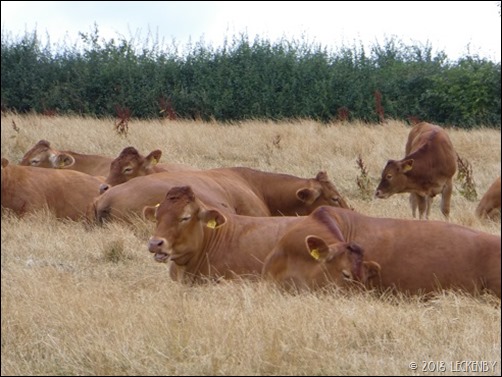 After a day back at work it was time for us to move on again, there was a Saturday newspaper to get after all. We decided to cruise up to Market Bosworth and walk up into town. The dishwasher was put on shortly followed by the washing machine, we’d be filling up today. Outside the temperature necessitated the wearing of jumpers, it wasn’t even 6am!
A cooling 3 mile pootle brought us towards the moorings on the outskirts of town. These were very busy, the penny dropped, The Rails and Ales Festival was on at the station, boats were breasting up. Luckily for us there was space on the marina visitor moorings, the sign says £5 a night and we only wanted a couple of hours. 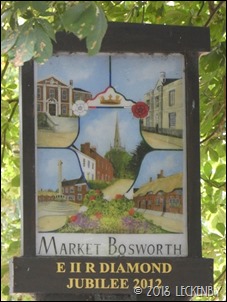 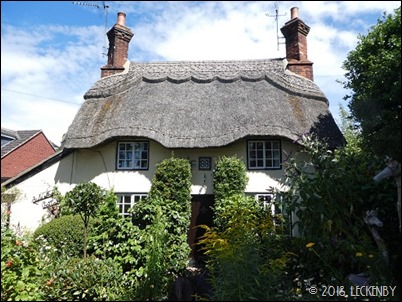 Getting on for a mile walk uphill to the town was worth it as the square opened up in front of us. 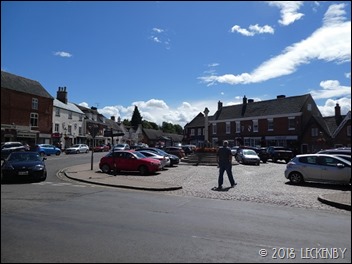 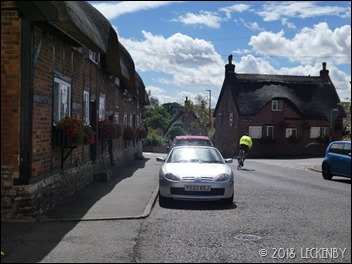 We visited the pharmacy for more antihistamine tablets, the newsagents for our newspaper, a few bits from the small Co-op and then visited the greengrocers/florists Rose and Radish. A few bits of veg plus a couple of tasty looking things from a bakers display. Next door to the butchers, Lampard’s, for some bacon and black pudding. All the meaty goods were hidden away so no impulse purchases were possible today, but we had enough of what we wanted. 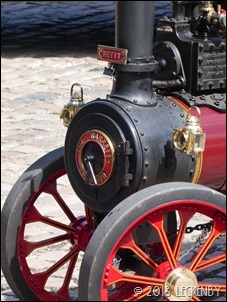 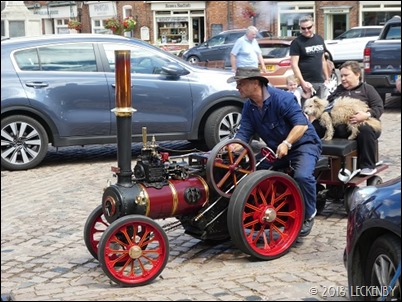 In the corner by the tea rooms we could see some steam rising. Not scone rage, but two mini steam powered traction engines. Each could carry a couple of passengers but were having difficulty reversing. Relieved of passengers each engine was pushed backwards to turn, a lady got back on along with her dog and was asked where to? ‘To the chip shop please’. 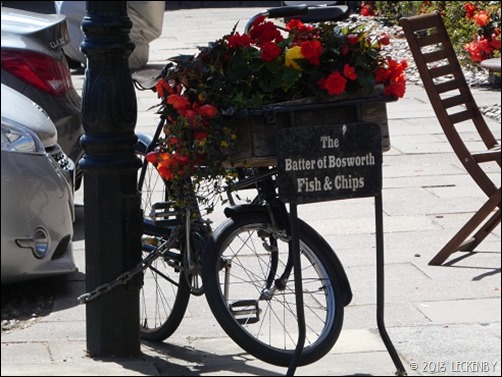 A toot of a whistle and a wait for cars to get out of the way and then they were off rumbling over the cobbles and turning left towards the chippie, The Batter of Bosworth. 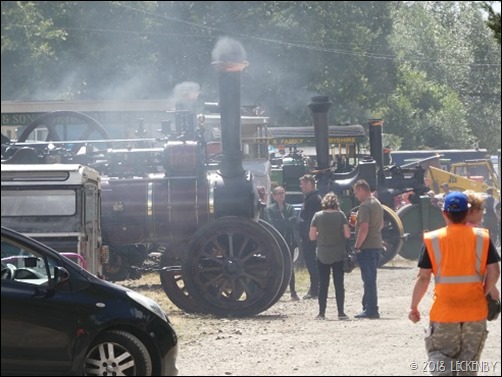 Back down the hill plumes of steam were rising near the station, so we decided to have a look. The steam was coming from full size traction engines all lined up, the railway only running diesel today avoiding any possibilities of sparks starting line side fires. We got so far and then realised that there was an entrance fee, £5. Not much, but as we only wanted a little look it wasn’t worth it. The 80 beers in the engine shed could be consumed by others today. 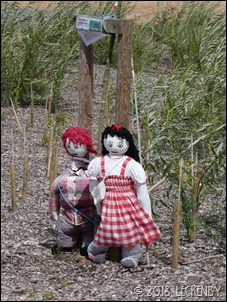 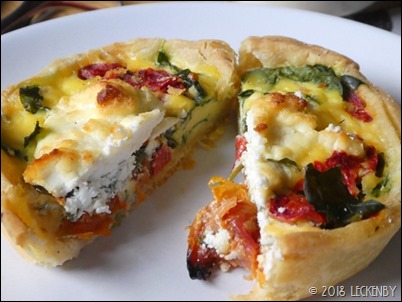 After eating our baked goods we pushed off. Gusts of wind were building, just what was wanted to assist with winding! Mick opted to cruise on ahead for a mile to the next winding hole to turn rather than reverse the 200 yards to the marina entrance whilst I stayed below to do a bit more model making. Winding was relatively easy, especially as  nobody was around to watch and we returned to fill with water. The moorings were still full, so much so that one boat was moored by one of the taps. Enough space for us to pull in and fill up, but should anyone else have arrived there would have been grounds for complaints. 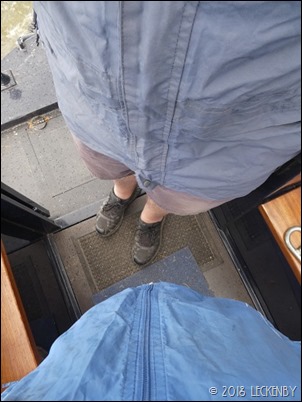 By now we had drizzly rain, our waterproofs were needed. Once I’d pushed the bow out I carried on model making leaving Mick to find us a suitable mooring. No need for trees today, in fact we wanted to avoid them if we could with strong gusts of wind and rain forecast. Back out into the countryside Mick tried pulling in a couple of times but the depth stopped him. It was proper rain now. Then within sight of the banners at the Battlefield Visitors Centre there was plenty of depth and room for us, no armco but chains would do. 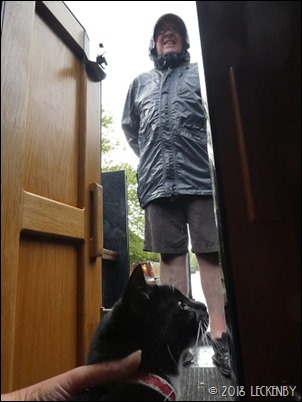 We could now settle for the evening, long pants and jumpers on, a soggy moggy coming and going, washing hanging in the pram cover, lots of fresh veg for our tea resulting in steamy windows. All the while listening to the rain on the cabin roof. 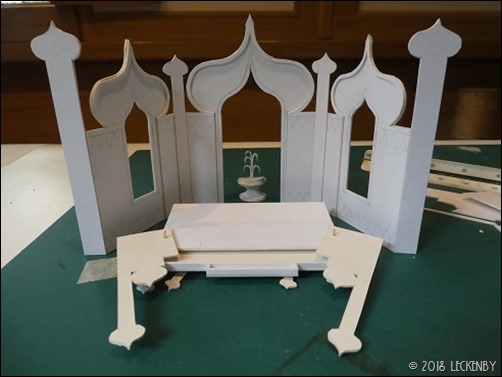