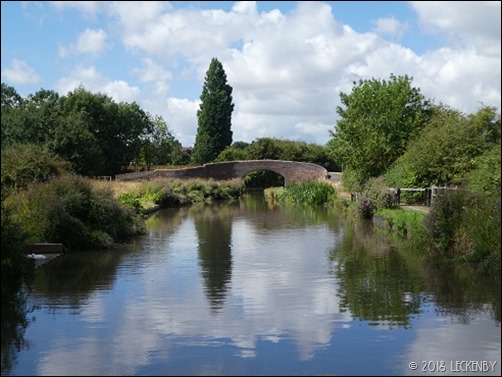 More miles to do and some more work on Tuesday. My model may have been ready for my meeting but there were also sketch drawings to amend and photos to take. So whilst Mick pootled us along back to the junction I sat below trying to get everything finished before we were on to new waters. I popped out at the junction to check the way ahead was clear and only had four blobs of glue to add to my model ( to make a stubborn piece stay upright!) when we arrived at Hawksbury Junction. Here we pulled in and added our rubbish to the bins before pulling along a short distance for lunch. By now my model and drawings were packed up and ready for the morning, I was free to enjoy the cruise into Coventry.

Places have reputations, the arm into Coventry is one. The schools having broken up and it being sunny ups the odds of trouble. If you listened to all the stories then you’d never go anywhere and we like to see for ourselves and make our own minds up. It’s all comparative. If you only cruise around Nuneaton and the long flat section up to Hillmorton, the Ashby would be the prettiest canal on the system (with the minimum amount of effort). Don’t get me wrong, it is lovely, but we’ve been to far prettier canals with stunning views which of course involves lots of locks. 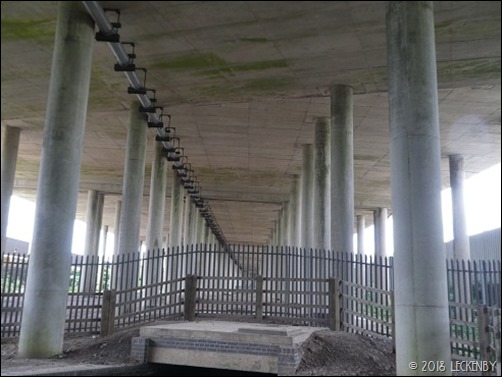 Heading into built up areas is better done in the morning, less chance of trouble, but we were setting off after lunchtime. We’d been warned of pieces of wood that kids put in the canal with string attached that get caught round your prop and the scenery that isn’t so good. Few cities have a beautiful route into them by canal, they were built to transport goods from industrial areas, so were never intended to be picturesque. We last ventured down the arm on Lillian to stock up at Tescos before we returned to Hawkesbury. 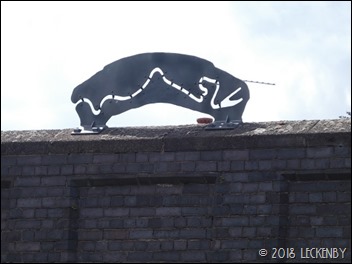 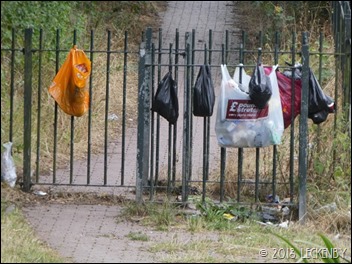 Our journey in was fine, we counted the ingredients of a Pina Colada floating past as we pootled our way along, one young chap offering us a coconut, we’d already seen eight others. No pieces of wood to foul our prop and we were lucky enough not to ride over supermarket trollies or have plastic bags slowing our progress. This was most probably due to all the plastic bags in the area having been used to collect rubbish and then being left on railings, handy for someone to collect, just not sure if they were aware though. Every footpath that came down to the canal had another collection of bags, at least someone was picking up the rubbish. 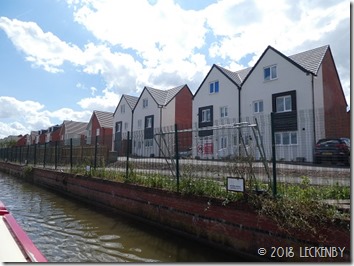 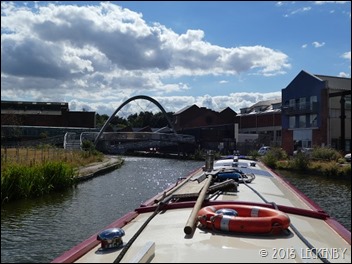 Where we’d winded four years ago there are new houses covering what had been wasteland. other new developments are being built and at Faraday Wharf the whole area has a modern spin to the old buildings. The steel structure left intact and then surrounded with new buildings. Here is a large digital and tech community which has start up offices and conference facilities. The grounds surrounding are well kept, just a shame nobody has adopted the canal side of the railings. 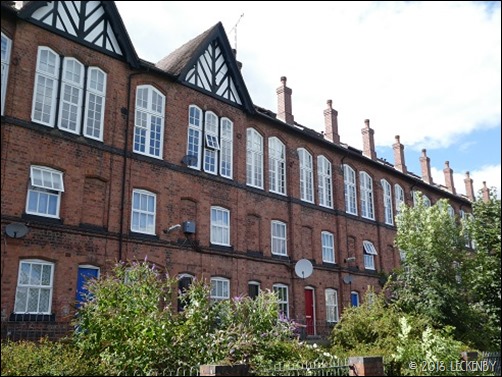 There have been all sorts of industry in Coventry. The most noticeable on our way in was weaving. Along side the canal stands a block of narrow three story high houses with tall chimneys, another block just around the corner. These were built by two brothers, John and Joseph Cash to house their weavers. Gardens to the rear, two storeys of house topped off with a third floor with large windows, where jacquard looms powered  by a central steam-powered beam engine, worked away producing ribbon. There were to have been 100 of these houses, but in the end only 48 were built. 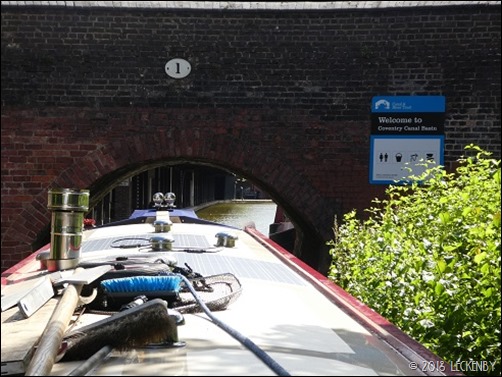 A couple of big bends eventually brings you to the final bridge before Coventry Basin. There is a sign for a 24hr mooring just outside opposite the water points, but someone has made this their home with a tent pitched with a canal side view. Ducking in through the bridge the basin opens out with two arms. One is used by a hire company, the other has 7 day and 48hr moorings. There was space at the end for us and an ideal spot for a supermarket delivery. 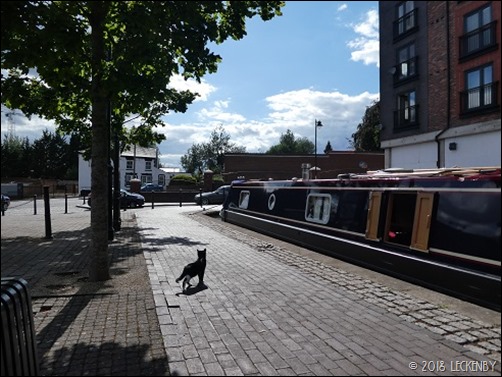 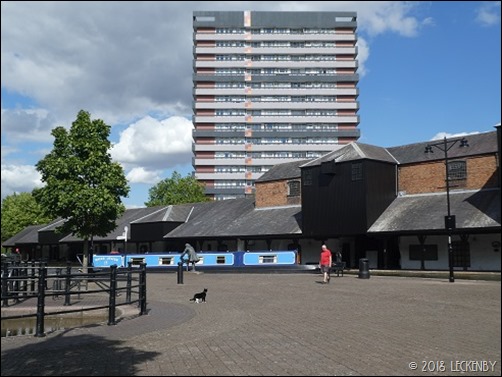 We’d tied up, all three of us had a wander around when people in smart clothes started to arrive. 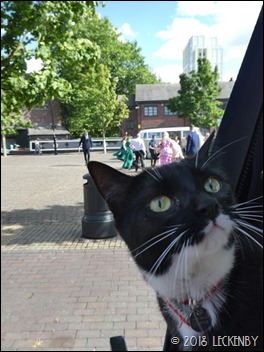 Then a VW camper turned up with ribbons on it’s bonnet, we’d moored up in the middle of a wedding photo opportunity! I turned my best side towards all the cameras and smiled my sweetest smile. Some little people even sat on my boat to have their photo taken, cheek! The reception was going on at a place just behind the basin, which meant we had some noise during the evening. More noise came from an expanding/contracting black van that parked up. A chap in the flats above didn’t like the heavy rock so after shouting for a while resorted to throwing a jug of water from his balcony, this got the drivers attention as his windscreen wipers started up. The music was soon turned down. After that we had a standard night in a city, some noise, but nothing out of the ordinary. 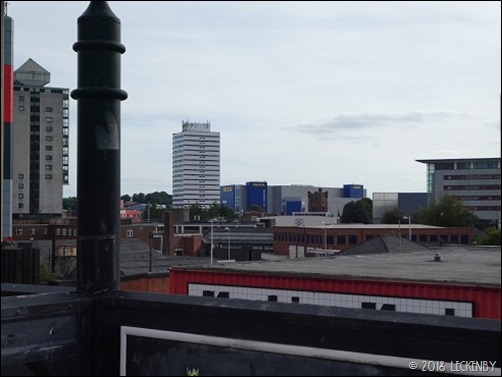 Wednesday morning and a walk across town with my model to the station. The canal basin lies just outside Coventry’s perilous ring road and the train station is on the opposite side. Here a concrete footbridge spans the speeding cars and gives you a good view over the top of the city. Then we walked in a straight line more or less through shopping areas, some seen better days than others, to cross over the ring road on the other side. The southern side is having quite a bit of work done to it, hoardings surround areas with quotes boasting why Coventry is so good. The next UK City of Culture in 2021, the area is likely to be on the up, new venues created, old ones refurbished, a lot of investment as happened in Hull. We wondered if Coventry will manage to get the city centre repaved in time for the year or would work finish in the autumn as it did in Hull! 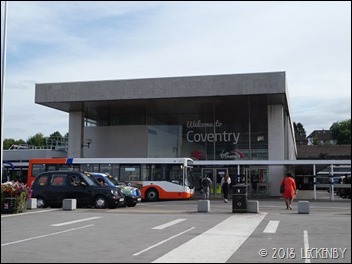 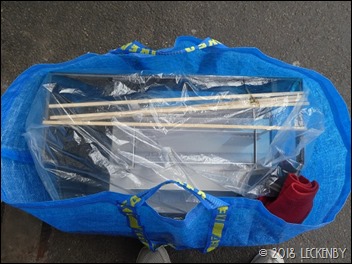 Two trains got me to Banbury, the nearest station to Chipping Norton where I was picked up by Will the Producer, this saved me a bus ride. Today was what is known as a White Card Model meeting. Myself, the Director, Producer and Production Manager worked through the show scene by scene with the model. All very excited, thankfully, we just have to find a way to be able to afford it. The budget is reasonable but very tight, the scissors may have to be taken to parts of my design once we get prices back from builders. Gemma, the Production Manager and I had a good catch up not having seen each other in about twenty years, we both started work on the same show at The SJT in Scarborough in 1996.

Two trains back to find Mick and Tilly on board. A Sainsburys delivery had arrived to stock up the wine cellar amongst other things. We had new neighbours and Tilly still wasn’t impressed by our surroundings. It’s s**t round here! Even if I walk low it’s still pants! Luckily Mick and I don’t judge a place purely by the number of trees and hunting possibilities.