It turns out that we are moored in the middle of where our friend Frank grew up. In the past he has pointed to the maps in Nicholsons, his sisters school, where he used to go and watch the trains, where he and his friends used to play alongside the cut. We took notice but never really clocked where these places were. Well just around the bend in front of us is Avril’s school and the Co-Op in Nuneaton is where Frank got his first football boots from, his parents lived near our current mooring and he would cross the bridge behind us to go watch the trains. We are in deepest darkest Frank Country 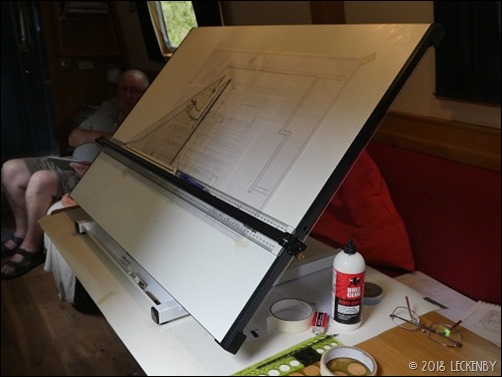 A couple of days of work for me. In the mornings the drawing board has come out from it’s slot so that I can draw up the set for a couple of scenes, then it’s put away to make space for me to make the model of those scenes in the afternoons. Sunday morning Mick managed to keep himself enough space to sit at one end of the sofa and watch The Great St. Trinian’s Train Robbery which just happened to be on. It’s still rather funny even if you are only listening to it. 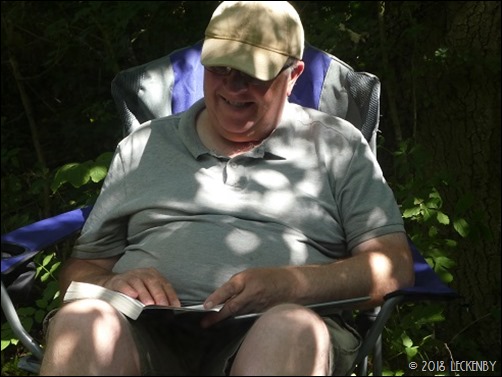 In the afternoon Mick had to relocate himself to the towpath for some space. He’s even opened up a book to read, we’ll see if he gets further than page 30 before it joins the other part read books onboard! 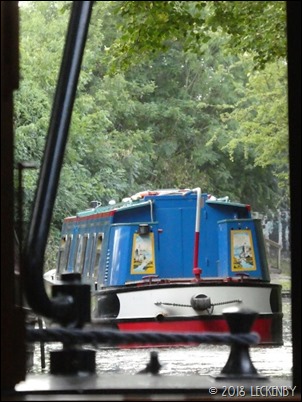 During the morning  plenty of boats came past, nothing unusual in that, it’s very busy along here. However one was strange. As it came past I waved at a lady inside the cabin, she waved back. I then looked up to see that there was nobody at the helm. Maybe they’d just bobbed inside to grab something? No the back doors were shut. It must have had remote control as the tiller was moving and the boat was in full control as it passed us and the other boats moored up. Early last year we shared Calcutt Locks with a chap who steered his boat from the lock top with a remote control. It’s just weird seeing a boat steering itself, like a ghost boat. 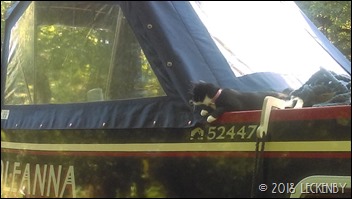 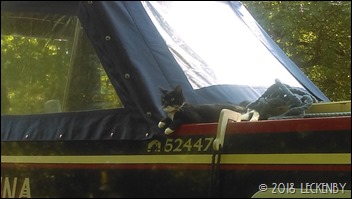 Late morning a boat pulled into the gap behind us. As he moored he spotted Tilly on the towpath, he’d keep his dog on a lead. The pram cover comes in handy for such moments. If I lie close to it, I can spy woofers along the towpath, but they find it hard to see me, only my head visible, even then most don’t see me.

A catch up with my family in London on the phone informed us that there was quite a lot of post. Some of it important for Mick’s pensions. So instead of us finding somewhere for it to be posted to, Mick decided to have a day trip to London to pick it up. After helping me get the drawing board out Monday morning he headed off to Bedworth Station to catch a train to Nuneaton and then into London. There was quite a bundle of post, some reminding him that he hadn’t filled a form in, other envelopes included items that needed to be included with the form, so the trip was worth it.

I made use of his visit by giving him a shopping list of items I could do with for my model. 4D is a great model shop in the East End, they sell just about any variety of tree so long as it’s to scale along with plenty of other scale things. I was after some lengths of wood and dowel and they were just the place to get them from. 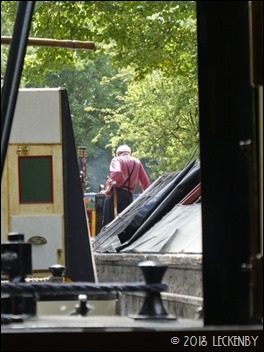 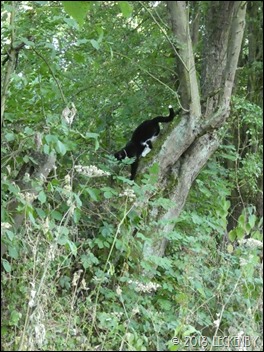 Tilly and I kept ourselves busy, she came and went having a drink on every visit, whilst I got on designing some boats. Two in fact, one for our romantic lead to woo his lovely princess in and the other more brash the Dame’s gin palace cruiser. Whilst I toyed with angles to create a suitably sized tuperware, numerous boats cruised past. I was surrounded by boats. Today has been one of the hottest so far, yet this didn’t deter the masses from cruising. Only about a third hire boats making the most of their holiday. There were several who pulled in for lunch taking advantage of the overhanging trees. One stayed for several hours, their big black poodle shouting as they moored up followed by smelly smoke every now and then.

Our mooring did well. Only about an hour of direct sunlight mid afternoon, which did heat up the cabin somewhat and necessitate me closing the hatch so that I could see what I was doing. But the rest of the day was nearly pleasant. 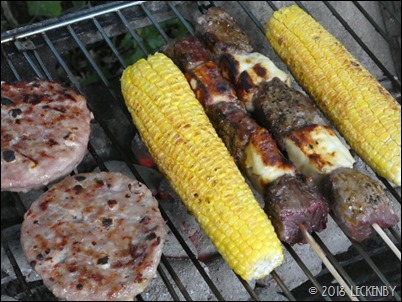 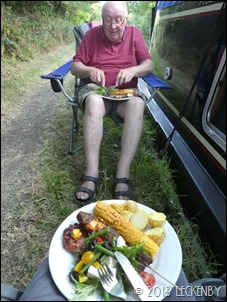 Once Mick was home and my model stowed away again we sat out on the towpath and enjoyed the burgers and kebabs we’d bought in Nuneaton. A suitable way to celebrate living onboard full time for four years. I so hope the bears are still alright guarding our possessions in the attic in Scarborough. 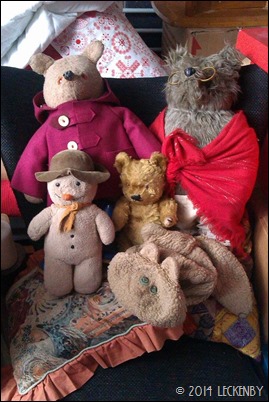