It means that I get to spend all day everyday out doing what I want to do. But having said that after four days and a couple of previous visits to this outside I had just about used it all up. Being outside all day everyday is exhausting. It would be stupid to come back inside when still allowed outside, so for the odd little snooze I decided to make myself comfy in the pram cover.

There were still friends to be found and I brought them back to be near to Oleanna, not inside as I’d have had to introduce them then and that would shorten play time! So a rustley area in amongst the trees was a great place to play, not too much friendly cover so I tended to win at hide and seek.

Tom must be getting bored, he even did some more washing of Oleanna! That’s three days running he’s had the buckets out. She’s hoping that he gets very bored and washes the pram and cratch cover soon. 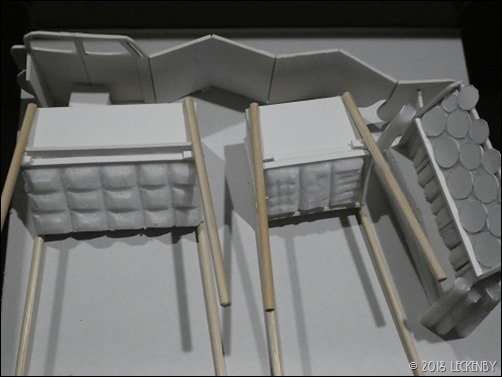 Out of the four days we’ve been here I managed to get nearly three days work done on my model. A rough plan of what to make each day means I know when I’m falling behind, modelmaking always takes longer than you think. Luckily my plan has six spare days worked into it. By the end of Friday I’d almost got to where I wanted to be and managed to have a chat with Gemma the Production Manager, there is a lot to catch up with as we worked together twenty years ago in Scarborough, I suspect we won’t run out of conversation before the show opens. 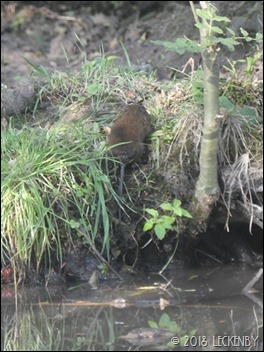 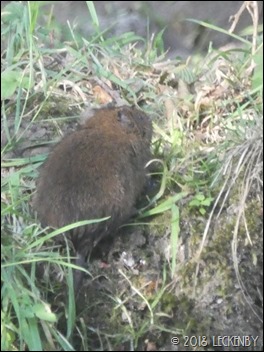 Saturday morning arrived and the need for some fresh veg, a newspaper, some water, a rubbish bin and a different outside for all of us meant we had a boating day. It also meant that Tilly wouldn’t get chance to make acquaintances with a Water Vole we’d spotted a couple of times. This morning it obliged us by sitting munching on grass opposite our bedroom picture window. Tilly was the one who spotted it first. 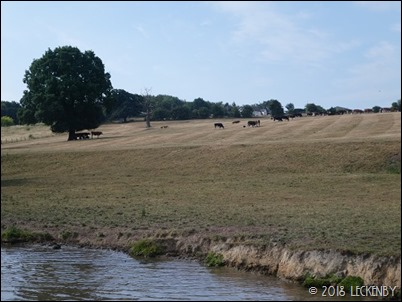 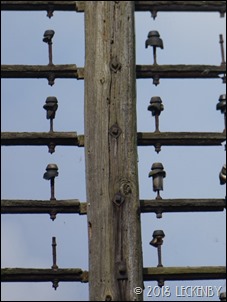 We let the morning rush hour pass before we ourselves pushed off and pootled to the winding hole just ahead of us. Here we winded and headed back past Springwood Haven heading for Nuneaton. The canal skirts around the town and other than visiting supermarkets we’ve not really had a look round. Today we moored up by Tuttle Hill Bridge and walked into town. 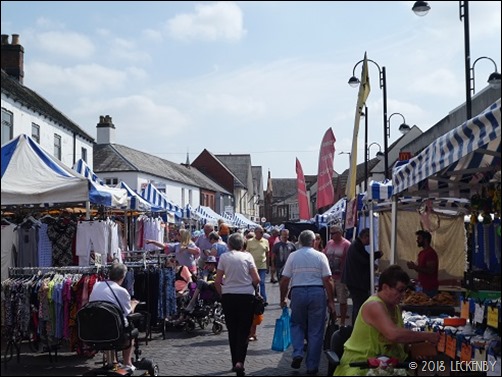 It being Saturday there was a market which was busy and far bigger than I’d imagined. We managed to buy quite a bit of the fruit and veg we wanted on the stalls but a few bits meant we’d still need to visit a supermarket to fill the gaps. My supply of tracing paper was running low, WHSmiths only sold A4 pads so we hunted round for Staples which luckily came up trumps with a pad of A3. I should be able to fit most of my drawings onto these sheets. It means more sheets of drawings, but they are a lot easier to get copied at this size. I also won’t have a huge roll of drawings knocking around the boat for weeks. 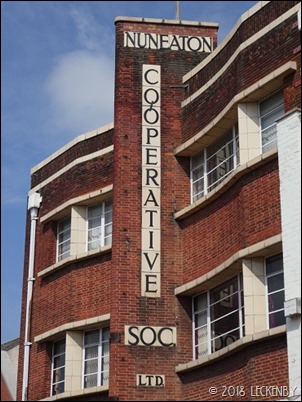 Amongst the none descript buildings of Nuneaton we spotted quite a few rather nice Deco buildings. The Co-op, sadly no longer a Co-op looked very fine with it’s name boldly displayed on the fin. 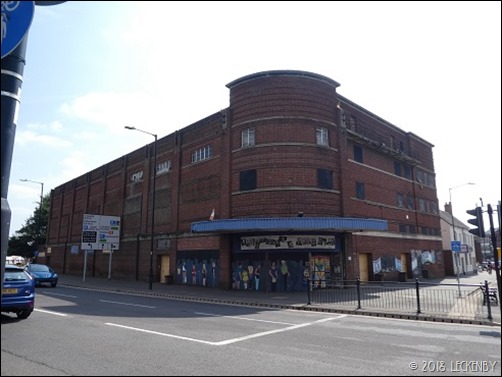 The Ritz Cinema also looks like it was once a gem. Frank did you ever visit it on a Saturday morning? (Our friend Frank comes from these parts and his Father is possibly the only person to have ever be sent away from Coventry). Sadly now closed the cinema is Grade 2  and was designed by Verity and Beverley for the Union Cinema Circuit in 1937. According to the Historic England website, you would enter the building on the curved corner into a foyer with a grand staircase, which led to a single large auditorium with a balcony. 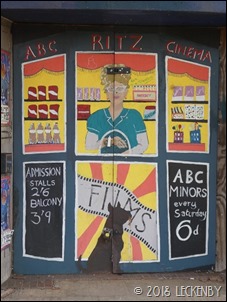 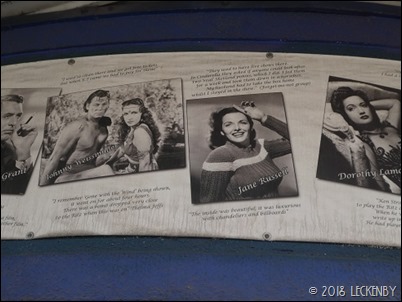 The decor is highly coloured incorporating Art Deco, Neo-Egyptian and Chinoiserie. A link to some very colourful photos here. Large fretwork panels of lotus leaf motifs and coffered ceilings suggest it was once a wonderful magical place to visit. Sadly the building is boarded up awaiting a new life, whether that involves being converted into a theatre (I know of one of those in Scarborough) or the owners are just waiting for it to fall down and the site then to be redeveloped, who knows. But certainly some of the locals loved this place. A mural on the doors reminds you of kids Saturday mornings at the flicks and pictures of film stars below the canopy conjure up the atmosphere. Not seen a picture of Johnny Weismuller in decades. 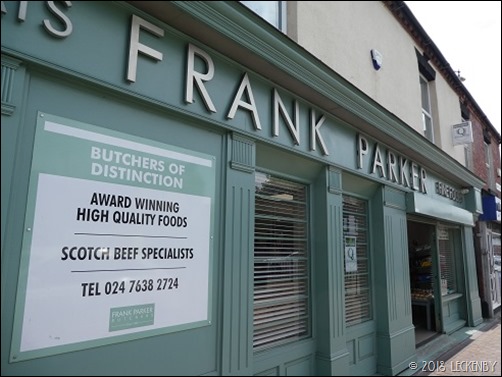 Last port of call on the way back to Oleanna was at Frank Parkers Butchers. I’d spotted it from the car the other day and on our walk into town the queue meant it was definitely worth a look inside to see if their boasting of being a Butchers of Distinction was correct. It was, so a pork and stilton pie along with a couple of burgers and steak and haloumi kebabs made their way into our shopping bags for a barbecue tomorrow. 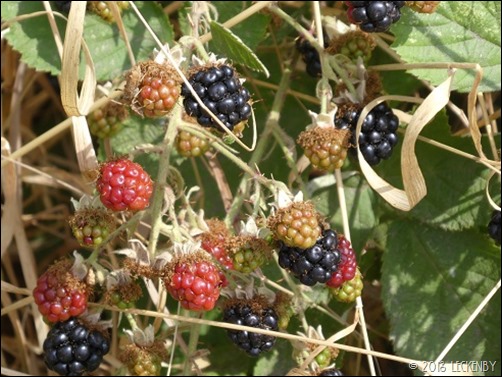 After lunch we pushed onwards Southwards. We needed water if nothing else today and the nearest tap was at Hawkesbury Junction a few miles away. On our route we made note of possible moorings again. If the forecast for the next few days is correct we’ll be wanting tree cover again. Today we noticed for the first time the amount of very plump ripe Blackberries, the best were around allotments in Nuneaton. Frank would have insisted on us stopping so that he could do his mountain goat impression to pick plenty. Maybe I’ll make some jam this year. At the junction with the Ashby we carried straight on, we may head back up there later in the week for a change of scenery, but we hoped today we’d find somewhere to moor ahead of us. 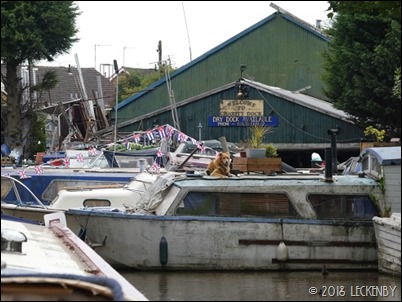 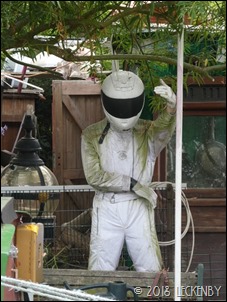 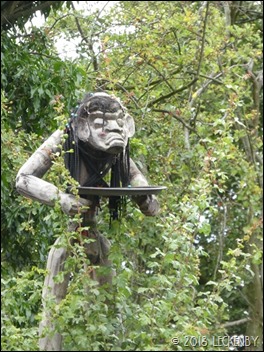 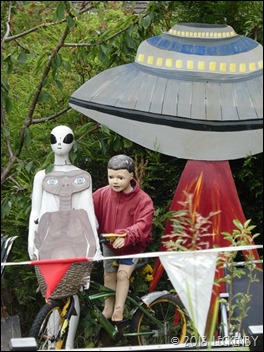 Any boater who has passed this way will have seen Charity Dock. Here there is a boat yard which has scrap piled up behind all the cruiser boats which block the entrance to the dock. Then along the linear moorings the residents have been creative with shop mannequins and all sorts. I was ready with my camera to play ‘Where is The Stig?’ The display changes quite frequently, around Halloween cobwebs and witches hats are added. Plenty to look at and today was the first time we’ve really noticed the tree covered in wooden masks. 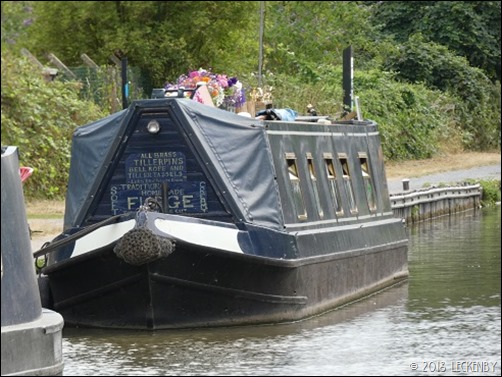 Hawkesbury Junction seemed busy but the water points were free. The pressure on the tap was tiresome so we made use of the time to chat to NB Timewarp who sell tillerpins and very tasty fudge. We’re hoping to get our old tillerpin of a cat chromed so enquired if they knew anyone. Limekiln chandlery at Stourport was our best bet, shame we didn’t know that when we were stuck there earlier in the year! 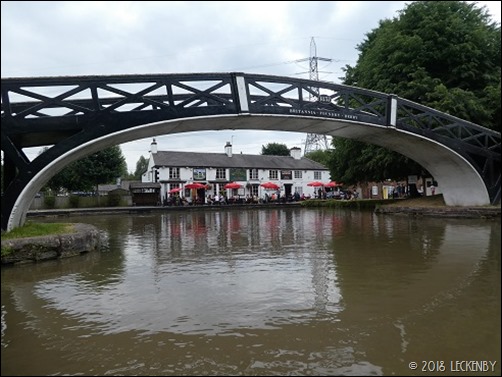 Once the tank was full we headed to the junction, winded and reversed to the loading mooring. We were going to off load but we didn’t think it would be a problem. Once all the packaging from the solar panel along with our waste was in the bins we were ready to find a shady mooring. A couple of miles back we’d noted a tree covered cutting with armco where there was space with another boat and we were soon tied up ready for whatever the next few days brings us.