With breakfast and the morning rush hour over I sat out to read Act 2 of panto before setting up the dinette for another day of work. 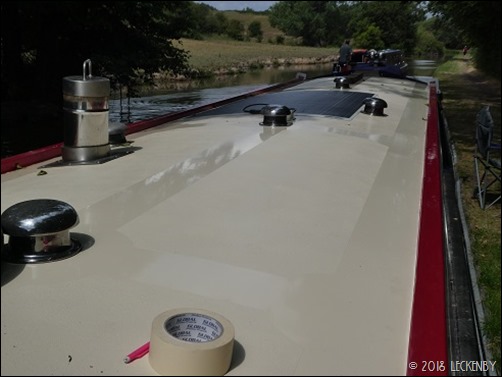 Mick gave the roof another quick wash and we waited for it to dry. Where better to store the solar panel other than on the roof. We laid it roughly in position.

Our original panel sits above the bathroom, just fitting between mushroom vents, the second one fits just behind it nestling between more mushrooms and the chimney. The box that connects the panels to the boat electrics was positioned so that we could add a second panel, so this now sits between the two of them.

Before anything else could be done Mick wanted to check that the panel worked. Nothing worse than sticking it down to discover it was faulty. The volt meter came up with the right answer and we could proceed. 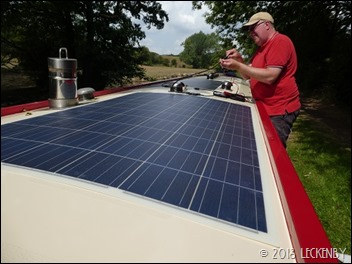 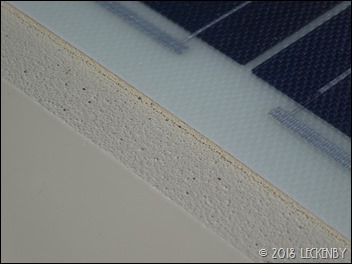 The panel was positioned centrally between mushroom vents and between the grabrail and chimney, leaving what we hope is a suitable gap for water to drain along the grabrail. Then we drew round it so as the know where to put the silicone sealant to fix it down. 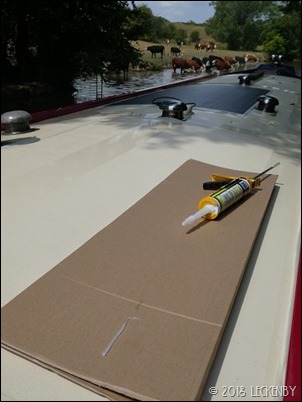 A wide band of masking tape was put down with the hope of containing any excessive silicone and giving us a neat clean edge once we’d finished. My concern was would the first bits of silicone start to skin over by the time we were ready to lay the panel on top. We’d avoided buying instant grab products so that we would have the chance to give the panel a bit of a squidge around before final positioning. A test was needed, not totally scientific, but worth doing. Some of the packaging was put on the roof in the sun and a bead of silicone applied to it and left for the length of time I thought it may take us to apply it to the whole area. Mick watched a stop watch and I made us wait, every few minutes checking on the sample to see if it had skinned over. After ten minutes I deemed that we’d waited long enough and there was no sign of a skin forming, so unless applying it to the roof rather than cardboard made a difference I thought we’d be safe and not end up with a lumpy bumpy panel. The panel we have is a flexible one, but that only really means that it is not rigid, there is only so much flex it is capable of, sitting on a curved roof is fine, but pulling it off when half stuck would not be good. 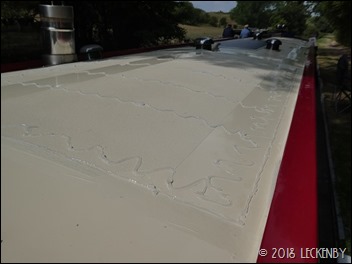 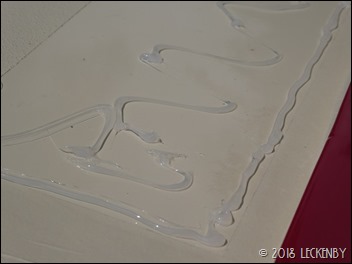 Silicone applied with a constant bead around the outside (hopefully to keep any water from creeping underneath, then a wiggle to help hold it in position and a few more across the centre for good measure. We lifted the panel onto the roof. Once in position we worked any air out from the centre before rubbing down the outside edge. Happy with position and adheardness (not a word until now) I tidied up the excess that had squidged out and then removed the masking tape. All very nice and neat. 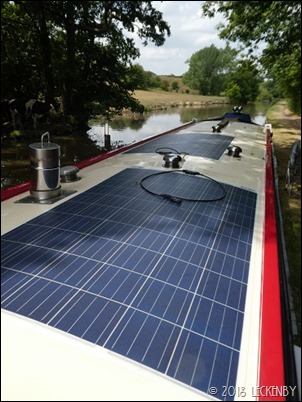 During the afternoon I got on with making my model whilst Mick decided to connect the panel. The box that covers the connecting wires was unscrewed from the roof. The panels come with connectors on the ends of their wires, but these are bulky. Finesse when installing our first panel had removed the connectors and joined the cables with chocolate blocks which were then protected by the box from weather. A quick call to Photonic Universe to check that this wouldn’t affect a warranty on the panel and all was okay. However the cables were thick, too thick for two to go into each block. Springwood Haven provided Mick with some spade connectors which he then crimped onto the cables which fitted better. Bigger chocolate blocks may be needed, but for now this would do. 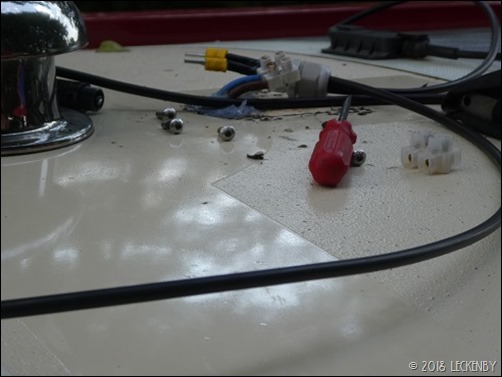 All of the fittings that are attached to Oleanna’s shell have a layer of what I call Black Tack. We used to use it every now and again at the theatre (can’t remember what for now, Ali would know though) and I believe it is a product that is used to hold car windscreens in. It’s black sticky and never dries out. Mick tried to save what had been under the box, but deemed it wasn’t suitable anymore. So with some of the silicone he made sure that the cables into the box wouldn’t allow water in and gave around the base a good amount to help seal this too.

I requested that I should be the one to tidy up afterwards, it should be a boy job, but patience for such things doesn’t come too easily to my boy. I had an inkling that it was already too late for this part of the installation to be as neat as the first part. The problems with clear silicone is that it is hard to see, it gets everywhere, onto everything and then onto other things as well! Mick had applied it to his arms as well as his hands, he was pretty waterproof. I quickly discovered that whilst it was wet it would gradually work off with white spirit. Next time I’ll be masking out the whole roof and putting Mick in a paper disposable suit before he is let loose with silicone again! 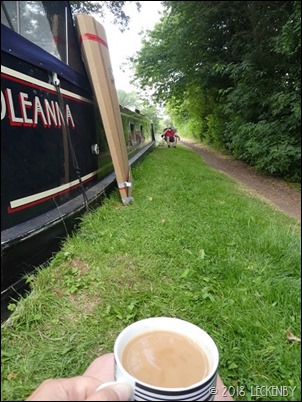