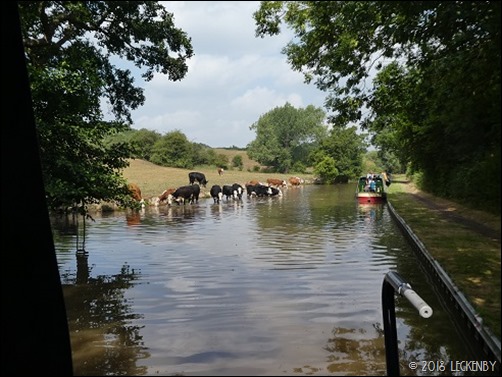 On Saturday Mick waited patiently for a phone call from Enterprise Car Hire. They had said they would pick him up sometime before midday which is when they close, so as time ticked on he decided to walk up the hill behind Springwood Haven Marina to the main road. This walk takes seventeen minutes in the heat of the day and as he ascended the hill he got a call to say they were on their way. Once he was back, with a newspaper, he checked in at the marina as to which our allotted mooring would be for the weekend.

We were given a storage mooring, which means there is no pontoon alongside, so access is only over the stern of Oleanna. Mick expertly turned her into the marina and then reversed her into the narrow space. About eight inches either side. A thinner rope was needed so that we could tie the bow to a post using one of the fender rings on the side of the hull. Once happily moored we got ourselves hooked up and the washing machine went straight on. Unlike quite a few marinas they don’t have a problem with boats hanging out their washing so our whirligig was going to be busy.

Mick kept an eye on all the electrical data and how our batteries were charging on a land line. We were using the washing machine most of this time, despite this our batteries charged quickly. By late evening the panel was saying Float. 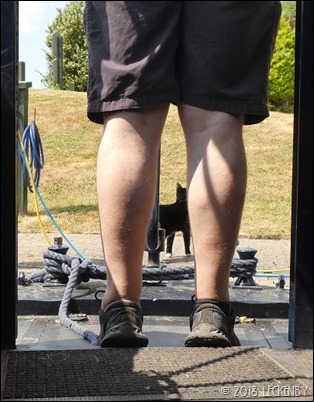 The marina requests that all dogs should be kept on a lead, but this does not apply to cats. Tilly would be allowed shore leave. So as the day got warmer and warmer and with a total lack of shade at our mooring we let her out a little nervous as she’s never encountered a marina before. What sort of rubbish place is this?! All the grass is super short, a few bits of friendly cover but they were too neat and tidy to have any friends loitering. After a while I decided to venture further, only to be told off for going on other peoples roofs. Tilly had the look in her eye that she’d roof hop all the way along the marina! A distance away behind a spiky fence there was plenty of friendly cover so I had a good look round there before she called me back. Well we wanted to do that big shop we’d missed out on a few days ago. Some big plastic tunnels looked interesting, but she wasn’t keen on me going in them. I was bundled back into the warm boat and left. 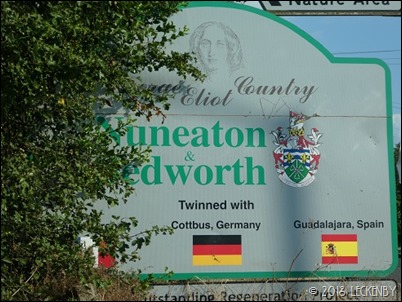 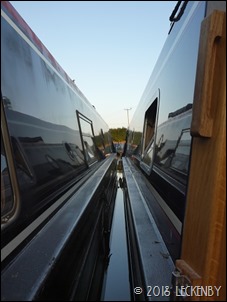 Big shop accomplished, apart from fresh things, we decided that we’d actually keep Tilly in. She may be welcome by the owners to wander around, but we weren’t too comfortable about it. Should she fall in between boats there wasn’t enough space for us to stand on gunnels to rescue her without boats touching, a crush incident waiting to happen. Also Cat Health and Safety didn’t like the thought of her hopping onto a dark coloured roof and discovering the science of how heat retention is affected by different colours. She was not impressed with our decision.

Sunday morning we were up very early for us. The car was packed with smart clothes on hangers, the magic food bowl primed, a very full bowl of water left in the shower and we were off just before 8:30am, heading to Scarborough for a wedding. A quick emergency hat purchase was needed, my boating cap, now sun bleached, not really suitable for a wedding so Sainsburys came up with something smarter and we headed to check in at our accommodation for the night.

Jaye and Duncan, who visited us in April, very kindly allowed us to persuade them to let us stay the night. As the wedding ceremony was to be held at the Stephen Joseph Theatre Jaye had been at work all morning helping to decorate front of house and the Round auditorium, whilst Duncan waited for us to arrive. Once we were all suited and booted we headed over to the theatre. 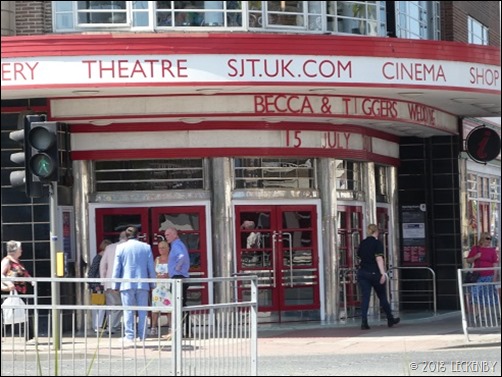 Mark (more commonly known as Tigger, he is ginger and quite bouncy!) and Becca met quite a few years ago whilst they both worked at the theatre. Tigger was a technician who now works freelance and Becca worked front of house as an usher, this is how they met. So the venue was very apt for them. Marrying on a Sunday is a common thing for theatre people as your thespian guests are more likely to be free and of course the theatre had no show on. The Round auditorium was almost full on three of it’s four sides an audience of around 300! 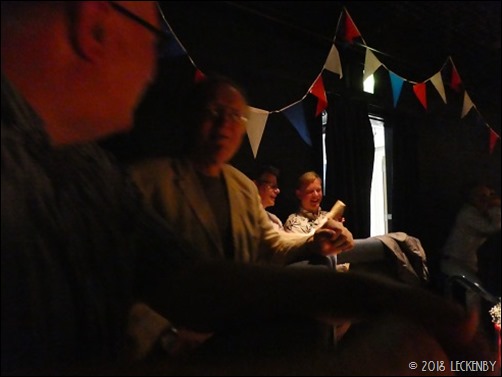 Once all the legalities were done, we were invited to look under our seats. One person on each row found a brown paper package and whilst the signing of the register was happening we all played pass the parcel, some people taking a very long time to pass it on to the next person (Frank Matthews!). 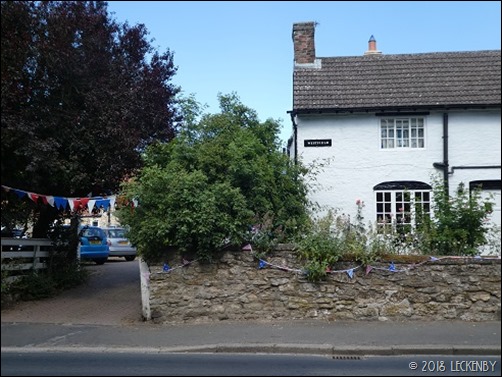 After drinks in the bar we were all ferried out to a nearby village where the Village Fete reception was set up in Becca’s parents garden. 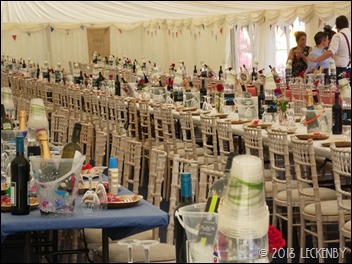 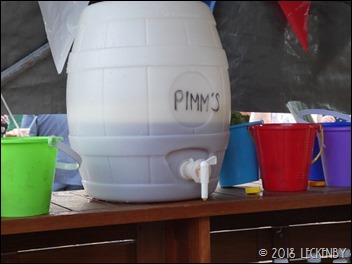 A very well stocked self service bar greeted us and a very large marquee stretched off down the garden. 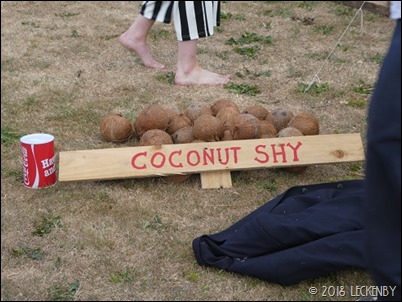 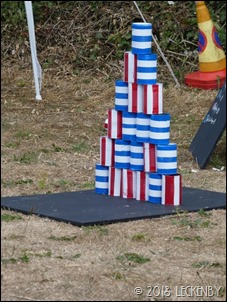 A coconut shy, tin can alley, tombolla, bouncy castle, bat the rat, kept us all occupied. I even won a yoyo on the tombola! 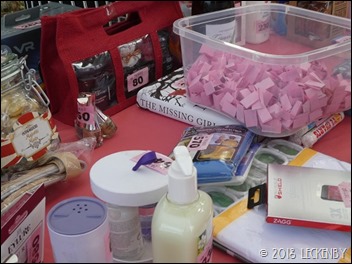 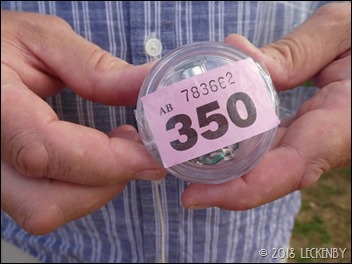 People had been invited to provide a picnic platter towards the wedding breakfast and there were prizes for the best ones. Plenty to eat, plenty to drink and SO many people to talk to. 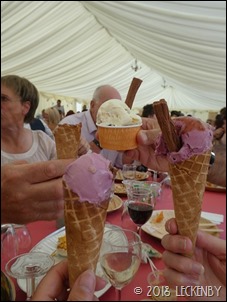 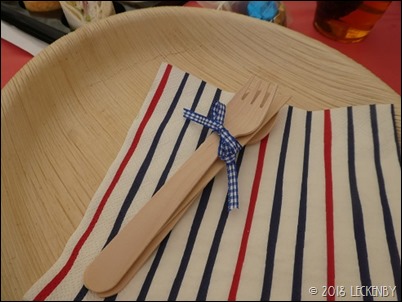 There was a lady with chilled medication who had a constant queue. 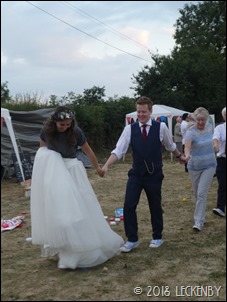 A ceilidh band which created a 200 person chain dancing around the fields. 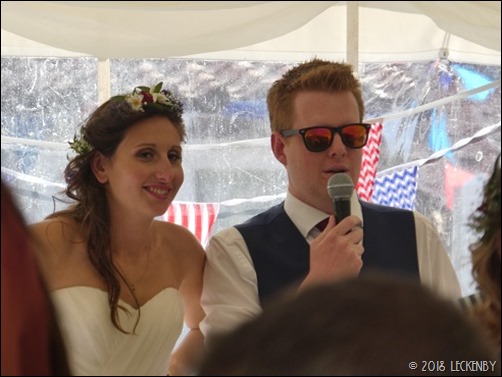 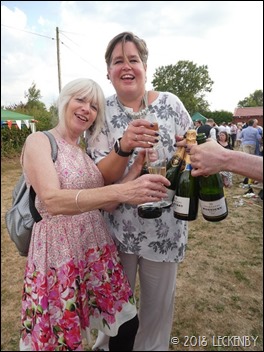 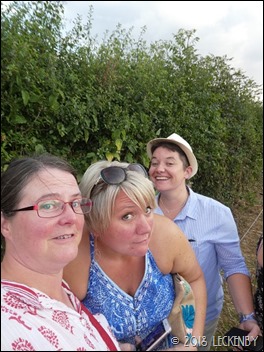 Fresh pizzas were being cooked late in the evening. A great firework display and disco to follow. What an afternoon and evening, everything had been thought out so well. 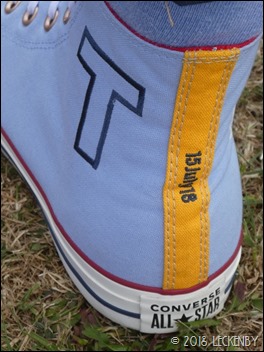 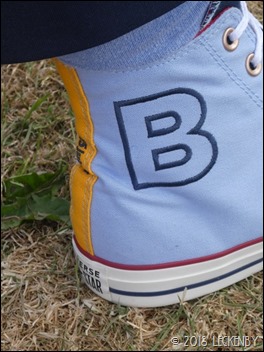 Oli, Jaye and Duncan’s son gave us a lift back into Scarborough where we collapsed on sofas with mugs of tea and continued chatting with horse voices. We’d left plenty at the party which could well have continued into the early hours. A wonderful wedding for a lovely couple, whom I’m sure enjoyed the day twice as much as we did.