Not far to go today to our rendez vous for shopping tomorrow, were we going to have the same problems finding shade as we did yesterday? Before we pushed off we decided that if there was nowhere suitable to moor before the A5 Watling Street or on the 48 hour mooring just past it then we would cancel our order, we’d be able to manage for a few days, there’s still those tins of carrots I bought for emergencies back in 2014! 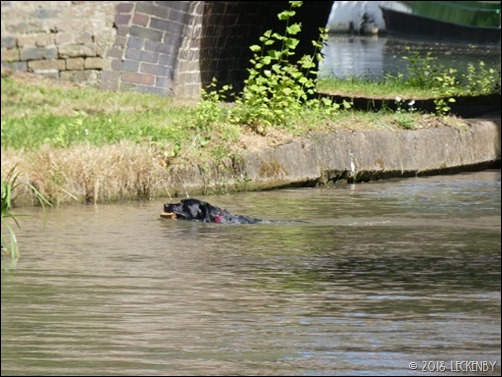 The sun was back out and even though I’d put on a longer sleeved t-shirt and plenty of new suncream, I could still feel it zoning in on me. Over the three miles back to Hinckley few moorings showed themselves with any shade that would last the rest of the day.

The water point has a handy layby and a bungalow next to it, giving you an address for your shopping to be delivered. There was one tree right at the tap, none further down. Our delivery was mostly going to consist of cat litter and boxes of wine, things that are heavy and bulky to carry back from a supermarket. But the choice of white wine boxes was very depleted, so I’d actually opted for a couple of bottles instead. This and no trees made our minds up, we cancelled our order whilst waiting for the water point to become free. 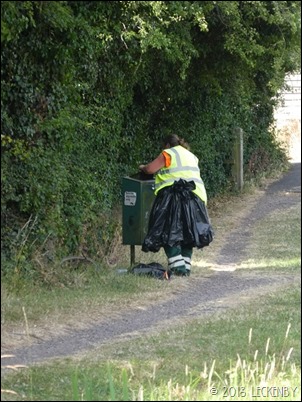 Once the tank was full we pushed onwards to find shelter further along, reducing our cruising time for tomorrow. Now of course the sun hid behind lots of cloud as we wound our way around a few bends. We’d checked on Waterways Routes for moorings along stretches of canal running north to south, these give more shade in the afternoon. Just half a mile further on there was a stretch of armco with trees, we couldn’t tell if they were high enough to give us sufficient shade as the sun was well hidden behind cloud! Pulling in there was enough depth and no dogs for us to worry about. Why hadn’t it been like this yesterday?!

7 hours! Fantastic!! No going on other boats, well there weren’t any so that was alright. There was a big field that someone had dug up, but the earth needed a bit more sorting, so that kept me busy for ages. They just sat inside, Tom watching the bicycles and she said she was working. Apparently we won’t be able to play chase the stick quite so much because she has to work and Tom’s not very good at it. So I’ll just have to keep myself busy.

A glance up from emails to nosy at a passing boat, green, spotty curtains, that Carefree Cruising swirl on the bow. Was it? It was. NB Winding Down our old share boat. We’d wondered if our paths would cross now we are close to her home mooring. No body we recognised on board, she came in to moor a little behind us, so we had to go and say hello. 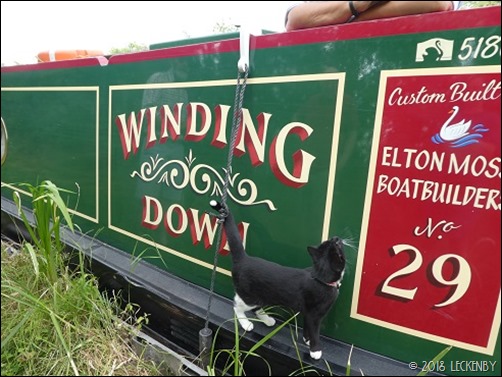 Richard and Jan were on board and they must have bought their share of NB Winding Down shortly after we sold ours. We had a long conversation with them, catching up on various bits to do with WD and the syndicate. Curiosity eventually got the better of Tilly and she made her way along the towpath to see why we were stood at another boat. The rules state no going on any other boat. But this one was different! This was their boat before they were yellow, so I was allowed a nosy. It had a cat walk so I had a look in through all the windows. Nowhere for me to sit and look through the windows at the outside other than in the kitchen, I only look out of those when nobody is looking! I did get told off when I wanted to look in through the back doors though, apparently ‘No pets allowed!’ How rubbish is that! Anyway I’m not a pet, I’m a cat!!