Alarm set this morning, not too early but with the hope of setting off at 8am so as not to be doing too much at the full heat of the day. Our yellow water tank needed emptying before we left, holding us up a touch, which was maybe a good thing! 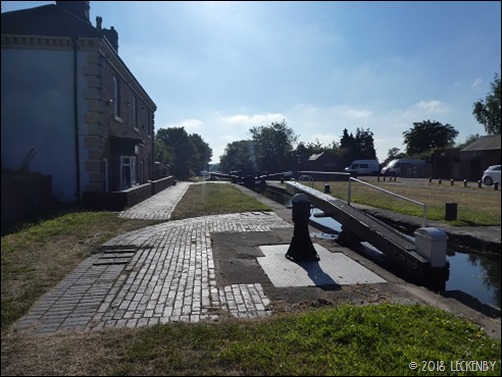 We got ourselves and Oleanna ready, opened the top gate of the lock in front of us at about 8:15. A C&RT van arrived with the two chaps we’d seen yesterday at Ryders Green, one hopped straight out with windlass in hand, walked over and lifted a bottom gate paddle on the top lock, Mick was just closing the gate, we were instructed to stay put whilst he walked down the flight to check levels. Oleanna began to lower in the lock, Mick opened a top paddle as we realised they were letting water down the flight. 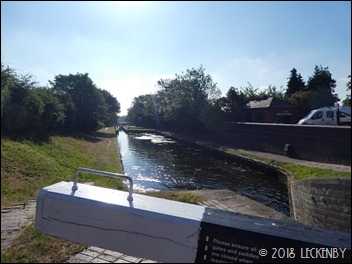 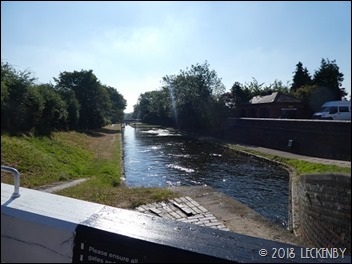 A quick look into the pound below and the level was obviously down by a couple of feet. This was also the case down through the next few pounds in the flight. Paddles and gates had been left up at every lock in the flight by the chaps who came past late last night. Maybe they couldn’t read the big signs telling you to close everything up behind you! Yes there is a case of leaking gates not helping, but an extra minute per lock to close up would have saved a lot of water being lost overnight! Today because of the dry weather some canals around the country have put into place time restrictions on lock flights to help preserve water levels, the fellas last night certainly wouldn’t help.

The chaps in blue were on the case, they must have known before they arrived with us. They’d been to open up at Ryders Green letting the guilty boat through at 8am, the chaps on board had said that they had just bought the boat and were new to boating. The Lockies laughed at the thought of them trying to reach Kidderminster by the end of today when we told them, no chance! 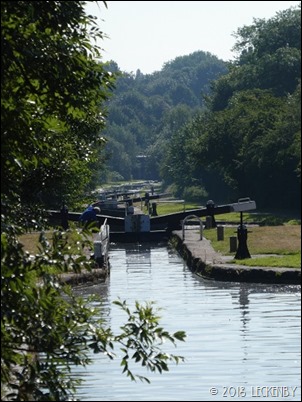 One chap went ahead closing gates and paddles where needed and lifting others to let the water down in a controlled manner whilst we sat in a lock with water flowing past us, all being let down through the paddle gear. This stops the build up of silt which would stop you from being able to close gates if they’d been left open. Once the pound ahead had recovered enough for us to get over the cill we were locked down to repeat at the next lock as the pound below filled up. This gave us plenty of time to chat with one of the Lockies. They didn’t blame us for not having walked down to close up last night in the dark, apparently we could have called the Hit Squad out who would have turned up with torches

At the end of May the level on the Wyrley and Essington Canal had dropped, this is a huge pound possibly over 40 miles. The two chaps who were with us today set off on foot to walk the towpath to see if they could work out where the plug had been pulled. They both could see the direction the water was flowing and walked towards each other until they came to where there was a collapsed culvert, this was the culprit. The culvert is one belonging to Severn Trent water so they are in the process of sorting it out. We asked if the canal was likely to reopen in a weeks time as hoped, or did they know if works would over run. We didn’t get a yes or no, most probably because it is out of C&RTs hands and Severn Trent are needing to do other things at the site other than just the culvert. 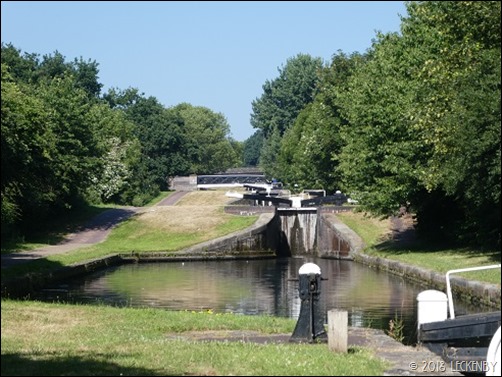 The chaps gradually worked us down one lock at a time constantly letting water down the flight. At lock 5 we were given the go ahead to carry on on our own, one pound was still a little low but we should be fine to get over the cills. They waved us goodbye and headed off to check further down in case last nights boat had left every lock to happily drain overnight. 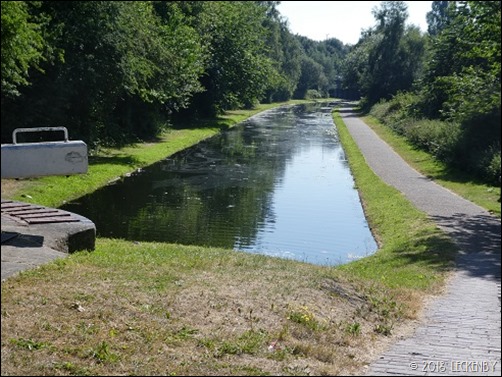 When we reached Lock 10 we could see that the bottom gates at Lock 11 didn’t leak that much as the long pound here looked more like a lake in an ornamental garden of some stately home, full to the brim it was. 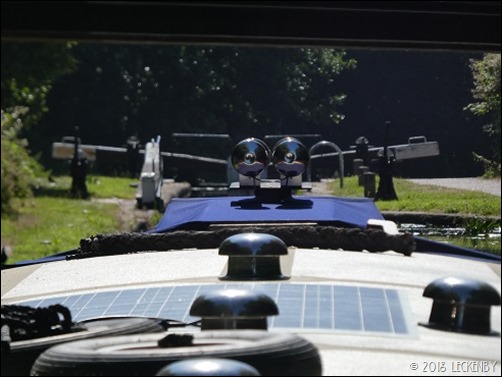 Sure enough when we arrived the top gates were open and both paddles up. The next two had closed gates and one had nicely drained as a paddle had been left open just enough. On leaving every lock today we made sure gates were closed and paddles were where they should be, closed. 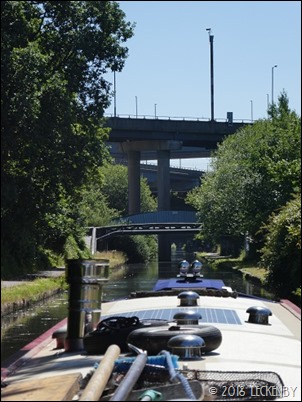 Up ahead behind a canal bridge we could see the start of all the concrete bridges that make up Spaghetti Junction. 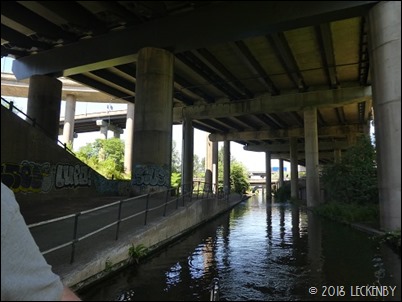 Curling around each other, layer upon layer above our heads cars and lorries wove themselves in directions they hoped were the right ones. 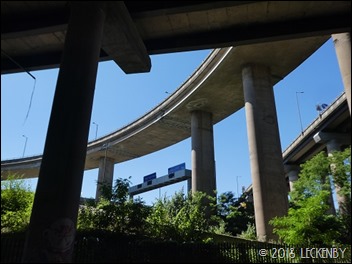 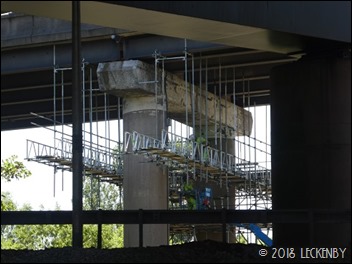 I’m not sure I’ve ever driven this stretch in a car and now that I’ve been under it I’m not sure I ever will! Some of the roads are held up so high by so little structure and other sections have so much scaffolding beneath them. Quite an amazing sight which my photos don’t really do justice to. Link to video 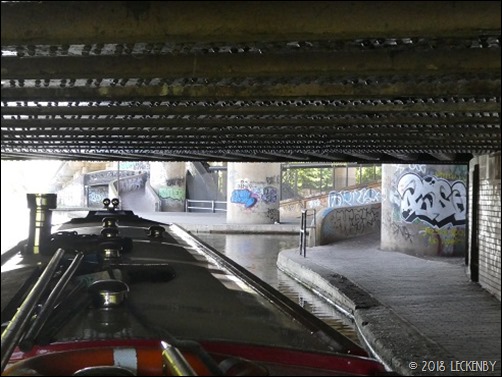 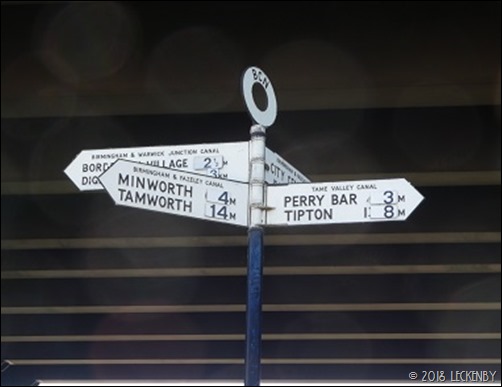 At the junction he was able to turn straight onto the Grand Union as his boat was only short, this would have taken some negotiating for us. 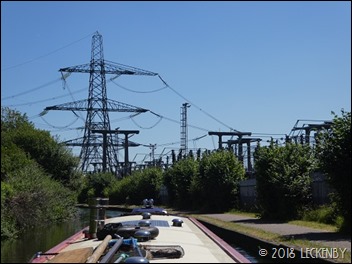 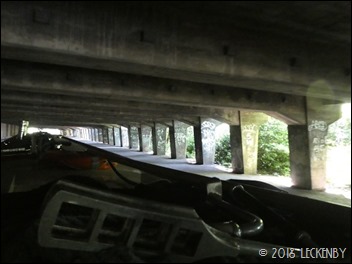 As the roads over head subsided a large electricity sub-station takes over followed by a factory which was built over the canal. This creates a kind of tunnel but with light coming in from one side thankfully as our tunnel light is still out of action. 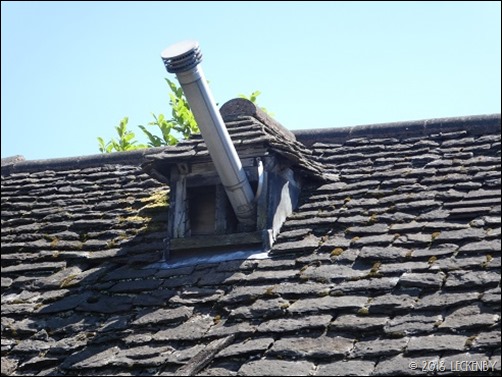 Hot and hungry now we sought out a shaded mooring for some lunch. Bollards appeared under plenty of trees and we pulled in just before Butlers Bridge. We still wanted to get further, even the Lockies had suggested getting through Minworth before stopping for the day. So with a second coat of sun cream we pushed on down through the next three locks and then started looking for some shade. We’d hope to reach the Dog and Doublet today, but the sun was too strong for us to work our way through the remaining locks. A few canalside pubs with moorings came and went but none had shaded moorings. Then there was a length of armco with several big trees, time to pull over, there was just enough depth for us.

Here there were trees, she took her time in letting me out! Freedom at last in what looked like a good outside, lots of trees, sideways trees and friendly cover. The only problem was getting to it! There was a big green mesh fence that was hard to see from the towpath, how rude to have such a playground and then put it out of reach like this! It took some time, but I found a way through. Climbing began, both up and down as I was joining the trees halfway up, unusual. There was lots to explore on the lower level and this kept me busy for quite sometime, no friends though.

Up above I could hear her calling for me, so I replied. I looked around. How had I got here? She was up there and I was down here! MUM!!! MUMMMMM!!!!!! I walked this way and that shouting all the time so she could hear me. She then walked the wrong way, could she hear me?! Was I going to be stuck here?! It had seemed interesting to start with, but now I didn’t want to stay here the rest of my life!

All she kept saying was ‘You got in there!’ ‘Numpty bum!’ Not helpful.

Then I spied a tree, quick calculations for a climb, jump, scrabble up a bank avoiding the fenced cages, a bit more tree and was that a gap in the fence? It was worth a try, my calculations were correct and I popped out of the friendly cover as if nothing had happened, she’d never know that I’d got quite concerned down there. 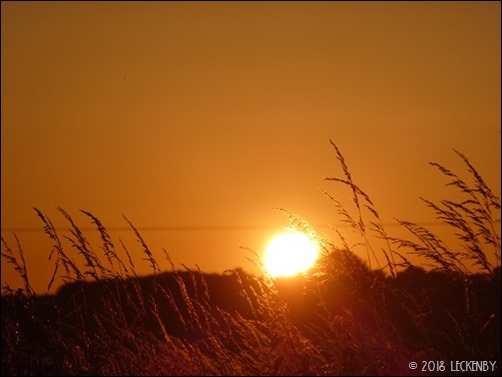 Relived to have a cat back, and not have to find a key holder for a factory that had closed for the weekend, we had a quiet evening in the shade over looking a field that stretched off into the distance as the sun set. We like big cities for a while but it was nice to be back in the countryside with the summer breeze rustling the branches.