Sheepcote Street Bridge to the other side on the cut
It’s great when someone decides that they should be heard in the early hours of the morning and such people tend to congregate around city centres. The chap last night didn’t seem to be shouting about anything of great importance so I decided not to wake Mick up. However by 6am boats were starting to move. Gearing up their engines, that obviously needed to warm up for a good fifteen minutes before setting off. Was it really worth trying to go back to sleep? Well in the end I succeeded for a while longer. I have no problem with people moving off early, we do it on a rare occasion. But we tend to prepare ourselves and the boat so that all that is left to do is start the engine up, untie and push off, taking our noise with us.
By the time we’d had breakfast the moorings had thinned out somewhat, we decided that we’d rather be moored on the other side of the cut so that we could open the hatch without too many folks having a good nose inside. So we untied and pushed over. The bollards here are just the wrong spacing for our length, too close together to do innies and just a touch too far apart for comfortable outies. We nudged up to the next boat, not wanting to leave a git gap and tied our ropes at their extremities. We’ve been here once when some boats were untied during the night, so Mick added a cable tie around our T studs to make this not such an easy jolly jape for someone. 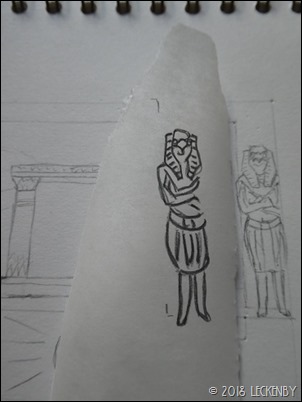 I got on with more sketching whilst Mick had a look at our tunnel light. He checked the bulb which was okay, then found some dodgy crimping of cables. This was then followed with the discovery that the plug had suffered from weather damage and fell into pieces when he undid it. Was it best to replace the plug or rewire the lamp bypassing it. The horns have the same set up. It was decided to find a replacement plug and see how that goes, if it happens again then it will be bypassed. 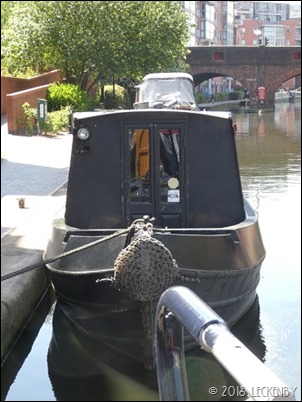 Late morning a familiar looking black boat poked it’s bow under St Vincent Street Bridge, a black long eared dog ran up and down the roof, NB Blackbird. Our meeting had been arranged on what may be their final cruise on Blackbird. We’d hoped to be able to help them down Lapworth, but their delayed departure from Chester meant we’d meet in Birmingham instead. They pulled in behind us where there was plenty of space. Hugs all round.
Bridget and Storm have been travelling with their friends Andy and Mandy for most of the last week, having put Blackbird into turbo cruising to catch them up (Turbo cruising doesn’t mean they go any faster, it’s just they keep on going and going and going when we would have long since stopped for the day). Around an hour after they’d arrived Mandy and Andy pulled up too, having had a more leisurely start to the day. By mid afternoon the moorings were full including a few git gaps! 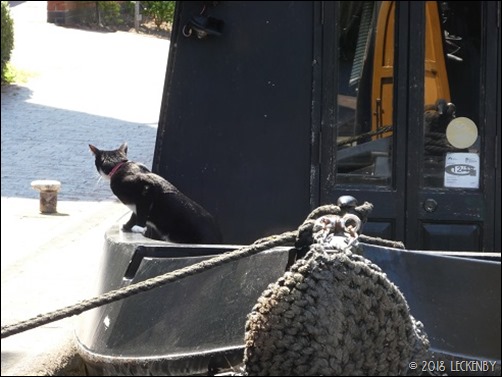 Mick headed off to try to find a new plug whilst I chaperoned Tilly out the back. This side of the canal is more interesting to her, but the foot fall meant I wanted to keep an eye out for her safety. Thick sideways trees that are hard to tunnel through, the odd (and I mean odd) tree. It’s okay but smells too much of woofer round here. She needed to be kept company so after a good nosy around I sat in the pram cover and had a snooze whilst keeping the mop warm.
Mick had no success, so a new plug and socket (just in case) have been ordered to be delivered to the nearby Post Office that does Post Restante. 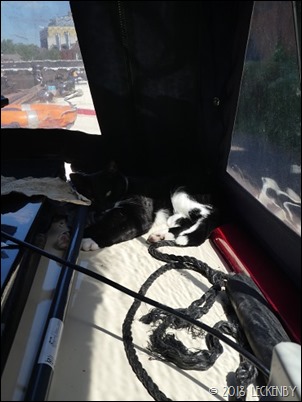 In the evening we all gathered and headed to Pizza Express where there would be more room for the six of us than on one of the boats. After moving to a quieter position in the restaurant we all ate and chatted away the evening. Andy and Mandy retired early whilst the rest of us went on for a pint. First we tried the Prince of Wales a pub highly recommended by Storm, but sadly no lights were on and the premises are awaiting someone new to take over the beer pumps. The Malt Shovel was second choice but had a selection of beers to choose from and comfy chairs, so we settled down for the rest of the evening.

0 locks, 60ft across the cut, 1 solar panel staying in the sun for most of the day, 6:15, 12 sketches, 24 egyptian statues, 1 tunnel lamp in pieces,  1 corroded plug, 1 black boat, 1 black dog, 2 friendly faces, 2 new boater friends, 6 pizzas, 1 bottle of wine, 6 pints, 2 glasses of wine, 1 big catch up with Blackbird.
Tom from Waiouru has worked out what has happened with blogger and comment emails. He has also worked out how to fix it. For instructions on what to do go to his post here. Thank You Tom