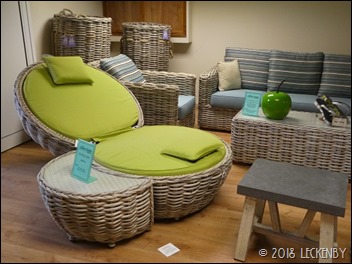 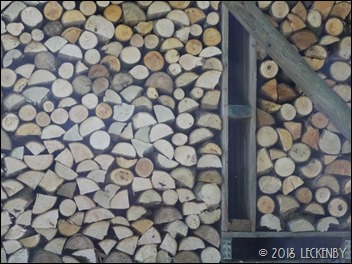 NB Escapology and the hire boat both moved off before we’d even thought about it this morning. We wanted to have a look around Yew Tree Farm Shop before we left. The biggest log pile I’ve ever seen was in the making by the entrance just across the way from a large area filled with garden furniture and general tat that we get to see in lots of canal side gardens. So this is where you can buy a life sized gorilla or a Tut tut. Inside were some seats that must have been influenced by the Act 2 sofa in Sugar Daddies, an Ayckbourn play, only this apple chair was more tasteful. 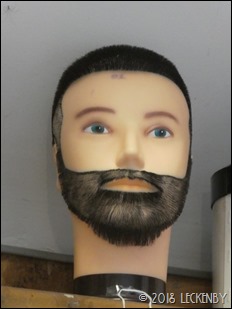 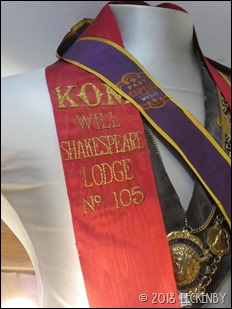 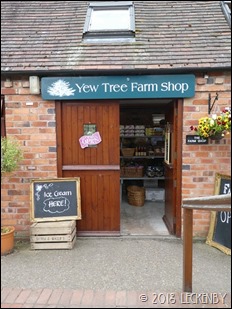 There are plenty of other shops around a courtyard, you can get your hair done, watch chocolates being made, buy chocolates, buy a bikini, look at antiques, buy Will’s Lodge sash or a mans head with designer stubble (a must have for all boaters). The actual Farm Shop was a reasonable size and had some nice looking bread and cakes. Their meat selection was on the low side, but they did have some of the rather tasty pies we’d bought at Pershore carnival. With our fridge still full we walked away empty handed. 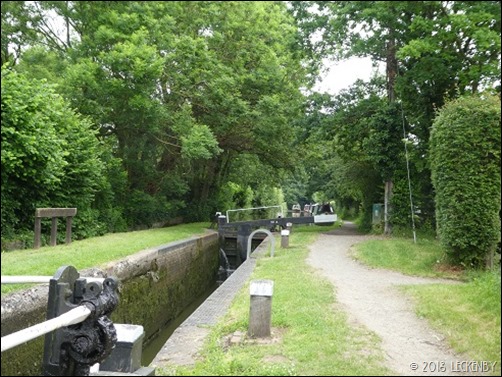 We pootled the couple of miles to the Preston Baggot Locks, the bottom one in our favour. As we started ascending a boat appeared up ahead along with a chap walking with windlass in hand saying that they’d just been stuck at the next lock for an hour and a half as a boat going up had got stuck in the bottom lock gate. The silhouettes of two C&RT chaps had just been seen returning to their van with their box on a long pole, problem solved. Another chap came to watch what was happening, he was on a hire boat and so far they’d only done this one lock. We were both warned of the gate up ahead (now cleared) and of a troublesome paddle a little further on. 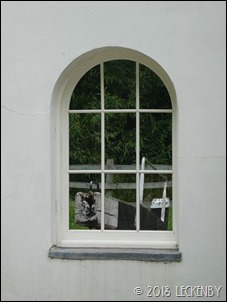 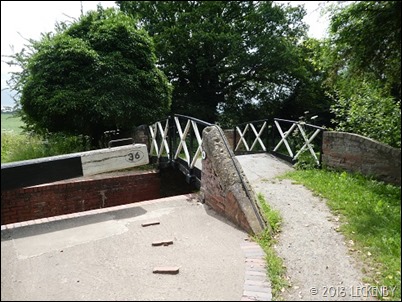 Sure enough at the next lock there was a pile of wet twigs and mud alongside the hedge, the gate opened easily and left us enough room to get through, the C&RT chaps had done their job. We carried on to the next lock of the three, Easter Egg Lock. In 2015 we had an easter egg hunt for my nephew around this lock, he of course had to get the most chocolate, leaving us with a pathetic collection of eggs on the boat. As I was waiting for Mick the chap from NB Escapology came riding by on his bike, they were stuck at the next lock, the paddle gear simply wouldn’t move, he rode by hoping to catch the C&RT chaps who had long since gone. 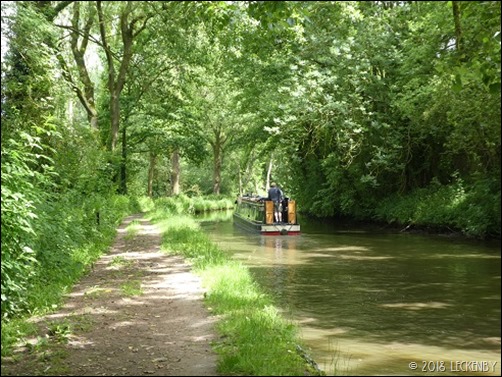 We made our way up the lock and arrived to see two waiting boats. We pulled in as best we could between them, but the pound had dropped quite a bit so we could only get the bow close to the side. We did our best to tie up even though we were aground and walked up to have a look ourselves, it must have been around 1:20pm and the paddle wasn’t going anywhere! The problem with this stretch, as with others on the network, is that there is very little if any mobile signal. The chap from NB Dolly had tried calling C&RT and got through, but they then couldn’t reach the local team. The chap from NB Escapology arrived back having knocked on a house door to borrow their landline and also called in the fault. Both our phones had no signal, but our Emergency phone on a different network did, so Mick called too, reaching the local office. Then we waited. I opted to have some lunch and put the kettle on. 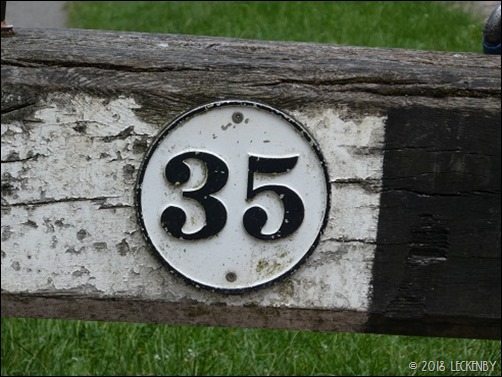 Reports that a man in blue had arrived, had a look and then returned to his van for some tools came through so a crowd soon gathered. The chap who looks after this stretch had just finished sorting out a low pound above and had thought his day would get better. The Stratford Canal was built on a shoestring to start with, all the mechanisms poor versions that other canal companies wouldn’t use and when the canal was restored this was also done on a shoestring, so what C&RT have to work with isn’t the best around here. 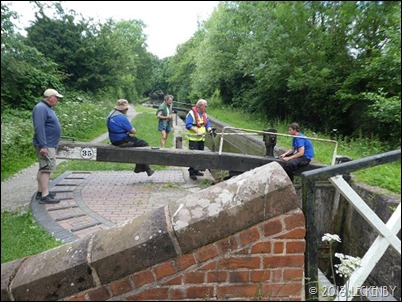 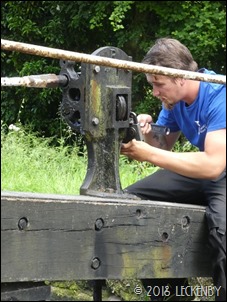 The Lengthsman (most probably not called that anymore) comes down the flight twice a week clearing behind the gates to reduce problems with them as twigs and silt easily build up behind them. He tries to do this before the weekend when only one chap gets to look after the whole of the Stratford Canal from Kings Norton to Stratford, but still they have problems. He isn’t trained to maintain the lock mechanisms so assisted where he could but let the other chap and a volunteer get their hands dirty. Traffic was stopped from coming down the next lock, but another boat appeared from below dropping the already low pound some more. 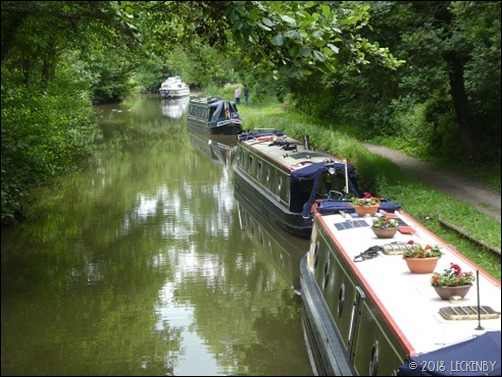 These locks only have one paddle on the bottom gate, so if it goes wrong you can’t empty the lock. Bolts were undone, things jiggled, there was a twist and the teeth were catching. More bolts loosened, things jiggled, but still no joy. This paddle mechanism has been playing up and the Hit Squad had been out to it over the weekend. Some advice was needed. None of the Lockies phones had signal, so various other phones that had a bar of signal were tried. Advice given, more bolts undone, things jiggled, still nothing. For what look like quite simple mechanisms this one wasn’t going to have a simple solution. 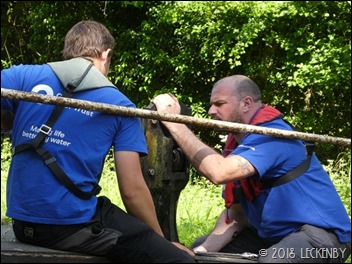 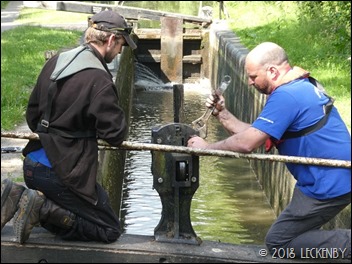 Keith the area supervisor appeared, not able to stay behind his desk at Hatton. So two of them now sat on the gate, undid bolts, jiggled things, adjusted their view point, got extremely greasy hands. Still nothing. More chaps in blue arrived, at least six of them now. Was the Hit Squad going to be needed? Another jiggle and the level in the lock started to slowly drop. More things undone, a knock, another knock, some rope was called for, the level dropped more, it was starting to boil below the lock. Was it the mechanism or the paddle? 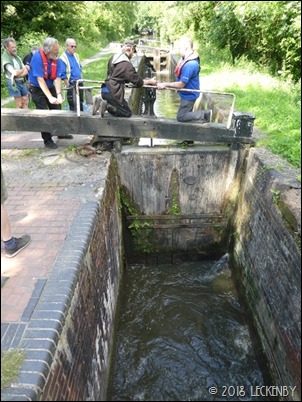 Spare parts were needed. One chap was sent off to Lapworth to get new cheeks and a 479. Once the lock was empty the gate could be swung open and work could carry on on dry land. The whole mechanism was taken to bits, each chap holding onto sections so as nothing could fall into the lock, each one of them getting clarted hands and nobody had brought their hand cleaner with them!  They needed something else. Attempts were made to call the chap who’d gone to Lapworth only for us to find out that his phone did have reception as it was resting on the lock beam. 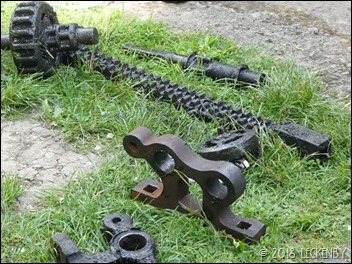 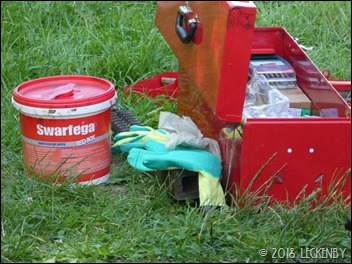 Once all the greasy pieces were laying on the grass it was worked out that a new piece was not marrying with an older one, burrs were forcing things out of alignment and the rack had got bent. The new parts arrived along with a full tool kit and a huge tub of Swarfega wipes. 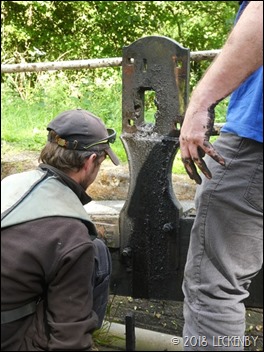 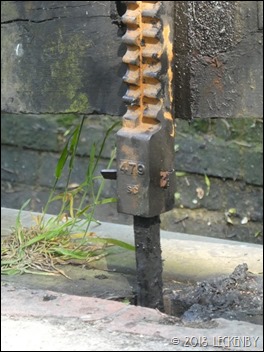 The basic mechanism was put back together, it would need testing now in case the paddle was also at fault. NB Escapology was brought into the lock as it would be daft to fill the chamber without a boat in it. Gate closed with the paddle down, the paddles on the top gate lifted, no boiling below the lock, the paddle was still attached. 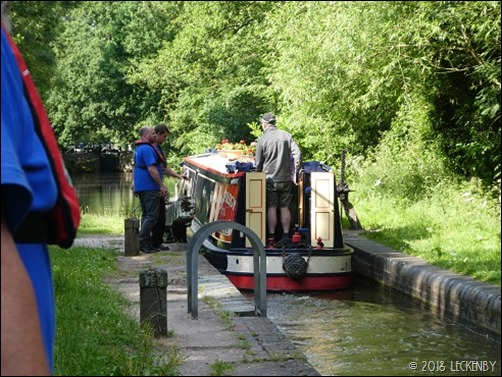 At last NB Escapology was on it’s way, they’d had quite a day of it being stuck due to a gate for a couple of hours and then getting on for four hours at lock 35. 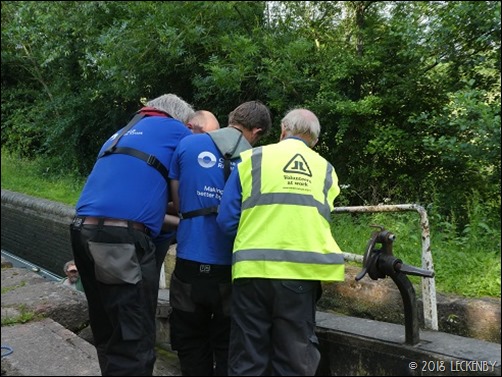 No boat was ready to come down, so the paddle was lifted to empty the lock. This meant one poor chap having to sit on the gate above the water, winding a windlass as everything wasn’t fully attached yet, another chap holding the loose paddle gear out of the way. With the lock empty NB Dolly made her way in, but she had to wait for the paddle gear to be put back together properly, four chaps holding onto pieces getting covered in grease again before everything was back where it should be and the paddle operational as normal again. 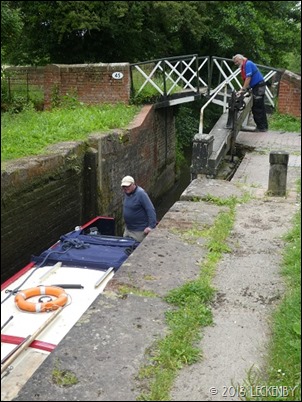 One boat came down and then it was our turn. Even though the level had risen it still took sometime to get Oleanna off the bottom and fully afloat. Once in the lock the gate closed behind us and she was brought up at 5:22pm. With everything now working the chaps headed back to their vans wiping their palms clean with wipes and left the remaining boats to get on with it. Tomorrow they would return and check it, grease everything up to ease it’s use. No need for the Hit Squad, just determination from the team. Many thanks to them all for getting things sorted and getting us moving again. The next time I get grease on my hands whilst crossing over a lock gate I will remember today and understand why it is there. 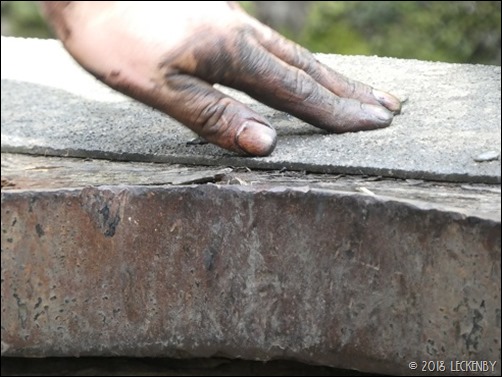 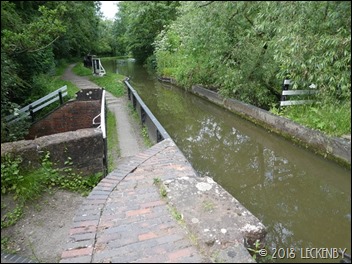 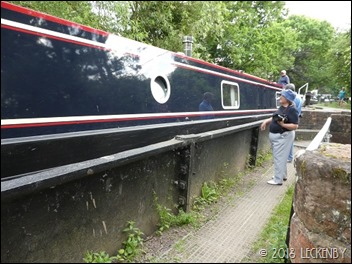 On up the next two locks, passing over Yarningale Aqueduct, all 42ft of it. I quite like this aqueduct, if only they could all be like this one! 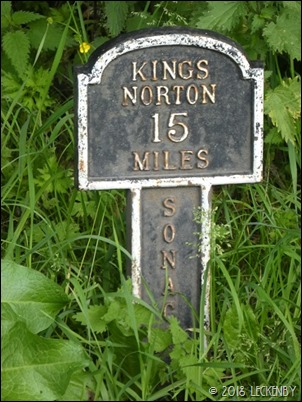 We made our way to the next M on the Waterways Routes map and stopped in a perfect spot for Tilly, another Mrs Tilly stamp of approval. She’d been very patient all day in a wonderful place but only got to look out of the window at it, so she was allowed to stay out much later than normal without the sound of a Fox to worry us.