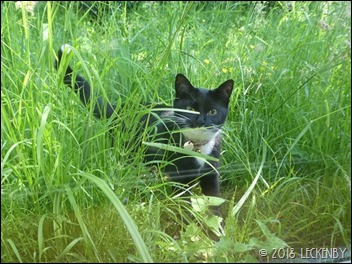 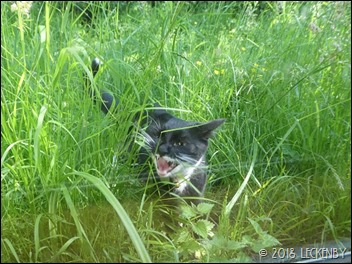 A good morning, several more trees climbed whilst they had their morning dingding. There was no sign of the ginger woofer until I went in for a drink, what a funny noise they make. I couldn’t see it from the table no matter how upright I sat, so only one thing for it a bit of a cat nap. 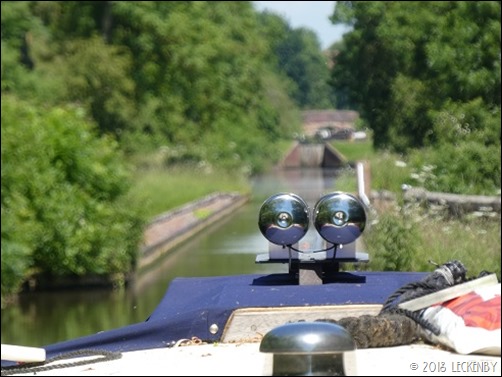 On Tilly’s return we pushed off only wanting to reach Wootton Wawen today so not that far. Around a couple of bends and the long straight to Edstone Aqueduct and Bearley Lock came into view. As you approach the aqueduct it doesn’t look very long, but as you get onto it it seems to stretch out ahead. At 28ft high and 475ft long it isn’t a patch on Chirk or The Pontywhatsit, yet it is still an aqueduct. I will never like them. 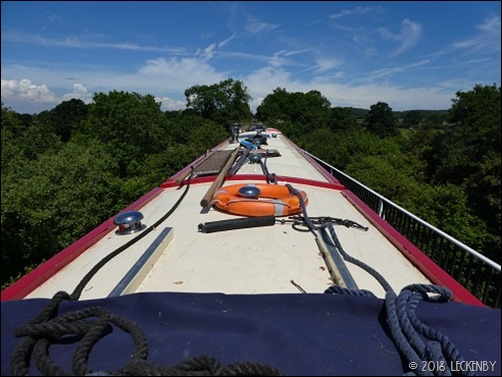 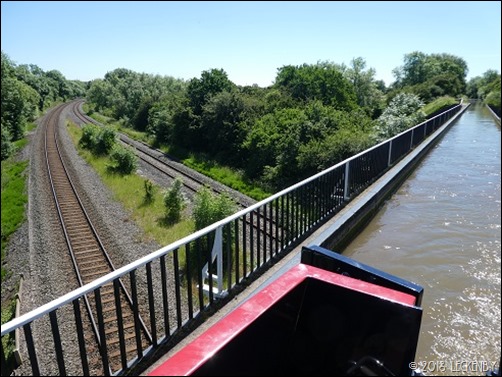 We soared over the road with traffic passing under us and then over the railway line, Mick hoped for a train but none obliged. The towpath on the aqueducts on the Stratford sit alongside the trough of water, the walkway being lower than normal.

In the distance we could see a boat coming down the lock, plain sailing all the way and up our only lock for the day. 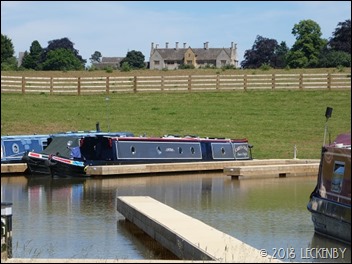 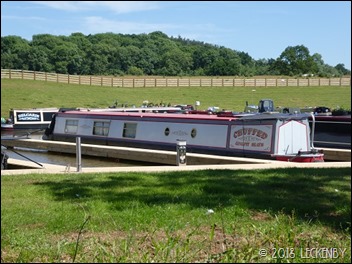 At Hill Farm Marina, all pristine and new, there were quite a few boats moored. On the far side we spotted the Finesse Crick show boat NB Caress of Steel and then on the near side NB Chuffed both all tucked up awaiting their next journey out. We carried on passing two geese and a white duck family happily swimming along.

At Wooton Wawen we were off new water. Our last ever hire boat came from here, we’d sold our share in NB Winding Down and were waiting to be boat owners and desperately needed a fix after I’d opened two Christmas shows in Hull. I had rung the Anglo Welsh Office and managed to get us an extra night for free on a boat with a stove, we also didn’t have to pay for the diesel or a bag of coal that someone had to go and buy for us. It was the only boat going out between December and March. 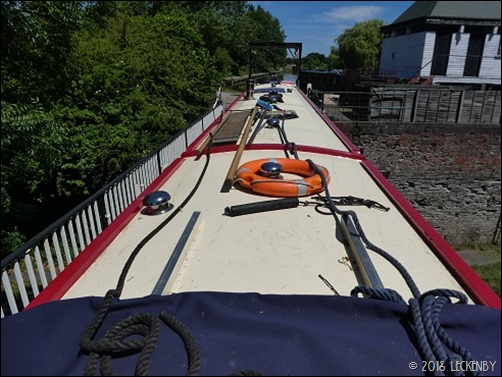 A second Aqueduct brings you over the A3400 and to the Wootton Wawen hire base. When we dropped off the hire boat they had us leave it on the aqueduct, blocking the navigation, but then we’d hardly seen any boats moving, the canal southwards had winter stoppages. Today we were relieved that the way ahead was free and indeed there was enough space to breast up against one of the boats for us to fill with diesel. 80.8p a litre and we hadn’t filled up since Hanbury about three weeks ago, needs must. Once full we pulled over onto the 24hr moorings and positioned ourselves part in the shade but leaving the solar panel in the bright sunshine, the day had turned quite hot. 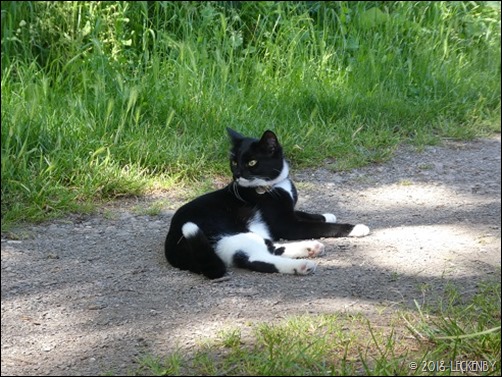 We were soon joined by another couple of boats, one being NB Escapology whom we’ve seen several times of late. Everyone sheltered inside their boats whilst Tilly made the most of a second outside. Actually it was the second and a bit outside. They had done that thing of letting me out and then moving the outside with me in it. However I did witness them doing it so didn’t jump onto the next boat to come along! No ginger woofers here just Crows who wanted to tell the world where I was, no good for finding friends. 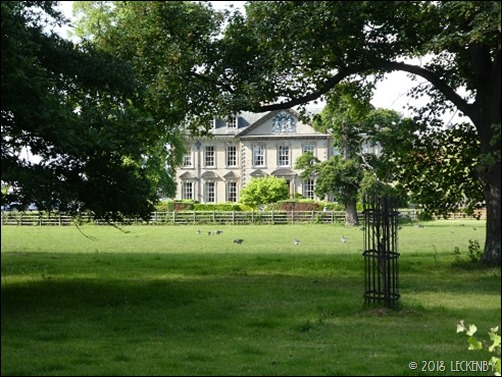 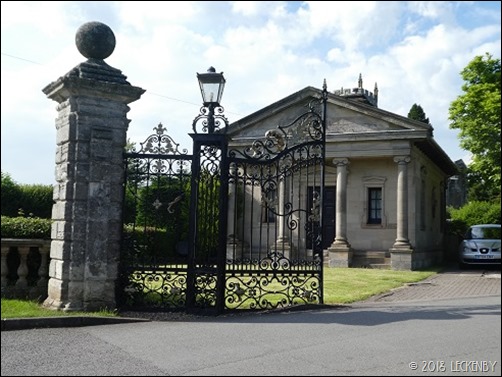 Tilly manages to remember to come home to go to the toilet, but rarely does she remember to have a drink on hot days. So as the afternoon cooled off and she came home for a pee (I know, what’s wrong with outside?!) we locked her indoors so we could have an explore and she could have a drink. We walked down past the Farm Shop, we’ll have a look tomorrow, and carried on towards the village. The busy A3400 zooms over an ornate bridge that crosses the River Alne in front of Wooton Hall, a smart house surrounded by static caravans. The gates are rather fancy along with the gate house. 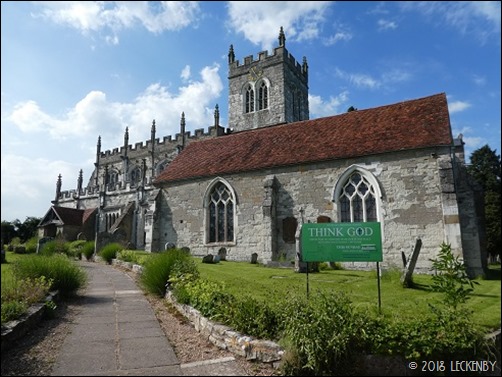 Just past these is the entrance to St Peters Church, or the Saxon Sanctuary. This is a strange looking church from the outside, even stranger on the inside! It feels as if four churches of differing dates have been grafted together. The base of the tower dates back to the 900s, Saxon, and is one of the oldest structures in the Midlands. The top of the tower 15th Century as is the choir screen. 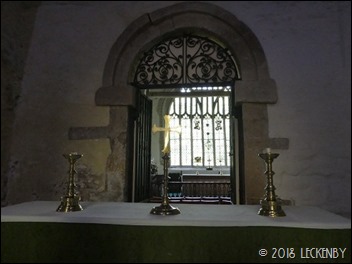 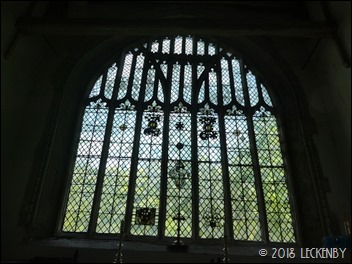 As you walk in you quickly notice that there seem to be a lot of alters. The nave and the raised choir face a Saxon arch at the base of the tower, behind here is the first alter. Followed by another arch which leads you through to seats and a second alter, behind which is a large window that seems to prefer being on a slight diagonal to everything else. Then off to the side is the Lady Chapel with it’s barn roof. Here there is an exhibit giving the history of the the church and village right up to August 1997 when lightening struck the church at midday the day that Princess Diana died. 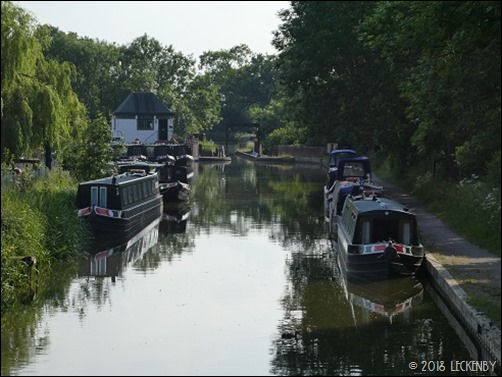 We called into the village store for some milk where I was astounded at it’s Tradis like feel, it goes on and on and there is so much stock it might be worth checking the sell by dates on things before you buy anything. Having said that there was a constant stream of punters and they are guaranteed to have your favourite curry paste.