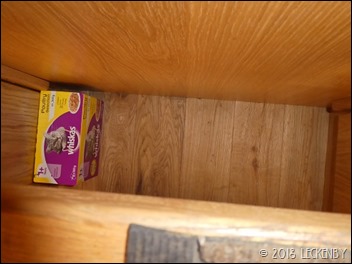 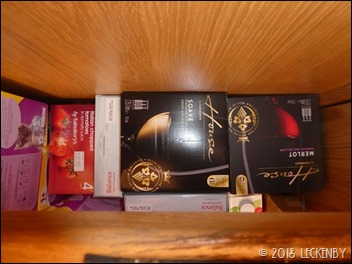 The wine cellar had a good sweep out and all that was left in there was one box of Tilly’s food. This soon changed when our order arrived! The driver was really excited to see that he was delivering to a boat, he spends quite a bit of time drinking at The Cape Of Good Hope in Warwick watching the boats. Once everything was stowed away, things repacked for the freezer we were ready for the off late morning. Quite a few boats had come up from the basin but then one came down from the locks. Best to take advantage of the lower locks being in our favour and not have a look around the craft market before we left. This proved to be a good thing, as all the locks were in our favour. 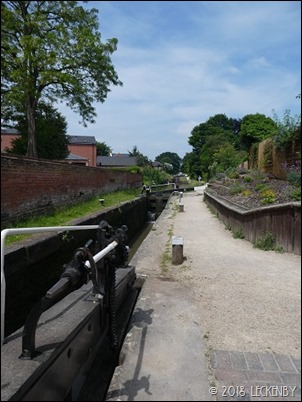 After being on the river for so long our watery world has shrunk somewhat, narrow locks and very narrow bridge holes for us to squeeze through. The Stratford Canal has many locks, 55 to get up to the Birmingham level and today we planned on ticking quite a few off. The bottom gates at this end of the canal are all single, so big and heavy, we’ve had several people warn us about them, nobody mentioned that none of them want to stay closed! 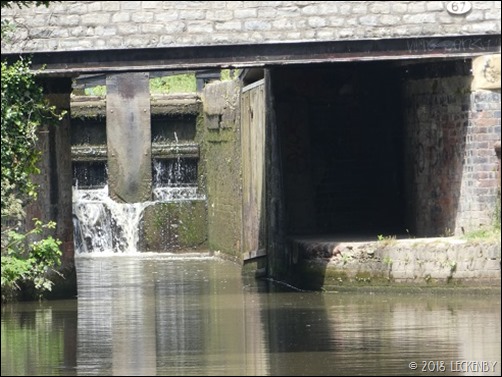 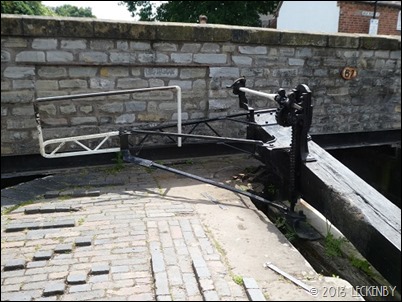 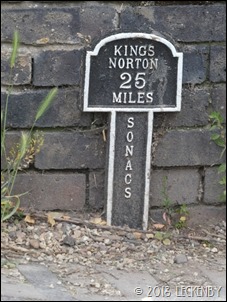 We worked up the first two locks, a group of gongoozlers following us. Up ahead I could see the open bottom gate of Maidenhead Lock 53, this was open for a reason, it is a B**t**d. When the canal became disused a new road bridge was built over the bottom of the lock. Not enough room was left for the lock beam, so a right angled one was added. Obviously the boat coming downhill hadn’t manage to shut it after them, or maybe hadn’t even bothered. Normally these cranked beams are made out of wood and you can usually just manage to get behind them to push off from a wall to get them going. This one however is made from a steel framework, getting it going wasn’t too much of a problem, it was getting it past the point of no return that was! I was determined that this lock would not beat me and was about to alter my tactics when one of the gongoozlers decided to join in. I think he thought his help would make it really easy, it certainly meant it got closed, but it still took time. 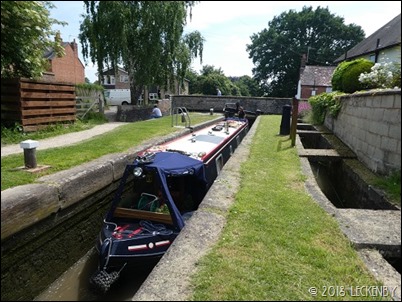 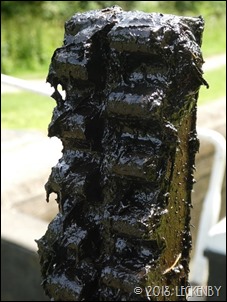 We hoped to fill with diesel at the Excellence Afloat base and as we approached another boat coming towards us looked like they had a similar idea, although at the last moment they seemed to change their mind. The base was closed and when they’d come through Wootton Wawen the pump there was broken. Hopefully it will be mended by the time we get there! 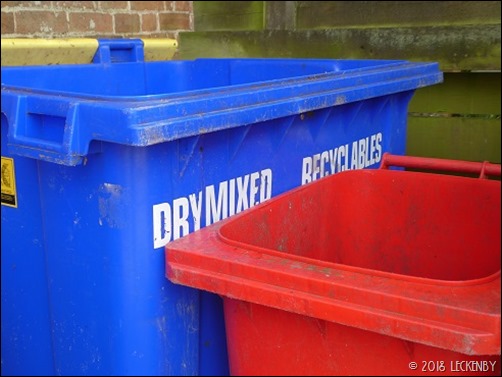 After Bishopton Lock we pulled in at the water point and checked out the rubbish bins. Now back in C&RT land we could dispose of all our rubbish responsibly, we’ve so missed recycling, our stern lockers had bags of glass and boxes of cardboard. The equivalent weight we’d gained this morning in shopping was possibly disposed of in the bins. We had a quick pit stop before starting the next batch of locks. 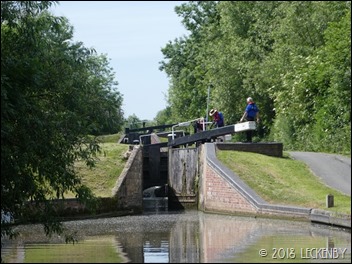 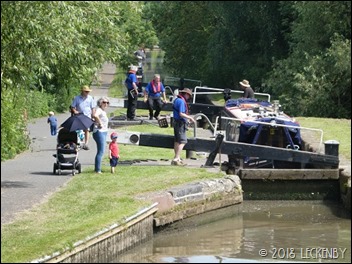 At the second of locks two volunteers were opening and closing the bottom gate, another chap appeared to be trying to clear something from behind the gate using a large box with holes on a very long pole. They waved us up and halted what they were doing, one chap saying I should go ahead and empty the lock above, oh and the top gate would be open. The gate was open and wanted to stay that way no matter how many times I tried to close it. The lock didn’t look anywhere near as full as it had been earlier in the day, the water mark a good 18 inches higher than the level, this meant the pound above was also down. I emptied out what water there was and brought Oleanna up watching bubbles rise from the bottom of the pound above, not a good sign. 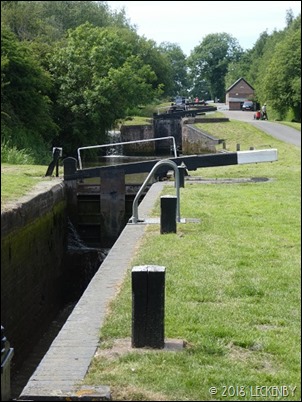 Mick and Oleanna made slow progress towards the next batch of five locks whilst I walked ahead. The bottom lock was in our favour and I opened the gate and waited for them to crawl along the bottom of the pound towards me. In came the bow, about ten foot in and she slowed to a halt. Mick reversed her, then tried again with a bit more umph, another few feet. The bywash alongside had nothing flowing over it, the one into the pound above suggested someone was coming down the flight as it was more than overflowing. We tried flushing water into the lock to see if this would lift her enough to get over the cill, but no.

Now with a centre line up top for me to pull on, Mick brought Oleanna in gently (the more speed you have the lower the stern goes), we managed a few more feet before she was grounded again. With Mick pulling and no-one stood on the stern we got a few more inches in, but the stern was still way out of the lock. By now the boat coming down was only one lock away, so we reversed out and tied to a bollard, hoping that a lock full of water would make all the difference.

The boat coming down was a hire boat who worried that they wouldn’t get out of the lock, but we reassured them that it would be fine, they were bringing water with them and were likely to be far lighter than us. The gate paddle was whipped up and they started to descend. Within a minute Oleanna was struggling to stay at the side, bow right over and on such a list. I whipped the paddle down and Mick ran down to rescue her. This is the second time Oleanna has had to cling on with just the centre line, we are astounded and grateful at how strong the soft shackle is that joins them to the roof. 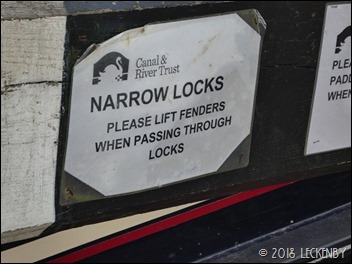 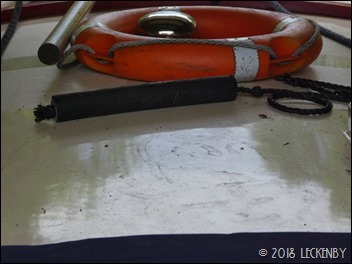 With the hire boat down and Tilly reassured at the bathroom window, Mick put Oleanna into gear only to find she now had something around her prop! Engine off, down the weed hatch, well what a surprise a pipe fender!!!! Just how many of these rubber fenders line the bottom of canals at lock flights because people want to protect their paintwork! On an afternoon like this you are guaranteed to pick one up on your prop. 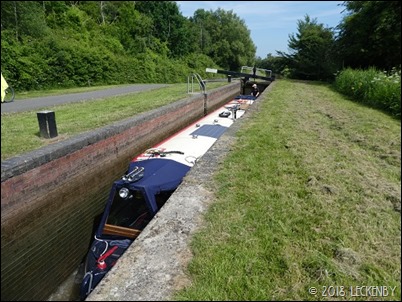 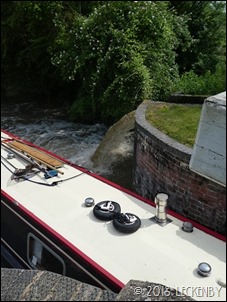 I took a centre line and Mick brought Oleanna back towards the lock slowly. She slowed, but with me pulling she made it over the cill. Maybe one locks worth of water had made the difference, maybe it had washed away some silt, what ever the reason it meant we could carry on up the flight. Going into the next lock and the bywash here was a torrent, another boat was heading down. A Lockie walked up past us and asked if we’d had some trouble, it was only going to get worse as they’d had to drain a pound lower down that would now need refilling. He walked up ahead to stop any further traffic from coming down, but we were allowed to continue upwards. 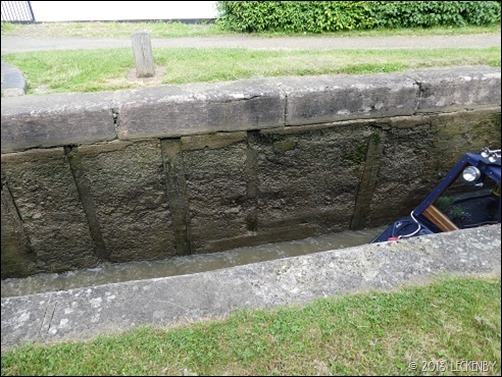 They said we’d be okay in the longer pound before the last three locks of the flight, but knowing how low the pound we’d got stuck in was I wanted us to be in a far longer stretch of water before we stopped for the night. At the top of the five locks two C&RT chaps were mending a ground paddle and a small queue  of boats was forming to go down. By the time we had cleared the next three locks I could just see that the front boat was starting to make it’s way down the flight, so hopefully no one was stuck for the night. 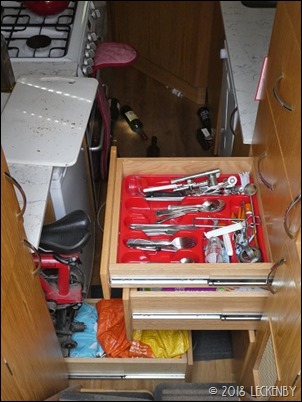 Time to see if there was any damage inside. I was expecting open drawers, but the list to starboard had brought open a drawer that has never opened before on the port side. Any bottles that were on the booze shelf, mainly whiskey were all across the floor, luckily intact. Our bottle of Rapeseed oil had been stopped from plummeting to it’s death by the bread board. I was very glad as that would have been a very sticky mess to have cleared up, but it would have saved me the job of oiling the oak floor. 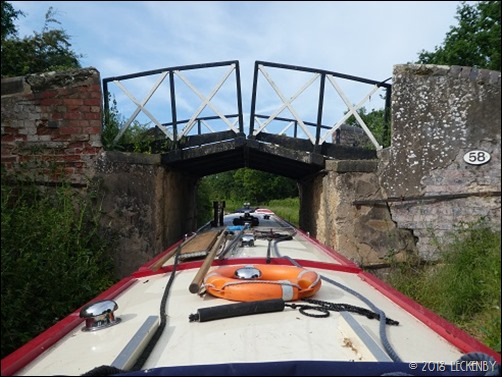 Now much later than planned we kept our eyes peeled for a good spot for a barbecue. The first visitor mooring we came across was narrow and most of the bank was fighting to stay upright, so we carried on. A wider stretch with armco, trees, sideways trees and friendly cover. With a little bit of thistle chopping we’d have a very good mooring for all of us. We pulled in, showered and lit the barbecue. 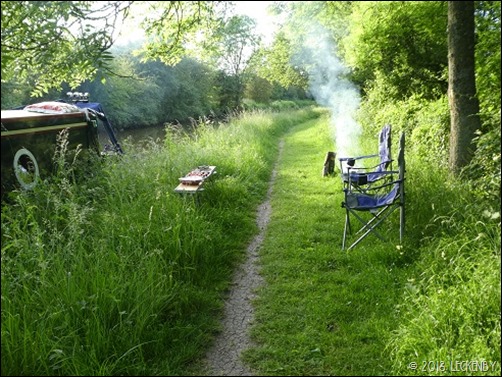 I wasted little time and was straight up the first tree, proper outside at last! With my new outside claimed and marked out I could plunge in and out of the friendly cover and keep an eye on what they were doing. I stayed out for ages, only to be picked up when some noisy ginger woofer started to shout. I was going to give it what for but instead was taken inside, I was a bit peckish anyway. 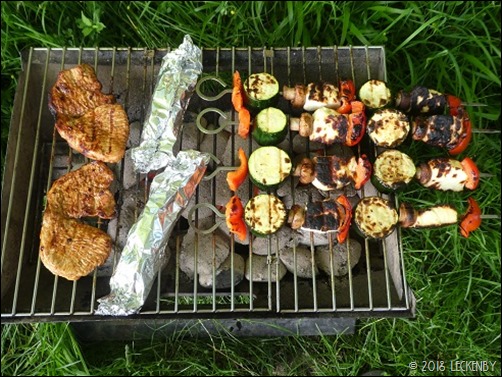 2 thoughts on “When The Bottom Is Almost At The Top! 10th June”