A slow start for us this morning with no sudden movements for me. The two hire boats that had pulled up behind us last night headed up towards Stratford and a couple of boats headed down stream, including NB Jolly Lamb whom we’d last seen in Kidderminster many moons ago.

We ran the washing machine and then topped up with water, it’s a nice feeling when the dirty linen drawer is empty, just a shame it doesn’t last long! Mick also saw to the yellow water tank as we were near an elsan. Extra layers were called for as we pushed off, jumpers and fleeces, there was quite a chill in the air. 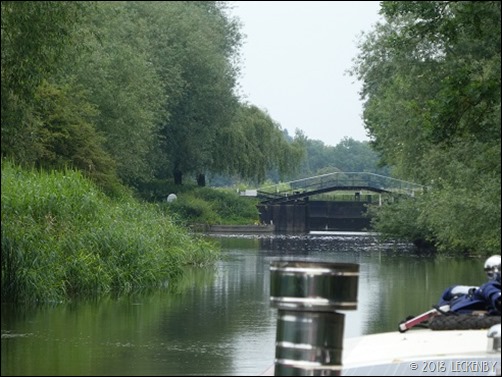 As we approached Weir Brake Lock, Mick spotted the Countess of Evesham, a restaurant boat, up on the next reach heading towards the lock. In our favour we worked our way up, but the Countess didn’t show. Last night she had come all the way down to Luddington, reversing past us and tying up on the lock landing for the passengers to stretch their legs for fifteen minutes before returning to Stratford. The evening cruises are longer than the lunchtime ones, so they must have winded up stream of the lock. 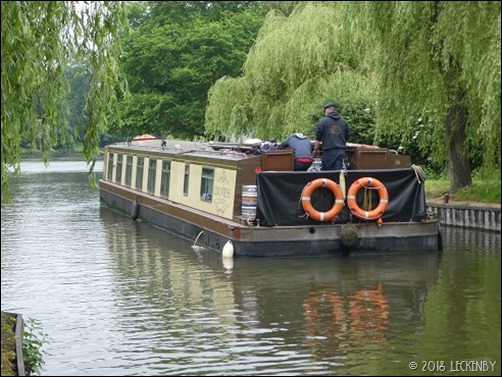 The river now wider than yesterday started to have the look of a city with park land and tarmacked pathways. At Stratford Trinity Lock the Countess was on her way back up. 41 for lunch today, all quaffing wine from big glasses and waving at us. Before leaving the lock they radioed to a trip boat that had just come past, now winding above the weir. There was time for them to clear the lock before they were overtaken. 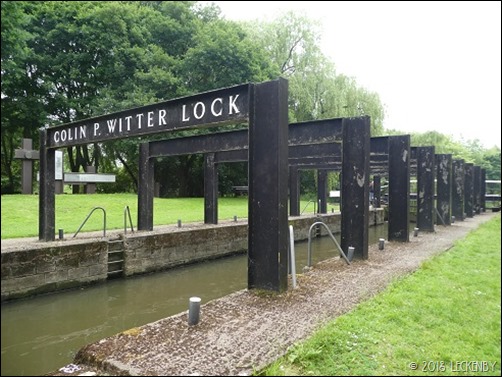 We emptied the lock and brought Oleanna up to the Stratford level. A lady watched on from a bench, taking the occasional photo. She got talking to Mick as the lock levelled out. A German lady who wanted to know what sort of notice a boat had to give to use the lock. It took a little while before she understood that the boat was ours and the lock was self operated and that we weren’t here just to operate the lock for passing boats. 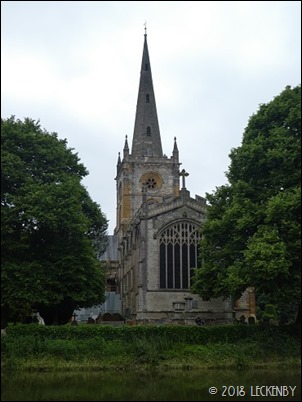 We pootled our way in passing Holy Trinity Church , where a certain Mr Shakespeare is buried. 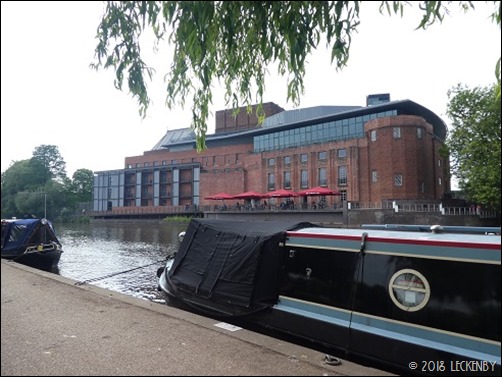 Along the park bank there is plenty of space for mooring. We spotted a space behind NB Wanderer but carried on hoping for a space opposite the RSC. There was space, but we’d have had to use pins near the waterpoint. Where there were rings, boats had nicely spaced themselves out, no-one having to share rings. Two boats could have nudged up to make space for us, but by this time we’d decided that it would be nicer nearer the chain ferry a bit less footfall. So we winded headed back down stream to wind again between the trip boats and the chain ferry and pulled up. The space was long enough for us, but on a bend. We opted for stern end out.

The ladies from NB Wanderer came out for a chat. Yesterday when they’d reached Luddington, which was in their favour there was a boat waiting to come down just as we’d thought. This was the same hire boat we’d encountered, their first time and obviously they hadn’t quite slowed down yet! The ladies were hardly in the lock when the gate was being closed behind them and the wrong side paddle being raised swiftly. 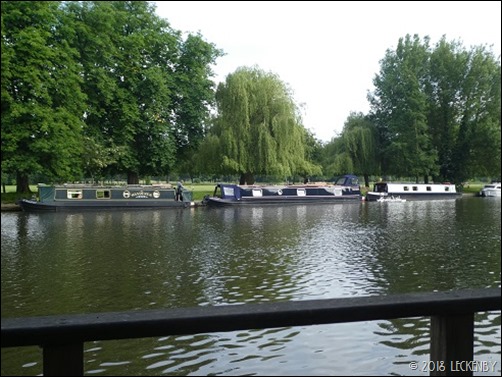 Mooring here was going to be more suitable for Tilly, but it turned out she didn’t like it. Too many people, woofers and some very noisy swoopy crows who wouldn’t shut up! The number of those hissing swans coming up to the hatch, how rude are they, demanding bread. They all needed a good swipe from my paw! The back doors were soon closed and all wild life whether furry or feathered were under control again. 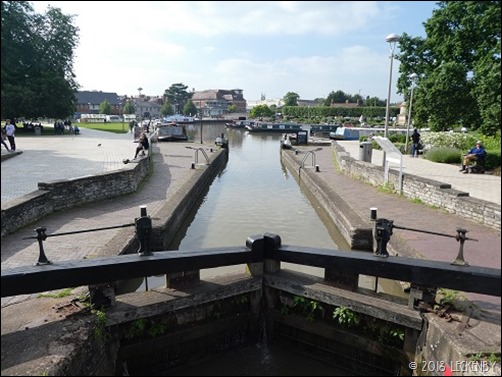 Up in the canal basin is a welcome boat for the Avon Navigation Trust, here you can get information, buy licences and pay for overnight mooring on the river. Because we’d had red boards on the river the lady said we’d be alright for an extra night, so we paid for 48hours mooring. We’ve enjoyed the river so didn’t mind donating £10 more to the trusts funds. A walk round town to pick up a bit of food for today and have a quick nosy. 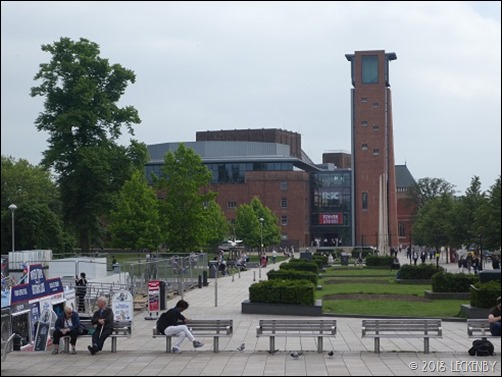 Just how many tourists? Yes we were adding to the numbers. It’s a good job there is so much land around the RSC as it was packed, mostly with French students. I’m glad we’re a little bit out of the way where we are moored. 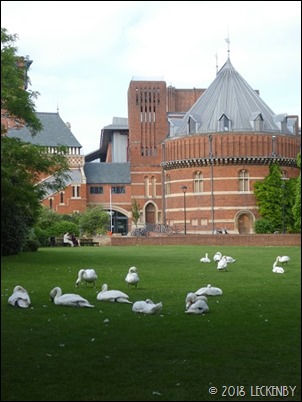 Our walk brought us back to the river to the chain ferry. Unfortunately we weren’t able to pay our 50p to cross as the chap had gone home. So we sat and chatted to two sisters who were making the most of the last five minutes of their paid for parking, watching the river go by. We now had to walk round as we were not been able to attract the attention of anyone on the moored boats to come and get us.

2 thoughts on “Slowly Does Everything. 5th June”