Mick headed back to Bidford Boat Services by bike this morning in the hope that they might have a fuse. Last night we’d received an email from Amazon saying that the fuses that had been ordered had been dispatched to Pershore, five days after they’d been ordered and two days after Mick had tried to cancel them, they were too far through processing for this to happen! At the boat yard he got chatting to Mike an engineer, he rummaged through things and pulled out a suitable fuse that he’d had for years. Mick said that they could have chatted about boat electrics for ages but he managed to pull himself away, stopping off at Budgens for some broccoli and bread on his way home.

By the time we were ready to set off several boats had already passed us heading upstream, we were about half an hour behind the last one by the time Tilly had come home and the new fuse had been installed, so maybe we’d catch them up or maybe not. 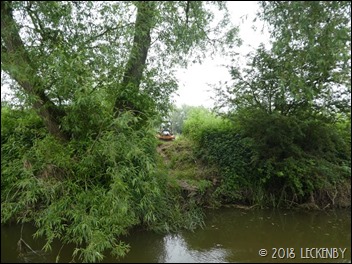 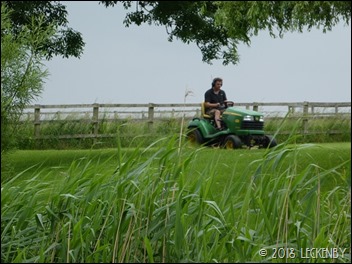 The River Avon certainly attracts good lawn mowers, the other day the robotic ones and today big sit on ones. One chap was busy cutting the towpath and the routes down to the fishing pegs on the banks. He’d pop out through banks of high nettles, stop just in the nick of time and then spin round on the spot to return to the main path. It looked like great fun. Another chap further along was mowing a large garden on a bigger sit on mower, this didn’t look quite so much fun as he had to reverse round trees, not just swing himself round. 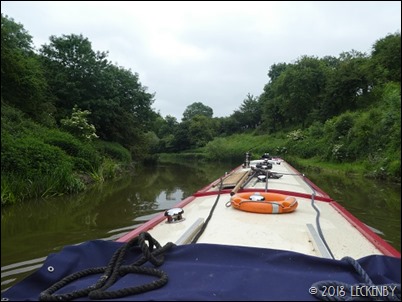 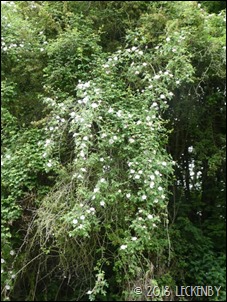 Bidford Grange Lock at only 2ft 6” was easy to empty and a smooth ride upwards. The river from here on much narrower than further downstream, the banks higher and steeper. Our speed dropped, the river may have been shallower, the flow of the water faster against us heading upstream, but Oleanna was having to work hard. The Rapeseed flowers are past their best now and the Elderflower has taken over, every now and again you get a big waft of the sweet scent. I really must stock up on sugar and lemons to make some cordial before the flower heads are past their best. Dog roses hang over banks of trees adding pink to the mass of green.

On reaching Welford Lock (Cadbury Lock) the boat ahead of us was just finishing going up. We helped the ladies of NB Wanderer with the gates and chatted. They had only bought a weeks licence in Tewkesbury but have enjoyed the river so much they are going to get another and head back south instead of carrying on up onto the Stratford Canal. In no rush they said they’d wait for us at the next lock. 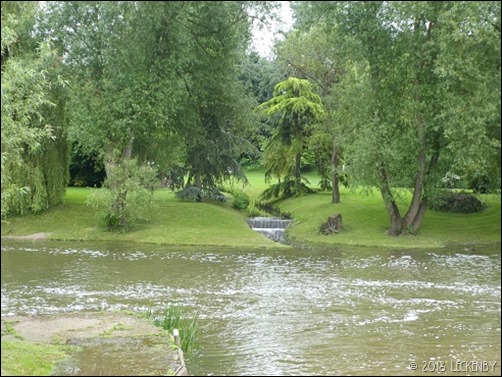 As we re-set the chamber I watched a chap walking round his immaculate garden on the opposite bank, he was wafting away imperfections with a leaf blower. A gentle stream tumbled down a small waterfall into the river, very lovely, they certainly know how to do gardens round here. 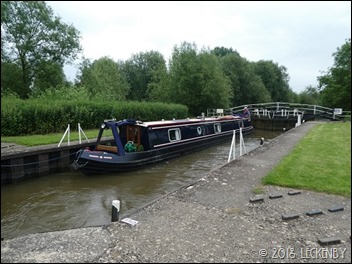 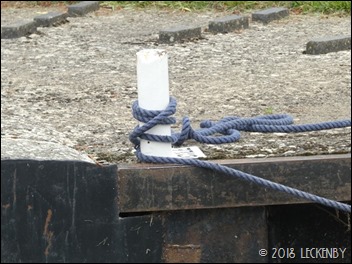 Welford Lock was noted in our guides as being very turbulent when filled and we should tie up very well. It being over 7ft deep and the bollards not quite in the right places made this a touch difficult. But with Mick holding onto the stern line and four turns around a bollard at the bow I started to open up the paddles. These create a plume of water over the surface and opening the one on the same side as Oleanna seemed to keep her into the side. Mick kept putting her into reverse which helped hold the bow in. My four turns held well (a tip from the hire boats at Sewerby Bridge), no slipping as you sometimes get if you put a loop over the bollard, you can also easily untie your rope when there is a lot of tension on it without any risk of loops and fingers! 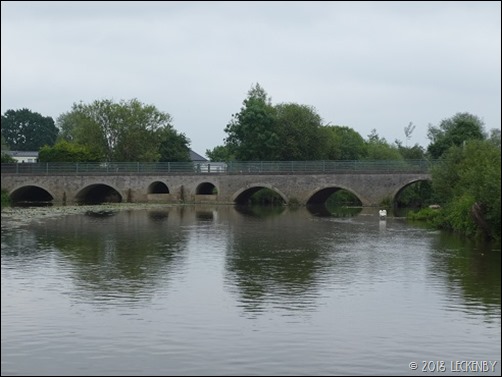 A mile upstream was Binton Bridge, another with multiple arches none identical in either height or width. They may be good at gardens but have cobbled their bridges together somewhat,

, although it makes them quite interesting. 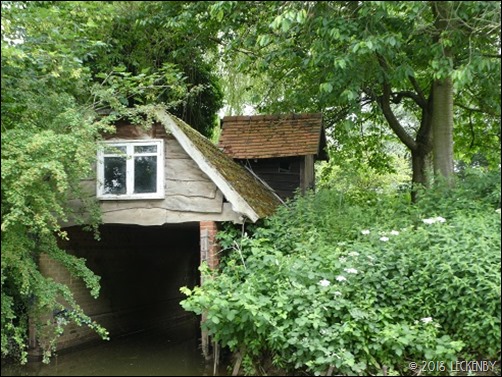 Along this next reach of the river I got the tell tale signs of a migraine starting, thanks body! The blank spot in my vision, followed by numb hands etc, I quickly took some pink pills hoping that they would reduce the effects. By the time we reached Luddington Lock I could feel all my fingers again and it was the lull before the head ache kicked in, I just hoped I wouldn’t have to chat to anyone too much. 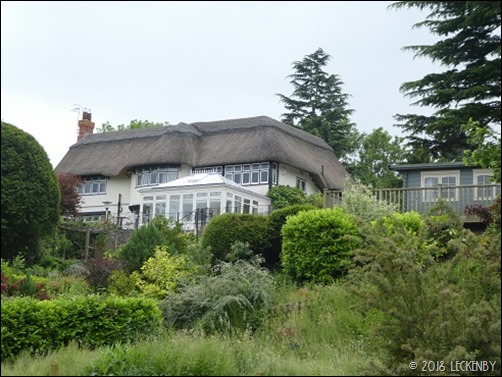 The ladies on NB Wanderer had obviously had to go up before we arrived as a boat was just about to come down. The force from the weir meant we had to push through to the landing stage. I managed to hop off as quickly as possible, closely followed by Mick with the centre line. Up at the lock a lady lifted the paddles straight up, not waiting to check to see if we’d tied up. Mick struggled with the flow of the water gushing from the gates only having managed to get one turn around a post. Oleannas bow was being pushed right over and Mick was clinging on for dear life, our Alde boiler flue getting perilously close to being broken on the landing stage. By the time I got up to the lock it was too late to slow the whole thing down and Mick was just managing to pull Oleanna in. The lady said hello, totally unaware of what had just happened below the lock. I decided to keep my mouth shut as all that would have come out would have been expletives not totally deserved and partially caused by my growing headache. We suspect that most experienced boaters would have noted us arriving below and waited for us to tie up before opening up the paddles full whack, but this was one of the posh hire boats from Anglo Welsh. It could have been their first time out or twenty fifth, who knew, from what I remember basic lock training doesn’t include checking on other peoples boats you may effect. 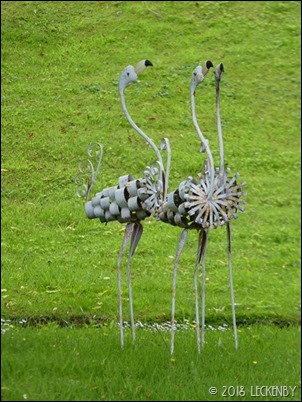 Once up we pulled over onto the moorings. Here a couple of water taps were positioned so that we could be right at the end and still fill with water. A quick check of the area and it was deemed fine for Tilly. We had a quiet afternoon whilst Tilly was extremely busy somewhere out of sight, possibly running around like a loon whilst trying to find holes in the very nice big lawn behind the fence alongside the moorings.