There was a very important conversation going on in the park last night, the lady was still chatting away until at least 3am (I know this because the bell tower keeps very good time!), but by 3.30am she’d run out of air and gone home to find some more. The geese were awake good and early doing their best to summon some white sliced for breakfast. By 8am some of the locals obliged and got swamped with expectant beaks. 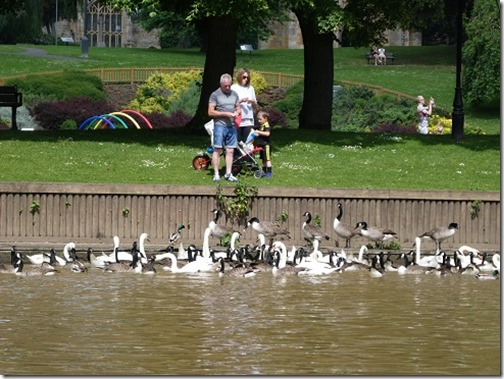 We considered trying to find something for a barbeque but we’d not spotted many fresh food shops yesterday. So we decided to wait to see what Bidford on Avon might have to offer on a Sunday afternoon.

Boats had been coming past as we had breakfast, several now familiar, maybe local and out to make the most of the sunny weekend. We joined in and pushed off passing under Workman Bridge before turning to the left towards the lock. Evesham lock marks where the Upper and Lower Avon traditionally met, now all cared for by the Avon Navigation Trust, but this wasn’t always so.

Improvements to the river began in 1635 with a series of locks and weirs making it possible to reach Stratford from the River Severn, and to within 4 miles of Warwick. The Upper Avon was prone to flooding and was abandoned as a means of navigation by 1877. The Lower Avon struggled on only really navigable upto Pershore by 1945. Restoration of the lower reaches began in 1950 and were completed in 1962. The upper river was a far more daunting task as most of the locks and weirs had disappeared. Work began in 1965 on the construction of nine new locks and 17 miles of river using mainly volunteer labour, this was completed in 1974 to be opened by the Queen Mother. The Upper Avon locks now seem to have two names, original names and those of sponsors who funded the works. 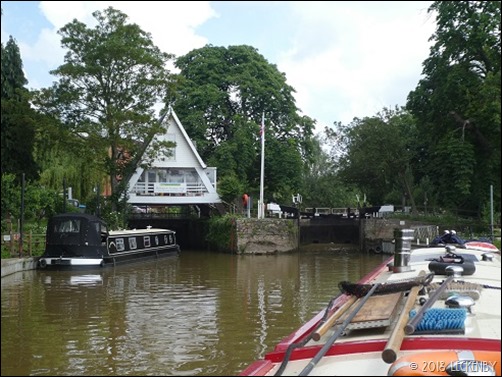 Next to the lock at Evesham stands a triangular building, a lock keepers house. This was once manned, but no longer. The lock was waiting for us, I hopped off, closed the gates behind Oleanna, passed the ropes round the bollards and was just doing the very first click of the top gate paddle when the bow of a boat came round the bend below the lock. They were just in time to share, so I gave them a wave and opened up a bottom gate to let them in. Immediately there were comments as to our colour schemes, NB Keyston asked if Oleanna was an Aintree boat. Both boats with dark blue cabin sides, cream roofs and red grabrails sat next to each other in the lock, the blues a different shade, one hand painted the other sprayed, one far cleaner than the other (I wonder which was which?!). 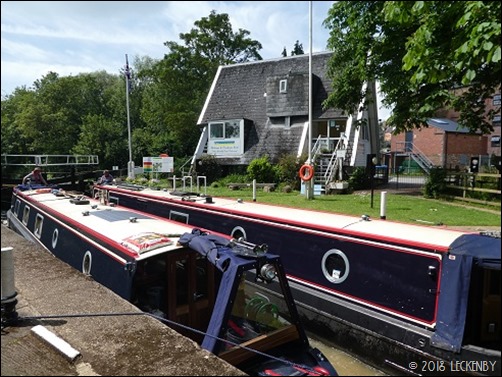 Normally on broad canals it is much easier sharing locks, no ropes are required and paddles can be opened without too much bumping going on. But we followed the guide lines, both boats roped up and the gate paddles carefully opened up together. Oleanna behaved better than NB Keyston, maybe we wound the paddles up a bit too quickly and should have taken it steadier. We both commented on how it had been a smother ride with just one boat in the lock, but one advantage was not having to walk round to open both gates before leaving. 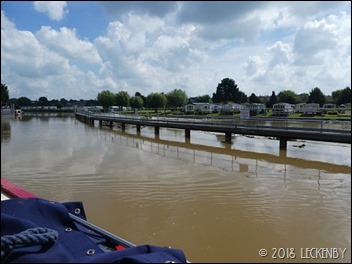 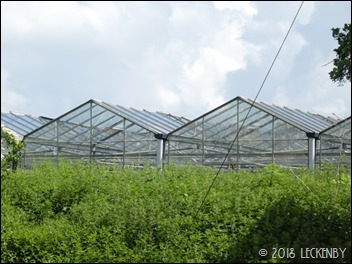 We led the way for the next three miles. When the river rose last week this was the second section to close up to Offenham Lock, it wouldn’t have been nice trying to get past the big weir here with an increased flow of water. As we got near to a sharp right hand bend we of course started to meet boats coming towards us. But after counting pairs go past I realised that we’d be fine as there would have to be another lock fill and empty before any more boats came round the bend. Now in the heart of the Vale of Evesham green houses come right up to the river, filled with growing fruit and veg. 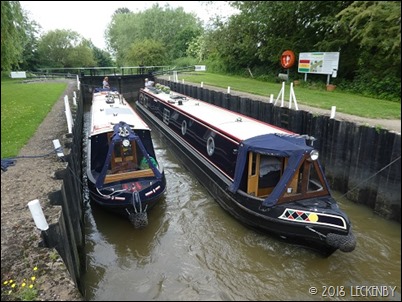 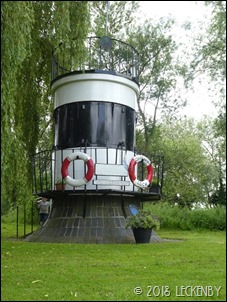 Offenham Lock was waiting for us, gates open and a family stood waiting to watch by the small lighthouse. Once both boats were in I enlisted the help of a young girl who was ever so keen to help with the gates, she asked if she could help at the other end too whilst her family waited by their car for us to finish. At only 2ft 10 deep the lock didn’t take much time to fill, just as well as only one gate paddle was working. 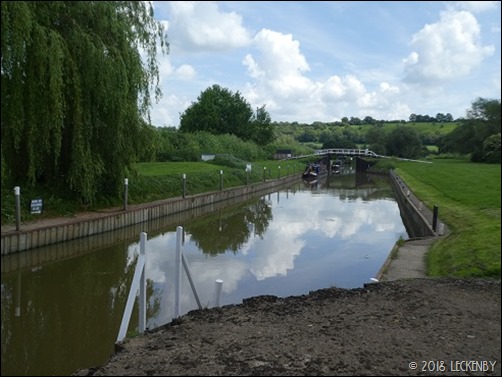 Here we parted ways with NB Keyston, they were stopping for lunch having been on the go longer than us. The moorings here looked nice, a good place to sit and wait for the river to go down, the lock cut having most facilities and sheltered from the weir. The only downside being that a pub across the other side of the river (less than 300ft away) is inaccessible from the moorings, heading south to find a crossing would give you a one way trip of around 9 miles for a pint. 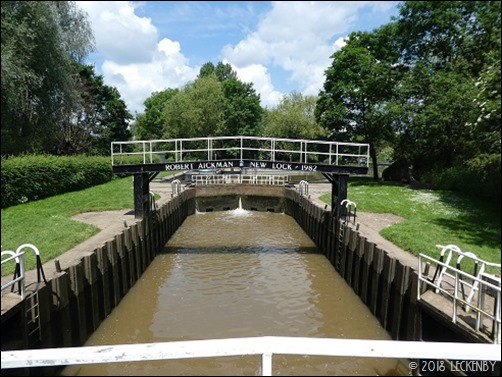 Now on our own again we made our way up Robert Aickman (Harvington) Lock, diagonally across the top of the weir and carried on surrounded by countryside. All the reeds were filled with electric blue damselflies, flitting about in the sunshine. 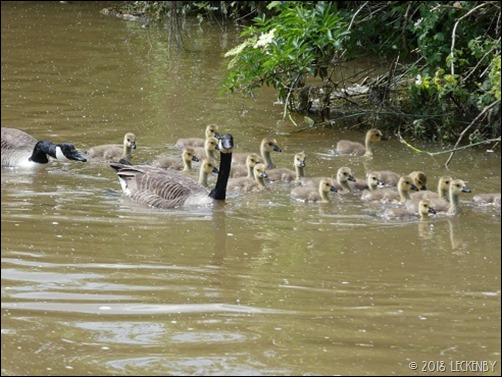 Swans were showing off their fluffy cygnets and we saw our first big goose creche of the year, there must have been at least six lots of chicks all being guarded by their nannies, heads low to the water seeing us off. Several damselflies stopped and rested a while attracted by our grabrail, another mass suicide of flies still covering it. 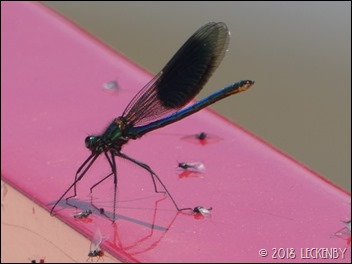 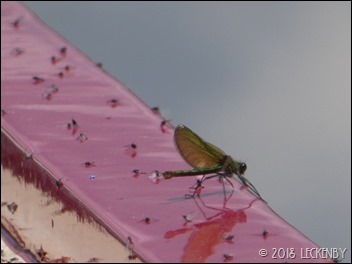 At Marcliff Lock a boat was just pulling out above and a cyclist sat in the shade having a breather from the rays of the sun. This was to be the last of our locks for the day and the thought of some shade ourselves and some lunch was attractive. Moored boats meant we’d reached Bidford. There are quite a few moorings here, plenty outside pubs and then a stretch along the recreation ground. It was chocka! Boats breasted up, the park filled with cars and camper vans all having bbqs. There was one boat that we could have breasted up to, but they had two large woofers and then there was space outside one of the pubs, but our guide warned that it was shallow here. Only one thing for it, carry on. 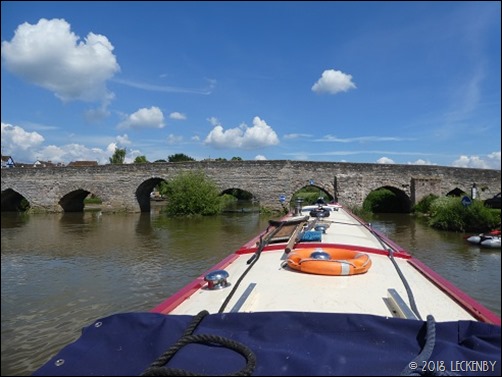 Under the bridge and another three quarters of a mile to Barton (Elsie and Hiram Billington) Lock. Above here there were moorings on both side of the lock cut and only one boat moored up. We chose the land side for Tilly. A steep bank overgrown next to the mooring levels out above with a mown plateau before thick lush friendly cover reaches for what must be miles for a cat. 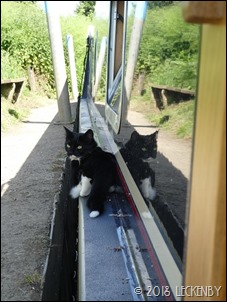 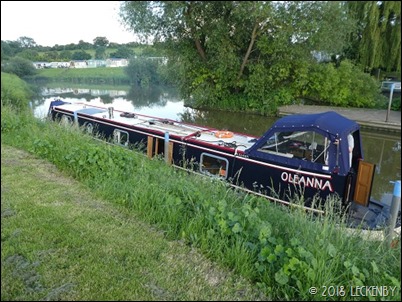 The day was really rather hot and our options for tea were few, mostly involving the cooker being on for sometime. Running through the contents of our depleted freezer I realised we’d just be able to manage a barbeque. Turkey steaks and sausages were left out to defrost in the afternoon warmth whilst Tilly explored her new kingdom, we stayed indoors sheltering from the sun. 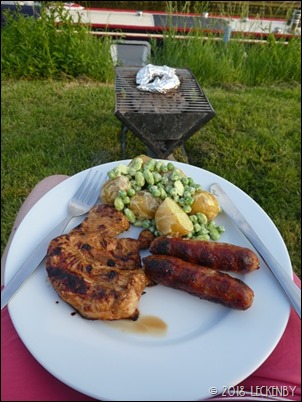 By 7pm everything was fully defrosted, a sweet and sour marinade made for the steaks, some potatoes steamed with some peas and edamame beans all cooled and coated in garlic mayonnaise, followed by bananas with chocolate. Not a bad spread. As we ate and watched the sunset Tilly entertained us as she sprang around the grassy plateau catching more Yo-yo flies. Just as the sun had vanished behind the horizon we felt drops of rain, time to retire indoors. 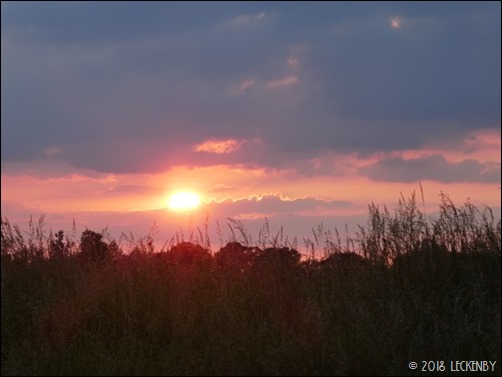 River Levels at 9am (yesterday), today

1 thought on “The First Bite Of Summer. 3rd June”