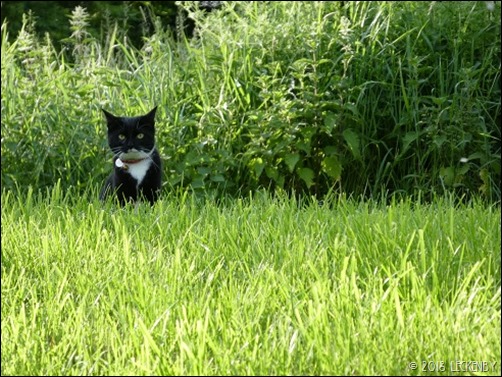 Tilly didn’t believe us when we said that there wouldn’t be any Yo-yo flies this morning, they only come out late afternoon, so she sulked for the morning on our bed.

Aim for the day was to reach Evesham, not far and to try a couple of chandlers for a fuse to get the bow thruster charging again.

The flow of the river had reduced a little this morning, so as we untied we weren’t swept out quite so fast from the mooring as had been expected but there was no need to push off. 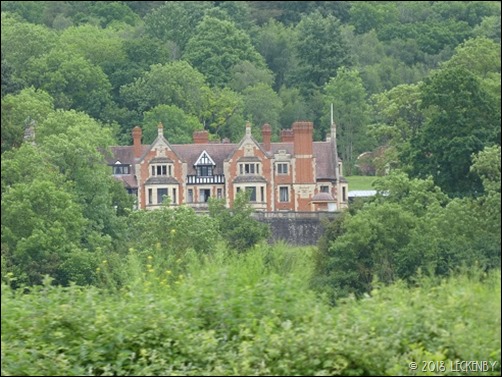 Whilst on the train the other day I’d spotted a house on a hill with two large dishes. Today we passed it Wood Norton. A Victorian house once the home of Prince Philippe, Duke of Orleans, the last pretender to the throne of France. In early 1939 the BBC bought the site so that they could relocate operations away from London. Temporary buildings were added to the site to provide an emergency broadcasting centre. Specialised broadcasters were trained here to work with the resistance and special operations groups in Europe, sending encrypted secret messages in what appeared to be normal entertainment broadcasts. The BBC’s monitoring service was run from here until 1943. After the war it became a training school, but ready should a nuclear attack occur, in the 1960’s a new wing was built which houses a nuclear fallout bunker beneath it.  Now the house is run as a hotel and conference centre with the BBC still retaining it’s technical and operational training centre in the grounds. 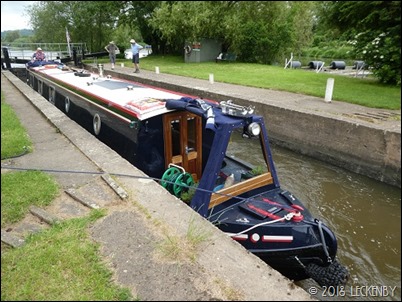 Chadbury Lock our only one for the day showed us that the level was now in the green and hopefully will stay that way until we reach Stratford next week. Two chaps were out for a walk and helped with the off side gates. This lock was the first major task of the Avon Navigation Trust being totally rebuilt in 1952/3 helped by the Royal Engineers, the first civilian aid project carried out by the armed forces. 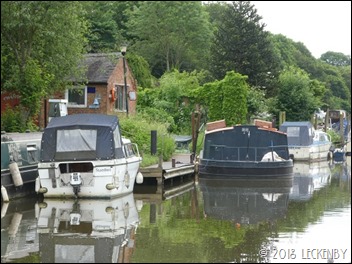 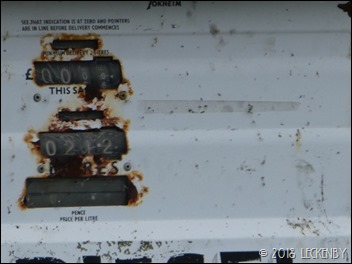 Half a mile on, Sanky Marine, our first thought for a fuse, we might have even filled up with diesel if their price was right. But they obviously weren’t interested in a narrowboat pulling in as only 10ft of service mooring was accessible by the diesel pump. So we carried on towards Evesham. 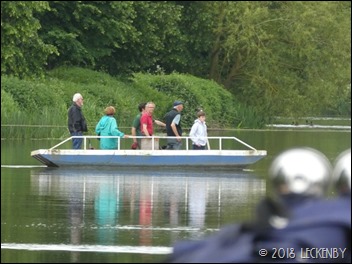 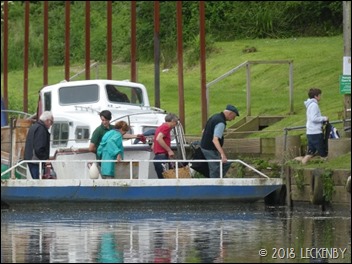 A mile further on we could see that Hampton Ferry was in use. Three long blasts of our horn to alert the Ferryman and we slowed down to wait for the wire to be lowered. Passengers got on the ferry which was then pulled across the river by hand to the Hampton side. The ferryman disappeared for a while, the wire dropped and then we got the thumbs up and could continue knowing that the cable was now on the river bed and not likely to fowl our prop.

The ferry has been in existence since the 13th Century, when the Benedictine Monks of Evesham Abbey wanted to be able to cross the Avon to tend a hillside of vineyards at Hampton. In 1929 the Huxleys moved to Hampton Ferry to operate both a smallholding market garden and the ferry the only link between Hampton and Evesham. They set up fishing contests, Eileen opened a cafe serving breakfasts to the increasing number of anglers which has now transformed itself into a restaurant. A campsite was added where asparagus was once grown, so Hampton Ferry is no longer just a ferry. 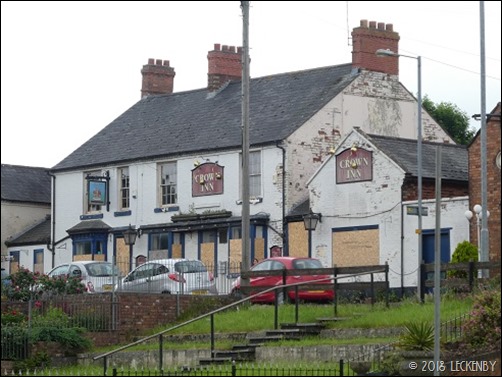 I’d studied Google maps last night to see which moorings would suit us best. The 48hr moorings nearer to Workman Bridge looked better than those nearer Abbey Bridge, the road being a little further away. As we passed the first moorings I’d been right to discount them, fixed pontoons with a narrow band of friendly cover up a steep bank, not ideal for a curious cat guaranteed to pounce. So we pulled in at Workman Gardens. 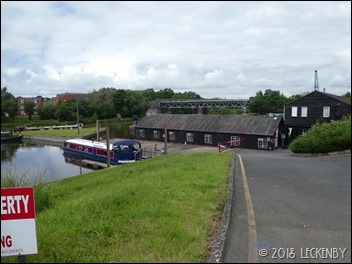 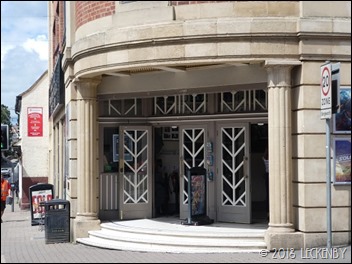 We walked up to Evesham Marina to visit the chandlers before they closed at 1pm for a fuse. Sadly, not mentioned on their website, the chandlers is only open by appointment on Saturdays and closed Sundays. We did manage to find a chap from the marina who said he could open the chandlers but would have no idea where they kept the fuses, so there was no point, a little like our walk! On the way back to the boat we tried at a garage, but had no luck there either. Mick had ordered one to be delivered to Pershore Post Office, but this had taken too long and still hadn’t been dispatched. We’ll try again in Stratford at the chandlers there. One good thing from our walk was coming across the Regal Cinema, art deco. Here you can go and see a film and have breakfast, the stalls are laid out with tables and the balcony has double seats. A big shame we didn’t fancy the film and it being the weekend the price was a bit dear. 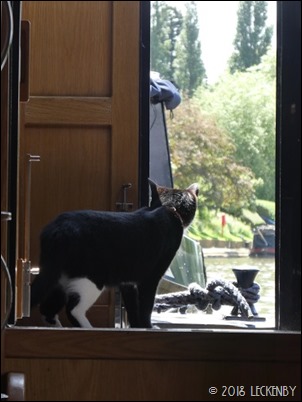 This outside had potential, trees, big big trees, grass to run around on. But it just wasn’t any good at all! Yes there were ducks and geese to stalk but there were also far far too many people, some of them sitting right by the back of my boat! So I decided to keep an eye on them and sit as close to the outside as I could without actually being in it. 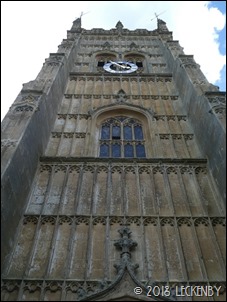 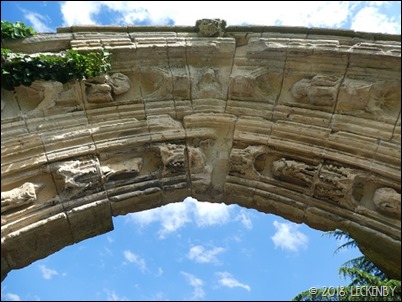 Abbeys seem to have been the vogue along the Avon although the one in Evesham faired the worst in the dissolution of the monasteries. The only buildings left of the second largest monastery in England is the bell tower and two parish churches, a small section of wall and an arch still stand too, but that is all. The bell tower marked the entrance and sturdily stands above Abbey Park ringing out its bells frequently. Two parish churches sit side by side with the grounds of the abbey. 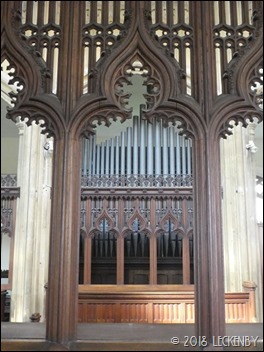 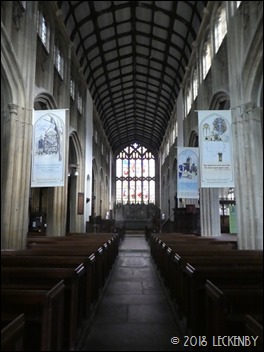 St Lawrence was the first to be built originally in 1195, but the current building dating from the 15th Century being rebuilt in 18th Century. A calm light church, looked after by The Churches Conservation Trust, few services are held here anymore. With no heating it would be far too cold for anyone to endure during the winter. A solo choristers voice rang out around the building, the acoustics amazing as the singer was hidden in a wooden chest. 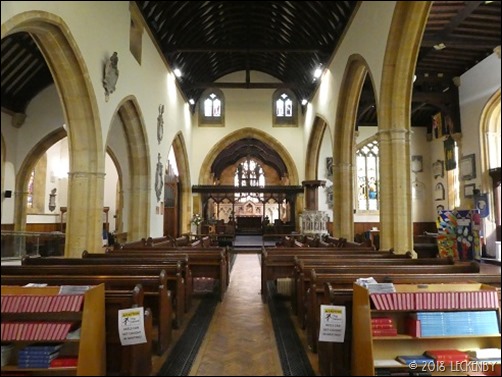 Across the way is All Saints, built 100 years later for a separate parish in Evesham. The atmosphere was so different, not helped by a chap sat having a very loud phone call about accommodation half in English half Polish. This felt very much like a normal parish church, carpeted nave, heating grills in the floor hardly surprising it was chosen to continue as the Parish church. We however preferred St Lawrences. 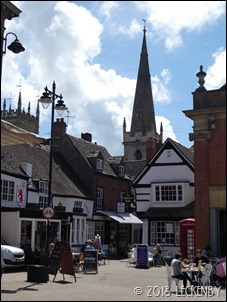 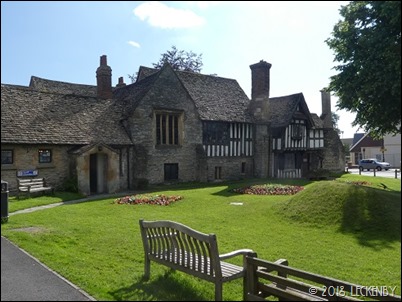 Back at Oleanna Tilly showed no interest in going outside again, preferring to sleep on the sofa. The warm weather meant that the parks on both banks were busy late into the evening, the bench nearest to us being fully occupied most of the time, we’ll move on in the morning. 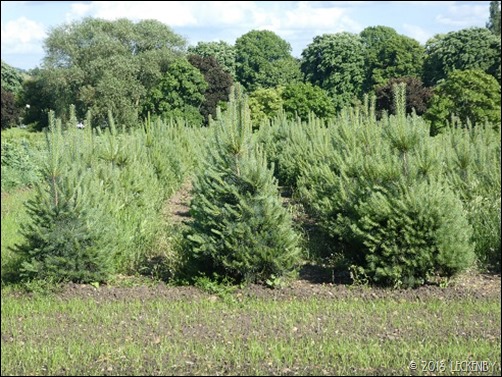