Tewkesbury, I do like a good… to Comberton Quays 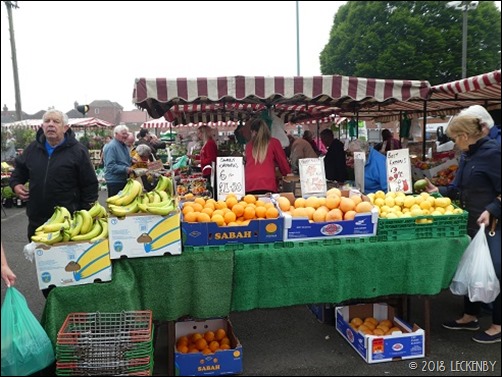 Some shopping was needed first thing and with the Saturday market in the car park behind Tescos we headed there first. Lots of fruit, veg and plants on offer. Sadly all the asparagus was from Portugal, we used to be spoilt with picked that day asparagus from the Balloon Tree near York back in the day when we had a car, you can really tell the difference. Only a couple of things picked up from the market, one being a new tape measure as our retractable one gave up when the chaps from Finesse were with us. Some more supplies from Tescos including this weeks newspaper and we headed back to the boat. 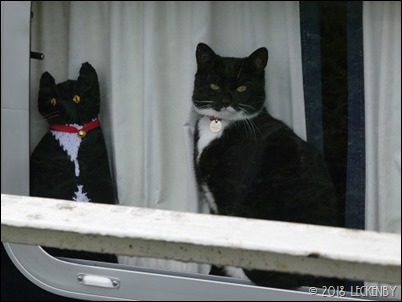 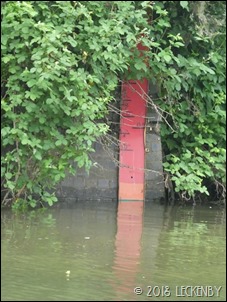 This morning we’d checked the river levels and yesterdays rise at Warwick was making it’s way downstream towards us, our side hatch was very easy to open as the river here had just reached amber. We decided that maybe we should try to cover as much ground as we could as we are meeting friends on Sunday and Monday and if the river came up any more our progress upstream would be affected. With more rain forecast we need to be on the cautious side. 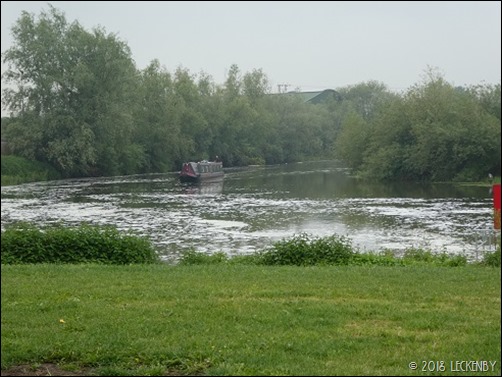 We stowed our shopping and made ready. The lock was busy, a constant flow of narrowboats and cruisers wanting to come or go down. As we started to pull our ropes out from the rings on the flood safe poles the people from the boat behind appeared. They were wanting to jump into our space as they preferred it there. Just as we pulled off I realised why I recognised the boat, we’d headed into Liverpool with them (NB Tranquillity) last summer. So many boats now seem familiar to us, are there really 30,000 on the network? 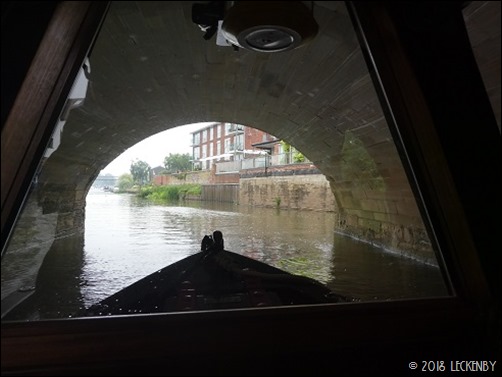 A beep on the horn and we were clear to go under King John’s Bridge, popping out to the view of large pontoons and the marina. 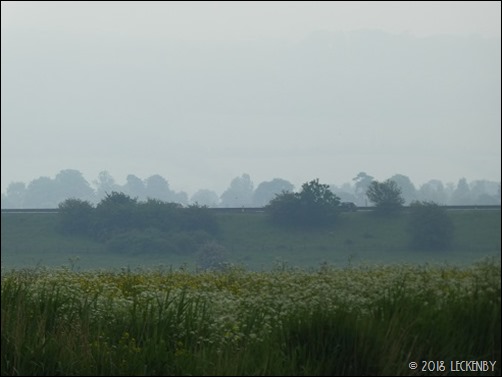 The wind was in our faces, grey mist covered the landscape, such a shame as the river banks are low so there were views out there somewhere. 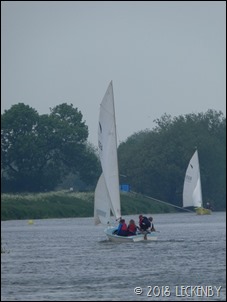 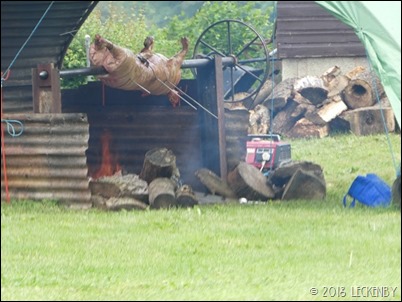 The moorings at The Fleet were full, space for a couple of cruisers on the paid for moorings. A boat following us pulled in at the Ferry mooring leaving us to continue up stream on our own. On past The Severn Sailing club. Here yachts were taking advantage of the wind and zooming down stream, one set off and zipped right across the river then tacked making it’s way upstream. Under a giant pig arc a full blown hog roast was turning on a spit gradually cooking over large logs, it looked like it would be very tasty. 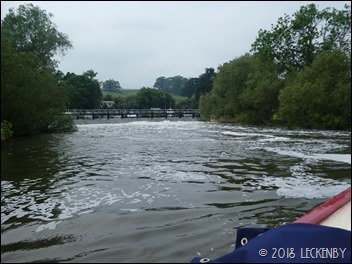 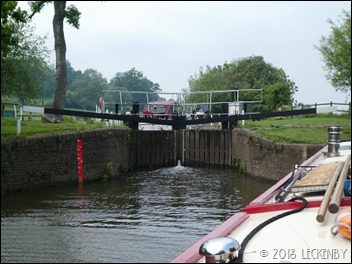 Soon the sight of the frothy waters from the weirs at Strensham came into view, the second one doing it’s best to push us off to the side, but with extra umph we pushed on towards the lock. We’ve bought a River Avon guide which has lock landings amongst other things marked. The first landing was short and hard to get into because of the flow from a sluice close by, the second more sheltered from the fast flowing water, but quite short for us. A cruiser was just finishing going up and a narrowboat came into view, so we tied up. I sorted my bow rope for ease of access onto the roof, from here I should be able to pick it up with the handle of my windlass as long as the locks aren’t too deep.

The narrowboat coming down was 70ft, getting on for another 3ft with all their fenders down. They were travelling with another similar length boat and had had to descend the last few locks backwards, reversing in. This gives you that bit more space with the curve of the bow sitting over the cil. When we first had Lillian we came down the Salter Hebble locks and had to do the top two backwards as we couldn’t open the bottom gates to get out. The currents and wind today were such that they were going to try to go forwards first. Short locks mean one boat at a time to be able to use the diagonal, fenders lifted and then slowly does it. No lifting the gate paddles straight up, instead easy does it keeping an eye on the stern at all times, should anything happen you need to be able to close the paddle quickly to stop the boat from getting cilled. They hoped that with the river being high this would afford them a few more inches above the cil. Gradually the water was let out and gradually the boat dropped still afloat when the levels equalled out. It took quite a bit to get their bow past the bottom gate but in the end it worked. 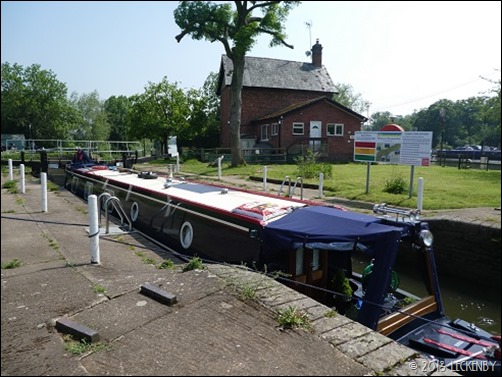 Our turn next. In we came and tied fore and aft. The crew on the other boat said the paddles were so fierce that even with two boats in a lock they were biffed around when they had headed upstream. So we lifted the paddle on the opposite side a bit first and then maybe a bit too much. Our bow line by now needed tightening and I’d turned it three times round the bollard so the lady holding it couldn’t pull it in. With assistance we got Oleanna back to the lock side and under control again. Our first River Avon Lock  done, plenty more to come. 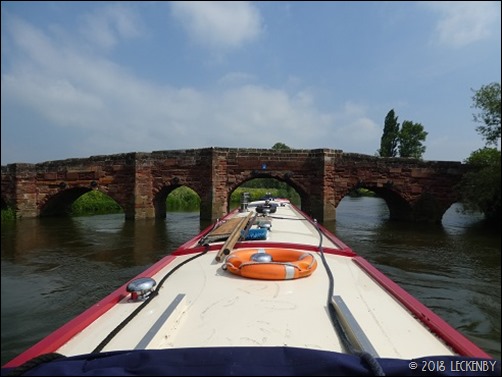 By now the sun had burnt it’s way through the mist and cloud and we could start to remove our outer layers. At Elkington Bridge we held back as a cruiser was coming downstream.  On a river you have more control going upstream, being able to stop where as they would just keep coming. The red sandstone bridge hole was quite small and the force of the water meant keeping a central line, but the height gauges informed us that we’d have plenty of space.

The river now winds and curls round the landscape, the banks filled with cow parsley and rape seed yellow. Earlier we’d wished for sun and now we had it and the views that came with it. What a pretty river.

Nafford Lock was soon with us and the open bottom gates welcomed us in (unlike on canals here you leave the gates open when you leave). I hopped off to work the lock, the bow rope on the roof working well, so far. Gates closed, three turns around the bollard with the bow line and I gradually opened up the paddles on the top gate, only lifting them fully when the turbulence abated.

The exit to this lock is very steep, a 90 degree turn straight away with weirs to the left and right pulling the water around you. We paused so that I could close the swing bridge, then I hopped on. Our perfect positioning now gone array as we ended up too far to port to get the bow over, even using the bow thruster didn’t work. Only one thing for it, back into the lock as far as we could on the starboard side and then give it some wellie to get the stern round and the bow clear of the weir boom. It worked, but obviously hadn’t for someone in the past. 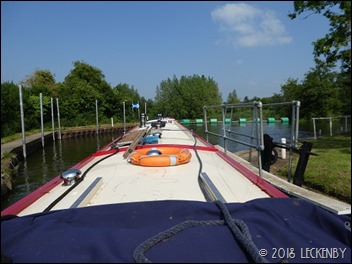 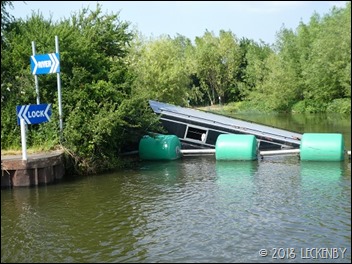 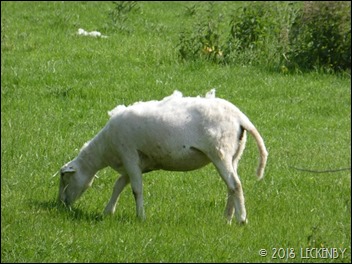 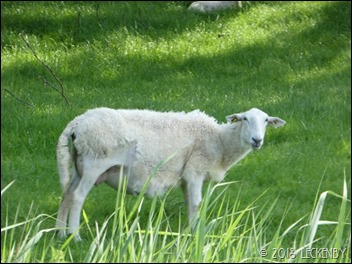 Our Avon guide showed three lots of moorings in the next reach, so did Waterways Routes, so we decided to stop at the first one that was free. The Avon guide maps are not to scale so what looked like a short journey to Comberton Quay turned out to be more like 2 miles. This of course would have been evident on Waterways Routes, but at the moment we don’t have the means to view it at the helm. We are working on this and hope to be able to use Mick’s old tablet, now redundant, solely for this once we’ve worked out how to get power to it as the battery life isn’t so good. 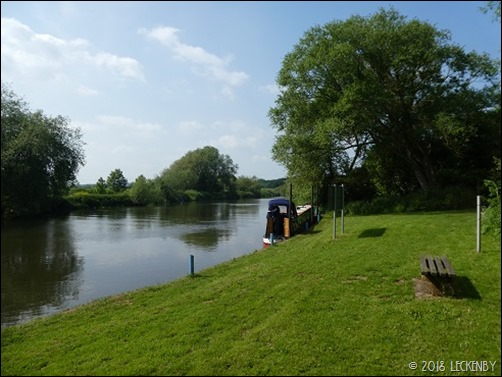 The flood safe mooring marked with blue poles was empty and looked perfect in the afternoon sunshine, a greener version of Bramble Cuttings on the Trent and Mersey. 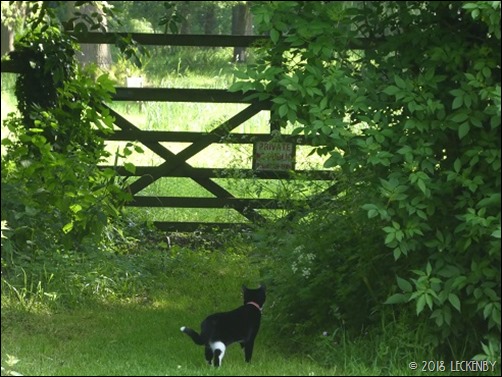 Perfect! Too bloomin’ right!!! Trees, friendly cover, sideways trees, gates and signs, and if you looked hard enough holes to put your arms down. Three hours was not going to be anywhere near long enough. 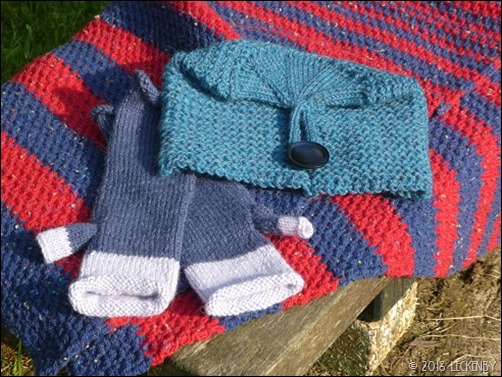 Here was a good location in the sun to take some photos of my latest makes for my Etsy shop, I just need some time to list them now. 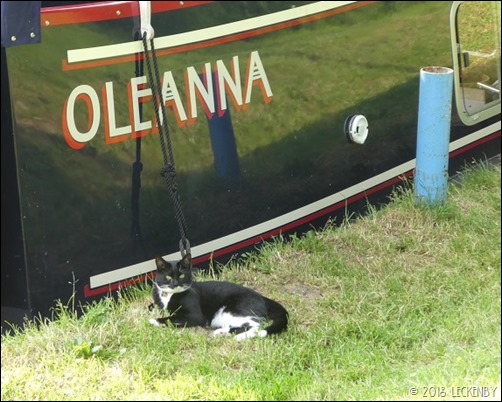 As the evening progressed the air filled with seeds from the willows, fairies floating by on the gentle breeze. The surface of the river was covered, our food fluffy and where ever you looked inside the boat there was a layer of them that would waft up to drift back down again. It’s going to take quite a bit to get rid of them all. 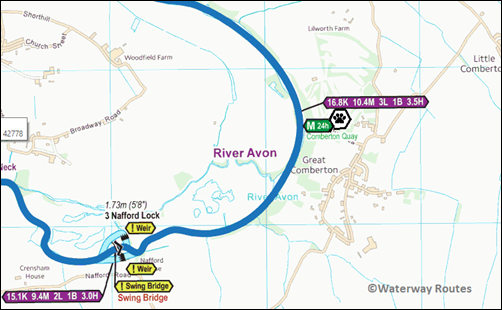