Rain pouring on our roof is what we woke to this morning. The forecast last night had suggested showers, but they all looked like they would skirt happily past us, but no they were falling on us. This was eating into our day of exploring Tewkesbury (I do like a good…). By late morning it was easing a bit so we ventured out. 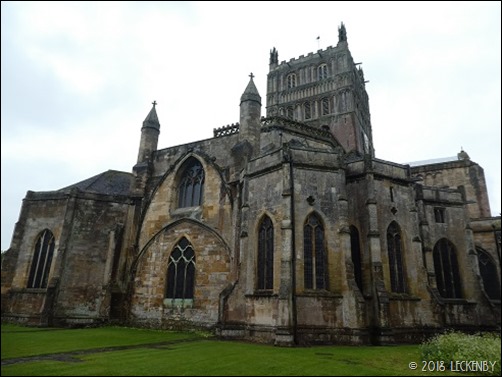 The building of the Abbey started in 1102, built to house Benedictine monks and was near completion when it was consecrated in 1121. As always with such buildings additions were made through the centuries Embellishments to the nave roof were added in the first half of the 14th century in the Decorated style. It has “probably the largest and finest Romanesque tower in England” (Pevsner), which can be seen for miles. Each building faze is quite easy to pick out from the others as you wander around. After the dissolution of the monasteries in 1540 the Lady Chapel and other sections were demolished leaving the Abbey Church which was sold to the parishioners for £453. Changes have continued through the years to this great solid building. 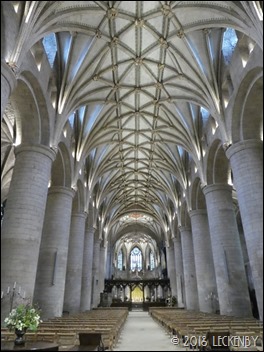 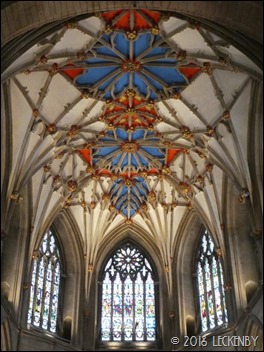 The first thing that struck us was how fantastically the interior was lit. Normally a bit of thought is put into such things and details of pillars are picked out. Occasionally you notice that the focus of some lights has been knocked and nothing of any importance has been highlighted. But here a lot of thought has been put into the lighting, illuminating everything and accentuating the beauty of the building. 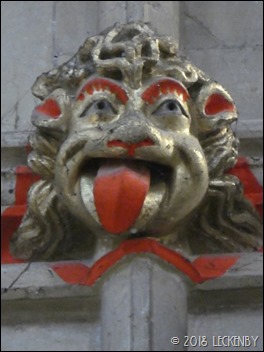 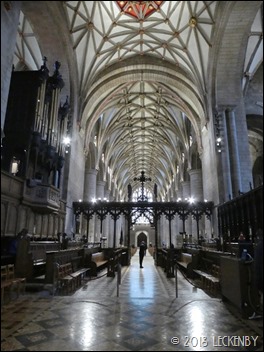 Wonderful ceilings everywhere, some painted in red and blue, with embellishments picked out from the stonework with a border of red. There are so many faces up there looking down. 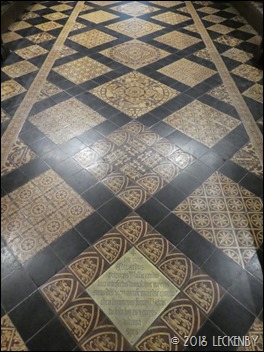 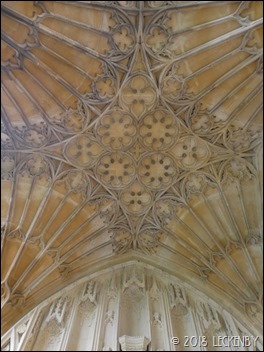 Many tombs surround the nave and small chapels sit everywhere. Everything and everyone labelled. It felt as though there should be so much more to the building, which at one time there was. Scars on the exterior show where the cloisters had once been and the foundations of the Lady Chapel are still marked out with flag stones. 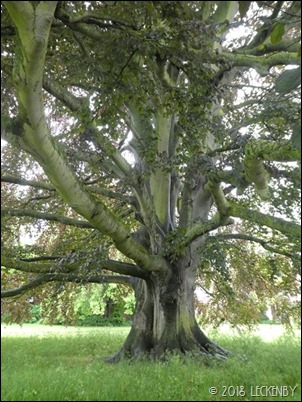 A wonderful huge copper beech tree spreads it’s arms across the manicured grounds showing off it’s colour in the rain. 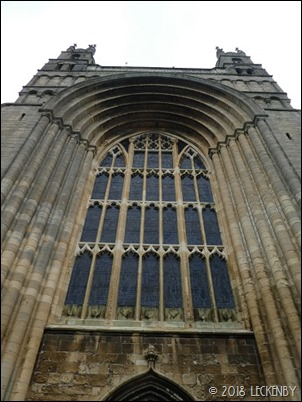 The organ has been undergoing a major refurbishment, large wooden boxes holding the pipes sat behind barriers waiting for them to be refitted. Two men were working at tuning those pipes already fitted, strange alien reverberations shivering through the air with the occasional note blown through. We did hope that they would be stopping for a wedding that was gathering, nothing worse than trying to say your vows as a G# is brought into tune. 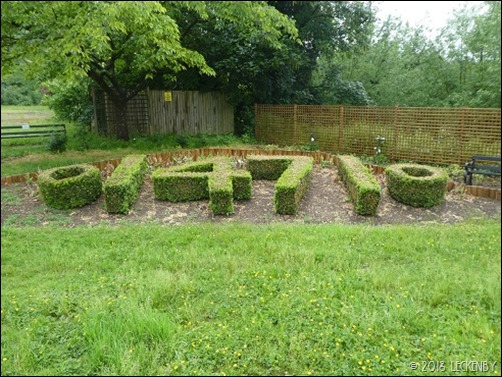 The other thing I had to do whilst here was visit the battlefield where the penultimate battle of the War of the Roses took place. We’d noticed on one of the notice boards that the battle had taken place in the Bloody Meadow, how forward thinking people had been to name it so! Positioned just to the side of Lower Lode Lane we went to find it. At the junction with Gloucester Road is a topiary. At first Mick wondered why they were celebrating the number you dial to find out who had last called you  and I wondered why 47% was so important. Then the penny dropped 1471 was the year the battle took place! 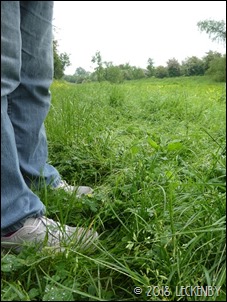 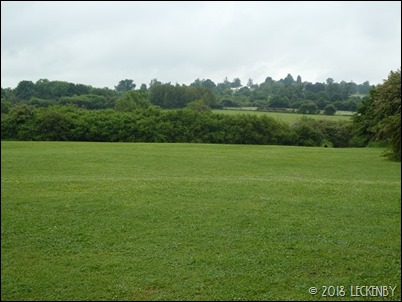 There is a Battlefield walk that you can do, which we only discovered on our search for the meadow. Along side a narrow brook I stood where the Lancastrians, under Queen Margaret’s commanders Somerset, Wenlock and Devonshire were defeated by Edward IV’s Yorkists under Edward, Gloucester and Hastings. Walking to a far more manicured area we could look out as Queen Margaret’s party had just before all was lost, from here they retreated over the River Severn at Lower Lode on horse back. 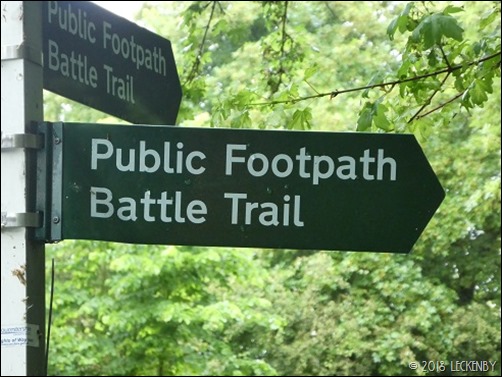 Every year since 1984 the battle has been re-enacted here as part of the Tewkesbury Medieval Festival which takes place in July. It is regarded as the biggest Medieval gathering in Europe with over 2000 people taking part, many re-live the whole experience and knights can often be seen around the town. No wonder Peter Laird’s character in Knights in Plastic Armour said the immortal line from the play ‘I do like a good Tewkesbury’. 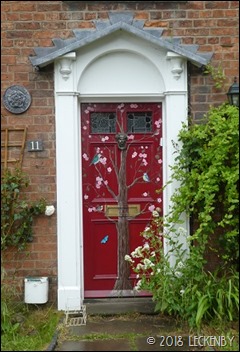 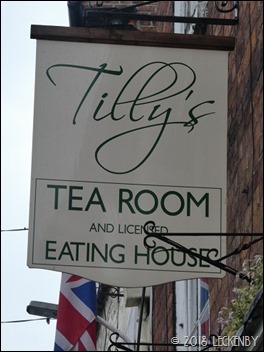 A toasted sandwich back in town was needed and where else could we go but to Tilly’s Tea Room. 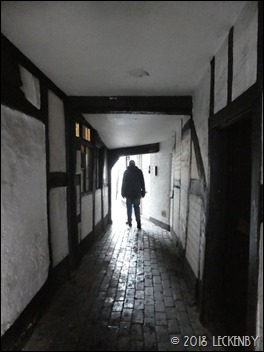 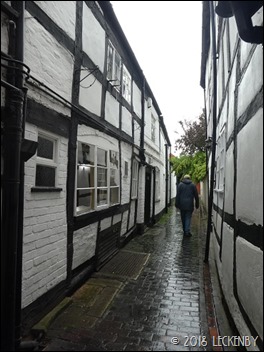 We then spent the afternoon wandering up and down some of the many alleyways. Here is where most of the buildings give away their age and construction. 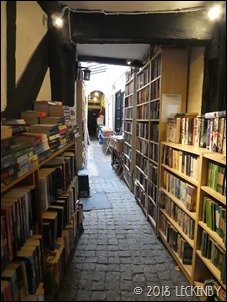 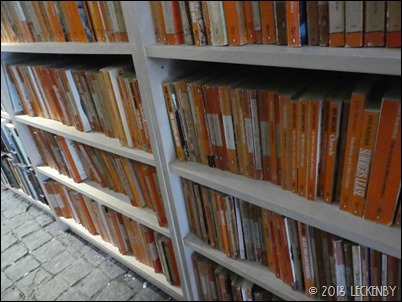 One such alleyway has been covered and is now part of Cornell Books . Shelves line either side with colour co-ordinated Penguin paperbacks and boxes of maps and in a rear room the owner jigs along to music as he sorts through the masses of volumes.

We walked back over the stone bridge and went to chat to the Lockie. The rain overnight was making us wonder how the Avon reacts. When we were stuck at Stourport a couple of months ago people were saying that at Tewkesbury the water was right over the fields, was this likely to happen, would we have difficulty moving, should we find flood safe moorings over the weekend. 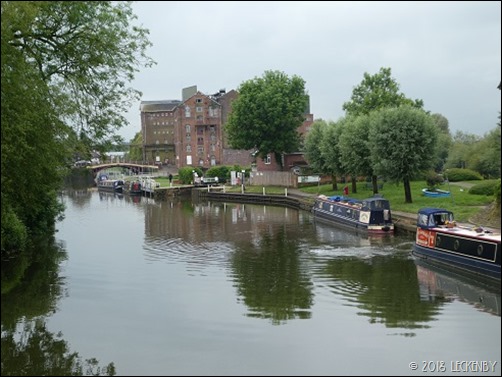 The friendly chap couldn’t give us an opinion as to what would actually happen, but as we were heading upstream we should be okay as it would be easy to stop should we need to. On every bridge there are level gauges so we wouldn’t just need to rely on those at locks. He came to see us later as he’d had a call from the Environment Agency saying that the Avon had gone into flood at Warwick, this is likely to make it’s way down to us, but he wasn’t saying to stay put.

We’ll keep a close eye on the levels, especially as there are thunder storms forecast in the general area and flash flooding may occur! We’ll see what tomorrow brings.