Worcester to Avon Lock Moorings, Tewkesbury (I do like a good…), River Avon 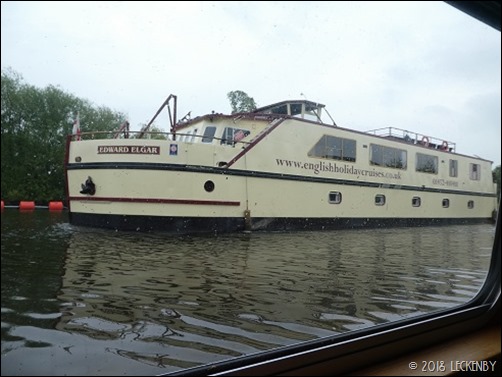 Rain! That wasn’t meant to happen until much later today. We had a leisurely breakfast and gradually got ourselves ready for the off. Most of the boats around us braved the rain and pushed off heading their different ways whilst we stayed put. At one point I’d just clicked start on the trip computer and we were just about to roll the covers up when the skies opened up again. It just doesn’t feel right setting off when it’s already raining so we waited some more.

By midday there was a break, covers rolled right back on the cratch, waterproofs and life jackets on and we pushed off away from our mooring heading upstream away from the weir to wind before returning to the lock. Diglis Lock is a little unnerving as the Lockie stays in their hut, how do they know that we are ready, there must be cameras so that they can see into the depths of the chamber. Once we’d dropped down onto the next reach of the river we were off, heading southwards on a calm but very grey day. 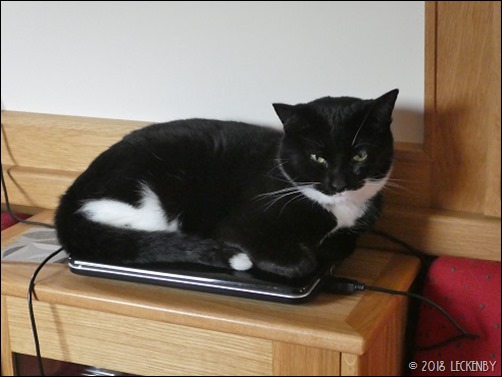 Despite Tilly’s escape pod being out she chose to keep the trip computer warm, more like over heating! As we’d left so late we elected to have lunch on the go rather than pulling over at Upton. 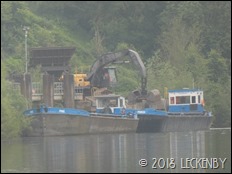 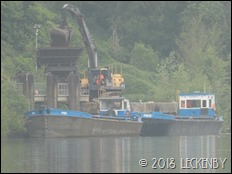 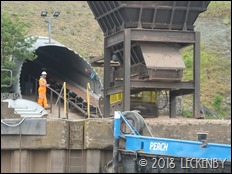 The gravel barges were working again today. One being filled another heading back for a new load and a third one having the gravel dug out of it’s hold by a large digger. The jaws picking up a tonne at a time, rising high into the air, swivelling and then dropping it into a shoot before a conveyor trundled it up hill to add to the mountain nearby. 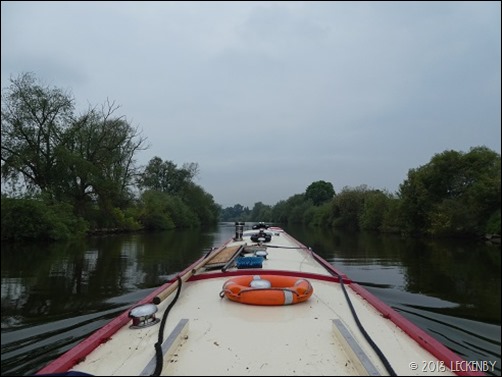 Over the fields we could hear Curlews calling and the distinctive high pitched cheep of a Kingfisher kept me on my toes. Every now and then it would dart along the bank and out of view, then back again, all far too quick to get any photos. 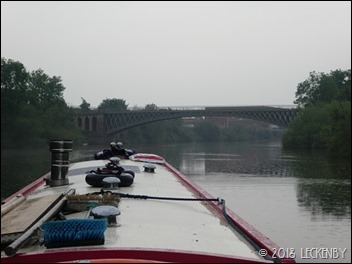 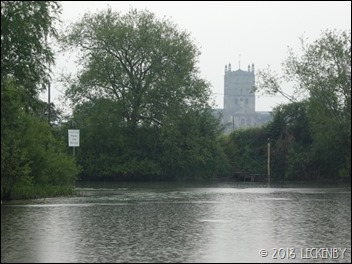 After nearly three hours we reached Mythe Bridge and started to slow down from our speedy 5.8 mph. At the junction with the Avon there is a sand bank that runs out south west. If you are heading upstream from Gloucester into the Avon it doesn’t cause too much trouble, but heading down stream and turning in or coming from the Avon towards Worcester you must avoid cutting the corner. 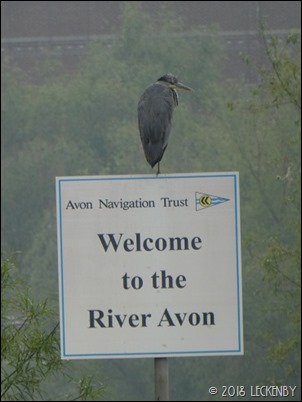 We waited until we could see up the Avon before turning in, a sulking Heron sat on the sign there to welcome us. 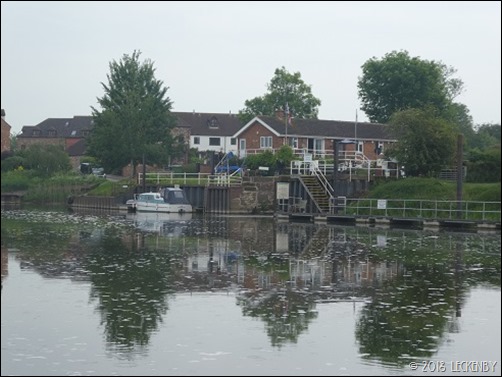 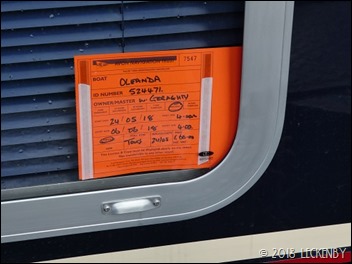 New waters again and the first time Oleanna has been off C&RT waters. A short distance ahead we could see the lock landing with a red sign asking us to sound our horn , which we did and a minute later we got a cheery wave from the Lockie who then went to set the lock for us. A green light and we were in. Fore and Aft lines passed up and returned to us once passed round a bollard. They don’t like you to use only your centre line. Once we were level with the pound above there was time to sort out our visitor licence before we were let out of the lock. £50 for a week or another £10 for a second one. No brainer really, two weeks please and 2 nights mooring so that we can have a full day to explore Tewkesbury (I do like a good….), at £3 a night we’d be daft not to. 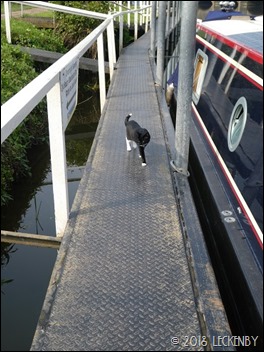 We were pointed to where we should moor then turned to the left, filled with water before reversing back to our mooring on a fixed pontoon the other side of the lock entrance. A quick Cat Health And Safety check of the area and it was decided that it was a suitable Tilly mooring despite being on a river.

At last, shore leave again. Except I got to walk above the water, that was a bit weird, how can you keep an eye on it when it’s under the thing you are standing on? No good trees, some sideways ones though. I had a good explore, but with the lack of friendly cover there wasn’t much to keep me occupied so instead I curled up in my escape pod for a snooze. 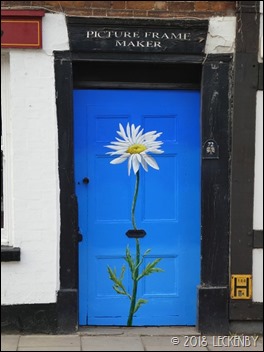 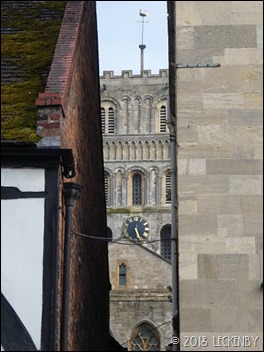 With the need to replenish Mick’s stocks of Fisherman’s Friends (he has succumbed to the lurgies), we had a short wander into town to find some. Much bigger than we’d expected we had a walk up the High Street, stocked up and then returned to the boat walking along the river. 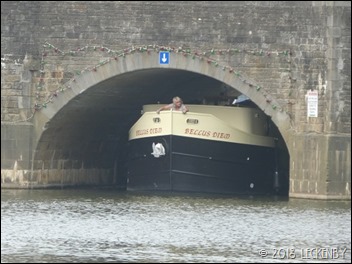 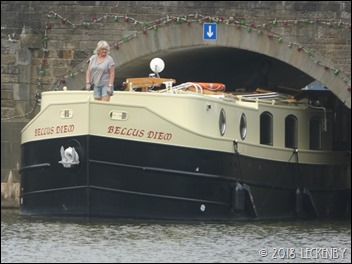 When we got back to the lock we heard a horn sound from King John’s Bridge, the bow of a large boat was just showing through the large arch. It was Bellus Diem that we’d moored next to in Gloucester last bank holiday. They carefully nudged through the bridge and then chatted to the Lockie as to where to moor for the night. A cruiser was moved on so they could moor up by the bridge and they winded to get port side on, so easy when you have bow and stern thrusters. We sat and watched them rebuild their wheel house once moored, I have to say I’m glad we only have a pram cover. 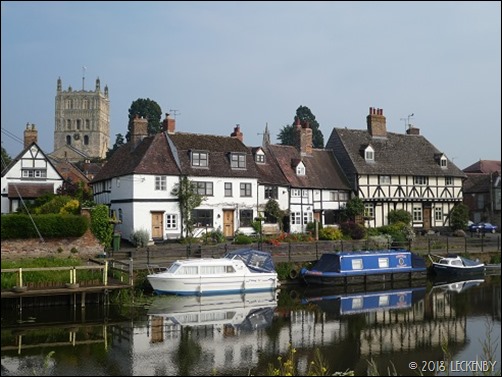 From what we’ve seen of Tewkesbury (I do like a good…) we are in for a treat tomorrow, plenty to look at, just hope the rain stays away.