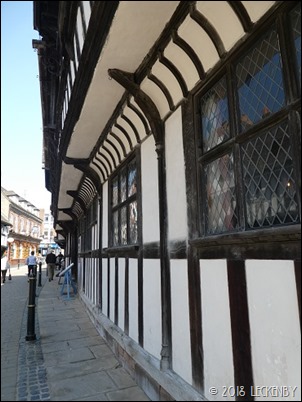 With National Trust cards in hand we found our way to Greyfriars House and Garden this morning. Before 1pm there are guided tours of the house and then in the afternoon you can wonder around the property on your own. We had to wait a short time for the next tour and were joined by two more couples. Our guide was knowledgeable, very quickly spoken and what we thought would be a quick taster of the history turned into quite a detailed 45 minutes. 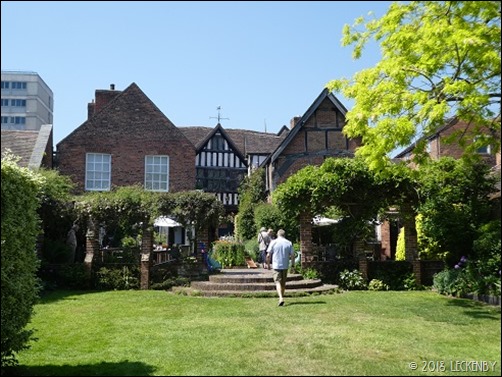 Greyfriars was built around 1480 by a wealthy merchant, becoming a home to wealthy families up to the 17th century and in 1699 a baker purchased the lease and divided the house into two.  It was houses and  shops for the next 200 years. The sale of clothing, hats, bread, leather goods, umbrellas and china riveting all took place in the house.  Through the years extensions were added including 10  three storey cottages in the back yard. The small narrow staircases in the house which wound their way up behind fireplaces were replaced with a grander wider staircase. 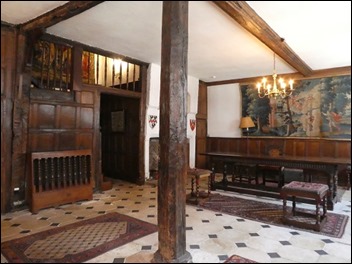 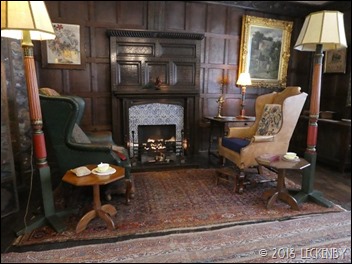 The house gradually fell into disrepair and by the 1930’s was threatened with demolition along with the houses in George’s Yard at the rear. The local archaeological society fought for the house to be saved and after the Second World War it was carefully restored and refurbished by the Matley-Moores, Elsie and Malcolm, two siblings, who remained Greyfriars tennants until their deaths in the 1980s. The house is laid out still with their furnishings. 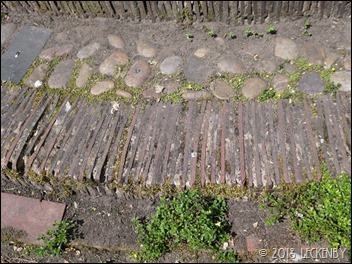 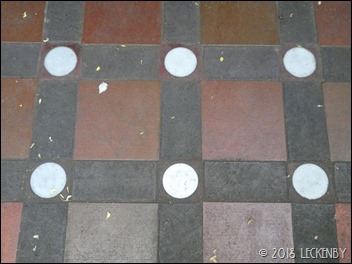 They spent getting on for around £500,000 in todays money on the property. They were some of the first reclaimers and used recycled materials where ever they could, whether it was brought in from other houses due for demolition or Gentlemans Relish pots which were used as tiles in one of the summer houses. The families who lived in the cottages in George’s Yard were rehoused and their homes demolished to create what Malcolm thought was likely to have been a Tudor garden, reusing a fireplace for a fountain and the roofing tiles for the steps. 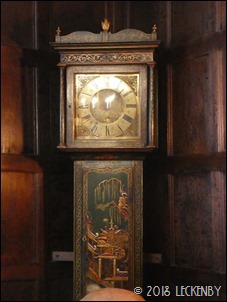 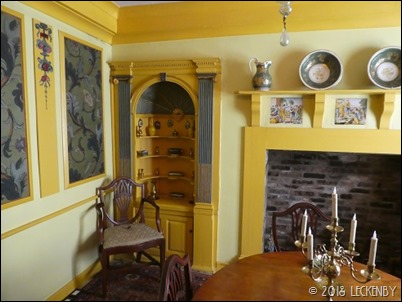 Influenced greatly by what they saw on their holidays in Europe, returning with tiles and glass ornaments wrapped in a clean pair of knickers. Tiles were added to the dining room, which was then decorated in shades of Georgian yellow to match. 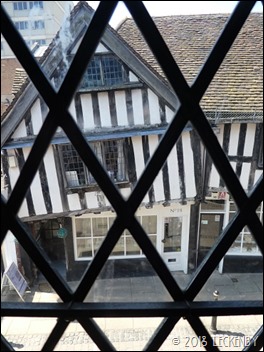 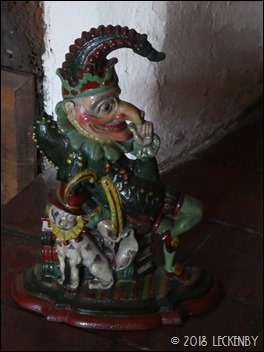 Elsie is also said to have rescued 70-90 door stops from a closing factory nearby, she then spent the following winter painting them, many decorate the house today. Standard lamps were made form old bed posts and decorated by Elsie in her favourite colours, green red and gold. 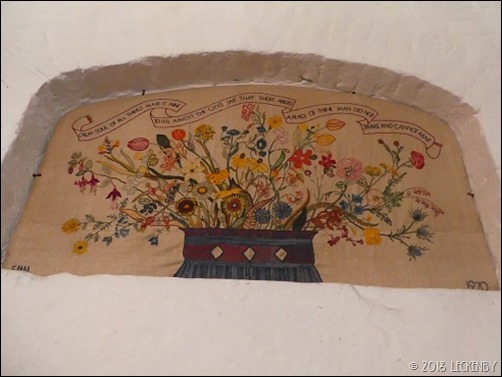 After the tour we decided to loiter and then be able to go round on our own, having more time to look at things in detail. The front door was opened up and in each room there was a very enthusiastic volunteer guide ready to impart their knowledge to you. In the past when we’ve visited NT properties we’ve felt a little bit rushed through the property, or been surprised at how little information there is at hand, or been overwhelmed at the story of one family or person from the house that you don’t get to know who even built the house. Today we had the opposite. 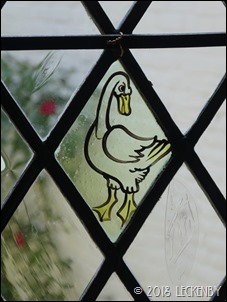 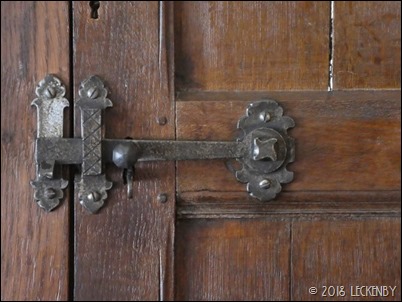 Each guide in turn would ask if we’d visited before, we’d just done the tour and wanted to look round at a more leisurely pace for ourselves. Being the beginning of the afternoon they were keen to chat away at length and tell us all that we’d already heard. One rather wonderful old lady took a little while to warm up into full flow and then there was no stopping her! She’d been wound up and her spring was going to carry on until she’d exhausted the room of any air. We gained a few more tit bits about the house and it’s occupants but had really wanted to just look around on our own. As I tried to read a poem about the River Severn that had been rather wonderfully illustrated a guide talked at me about it, I just wanted to read it Thank You!!!

A wonderful house and garden to visit, we just had a bit too much information overload. 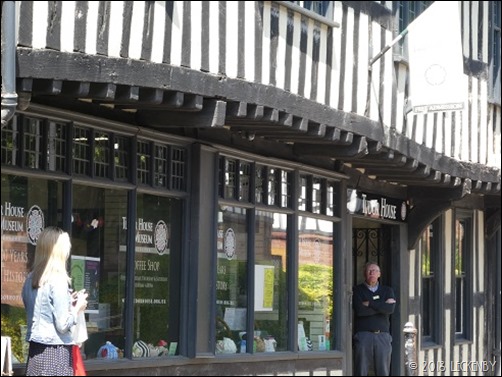 Across the road we had a look around the Tudor House Museum. This had been a brewery until some poor sole fell into a vat and died,it had also been used as an ARP warden station during the war. The rest of the museum suffered a little from too much information. 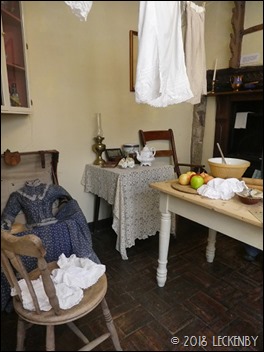 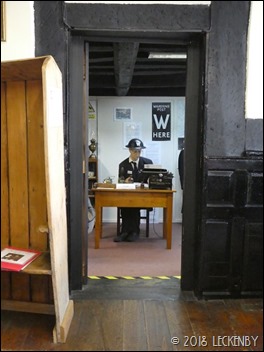 Huge swathes of writing about industry in the area, gloves, Lea and Perins covered the walls in such detail that we just skimmed the top of it all. Here was another case of guides being too enthusiastic. The air began to be sucked from around us again as she started to explain about how beds were made, ‘Goodnight, sleep tight!’.  Mick politely stood and listened as I looked round the room, I’m sure he was enthralled at the information that he was being bombarded with about embroidery and the different stitches and techniques, she’d been working on a design to make  matching curtains and an eiderdown for the bed too! 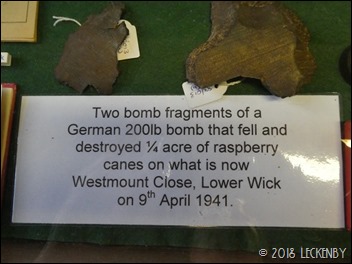 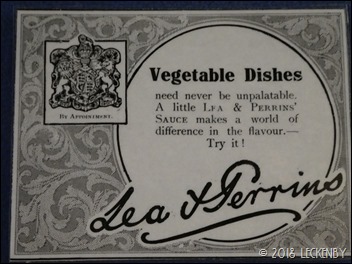 In the end neither of us were taking anything in, poor lady. It would have been so much more interesting if she had demonstrated the stiches or even got us to have a go on a little sampler, but instead we just got a wall of words. We managed to escape before all oxygen had been used. 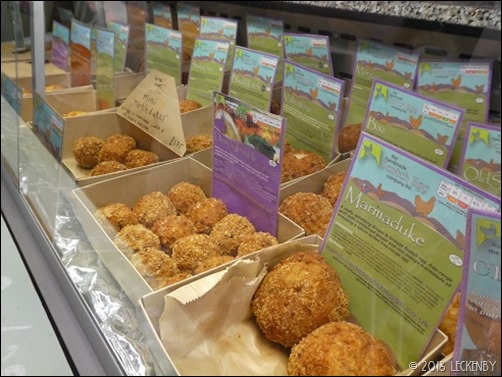 Outside after getting our breath back we popped into The Handmade Scotch Egg Company, we’ve not had any pork pies for a while so thought we’d try one of these. A very friendly voice came out from nowhere and was shortly followed by the lady who was behind the counter. In front of us was a vast array of differing flavours and types of scotch eggs. 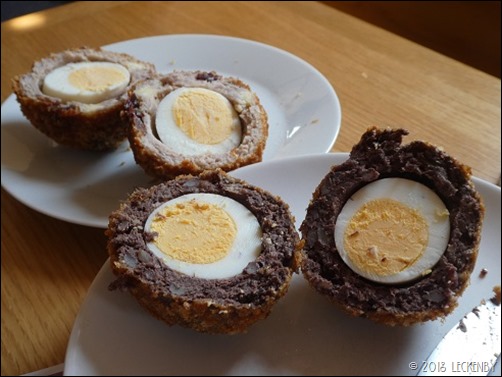 Just which to choose? We perused the choice for sometime and then went with a recommendation, a Valentino (wensleydale, cranberries and sausagemeat) and a BlackWatch (black pudding and pork). Very nice they were too. 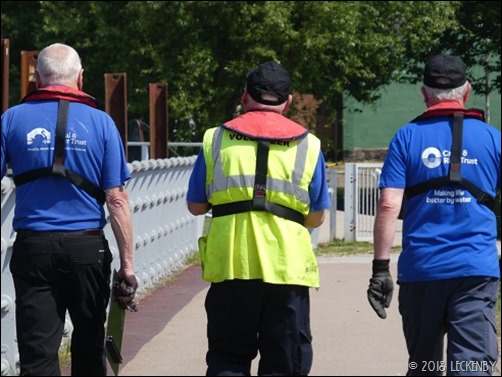 A quick shop at Asda for a few bits to get us down river and then we walked back along the canal. The C&RT new branding was starting to show it’s face with signs being replaced in the new bright blue. Still no signs saying that you can’t moor after bridge 2 towards the water point where we’d been moved on last month. In fact if we hadn’t been told, we’d think you could moor there for 14 days, there is space for at least three boats before the services. 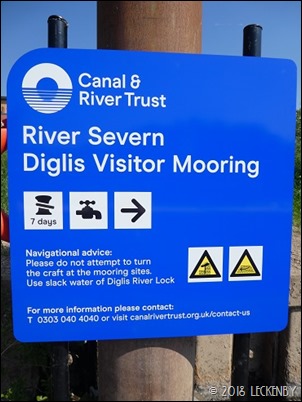 Back at the pontoon the newish looking black sign (that didn’t have a mooring limit) had been replaced with a new sign which now gave you 7 days. We’d be alright staying tonight.