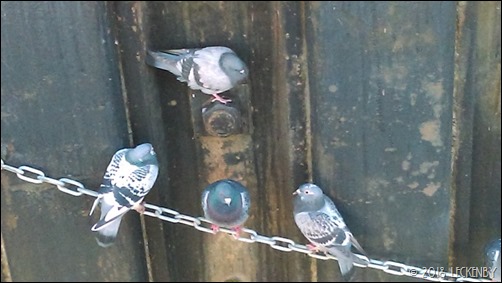 It’s not often you get woken by a boat moving in the middle of the night. In London you would rouse from your sleep take note and drop back off. It took me a couple of minutes to realise that it was unlikely to be a narrowboat as the only way onto the river at 4am would be through Diglis Locks as all other locks are operated by C&RT staff, something was not right.

Tilly had beaten me, the curtains were already twitching. The engine was getting closer and I could hear voices. Then lights swept their way across the river. Into view came a rib with three people, all wearing red beamed head torches, two very powerful torches were being used to check around the boom across the top of the weir cut. The sound of another engine, much closer this time, was followed by a second rib coming up slowly past the pontoon, searching between the moored boats. Someone must have been reported as having gone into the river.

The boats worked their way methodically along the boom and moored boats, gradually heading towards the lock. They returned a while later, one boat heading back up stream, the other pulling into the bank on the far side. They had pulled in to check on the weir, lights flashing across the falling water. About half an hour after I first noticed them the rib collected it’s crew and headed back upstream. It didn’t feel like they had found what they were looking for, hopefully it was a false alarm.

A few more hours of sleep before the alarm went off. Mick was heading to London for the day to pick up some important post from my brothers. Our post delivery can be intermittent and may take as long as six months to reach us, but if there is anything important we give my brother the heads up. Most things if important are scanned and emailed to us, but todays post included forms that need filling in, so it was worth a day on trains to get them. 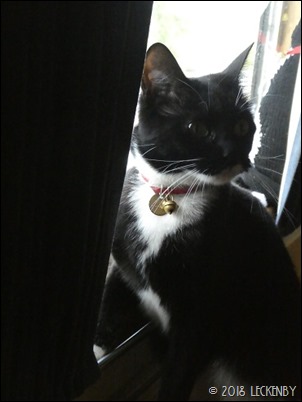 Tilly and I waved Mick goodbye and I made sure I was dressed should a space appear on the pontoon. After a few movements by boats ahead of us sorting themselves out, a boat finally moved off from in front leaving an Oleanna sized gap. On a canal I’d have quite happily untied Oleanna and moved her up by myself, but here I was on a river with current, next to a weir, the wind had just decided to have a good blow and Tilly was adamant that she would come out and help! I did need some assistance, but not from Tilly.

Just as I’d got Oleanna ready to move, Terry popped his head out of the bow doors on NB Grace in the midst of having a tidy up. He very kindly gave me a hand. With their solar panel flattened he untied our stern rope as I undid the bow and we pulled Oleanna up into the space ahead, both boats now had sunlight to port and starboard.

A day on my own meant I had a list of things I wanted to do. Mick not being around meant  I could have a longer look round the shops, sit and read about new crochet stitches and have a go at designing my next woolly project. Don’t get me wrong, Mick doesn’t stop me from doing such things. It’s just that I’m always aware that he gets bored of shoes in the first shoe shop, so a third or forth don’t normally get a look in. I’m the same, one day at cricket was fine, but two, no thanks. 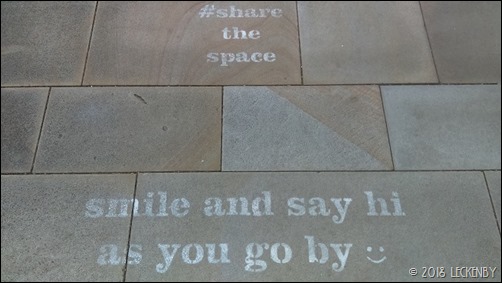 A walk to Sainsburys via the new footbridge downstream of Diglis Locks started my day. As I left the boat a number checker was doing his rounds, then wherever I turned there was a sea of bright blue t-shirts and C&RT badges, far too many Lock Keepers everywhere. There was a comment from one lady about sandwiches, just what was going on? The penny didn’t drop until later in the day when I realised that it was the launch of the new logo for C&RT. 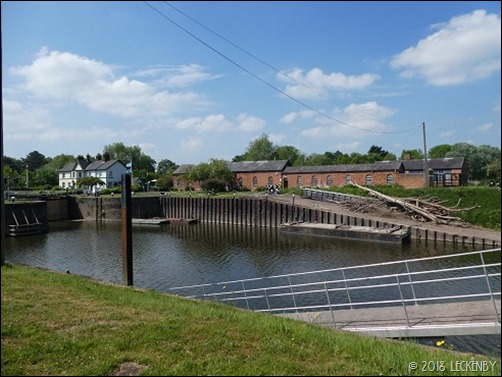 At Diglis Lock island there sits three lock keepers cottages and a row of what looks like old workshops similar to those at Naburn on the Ouse. One of the cottages you can rent as a holiday let. 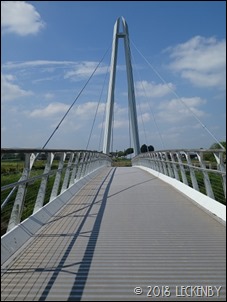 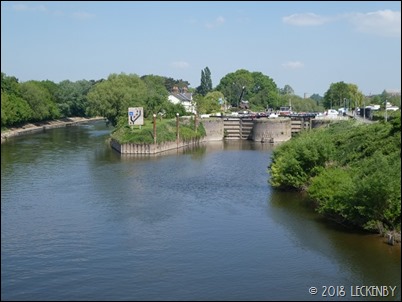 Just down stream is the new, 2010, footbridge which was built to try to encourage people of the city to walk more, creating another river crossing has made a circular route. I could see that a boat was on it’s way up in the barge lock, it turned out to be the Edward Elgar the hotel boat from Gloucester with people stood on the upper deck. 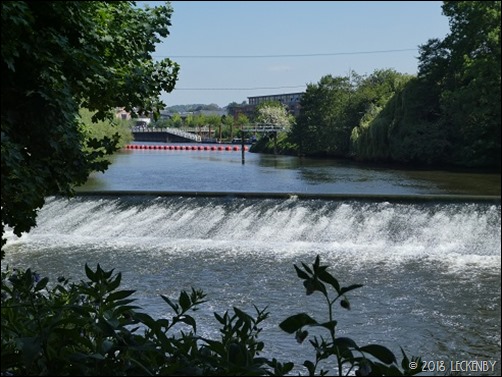 On the far bank paths continue down the river but I decided to walk back towards the cricket ground. From here you get a great view of the weir and how big it is, no wonder it took those people so long to check it last night. 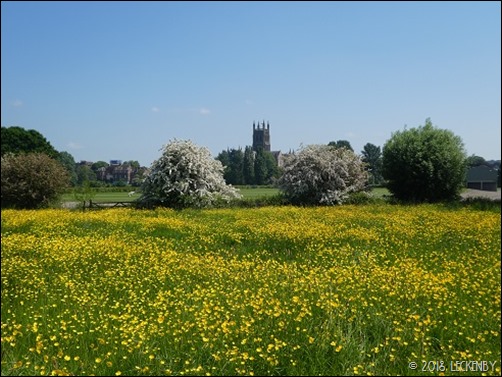 The fields to the west of the river, Chapter Meadows, flood in the winter and autumn. In the spring rich grasses grow here and footpaths take you around the meadows. I followed part of the aptly named Buttercup Walk which took me across the fields towards Sainsburys. Looking back gave me great views of the cathedral. 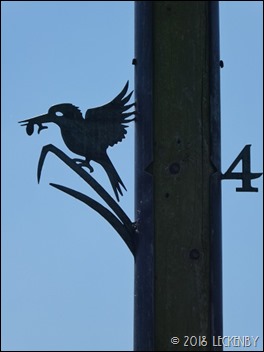 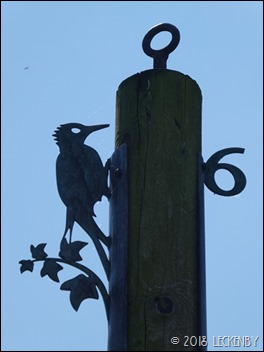 Just as you turn out of the fields is a flood level indicator, much fancier than the one at Upton. This one has a salmon at the 1m mark, then birds and animals mark each following meter. In the floods of 2007 the water reached the Kingfisher at 4m.

A quick shop for light things and then I headed into town for a mooch round. I’m after some summer sandle/trainers, even though I looked in five shops I still didn’t find any. I did however buy some graph paper to help me work out a pattern for a throw I want to make influenced by our visit to Slimbridge. So much of the afternoon was spent drawing out designs, checking for any suitable crochet stitches and doing a couple of sample pieces. These still need a bit of work before I launch into my project in earnest. 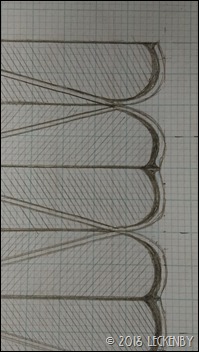 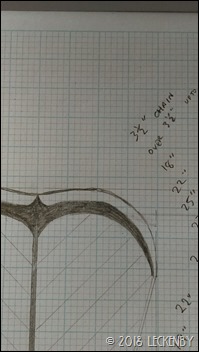 By the time Mick had managed to return home, delays and cancelations delaying him, it was quite late. So we decided to head out for something to eat. A visit to The Anchor provided us with beer, wine, a tasty burger and fish and chips. All very nice sitting in their outside courtyard.