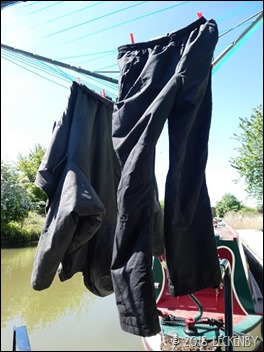 With the sun out and enough waterproof spray for a few things we got the washing machine going first thing with the first load of winter waterproofs. First a good gentle wash to get rid of all the mud and then whilst still damp a spray of waterproofing, a little rest for them on the grass before they were hung up on the whirligig to make the most of the sunshine. There’s another batch that will need doing before we can finally pack the last of winter away under the bed.

Whilst in Gloucester we’d been used as target practice by the seagulls. Luckily they weren’t as large as you get in Scarborough otherwise we’d have sunk by now with all the added weight! The roof was quite a mess, so I decided to give it a wash down, the cabin sides will have to wait until the towpath is at a more suitable height and much less dusty. The scrubbing brush came out and I worked my way along the off side before lunch and then completed the job in the afternoon. 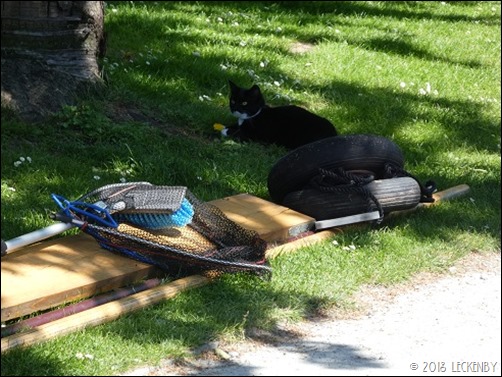 Mick spent much of the day working his way through his post. Huge envelopes filled with information about cashing in pension plans. There is a lot to think about so it was best to just leave him to it.

With the roof all nice and clean again I decided to have a look at a troublesome mushroom vent. All our fittings are chrome, this was with the hope that they would carry on looking good without too much need for polishing. Brasso is normally seen as a boy job and to a certain extent it was a Mick job on Lillian, well the two maybe three times he did them in three years. All of our mushrooms are still looking reasonable, a wash and quick polish with a dry cloth and they sparkle again. That is apart from one. It is nearest to the chimney and is on the vent pipe for our composting toilet. Maybe it’s the aroma and heat that has given this mushroom a very tarnished look to it. 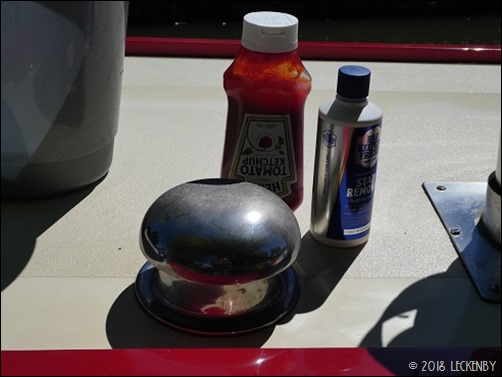 Washing didn’t work, Bar Keepers Friend didn’t work, Pink Stuff didn’t work, boat polish didn’t work. So I thought I’d try some Tomato Ketchup. I’d heard that it polishes tarnished brass and Mick recalls cleaning pennies when he was a kid with it. I smeared some over the vent and left it for a while. Maybe I wasn’t patient enough or maybe it just didn’t work, but there was little sign of the tarnishing shifting. Maybe something designed specifically for the job would do it. Silvo, it didn’t work either!

This evening I’ve done some reading on the internet and tomorrow I’ll give white vinegar a go, maybe with a bit of bicarbonate of soda. But if anyone has any other ideas I’d be grateful. 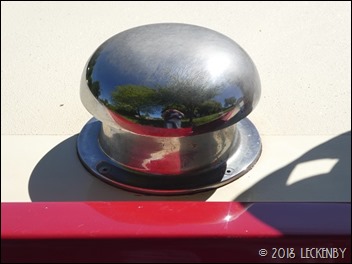 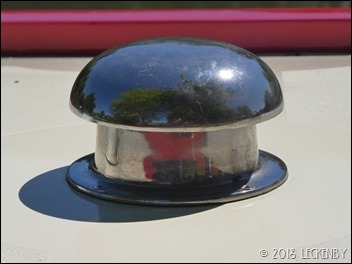 Last night when Mick had turned the TV on for some reason it wasn’t receiving any signal. Here we’ve had good reception, but now nothing, nada, zilch! He’d checked allsorts, adjusted the aerial, retuned, but with no signal this wasn’t doing anything. Taking off the wall socket where the aerial plugs in he discovered that it was faulty, so last night we had to watch TV via the Chrome Cast which rarely gets used now. Today as a break from pension stuff he bought a new socket, wired it up, but still no signal. Grr! Our aerial needs a power supply and the new socket couldn’t do that. Another trip out and a non isolated socket purchased wired in and hey presto TV again.

At last I was given freedom, all day in the sunshine. That blackbird however is starting to annoy me, he shouts at me wherever I am and keeps scaring off any friends I might find. Woofers came and went, few noticing me in the friendly cover. It was hard work out there, but I struggled on occasionally returning for a drink and maybe a five minute sit down, before I was back at it. I think someone is going to sleep incredibly well tonight.

5 thoughts on “Aerial And A Pesky Mushrooms. 14th May”