Weir 2 to not quite Netherwich Basin 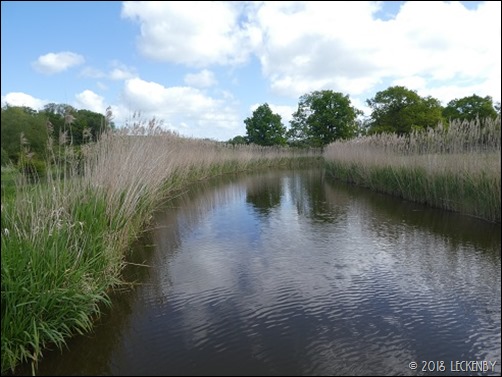 Before setting off we took advantage of being in the middle of nowhere to empty the yellow water tank after all there were plenty of plants that would make the most of a little extra nitrogen. This however delayed our departure and we watched two boats go past heading towards Droitwich. The first was the Diamond Resorts boat which most probably had all the locks ahead of it set, but the following boat had to empty them, we could tell as the weir we were along side increased in noise. 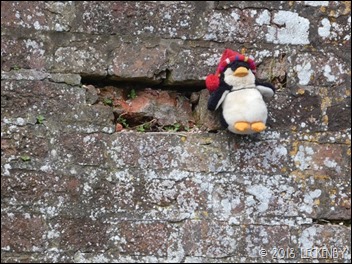 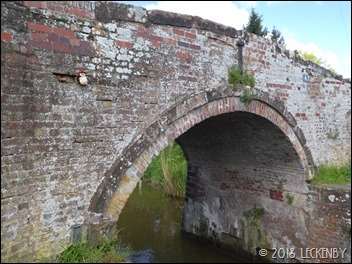 The gates on these locks are so heavy and take some bumping to get going. A penguin watched over us at the first lock of the day, not sure how he’s been fixed to the bridge but he definitely has a good view. From here there was a just under a mile to the next lock and then the following four were all within walking distance. Three years ago at Porters Mill Lock I met a lady who lived in the cottage alongside, she was tending her garden. When the canal was derelict in the 70’s she bought the lock and land across from it to expand her garden, but the lock was obviously needed when the canal reopened. In compensation she was given a strip of land along the side of the canal, she didn’t seem happy about it as she crossed over the lock gates to clear petals from her off side garden. Today the garden didn’t look quite so cared for, certainly the offside hasn’t been weeded for sometime. 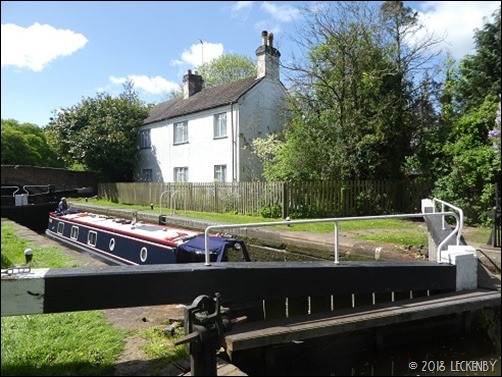 A willow tree hung low at the top of the lock and bobbing in the water I could see the top of a boat hook. We got our hook and managed to retrieve it. It must have been swept off someone’s roof by the willow tree, maybe one of the boats ahead. 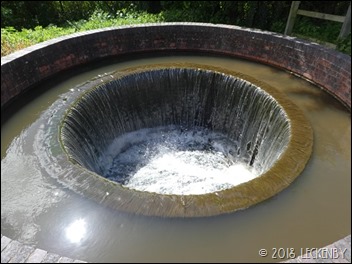 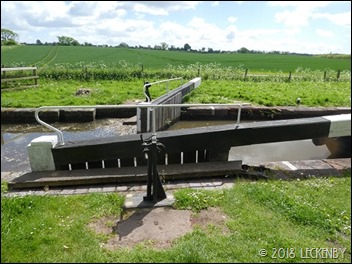 The next two locks we met boats coming downhill and we arrived at locks with open gates. Then as we rose in the penultimate lock I could see activity up ahead. There had been someone wearing red there who I thought had been from a boat infront of us, but now there were a couple of people and a lot of noise. A paddle was opened up and I could hear faint screaming, just what was going on up there?! I thought it best to close the gate behind us and then walked up to see what was happening. The lock gate opened revealing it’s contents. 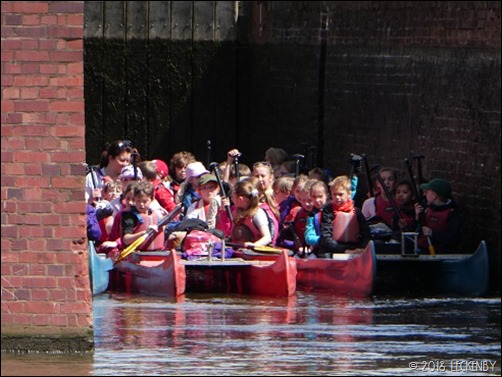 It was chock a block full of kids in canoes. The pairs that you get which act as stabilisers to each other, well there were three of them abreast and three deep, a sea of kids with the accompanying noise! 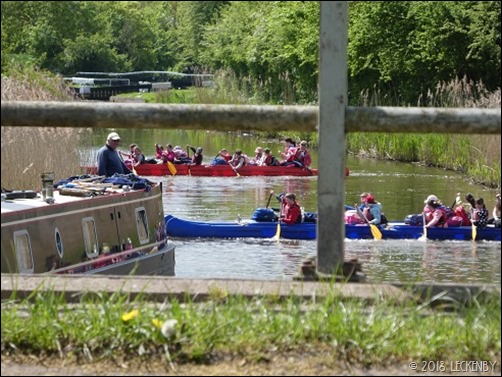 It took them quite a bit of time to vacate the chamber, co-ordination was not their strong point, listening to instructions was also not high on their capabilities, but they managed it in the end. Mick just sat patiently to one side keeping Oleanna’s weight out of the way until all the boats were clear. They all turned below the lock, not sure if they were stopping for lunch or going to come back up the lock first, but at least we’d be well out of the way. 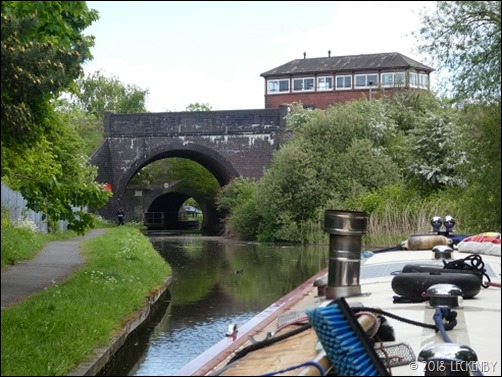 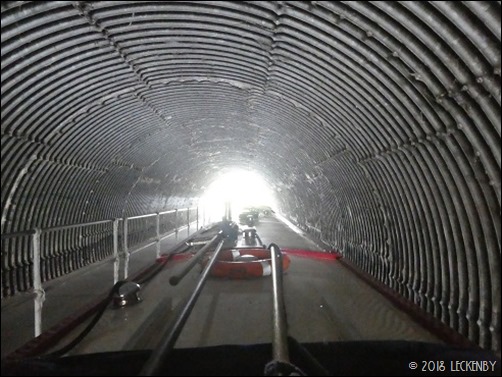 On we pootled the three or so miles to Droitwich. At the two railway bridges the canal changes from being broad to narrow, there is a winding hole just before a long almost tunnel made from corrugated metal. This must continue in a circle under the water as if you are too close to the off side you ground. We had to keep stopping to realign ourselves to carry on. 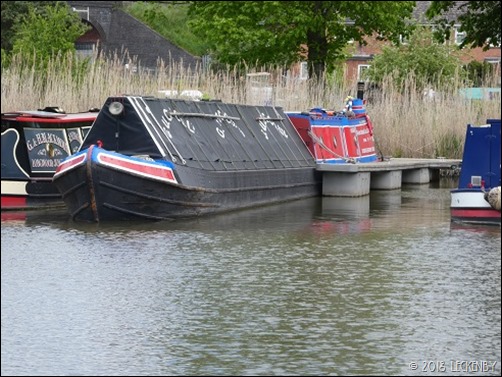 Netherwich Basin was still very full. Last weekend had been St Richard’s Festival in Vines Park and most of the volunteers were still moored in the basin after helping to dismantle the tents and clear away the park. We pulled up and filled the water tank first before deciding where to moor. The basin moorings are on pontoons behind a locked gate, all very good but not ideal for Tilly. So we pulled up just after another boat alongside the park, here Tilly had trees and some rather well manicured friendly cover she could play in and we wouldn’t be limited to 48hrs. 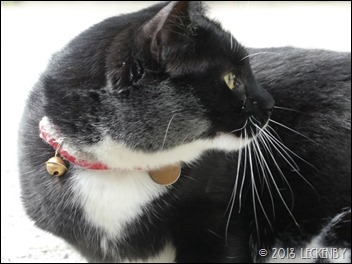 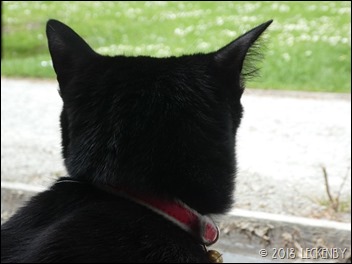 Having chosen what we thought was a good spot for Tilly she then adopted her short leg walk with her shoulders being the highest point of her body. Too many woofers, I could smell them! I needed a good coating of dust to make myself more threatening. I stayed close to the boat and closer to the ground. Once I’d got the measure of the place it was hard to decide between trees or the smart friendly cover. 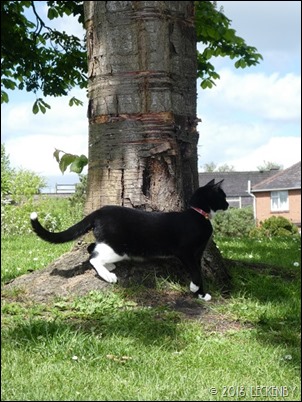 A quick walk into town for some milk and bread before returning to give Mick a quick hair cut, he was looking particularly scruffy which wouldn’t do for his Birthday weekend. Tilly now feeling better about her surroundings returned with a friend, doors were closed so quickly! She then dropped her playmate, it was still very much alive, time to confiscate it. The best way to do this was to pick Tilly up when her mouth was empty, then put her inside the boat, allowing her friend to make a run for it. HOW DARE SHE! We were only going to have a short game of cat and mouse! I’ve been without friends for so long. I spent much of the rest of the evening keeping an eye out for my new found friend from my shelf. It must have been wondering where I’d gone.