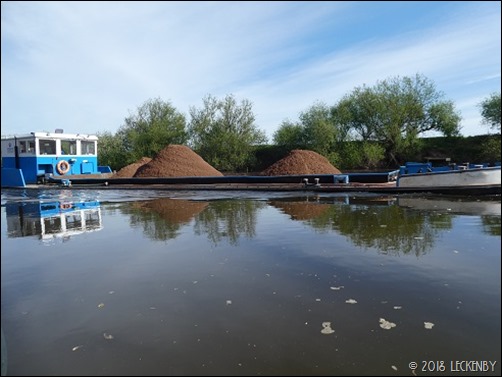 The noise of a boat engine gradually loomed from downstream as we sat in bed with our cuppa. It was one of the gravel barges heading upstream to get it’s first load of the day. They are big boats compared to a narrowboat, but nothing like the size of Exoll Pride on the South Yorkshire Navigation, you certainly know that is coming and want to be well out of it’s way! Another came past as we had breakfast, than one returned downstream fully laden. 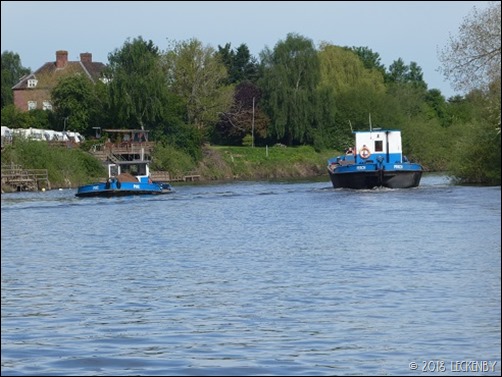 As the next empty one headed upstream it met a full one coming back, quite a difference in height. 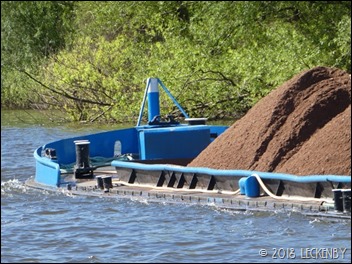 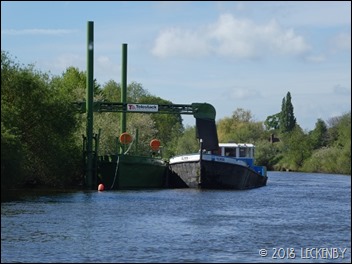 When we set off we managed to get a gap between the barges, passing the next full one soon before where they were being filled. They were pulling up next to a boat which was held in positon by two piles, a portable wharf. No need to tie up to it, they manoeuvred into position facing upstream and kept in gear to hold steady. The conveyor and shoot then started to fill the hold, diggers adding gravel all the time. These guys had obviously practiced loading a hold at the National Waterways Museum as they got their load correctly positioned and more importantly the optimum amount. Too little and it would mean more journeys at more cost, but more importantly not too much and the barge sinking (as it did in the museum!). 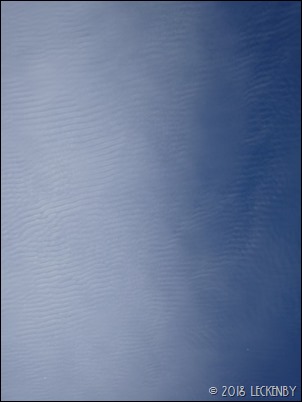 Another load of washing in the machine as we carried on upstream, a warmer start to today and no wind. The sky bright blue but with high clouds that looked like a groundsman had his time to rake them very neatly. 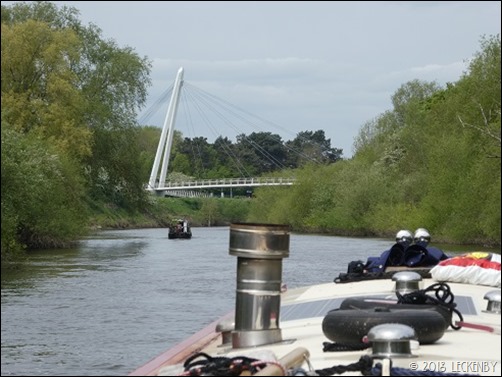 At the Worcester Southern Link Road Bridge we were catching up with the narrowboat we’d passed yesterday (they had moored up over night!). We radioed ahead to Diglis Lock and were told to call again when we reached the footbridge. No point in overtaking today, we’d end up in the same lock. The footbridge came into view and Mick radioed but got no answer, we turned the bend to see the green boat treading water and a red light flashing at the lock (the lock was being prepared). 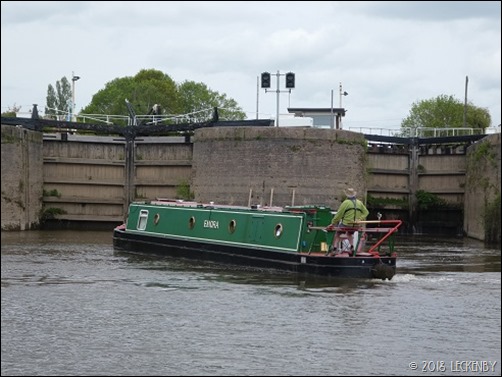 When we’d come downstream we used the smaller lock as work was happening to the bigger one. A bit of a surprise when the gates to the bigger lock opened for us, so much so that the green boat had to wind. We followed them into the lock slowly giving them space to get sorted with ropes, the lock keeper indicated that he wanted us on the same side of the lock, so we slowly edged our way in behind. The lady at the front had a boat hook and was trying to pull the boat in to the riser to pass a rope round it whilst her husband shouted gave her encouragement to hurry up before the back end came out too far. We held back, not wanting to add to the pressure, they could take as long as they wanted and it would be fine with us. Once she’d passed her rope round we nudged in gently so I could do the same, no words of encouragement from Mick, we take our time, I know what can go wrong and don’t intend on loosing another digit. 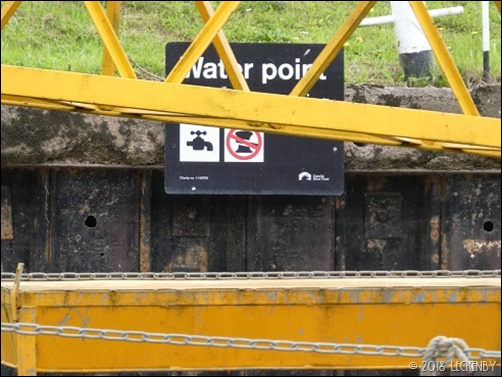 As with all the locks on the Severn the ride up was so gentle, you hardly needed a rope. Having both boats on the same side does help as the Lockie can operate paddles on one side helping to hold the boat in. The gates opened and we were back in Worcester. The green boat headed off ahead and turned in to go up to Diglis Basin whilst we’d hoped to top up with water, but a large workboat was using the water point mooring so we’d have to wait for Droitwich. 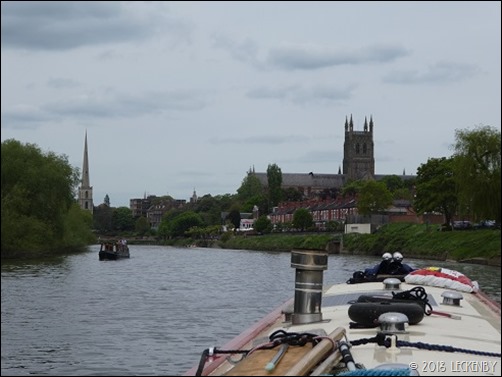 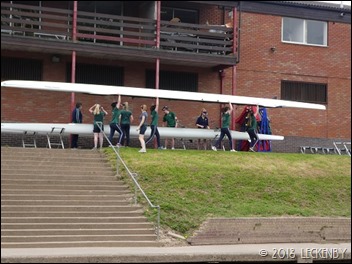 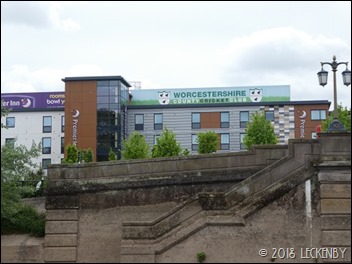 Lunch on the pontoon before we carried on upstream. Our timing was good as boats were appearing from the rowing clubs all making ready for an afternoon on the river. 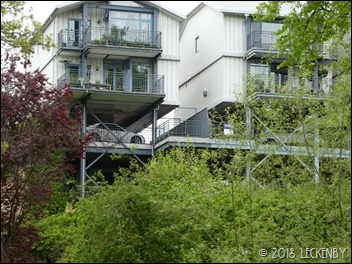 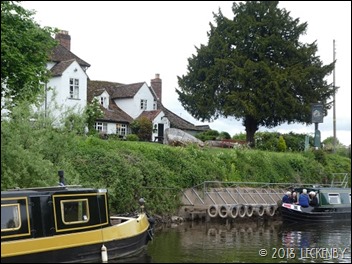 We’ve been along this stretch twice before and memories came back. The house missing a balcony that was for sale three years ago still has no balcony, the apartments that look like they have parking on the second floor and of course The Camp House, today we could only hear the peacocks. The pub mooring was full and another boat was just pulling away after a hopeful slow cruise past came to no offer to breast up.

As both boats arrived the lock light turned to green, neither of us had called him. We were instructed to pull alongside the other boat and just hang onto them, another very gentle lock and chance for a chat. 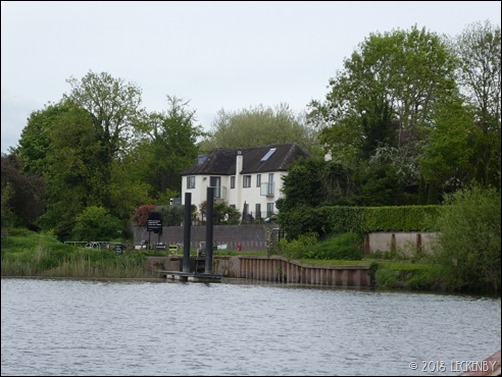 The gates opened and we set off first, not far to the junction with the Droitwich Canal. On the permanent moorings there was a Diamond Resorts boat, they had come down the canal hopping to turn, but the winding holes had been too short for their boat, so they’d had to carry on to the river. We pulled into the lock and waited for them to wind and join us to do the bottom two locks. I’d certainly not forgotten how heavy these gates are! 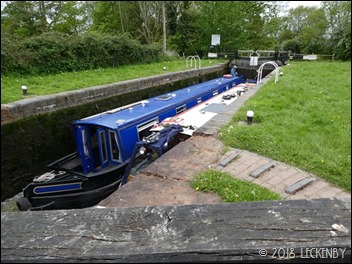 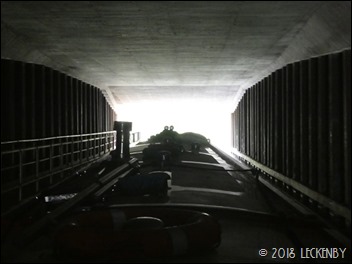 Above Lock 2 there are some moorings, the only moorings other than in Droitwich on the canal. An area was cordoned off for NB Scorpio ahead of the festival in Droitwich, all fine but with no dates on the notice, boats were avoiding mooring there and the festival was last weekend. The Diamond Resorts boat pulled in, but we carried on for a short distance to get a little bit further away from the motorway. 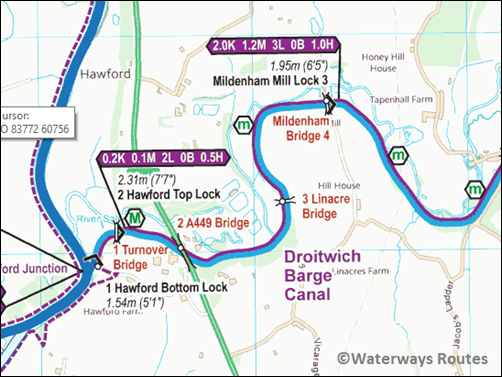 Three years ago we had noted how few places there were to moor, the majority of the bank being taken over with reeds. But today we were armed with more information, Waterways Routes had an m mooring  before the next lock, we just hoped that it would be free. 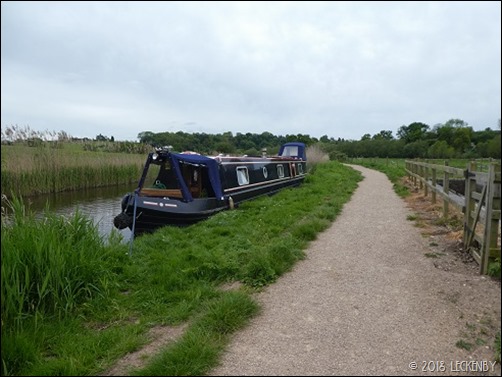 A gap in the reeds just where it was marked, marvellous. Once our location was noted and the trip computer turned off the doors were opened. Dry land at last! Grass, a few sideways trees, holes to put my arms down, friendly cover, although I was warned not to pounce in it too much as I might get wet paws! Almost worth a Tilly stamp of approval, it’s just the trees were a bit far off, no bunnies and in the next field were some of those horse things. I don’t like them! 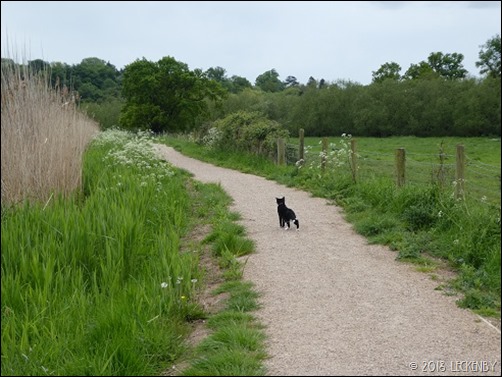