Hopefully with the Upton folk festival having finished yesterday the crowds would have all moved on and there would be space for us on the moorings, if not then we decided that we’d carry on to Worcester rather than breasting up three deep. We’ll be returning this way so we’d get a second chance. 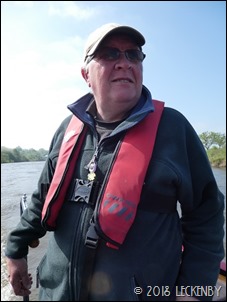 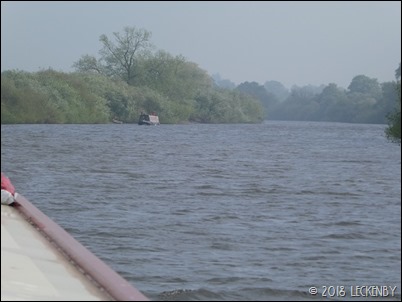 We pushed off at just gone 10am with extra layers on. Yesterday we were covered in sun cream wearing shorts and t-shirts. Today the t-shirts had a jumper and a fleece over the top. The world out there was a choppy hazy one as we carried on up stream. A couple of boats came past us into a head wind all wrapped up too. Gradually patches of blue appeared overhead, then they joined together and the temperature started to rise. 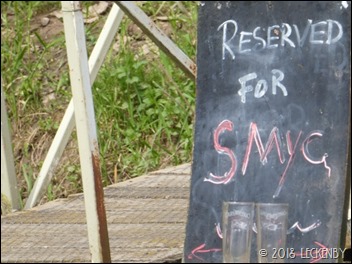 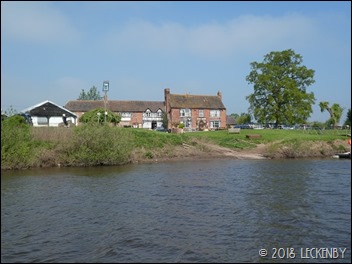 The moorings at the Yew Tree pub were empty but looked like they’d been reserved at the weekend, maybe for regulars. 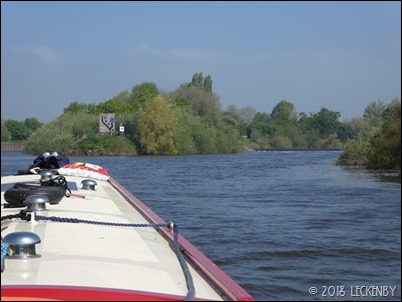 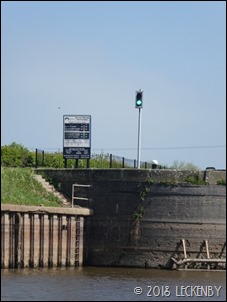 An hour after setting off we reached Upper Lode Lock, we’d radioed ahead from the Yew Tree and the Lockie had said he’d dump the water in the lock for us, could we please wait till we saw the green light as currently the red light isn’t working. As you approach the lock cut you can see straight up to the weir and on the lock island there has been cut a tunnel through the trees for the Lockie to keep an eye out for you from his booth. We turned the bend and the light went green the lock gates already open ahead of us. For the first time, on the levels board we had two green lights flashing at us. The whole of the river now in the green, the first time we’ve seen this since the 29th of March, when we waited a touch too long at Stourport! 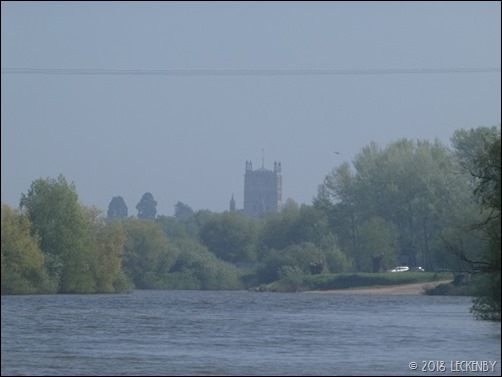 It feels somewhat wrong to be the only boat in such a huge lock at least it only had to rise around 3ft for us to join the next reach of the river. We carried on heading north resisting the temptation to turn onto the Avon to ‘I do like a good’ Tewkesbury, that treat will be soon. 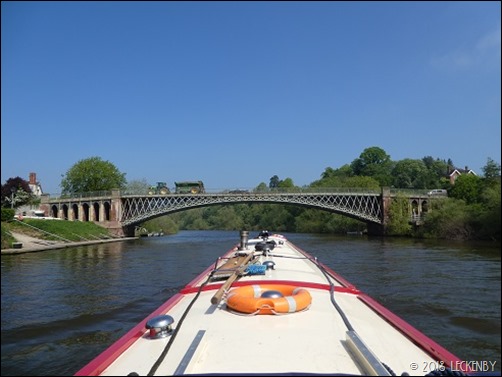 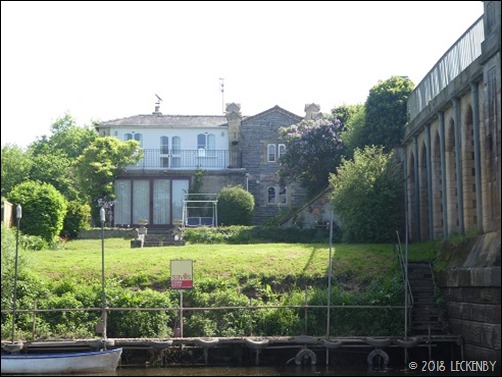 Just after the wonderful span of Mythe Bridge there is an interesting house for sale. It used to be the Toll House for the bridge and has a second property the Alum House, it also looks like it has a river mooring. 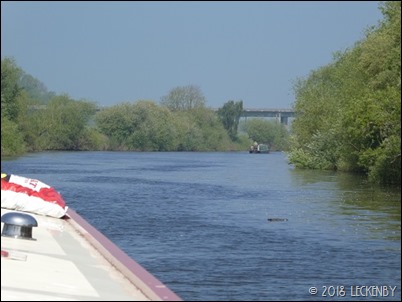 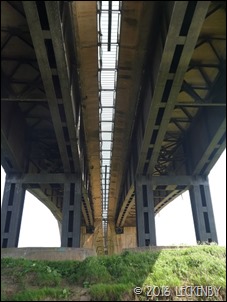 Every now and a again we got the glimpse of a boat up ahead, we were following someone. By the time we reached the M50 we reduced our revs a touch as we were catching them up. They seemed to move over a touch, so Mick took the opportunity before the next big bend and increased our revs and we sailed past giving them a wave. We’re not in a rush we just travel a touch faster. They gradually fell further behind us. 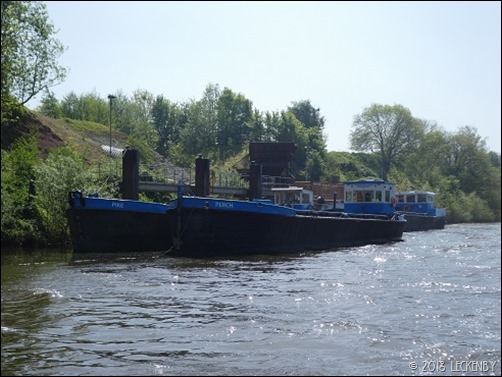 At the gravel wharf there were only three of the barges we’d seen on our way south, the forth we’d spotted in a dry dock at Gloucester. 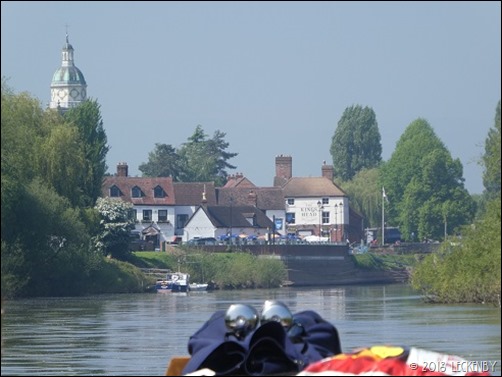 Around a few more bends and then we could see the Pepperpot at Upton. Plenty of space on the big steps and only one narrowboat on the pontoon, so we chose to pull in and join them. By the time we’d reached Upton we’d both removed our top layers as the day was now starting to warm up. 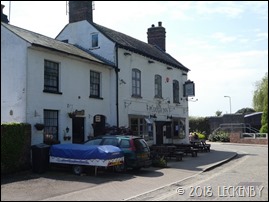 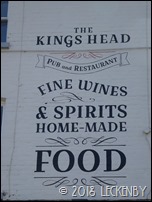 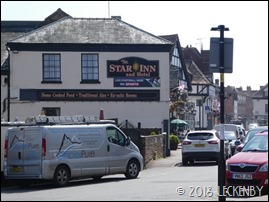 Upton was originally a busy port and had been the only river crossing for miles. Because of the number of boat hauliers arriving with the boats the town was filled with drinking establishments. In 1822 there were 17 Taverns and Coaching Inns and the population was 2,319. Today the number has dropped to 8 pubs but the population has stayed at a similar level 2,600. The wealth brought in by the port means there are large grand houses, in between the pubs, over looking the river. 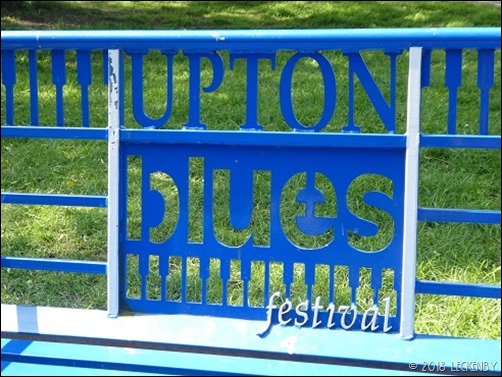 Over this last weekend there had been a Folk Festival and the town seems to fill it’s calendar with plenty of festivals year round, Blues, Jazz, Water, you name it they’ll make a festival out of it. All very popular, filling the town with visitors. 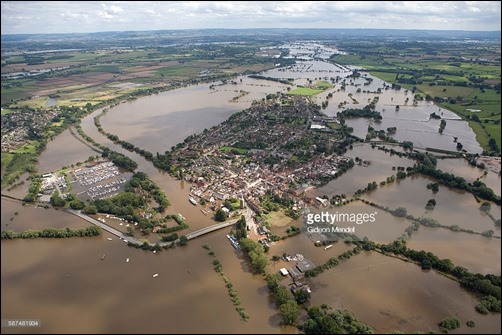 The floods that struck the area in 2007 left Upton more or less an island surrounded and partially engulfed by the Severn. Dubbed Britain’s most flooded town they had temporary flood barriers which would be erected when needed. But in 2007 a flash flood hit in July, the barriers kept at Kidderminster got held up on the motorway due to the rising waters. Now walls with glazed tops have been put in place along the water front and large gates can be closed to help protect the town. The A4104 is currently being raised to avoid being flooded so that the town can stay connected to the rest of the world when the waters rise again. 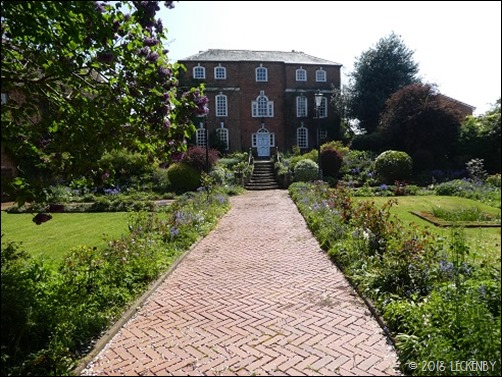 We walked along the river front past numerous pubs, people drinking and eating in the sunshine. Large houses sit proudly over looking the river some divided into flats, others still large houses, some grander than others. 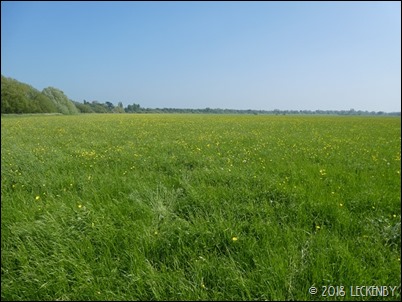 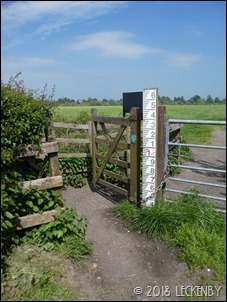 At the end of the For Sale properties lies Upton Ham an area of SSSI, it is almost 60 hectares of grass land currently covered in a haze of buttercups. Birds are nesting so you are encouraged to stick to the paths and walk around the edges to avoid disturbing them. This area floods and a levels board at a gate suggests how deep the water can get. 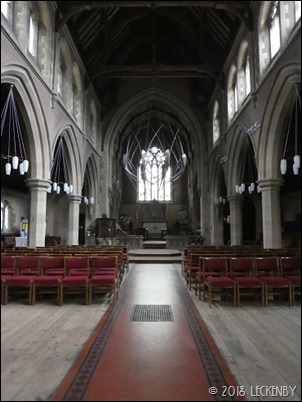 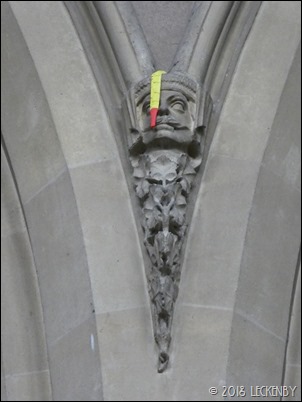 A look around the graveyard and on to The Parish Church of St Peter and St Paul. The door was open and a chap was practicing on the organ. Our look around was slightly curtailed as when the organist finished he disappeared through a door into the vestry, then we could hear the beep beep beep of an alarm being set. Not wanting to risk setting it off we hastily left, hoping the main door hadn’t been locked. It hadn’t so at least we wouldn’t have to explain ourselves to the Police. 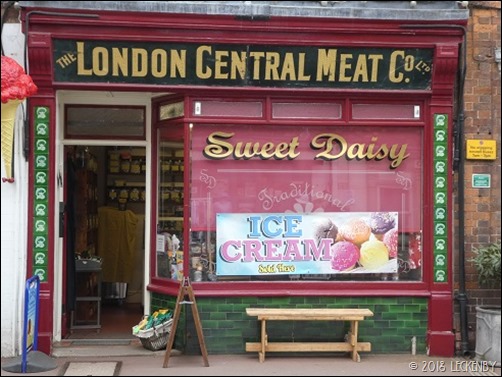 A walk up Old Street brought us even more pubs including The Little Upton Muggery which has it’s ceilings covered in mugs. It being a Tuesday we managed to resist all the hostelries but made up for it with some chilled medication from The London Central Meat Co, now a sweat shop. By now we wondered if the locals had to survive on beer when the floods hit as we’d seen no food shops, but just around the next corner was a Co-op. 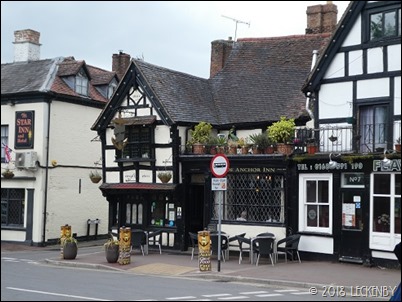 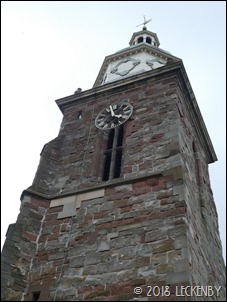 A look around the informative displays in the Tourist Information Centre at the Pepperpot. This is the oldest building in Upton, the main body of the tower thought to have been built in the 14th Century, at that time a full church with a spire and two chancels. During the Civil War much damage was done to the building as it stood at the important river crossing. It continued to deteriate until 1754 when a new nave was built. But by 1770 the  spire was considered to be unsafe so was dismantled, it was replaced by the wooden hexagonal lantern and lead cupola which later was clad in copper, giving the tower it’s pepperpot look. Overtime the church became too small for it’s congregation so a new Neo-Gothic church (the one we nearly got locked in) was built at the other end of Old Street to replace it in 1879. The old nave was dismantled in 1937 and the grounds made into a garden.