There seemed to be less noise last night from drinkers at the bar, maybe our new mooring helped, or maybe the clientele were just different and quieter. 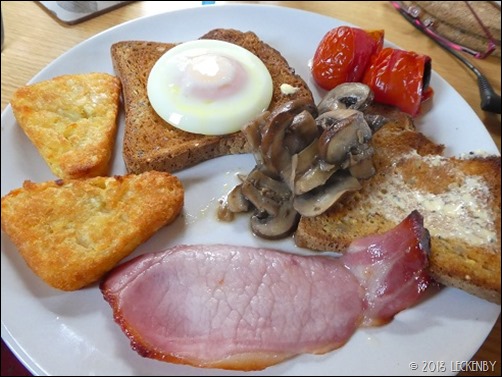 With no rush to go anywhere we had a leisurely cuppa in bed with our Saturday newspaper followed by a cooked breakfast, well there was some bacon that needed eating up and it would save us from having lunch! This was followed with a few chores, our yellow water tank fills up quicker than normal on moorings like this. We also spent some time getting summer out from under the bed. With the rising temperatures Mick was wanting a pair of shorts and I wanted more t-shirts. All my long sleeved tops and thick heavy jumpers are now all ready for the excess air to be sucked out of the vacuum bag before going back under the bed. We just need to do a big wash of all our padded trousers and re-waterproof them all before they get put away too.

Now we had the rest of day to explore Gloucester. There was a vague list of places to visit, but nothing concrete other than the Cathedral, which turned out to be just as well. 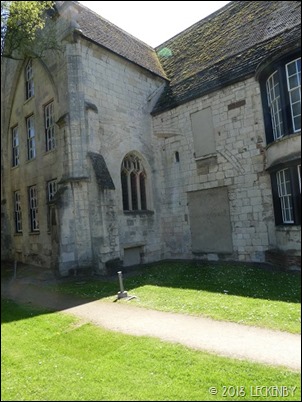 First we headed to Blackfriars. They are only open on Sundays and Mondays, but due to circumstances beyond their control it was closed today! Apparently it is one of the most complete surviving friaries of Dominican ‘black friars’ in England, later converted into a Tudor house and then a cloth factory. It has a fine scissor braced roof, apparently. Oh well there’d still be plenty more to see. 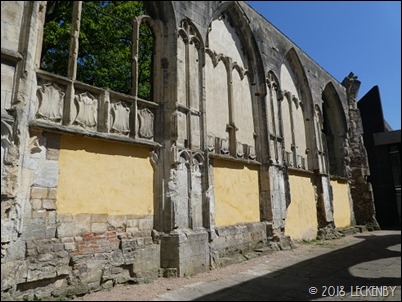 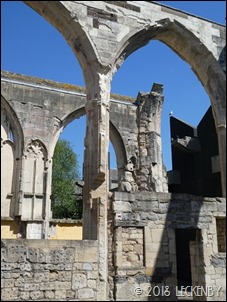 St Mary de Crypt church is currently closed, so we walked down to see if we could get to look round Greyfriars behind. We could, but mainly because Greyfriars has no doors. It was founded around 1231 for Franciscan Friars by Thomas of Berkeley, his family continued to support the monastery through the centuries helping to fund a major rebuild of the church in 1519. Henry VIIIs dissolution of the monasteries brought about it’s closure  in 1538 and it was converted into workshops and housing. The shell is all that remains now, butting up to far more modern buildings. 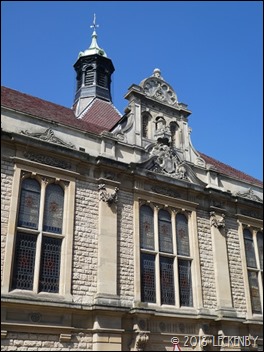 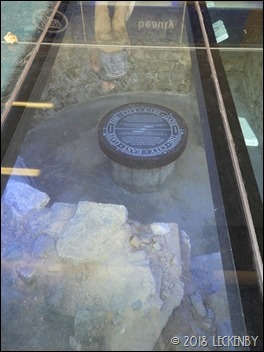 Next Gloucester Museum was very closed. Were we foolish thinking we’d be able to be tourists on a Sunday? Maybe we were. At least we managed to look down through the glass at the Roman remains of the East Gate and Horse Pool that were left when Boots was built in the late 1970’s.

So we decided to just have a wander around knowing that the Cathedral would be open as it should be their busiest day of the week. 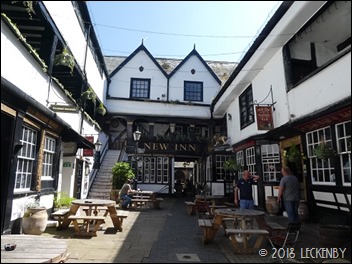 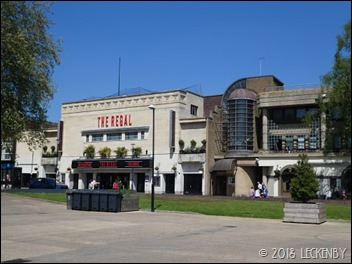 The Regal Cinema is now a Wetherspoons, the exterior having a 1930’s feel, but looking in through the door it looked pretty much like any other pub. The New Inn on the other hand was far from New. It was originally built as a pilgrims inn for visitors to the shrine of King Edward II. Rebuilt in 1455 it was a popular holiday inn and in the 16th C plays were performed in the courtyard and in Tudor times it had the city’s first tennis court. It was in 1553 that Lady Jane Grey was proclaimed Queen from the balcony at the New Inn, she was only Queen for nine days before she was deposed by Mary. It claims to be the finest example of a Medieval Galleried Inn in Britain. We had a look at the courtyard but it was too early for a drink. 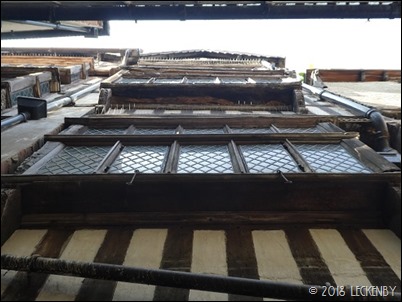 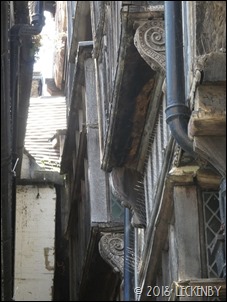 Walking down Westgate Street I noticed mosaics on the floor every now and then, they seemed to mark the entrance to snickets. The first one was fairly dark, there was a blue plaque on the wall so we ventured in. The narrow alleyway was dark mostly because a 16th C Merchants House steps out with each of it’s four floors above your head. It is the largest urban timber framed building in Britain. My photos don’t do it justice, but as you’ll understand it wasn’t very easy to get a photo at a good angle, no stepping back.

A quick look around The Tailor of Gloucester shop, it’s more of a gift shop than anything else. I do wonder what happened to the large models of the cat and mice I saw being made years ago. 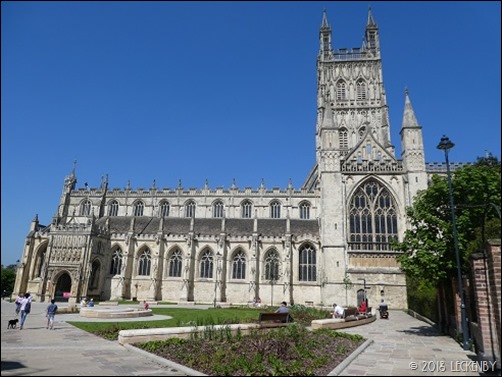 The bells of Gloucester Cathedral were ringing out, calling us in, so we obliged. 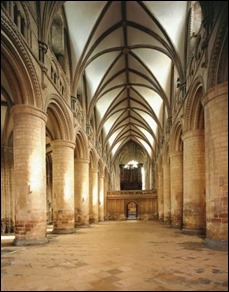 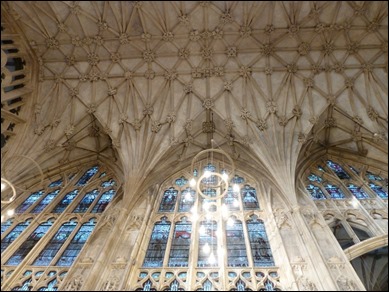 Construction started in 1089 with the foundation stone being laid, its huge Romanesque piers dominate as you enter. The South Transept is the earliest surviving example of English Perpendicular architecture making the building reach for the sky. The fine fan vaulted ceiling in the cloisters dates from 1351 and is beautiful. 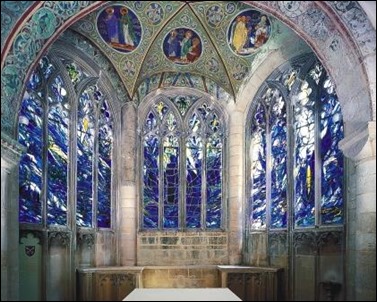 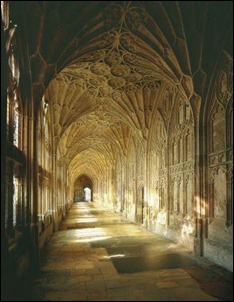 Many more modern features have been added, Pre-Raphaelite windows, an elaborately painted chapel (which I now can’t find any information about), a new stained glass window in the South Ambulatory Chapel by Thomas Denny which depicts the story of Thomas the whole window is of blue and floods the chapel accordingly. 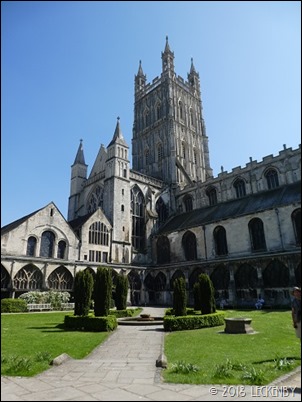 During our visit the organ started up followed by the choir. Wonderful sounds resonating through the building, so atmospheric. Outside the bells still peeled. We sat in the secret garden of the cloisters for a rest and to listen to the bells which soon ended perfectly. There seemed to be a major photo opportunity going on in front of the tower, just about everybody who came into the garden got their camera out. Yes it’s a good view, but this seemed to be more than that. Reading the nearby sign it all became obvious. The cloisters and garden were used in the Harry Potter films as parts of Hogwarts. We have all the films on DVD so maybe we’ll now have to watch them all to spot the Cathedral. 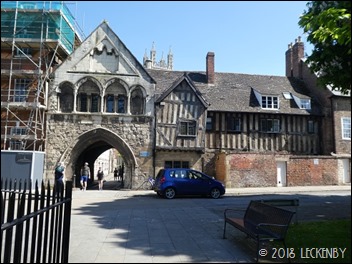 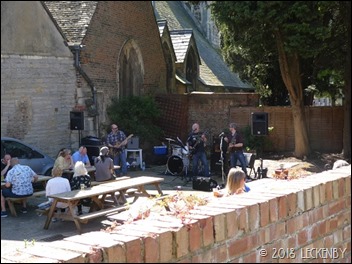 As we left the bells called people in to evensong and bang on 3pm as we stepped outside music struck up. Not quite the style we were expecting, less hymn, more Rolling Stones. It turned out that a band were playing in the beer garden of The Dick Whittington pub a short distance away. 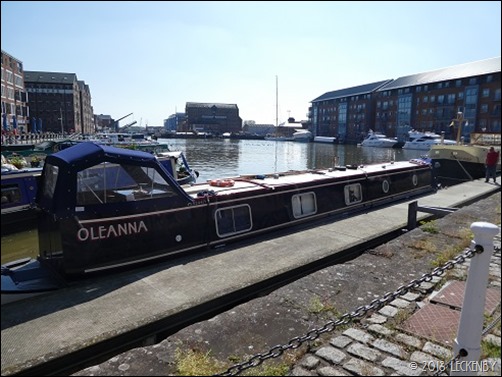 1 thought on “All Closed Apart From God And The Pubs. 6th May”