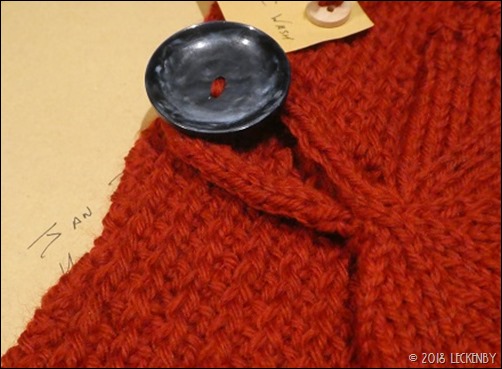 With the first sale from my Etsy shop all packaged up ready to go, I headed off into town to find a Post Office as it’ll be a few days before we are near another branch. Town was buzzing in the sunshine, the Town Crier was shouting about all that you could do today and a Polish market was setting up and it looked like there was to be music later on. 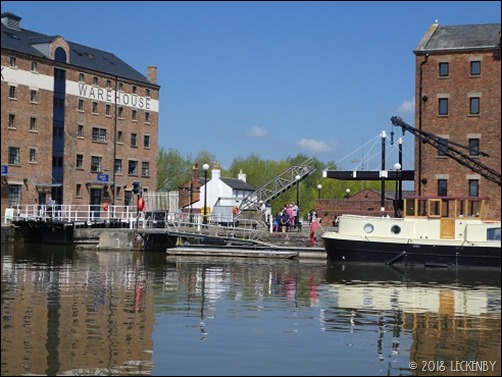 Back at Oleanna Mick was listening in to channel 74 on the VHF, plenty of boats coming and going through Llanthony Lift Bridge and the Lock. We could hear boats approaching Upper Parting on the Severn, the lock would be made ready for them, all large craft had to call in again as they reached the road bridges so that the lift bridge over the lock could be raised. Day boats would radio ahead of them coming out from the arm informing the keepers that they were doing training before they’d then request for the bridge to be lifted. One such call was from a chap, ‘This is Badger, we’ll be coming out from the arm to do some training before requesting the bridge, the training may take some time as it’s a group of mature women’! EXCUSE ME!!!! Mick and I looked at each other, maybe the training would take some time because he was likely to end up being a pig over board! 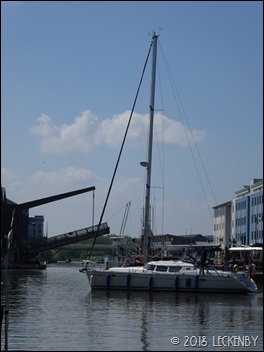 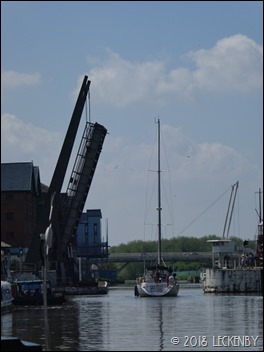 On one call to Llanthony Bridge a chap was wanting to book through at midday, he then asked about the other bridges ahead. Would the Bridge Keeper inform them or should the Captain. The reply was that some of the bridges needed 24hr notice! This had to be a taller ship than normal. The Captain was not aware of this, he enquired if any other vessels were booked to go through today, one was at 1pm, but the Bridge Keeper only knew about one bridge. The Captain went to have a chat with the keeper off air to see if anything could be sorted. Their boat appeared just before midday from the Barge Arm and sure enough they had a tall mast. They trod water waiting for Llanthony Bridge to raise and once through their mast mixed with others up ahead. We kept an eye out for the next bridge lifting, but didn’t see any movement, the number of masts did decrease at some point during the day, so they got through somehow! 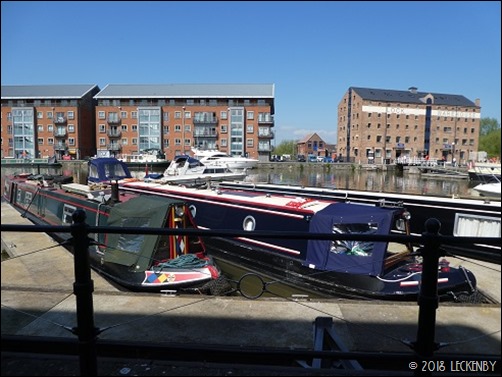 Just as we were about to have some lunch NB Mallard requested a bridge lift. They were moored on the side, not a finger pontoon. We quickly got ourselves sorted and untied and as soon as they’d cleared the water behind us we reversed out, winded and reversed into their space. Here we could have a view from both sides of the boat and be slightly further away from the bars which were noisy till gone midnight last night. Our new neighbours Dutch Barge Bellus Diem came out for a chat before putting chairs on their roof to sit in the sun for the afternoon. 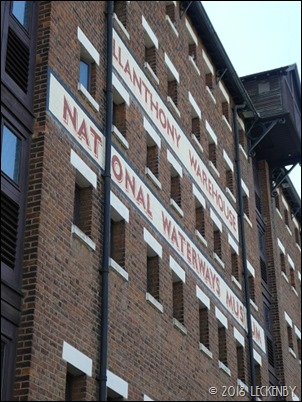 Not being sun worshippers we headed off to the National Waterways Museum at Llanthony Warehouse. Today the museum was reopening after some work had been done, not that they were mentioning this anywhere. The ladies at the desk swapped our tickets from Ellesmere Port for annual passes and informed us of boat trips and that the Steam Dredger would shortly be in action. We refrained from the boat trip but hung around to see the dredger. 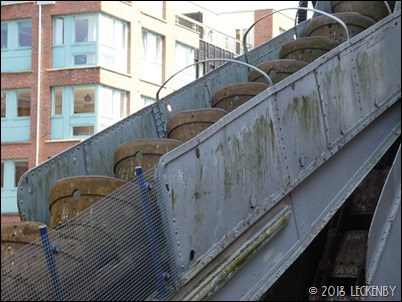 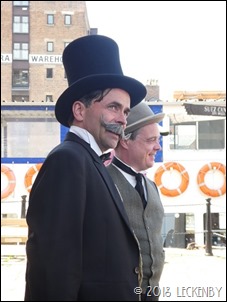 There were lots of people dressed up in costume, dockers, bosses, foremen, ladies in narrowboat bonnets. Plenty of rats were being hit with ropes, stopping them from running up peoples shorts and lifting sacks of wadding look very hard work in deed! They all seemed to be having a whale of a time, lots of banter. Outside the steam was getting up on the Dredger, fifteen minutes or so till they’d have enough to get her going. Then a bit longer, then a bit longer still. 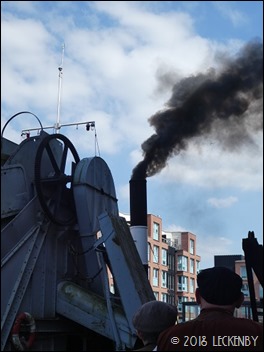 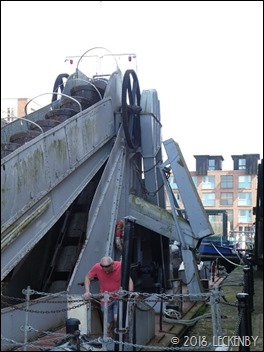 Built in Holland in 1925, SND No 4 was used at Sharpness New Docks to help keep the build up of silt down. With her bucket ladder she can dredge to just about any depth and was used on the canal and docks from 1926 to 1981. Her boiler was changed from being coal fired to diesel in 1963 and when she retired had a refurbishment in 1988. Since then she has sunk once when the canal had a breach in 1990, but was raised again. 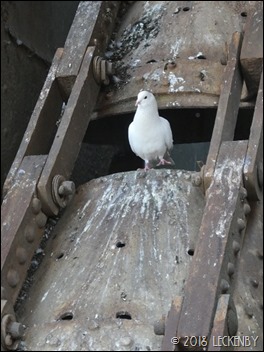 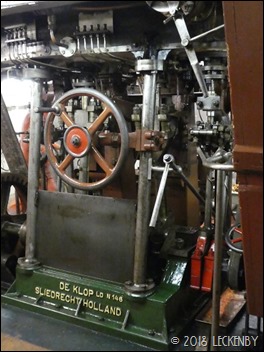 She hadn’t been fired up for sometime and plenty of pigeons had moved in, but they were about to get a very big shock. A crowd had gathered and the big wigs of the museum stood waiting and willing her to fire up and get the ladder moving, you could sense the will power amongst the onlookers. Everyone was allowed down below decks to look at the engine and the grease smeared operators, some very 21st Century expletives coming from the lady down there as she turned the whatsit and twisted the thingumyjig and pulled the lever and still nothing. 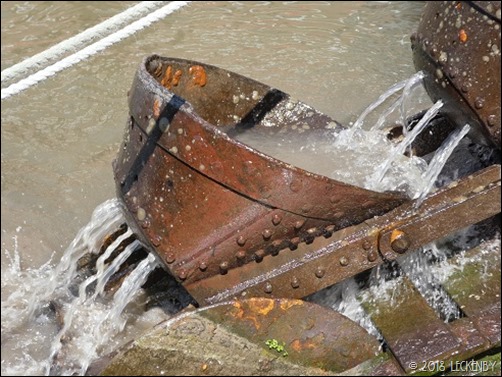 Back on shore we stood willing even harder, hoping that the rust hadn’t got the better of her. Then creaking and grinding and the buckets started to move, backwards. This was soon rectified and the ladder started to move it’s buckets round with an incredible noise (video link)The buckets once they’d gouged out the silt wound up the ladder, holes in the bottoms helped drain the water out leaving only sediment which passed up the ladder to the top where they then pivoted, depositing the solids into a shoot that would gradually load a barge to the side. Today there were no dredgings so the shoot was folded out of the way. What an amazing piece of kit, glad we got to see and HEAR it in action. 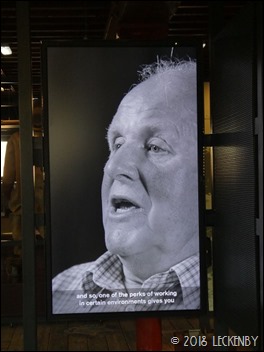 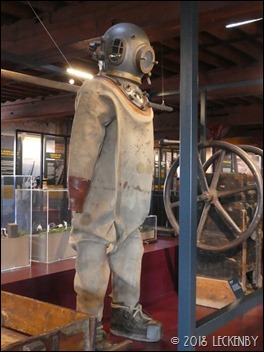 Ellesmere Port has a far bigger collection of all sorts of stuff, here most things relate to the G&S canal. A few new interactive displays were good, loading a barge with bundles up to certain weights, if you got too much in the hold the boat would sink! Talking heads of four chaps who worked the boats appear on panels telling stories of their working days, long shifts, few days off, but anything they wanted all duty free from the boats coming in at Sharpness. Very interesting. 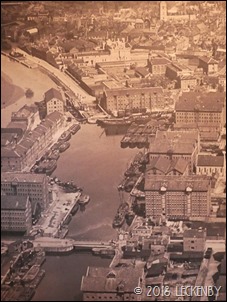 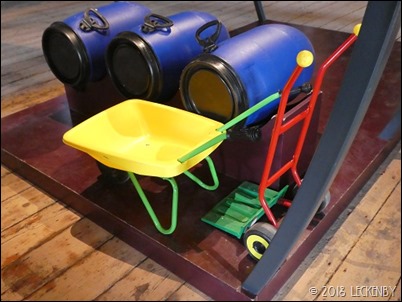 The museum was good, especially the dredger, but if you have a choice Ellesmere Port has far more to see and do, we spent a couple of days there where as an afternoon did us here. We rounded off the day with some chilled medication sat in the sun outside before returning to Oleanna to watch the Tour De Yorkshire ending in Scarborough. We spotted a few people we knew, the SJT, my first flat and the late night drinking dive nightclub Bacchus, twice. 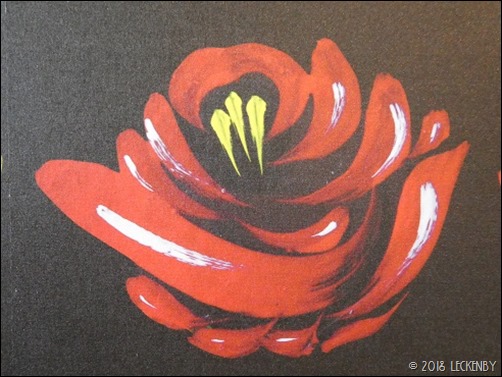 3 thoughts on “Dredging 5th May”