Splatt Swing Bridge to Gloucester Pontoon Moorings
On our cruise back northwards on the river we want to stop at various places to have a look round, so we’ve worked out an itinerary hopefully with a bit of time to spare should we be held up by rising water levels. With the weather looking good for the next few days though any rise from the downpour the other night will hopefully disappear quite quickly.
Today it was time to move back to Gloucester, a shame as there is a lot happening in Frampton over the weekend.
The Scarecrow Festival starts tomorrow and runs for a week. I’d already spotted a couple of entrants yesterday. 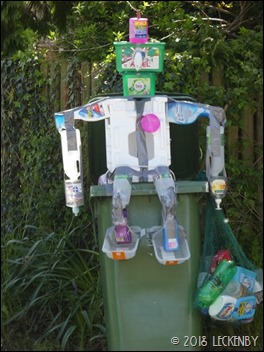 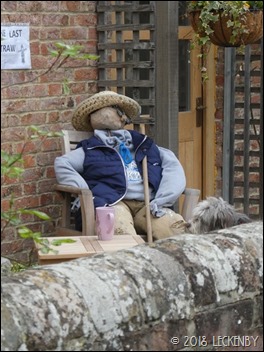 Then on Sunday The Green is being taken over for the World El-Ver Eating Competition. In days gone by you’d have been challenged to a ‘pint of elvers’ eating competition, a local delicacy not for the faint hearted. Baby eels were fished from the Severn during March and April, blanched in boiling water, fried in bacon fat and served with a poached egg. The decreasing numbers of Elvers brought an end to the village tradition. But in recent years it has been resurrected using sustainable El-Vers from Spain, these have been made using reconstituted fish. The young lady who served us in The Three Horseshoes last night is the current champion. I’m not sure if it is the quantity you can eat within a set time or the quickest to eat a pint of them. Along with the El-Vers there is a kids competition for eating spaghetti, barbeques, classic cars, a tug of war, plenty to keep the village busy on a sunny Sunday.
To round the weekend off on Monday there is an open garden day. A big shame not to be able to nosy around the big houses gardens, but we haven’t looked round Gloucester properly yet. 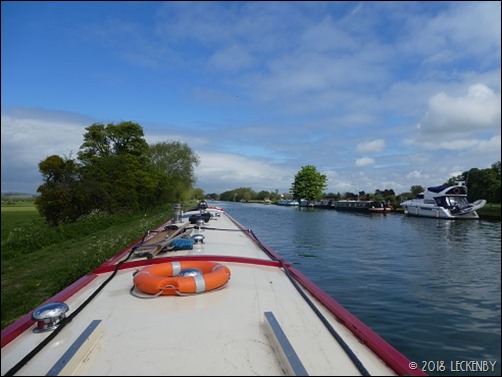 We delayed pushing off this morning as we’d had a C&RT notice about a tall ship on the canal today. Kaskelot would have right of way at bridges, Sainsburys mooring would be suspended until it had passed and we should take care when mooring as they were likely to create a lot of wash. They were leaving Gloucester Dry Dock at 8am. When we arrived in Gloucester Kaskelot was in one of the dry docks. Built in 1948 in Denmark, she is a three-masted barque and one of the last remaining wooden ships in commission. She has undergone major restoration in the last few years and had been having her annual check up in Gloucester before heading to Falmouth and further south for the summer. She has been used in many TV programmes and films including, Return to Treasure Island, Poldark, The Three Musketeers, and Shackleton. Our mooring had a long straight ahead of us, so hopefully we’d have a good vantage point.
Listening into the VHF radio there was little to hear for far longer than we’d expected, other than one of the charity boats practicing their man overboard procedure, we hoped they knew what was coming their way! Mick then decided to look at the Marine Traffic website. They were a few bridges away still. As they got closer we went outside to wait. A cruiser and narrowboat were heading straight for them, we could hear conversations, they would be let through then pull over to give right of way to Kaskelot. 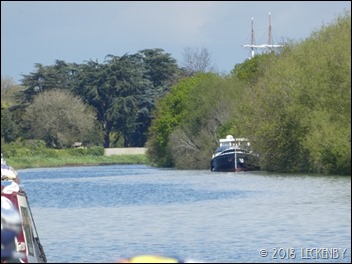 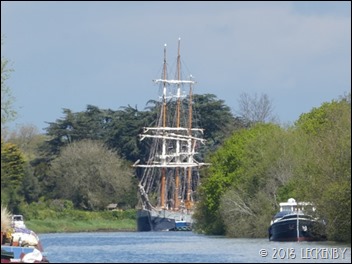 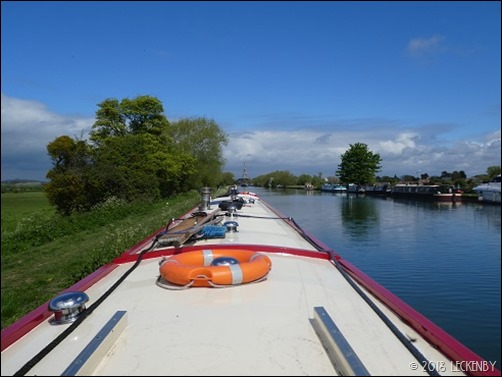 The first sighting was of the masts passing the flour mill just before the next bridge. It then disappeared for a couple of minutes before the masts came back into view, shortly followed by the bow turning the bend onto the long straight towards us. 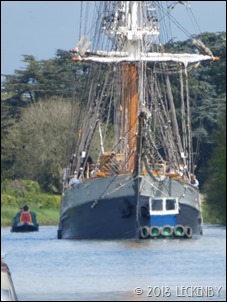 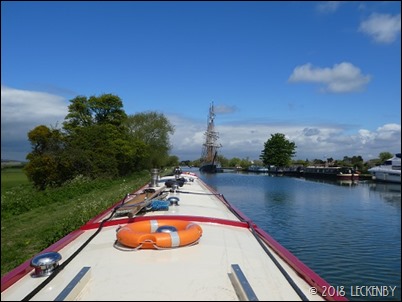 A tug was on it’s bow occasionally going to port or starboard helping to keep it centre channel, a rib tied to the stern followed along behind. Then off the starboard stern we could see this tiny little narrowboat, a day boat from Gloucester sitting in the slip stream (for want of a better term) of such a big ship. 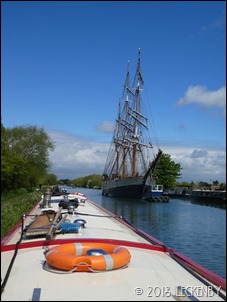 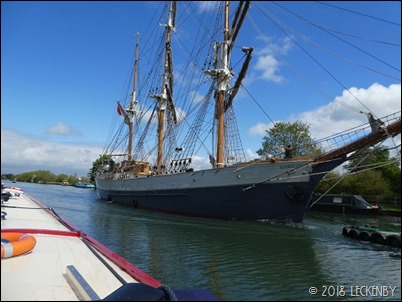 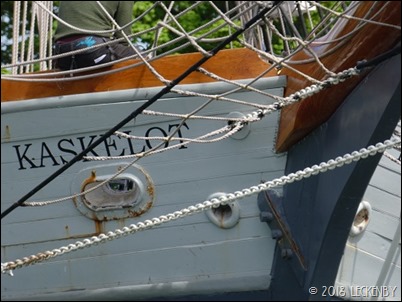 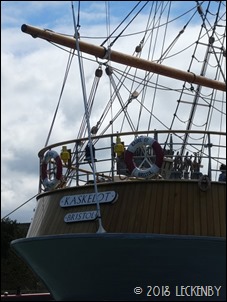 What a sight! I took far too many photos, but missed getting one with both Kaskelot and Oleanna in the same frame. Never mind it was better to actually watch than concentrate on photos. 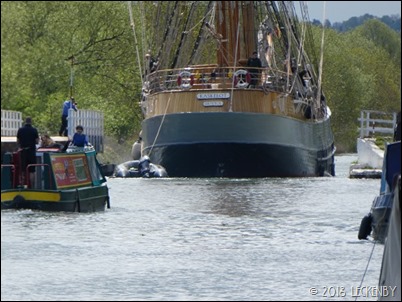 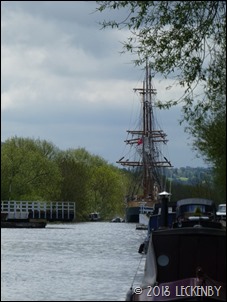 Splatt Bridge was opened up ahead for them and they cruised through without having to wait, only a few meters to spare as they went through.
All the excitement done we could head on our way, retracing our steps back to Gloucester.
At Saul Junction we came across other craft speeding along, trying to overtake us, only to wizz round to follow another boat back to the bridge. We’d had 153ft of tall ship go past only an hour earlier, here we had 1ft of model cruiser zipping along on the plane! Luckily there was also a sailing boat, warship and a lifeboat all at hand should things get a bit tricksy. 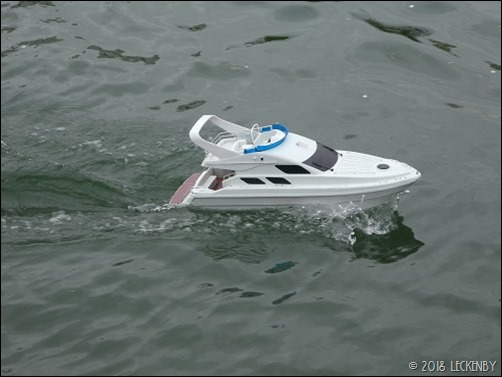 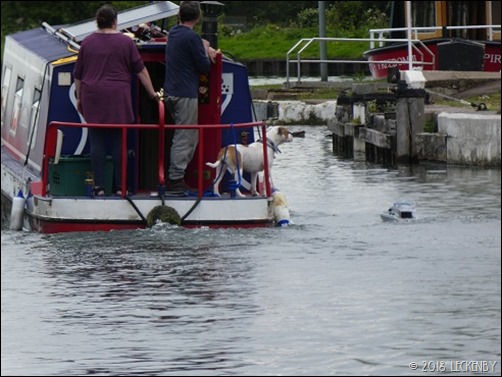 Gradually we made our way back through and under bridges to Gloucester. 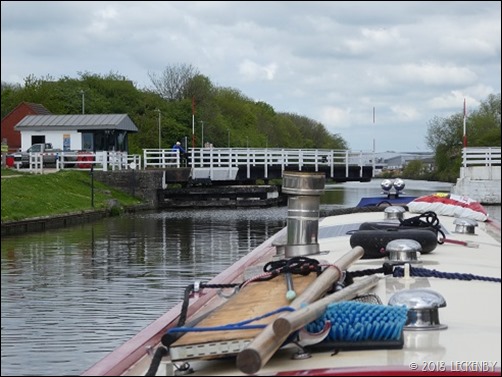 We’d planned to pull in at Sainsburys to do a big shop as stocks were now quite depleted, but realised that maybe finding a mooring for a bank holiday weekend would be a better idea. The pontoon just before Llanthony Bridge was full, well there were git gaps! So we passed under the bridge and pulled in on a finger mooring. There were a few spaces left but all were in between other boats, so not much of a view for us tonight.