Once Tilly had come and gone a few times this morning we were allowed to go off and have an explore of Sharpness.

We followed the Old Arm down to the Old Tidal Basin and lock. Much of the Old Arm is now used for mooring and what was the lock down into the tidal basin has boats moored there too, the old lock gates still in position. Huge rings fixed by the wall are now far too big to moor a 35ft cruiser to, but are just a sign of the size of boats that once used to use the arm.

The original dock opened along with the canal in 1827. It was separated from the Severn by a lock gate and when open to the river the level in the dock varied depending on the tide. A lock brought ships up onto the canal and through the years was expanded to be used by the ever growing sized ships. By 1874 ships had out grown what could be accommodated here so a new dock was built to the South. A large lock and tidal basin meant that the docks above could be at the same level as the canal. Should bigger vessels want to dock the tidal basin could also be used as an extension to the lock.

The old lock and dock had only served to get the ships from the river and on their way to Gloucester, but now the constant level encouraged wharfs and warehouses to be built in Sharpness. With the arrival of the railway and swing bridges across the canal the dock became a port in it’s own right.

In 1908 the old lock and basin were abandoned the old dock was used for boat repairs and by 1990 the gates were fully removed and replaced by a weir enabling the whole of the basin to be at the same height as the canal. Above what had been the River gate is the old Harbour Masters House, now used by the Severn Area Rescue Association. A Land Rover with Lifeboat written on it’s bonnet and a slipway a distance away suggests that there is a lifeboat stored away next to the house.

The Harbour Masters House sits in a very exposed position, with views both up and down the Severn. Both Severn Road Bridges can be seen in the distance and we might even have spotted where Mick’s sister Kath once lived in Severn Beach. As soon as we walked out of the shelter of the house we had to cling onto our hats and the force of the wind was so strong it resonated the railings along the sea wall. It was very eerie, I tried to record the sound on my camera  but the wind just upstaged it. From our position today and with the tide low we could see the wrecks of both the tankers that had collided with the railway bridge. We could also see that maybe a few more beached vessels were needed to help with bank erosion.

We followed the track over to the newer docks, stopping to have a closer look at the wind turbine on the head land. They really are massive things, can you spot Mick at the base? Apparently it was really quite quiet stood next to the turbine as it swept round creating its 500 KW.

From here we walked down to Dock Road where we followed signs for a shop. A few houses with what had been a Post Office, we decided to go inside and see if they had any potatoes. The lady behind the counter told us that when they lost the Post Office their income had halved, it was a good job that they had a very big paper round which helped keep them going. The only potatoes she had were tinned, not what we were after so we came out with a midweek newspaper instead.

A string of houses look down to the dock and the old rail tracks, now mostly overgrown. The odd bit of old rolling stock sits idle, maybe waiting some TLC from some local enthusiasts. There were plenty of boats out on hard standing and more in the water. Planet the old Light Ship that used to be at Liverpool Docks has made it’s way here after being removed for not having kept up with it’s mooring fees (according to The Liverpool Echo). It is hemmed in by other large ships, one with a bladeless helicopter on it’s roof. A tall ship stands at the end looking in much better order. 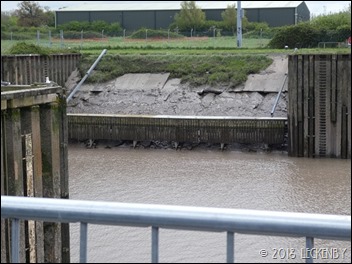 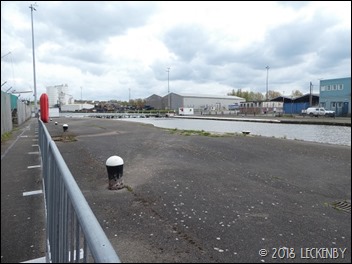 We followed a track round to some gates near to the lock from the river. A big sign said that when ships were on the move then the gates may be locked, at other times we could enter. Not locked, so we followed the designated route towards the lock and Tidal basin. The basin is huge and looking down we could see where a small pontoon has been built to accommodate smaller boats, such as narrowboats that navigate the 18 or so miles to the mouth of the River Avon at Avonmouth and Portishead before heading up to Bristol. To do this you need to have a pilot with you. NB Chrysalis was booked to do the crossing at the end of last week but we’d wondered if it was too windy, but there was no sign of them in the docks, so they must have gone. 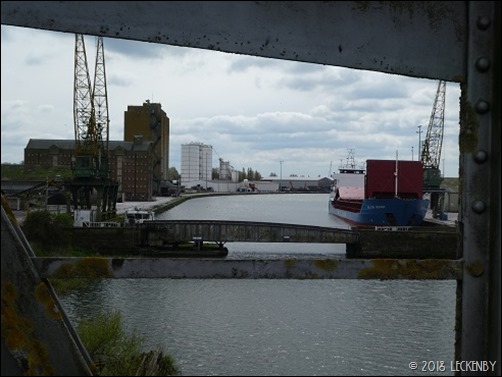 We crossed the lock top gates and walked up around the docks into Newtown, everywhere felt a bit like Keadby on the River Trent, desolate, accompanied by the loud crashing noises of scrap metal being moved around down by the docks. Our route brought us down to Sharpness High Level Swing Bridge where we could look down to the Lower Level Bridge, a crane storage site and have a view into the docks. Only one ship was in, Wilson Gadansk, with it’s cover wound back. It was strange to think Oleanna our little narrowboat was on the same pound of water not far away. 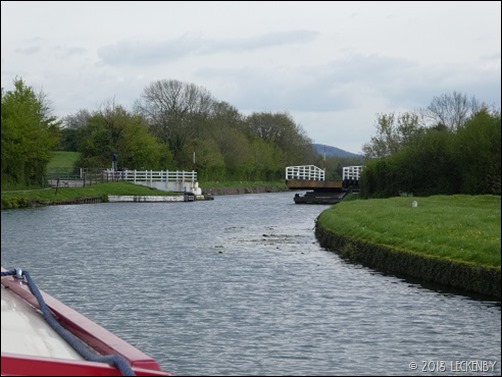 The weather forecast had been for a horrible day, but it had turned out considerably better than expected so we decided to move back along the canal to Patch Bridge. The approach to the first of the Purton Bridges is around a bend, but just by the weir there is a camera giving the Bridge Keeper a better view along the canal, the red light flashed as it came into view and the bridges opened up in turn for us. Not far to go  before we pulled in, mooring up with a better view than we’ve had for a while, just a touch short of Patch Bridge. Tilly had a new rule added to her list, ‘NO bringing rare species of friends home!’ 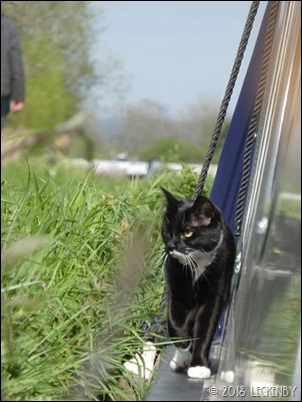 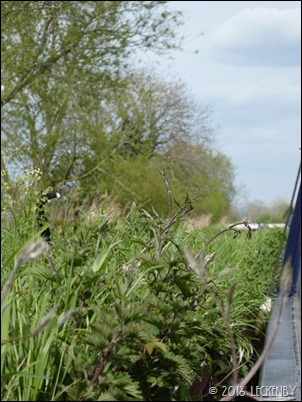