Whilst we had breakfast Tilly was allowed out, when she returned would dictate what we did for the day. The water gauge was reading just under a quarter full so we decided that when she returned we would carry on towards Sharpness stopping for water at an available water point. It was cold and very windy, so I got my padded waterproof trousers out again ready for the off.

I came home knowing that they wanted to change the outside. First I tried getting in through one of the windows, but my calculations suggested that it would be a tighter fit than the bathroom door (the one that I can’t get under). She called for me from the back so I stopped my calculations and just used the normal way in. Then I remembered something that I’d meant to do before leaving this outside. I could just see it over the top of the green if I did my meerkat sit. Just in view, it wouldn’t take me long, I’d be back in a jiffy, no need to ask for the back door to be opened, I’d jump out through the side.

Except that didn’t work! She made a loud funny noise as my head hit the solid view of the outside. In slow motion I slid down to the floor where I quickly gathered myself and rushed to the sofa. My head hurt! How come the outside had turned so hard all of a sudden!

Tilly seemed to be nursing a headache for the rest of the morning. She once tried this on Lillian and to stop her from repeating the incident we put a post it note on the Perspex infill for the side hatch, at least that one had an amount of give to it. This opening is only allowed to be used in one direction and that is to come in from the cat walk, she knows this and that she can’t just walk through it. 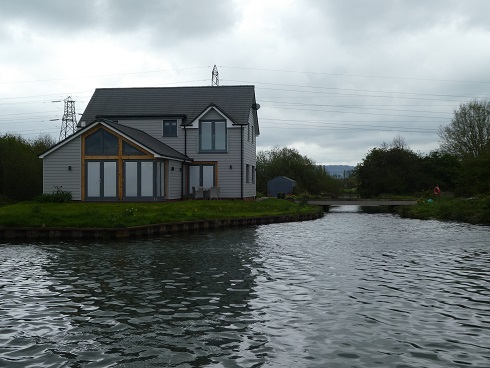 We pushed off once we knew there was no lasting damage done, both to Tilly and Oleanna. Through Splatt Swing Bridge, on past the Cambridge Arm feeder where a new build sits at the junction. After the next two bridges we pulled in for water. Just before the bridge there is The Black Barn, a cafe, gift shop and they sell red diesel. The Slimbridge Wetland Centre is just  a short distance from here, we may stop and have a good look round on our way back, also have a top up of diesel.

At Purton there are two swing bridges in quick succession, both operated by the keeper at the Lower Bridge. Cameras mounted high up catch you arriving. As you pass through the Upper Bridge the Lower one starts to open.

The Keepers Cottage at the Upper Bridge has just been sold. Hunting round I managed to find it’s details. £250,000 doesn’t get you much really, in need of a lot of modernisation with a Grade 2 listed frontage and a toilet in your garden that is used by C&RT. 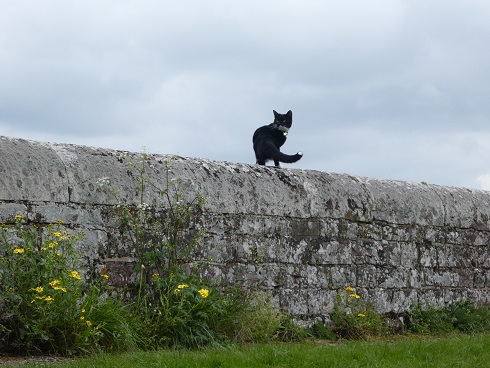 Around the next bend is a long straight, which looks like it is very close to the Severn on the maps. We hoped for a mooring with a better view this time, only to be thwarted by high trees and undergrowth blocking virtually all the view. No break came until we’d passed the old Severn Railway Bridge. Here a wall would shelter us from the prevailing wind but also block our view, another trampoline required. Almost at the end we winded and pulled up. Tilly used the back doors to go out this time, but wasn’t too impressed at what greeted her. A wall! A piddly little wall, no where near as good at the one in Marple. Well until you look over the other side, then it is really quite high. Calculations proved too complicated to risk ascending in such blowy conditions today, it was blowing right up my bum!! 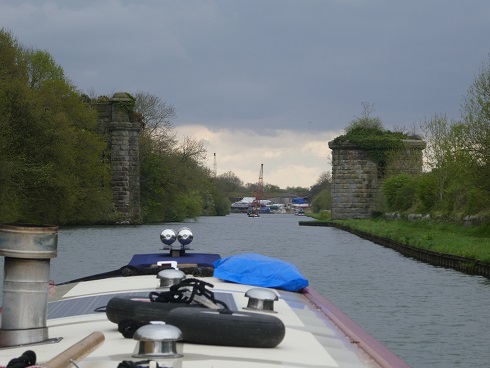 In the afternoon we wrapped up warm again. Walking up the canal you pass what was the Severn Railway Bridge. A typical start to any bridge sits on one side of the canal and a round stone support on the other. This support was once the pivot point for a rail swing bridge and it housed the steam engine that opened it to enable tall ships to pass along the ship canal. But why is there no other signs of the bridge crossing the river? The bridge was used to carry coal across to Sharpness docks for export. Opened in 1879, it was 3/4 of a mile long with 21 spans supported by cast iron columns sunk into the river bed.

25th October 1960 disaster struck when in thick fog and on a strong tide two tanker barges missed the entrance to Sharpness Dock and were carried further upstream to the bridge. Wastdale H collided with the 17th column rupturing her petrol tank, Arkendale H was forced by the power of the tide on top of her. Two bridge spans collapsed rupturing a gas main and electric cable that passed along the bridge. All this led to a massive explosion. Three crew members survived and a train had missed the explosion by seven minutes. It was not economically viable to rebuild the bridge so the remainder was demolished, at low tide you can make out the wrecks of the tankers.

On the shoreline are numerous other wrecks, known as the Purton Hulks. These ships were however beached with the intention of strengthening the canal bank from erosion form the river. It started in 1909 with the beaching of a small fleet of semi-redundant timber lighters, more followed through the years up into the 70’s and now The Purton Ships Graveyard has 81 vessels on the shoreline. Each vessel was taken out from Sharpness Dock on a high Spring tide, towed towards the shore then released so that it would charge up the bank. Holes were then knocked through  the hull so that on subsequent tides the holds would fill with silt helping to reinforce the bank. 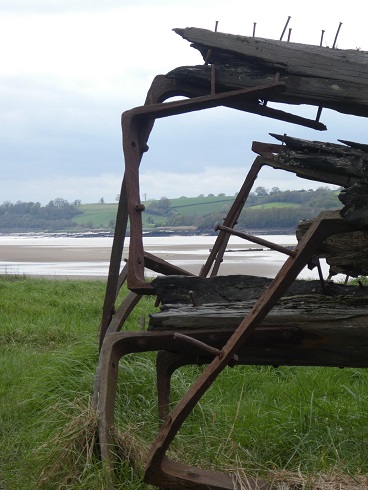 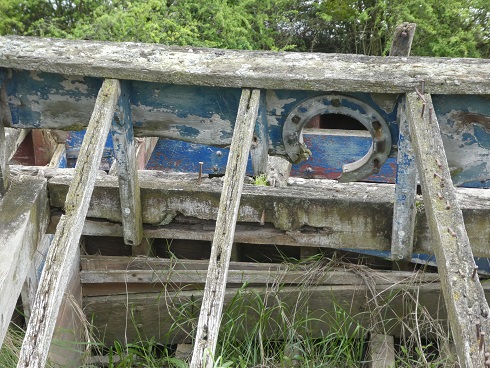 The vessels are of various construction wood, steel and concrete. The later two materials withstanding the elements better than the wooden hulls. Archaeological research has been done to identify each boat and plaques have been mounted wherever a hull lies, listing it’s name, size and dates. Some are easily identifiable, others have very little left to show.

A fascinating place to visit especially on a moody windy day. For far more information click on the link .

3 thoughts on “Splatt Cat Bridge And The Hulks. 29th April”