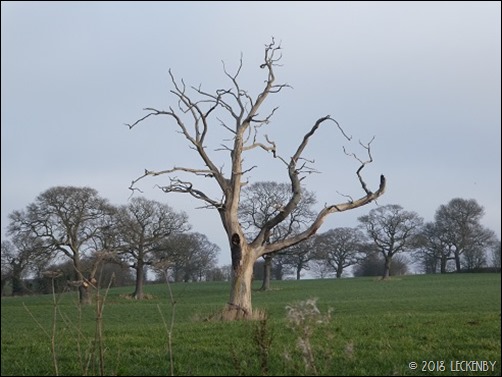 On Thursday we made our way back towards Grindley Brook, where we thought it would be a good place to be picked up for a hire car. As we were about to untie a boat rounded the bend in front of us, this was to be the one and only boat moving today other than us. One of the chaps on board asked if we were about to push off and could they possibly borrow a windlass. He had just sold his boat and butty, but had left his windlass on the butty which was now about a mile behind and to be able to wind the boat they needed to be able to operate the lift bridge a short distance behind us. Mick routed through the lockers and found a spare that we had found sometime ago left at a lock. The chap said he’d find us to return it, but if this didn’t happen we wouldn’t miss this windlass. 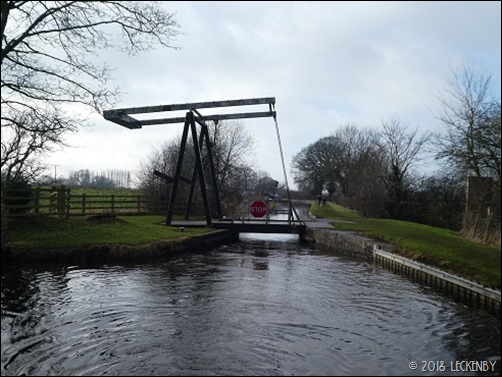 So we pushed off to cover the two and a half miles to Grindley Brook, a greyer day than on Wednesday. We soon passed the newly sold butty awaiting it’s tow into a new life with new owners. Ahead were the two Hassell’s lift bridges. One of these will be closing for maintenance in ten days, I hope they don’t make it hard to work as at the moment it is possibly the easiest on the hole of the Llangollen canal to wind up and down. Then as we passed the Whitchurch arm we could see NB Mountbatten’s butty moored up, this looks like it will be the coal boats base for a while as locks and bridges close over the next two months. 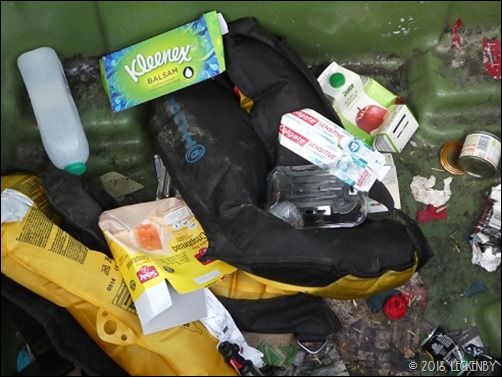 Once the lift bridge had been wound up and back down again we covered the short distance to the water point where we filled one tank and emptied the yellow water before reversing back to the Visitor Mooring and tying up. Our windlass was returned as we walked down to the bins and then the petrol station shop for some plastic bread. It’s amazing what people put in the recycling bins. 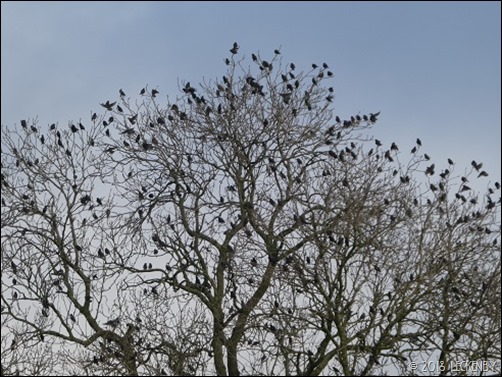 Back on board it was time to try to sort Enterprise out. A few days ago we’d been invited to head to Scarborough for a sherbet (or several) to remember our friend Mick Hughes along with our Scarborough friends. So we’d booked a car from Enterprise as this worked out to be cheaper than the train for the two of us. To cut quite a long story short, the company that advertises that they will pick you up and drop you off didn’t seem too cover Grindley Brook, even thought their website suggested they did. Mick had been passed from one office to another but as we’d prepaid (making it cheaper) they couldn’t just transfer the booking! Rebooking the price changed first in our favour but as he clicked confirming the booking it jumped up in price. After checking that he would be able to get a pick up, he was then told by the next chap that we were too far away. Mick did his best not to have a Geraghty strop with the chap. It was getting to the point where I was willing to have  noisy dramatic weeping fit in the background about not being able to go to our dear dear friends funeral, but luckily my acting skills (not the best) were not required and in the end they agreed on a pickup! 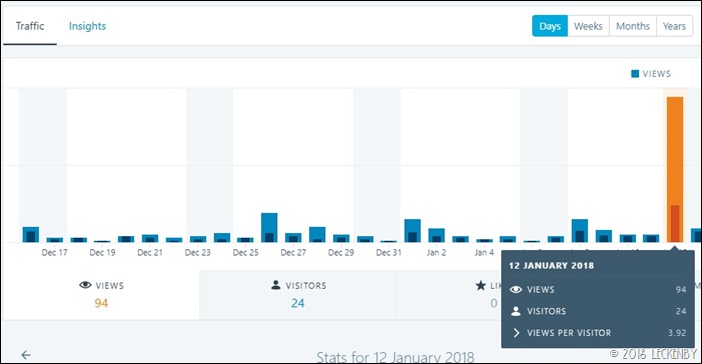 Friday morning came and so did the pick up from Shrewsbury. Mick went off to get the car whilst I pottered waiting for his return. Every now and then I have a look at Lillian’s blog to see what we were up to a year or two ago. Since selling NB Lillyanne I have been surprised that everyday apart from two the blog has had a few viewings. However all of a sudden the views had shot up, 74 and it was only the morning! Blimey that was quite high for when it was our live blog. On the wordpress statistic page you can see where people have been referred from and there was a high proportion coming from Canal World Forum. So I clicked the link and found that there was a thread about lithium batteries and Brian from NB Harnser had posted a link to Lillian’s blog and then here.

As there seemed to be so much interest in our batteries (those who read this blog regularly know we don’t have them yet!) I thought I’d give you a very quick round up especially as we have had an update.

When Oleanna was being built we decided to fork out for Lithium Ion batteries. 2 x 24volt 50amp hour batteries in parallel. In case these didn’t give us enough capacity the battery tray was made to hold two with an extension should we decide we wanted to up our capacity to 3 batteries. Batteries were ordered but only one arrived, the other was on it’s way. The boat systems were tested with this one battery, but this was kept to a minimum hoping to keep the number of cycles down so that the battery bank when complete would all have a similar number of cycles. Sadly the second battery didn’t turn up, so we waited and waited and waited. After waiting getting on for six months one finally was manufactured for us, we really wanted our boat to be on the water with us on board by now and this was the only thing holding everything up. Others would most probably have given up by now and gone for more standard batteries, but this would mean changes in the engine bay which had been built with these batteries in mind. We decided to be patient.

In April the battery company lent us 2 x 12volt 100 amp hour gel batteries wired in series. These fitted our battery trays and meant we could move on board whilst we waited for the second battery to arrive. We soon decided that a third battery would be worth getting hold of, if it was possible! The ordering of this coincided with the second one arriving in Sheffield. So the waiting started again for a third battery. This arrived quickly in comparison and the other batteries were put on charge so that they would all be on a par when installed. However…. the original battery wouldn’t charge so was returned to be reset by the distributors. Before Christmas we heard that they hadn’t been able to reset the battery, so had ordered a new one which would be shipped from the States, hopefully to arrive early in January.

On Friday we had an update from Finesse (our boat builders) that they now had a date towards the end of the month when our new battery should arrive in England, it will then take a few days for it to be delivered to them. A rendez vous will then be arranged for them to come out to install the three batteries and alter the programming on our inverter/charger for the Lithium Ion batteries. Once this has happened we and Finesse will be celebrating the final completion of Oleanna. However we have been this close before, so none of us are holding our breath! 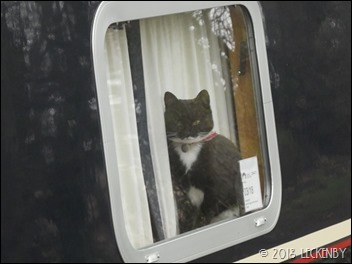 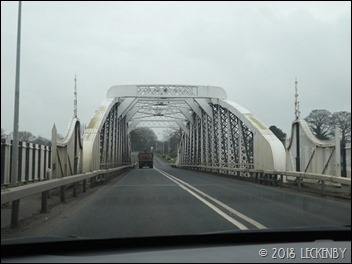 Back to our trip to Scarborough. We had a very grey trip over the Pennines and arrived as planned at our friends Dawn and Lee’s house. Here we caught up on the last month since we last saw them and had a very nice meal to fill our stomachs before what was likely to be a bit of a boozy evening. 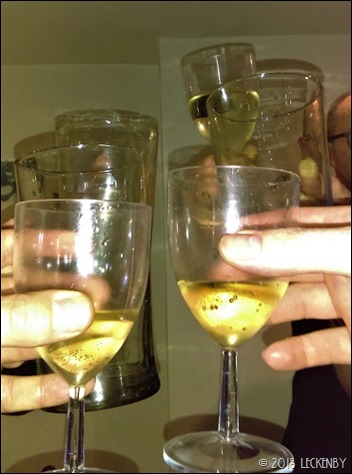 The original plan had been to gather as many of the old production team of the Stephen Joseph Theatre from around the millennium to raise a glass in memory of Mick Hughes, a pub had been thought of. A production team would not be complete without the writer or director, so Alan Ayckbourn and Heather were contacted to see if they would like to join us. They very kindly offered the use of their conservatory for the evening where we all had enjoyed many a party in the past. 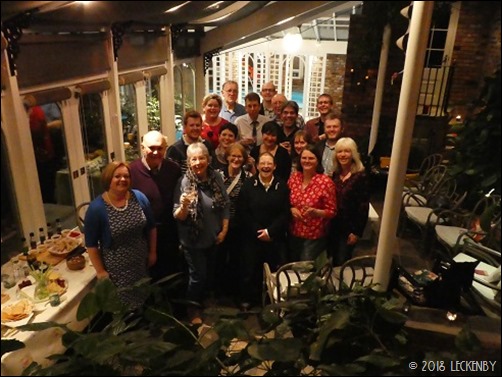 In all 21 of us raised a glass or several to Mick . Alan made a very touching speech which of course included anecdotes of how he had first met Mick in 1972. It was a very suitable evening to say Adios to Mick amongst friends from far and near, only a few still work at the theatre now. If Mick had known about our gathering I suspect he’d have been a little bit miffed at not being able to make it himself! 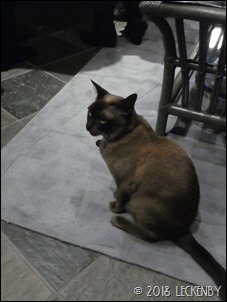 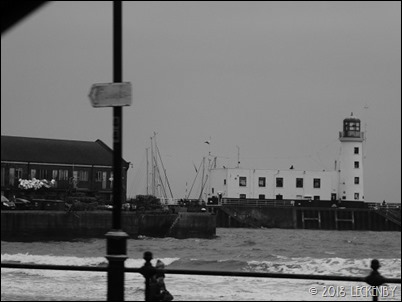 This morning we had a slow start, thanked our Scarborough B&B hosts Dawn and Lee (Yes Duncan we will stay with you next time!) and then called in at Fleur and Ruths. Here we had an hour catching up with Mick’s sister (my Mick) Kath who had come up from London for last night before we all needed to be on our way. A quick drive to see the sea and a pause at Halfords for some oil for Oleannas engine before crossing back over the country to Wales.

Tilly had looked after Oleanna well and the only casualties were items of underwear we’d left drying on the airer, most of these now on the floor. I really don’t know what they were expecting having left the climbing frame out for me. I had to amuse myself somehow! It took a while for the stove and central heating to raise the temperature of the cabin, but once the chill was gone we were cosy once more. Some sad gits chickeny things were enjoyed that we’d picked up on route from M&S along with another glass of wine. 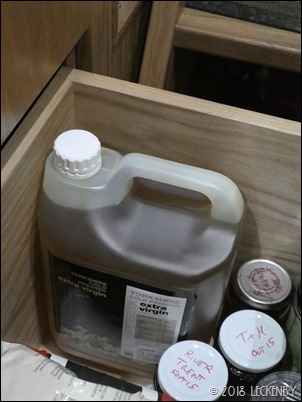