A bit of a lie in with Saturdays paper and then we had to make full use of the hire car.

First it was a shopping trip into Whitchurch to stock up the fridge for the next week. Walking to the handy layby where we’d left the car (near the bridge over the locks) we managed to pass by a C&RT chap who was drumming up support for the trust by enrolling friends. We don’t have a problem with the Trust doing this, but with not a lot of income we feel that we give C&RT enough money as it is in our licence fee. Having come across this chap before and others, we know that once they start talking to you they do their darnedest not to stop until you give in. Luckily he was busy chatting away to a lady and on our return he realised that we were carrying heavy bags and were on a mission to get back to the boat. We stocked up on essentials but only got two boxes of wine! No 25% off deal and as it’s now January we are trying to have two days a week without alcohol again. 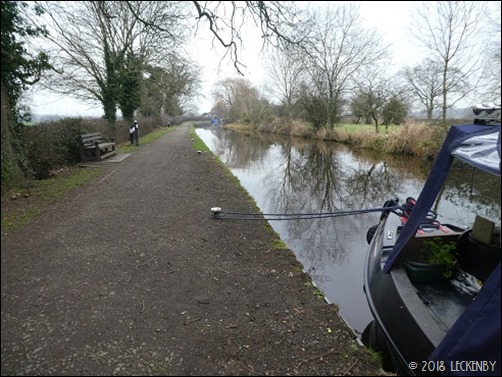 The boat in front of us had moved off to wind and head towards Ellesmere so as I stowed the shopping Mick pulled us forward to the end of the Visitor Mooring so that when we want water our hose will reach the tap without us having to move.

Next we thought of going for a bit of a drive, maybe to an interesting house or pretty gardens somewhere we’d not normally get to from the canal. However with Oleanna’s next service due soon Mick wanted to get a filter as we’d picked up oil on our way back from Scarborough. So we took a cross country route over to Nantwich to visit the chandlers at the marina. They of course are closed on Sundays!

So we passed under the aqueduct and turned left. Mick thought this would be the way to get to Barbridge and the chandlers at Medway boats. It was if we’d turned left almost straight away again or done a u turn! Instead we followed signs round Nantwich to reach the A51 which took us 6.5 miles anti-clockwise around the town, when a mile behind us was where we should have been. Now you could blame the navigator, but she blames our road atlas which has a lot of writing over roads and where junctions might be, so for local roads it is almost useless. 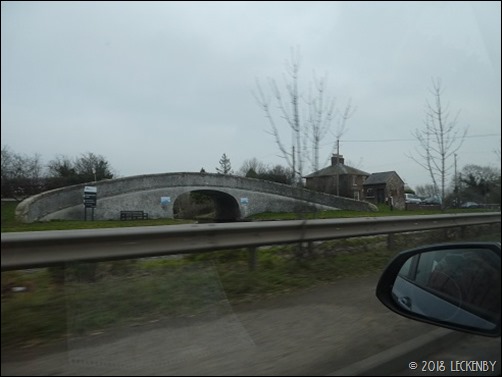 However we found our way in the end and crossed over the two hump backed bridges to the chandlery. At first it seemed like it was self service, no sign of anyone. The filter we needed was getting on for £4 cheaper than the last one we’d bought, so Mick picked up three. After having a good look round I eventually spied a lady sat in the warmth of a back office very much engaged in what she was doing. 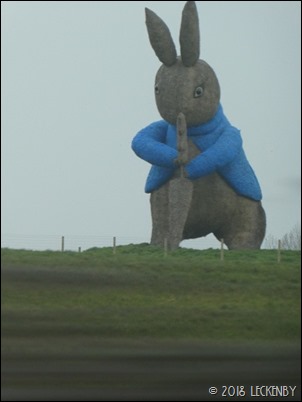 By now it was too late to find somewhere to visit, but I was in need of a pit stop. We happened to know of some facilities nearby, so pulled off the A51 to use them. 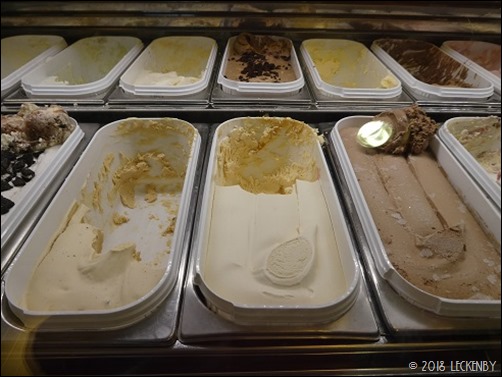 It just so happened that across from the loos there is a rather good chilled medication dispensary. With the car having told us that there was a risk of ice we thought that we should partake, it would have been rude to use the loos and not spend any money. Hard to make up our minds what flavour but in the end Mick chose Cappuccino and I had Choc Choc Brownie, not quite as grown up as the Amaretto I’d had last time, but far tastier! 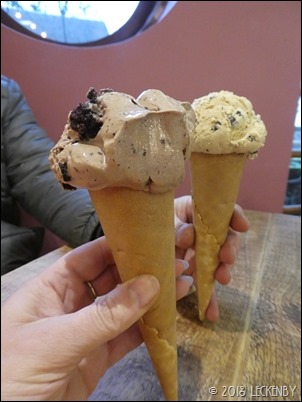 As we sat eating our medication a little girl attempted to fit most of her head into her ice cream cone at the table next to us. No matter what Dad said she wasn’t going to eat the cone, but was determined to get the last bit of ice cream out of it. A constant stream of people came in, they all stood concentrating trying to decide which flavour, their eyes lighting up at the choice and grins of anticipation crossed their faces. After we’d seen what a cookie sandwich looked like and one chap with a three scoop cone we decided it was time to leave.

Back before sunset Tilly got the chance to head off outside for the first time in a few days. Half an hour she said. Taking refuge from a passing woofer back at the boat was a mistake as the doors closed in front of me. Half an hour is no where near enough time! Tom stood outside for ages longer, so not fare!!!! Mick had got chatting to a couple from Melbourne who are wanting to cruise the canals. They had plenty of good questions, just hope Mick didn’t put them off by talking toilets too much.