We were glad that we didn’t venture up the Prees Branch as when we woke on Monday morning we could see what we thought was ice at the junction and my it was cold outside. So we let Tilly out to explore whilst we enjoyed a cooked breakfast and I finally got round to writing some emails, there’s still the tax return to do but the tax man can wait a few more days! 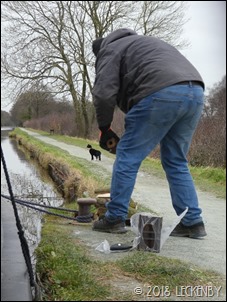 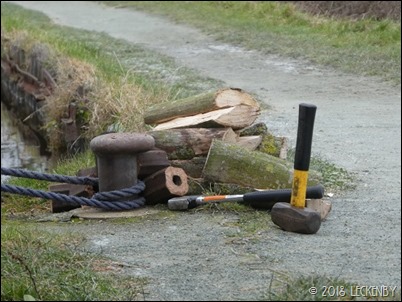 Mick got the axe out and did gathering things and split more logs whilst Tilly hunted up and down the towpath for friends. When she decided that she needed a bit of a bath and came inside Mick and I set off for an explore of our own.

There is a walkway that leads to a viewing area overlooking the Mosses. I suspect the view is very different later in the year. Warning signs about Adders in the grass made me glad it was January and they would all be hibernating rather than Tilly finding a new type of friend to play with. The birds we saw when we came this way a month ago are likely to have been Hobbys and if the paintings of them are representative of their size then they are far smaller than I first thought. Apparently they catch Emperor Dragonflies which thrive here over the peat fields. Most of what we could see was all frozen and covered in frost hard to believe much life lies dormant here.

Further along the towpath is the England Wales border. So Mick did the honours and stood in both countries. 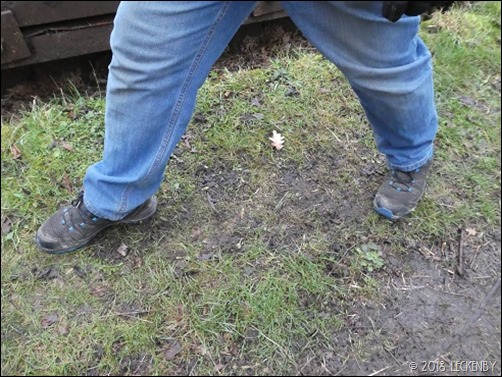 We could have walked further but decided to walk back and have a look up the Prees Branch. 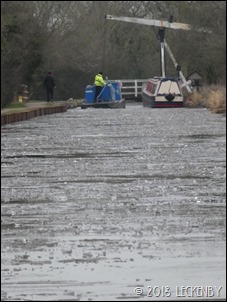 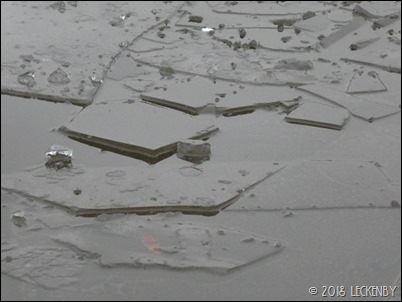 The only boat we saw moving all day was a C&RT work boat that had turned up the branch. It did a good job of breaking the ice, we could hear it for ages as it fought it’s way through what looked like inch thick ice. Without a map with us we gave up our walk along the branch after reaching Bridge 3. There wasn’t much further to go as it turns out as the basin was only around the next bend. The workboat had also stopped here leaving the ice ahead untouched. 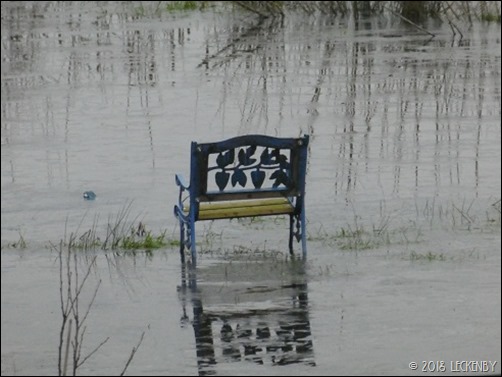 The house that stands at the junction has a lot of interesting signs about the place, along with several small lakes with either shepherds huts or old cattle wagons by them. Each lake had a bench by it and a life ring, I wondered if they are holiday lets. 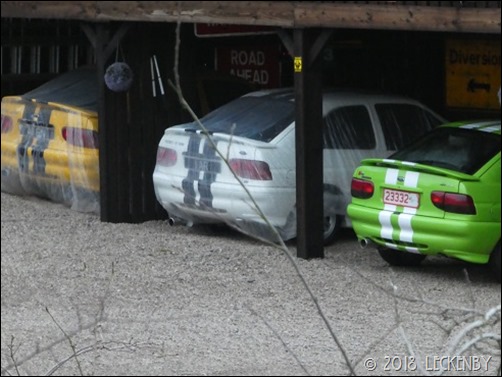 In a garage behind the house were three ford Escorts all in matching paintwork just different colours. Two were wrapped in plastic to keep themselves clean. Who ever lives here certainly likes collecting things. 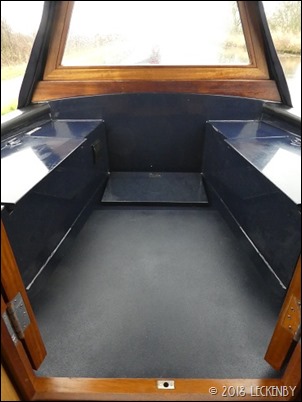 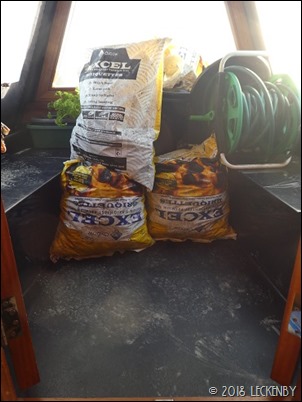 On Tuesday we decided to wait for NB Mountbatten, Richard was making his way to Ellesmere on a run. With staying put for the day in mind Tilly went out as we sat down for breakfast. I busied myself with emptying out the well deck and giving it a really good clean. All the mud and the coal dust had built up so today whilst it was almost empty was a suitable day before it got filled up again. The port cabin side got a good wipe down too and Mick managed to stow the rest of our logs in the engine bay to dry out some more. 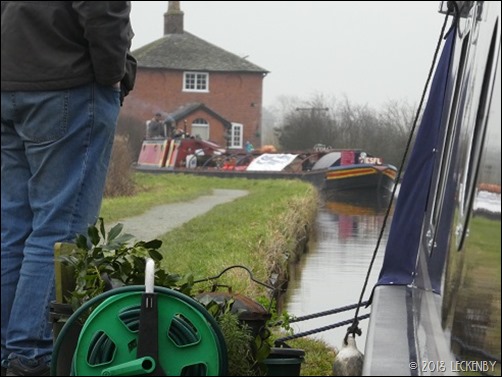 At around 1pm we could hear the sound of an engine coming from the direction of Whitchurch, it could only be NB Mountbatten. Richard rounded the bend and slowed as we came into sight, we’d already put our order in via text. Chatting away he moved Mountbatten up and down the side of Oleanna by walking along her gunnel stopping where she was needed to off load coal and then to fill our diesel tank. I think he’s done this a few times before!

He’d been informed by C&RT that he would be able to get through at the stoppage at Bridge 47 as they would only be working on the sluice there. As he disappeared along the long straight we hoped we’d not see him later on reversing back, he got through, but did get stuck on a sand bar near the meres for a while until he fought his way off. 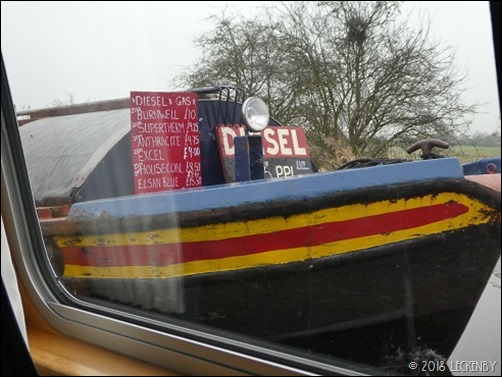 Mid afternoon Mick decided to put Tillys pooh box outside. We’d not seen her all day, does she not like coal boats? Last time this happened was last year on the Macc when NB Alton delivered to us. So just in case she’d got lost we thought the aid of her scent might help and I was starting to get a bit horse shouting for her. Look I’d been busy! There was so much to do out there. Those Hobbys are a right laugh and kept me busy. When I could smell myself I knew that they were starting to fret, so made my excuses and headed for home. This took a little while as there was quite a bit of water to wade through which was very cold. After a good long cat bath Tilly slept for much of what remained of the day. 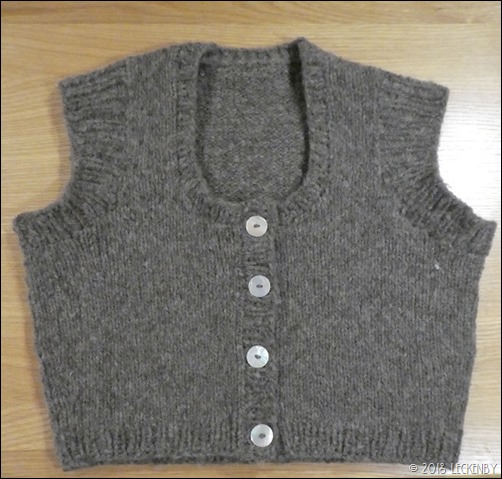 I finished off my latest knitted waistcoat and started on a hat as we worked our way through four episodes of Series 3 of The Line Of Duty. Only one more of this series to go which we’ll watch tonight before our bonus internet runs out at midnight. 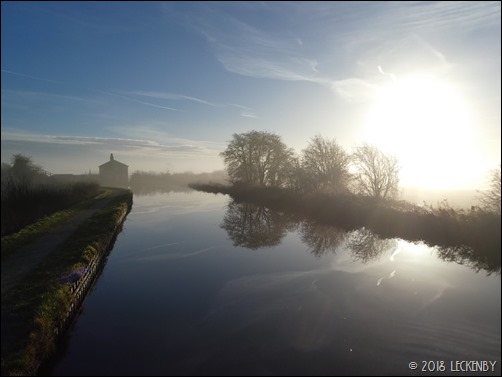 When we woke this morning fog surrounded us, but by the time we’d had our breakfast the sun was burning it’s way through revealing bright blue skies. A day for cruising, almost spring like. 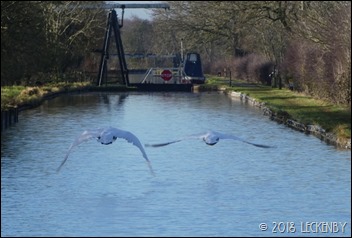 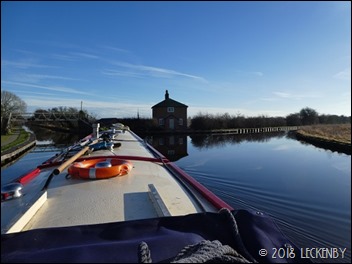 Today we could see that the flow on the canal was back, as I lifted the first bridge a mass of debris held back by the bridge drifted by. Two lift bridges today, they are hard but a good cardio vascular workout for a few minutes. Suspect I’ll need to do a few more to work off the overindulgences of Christmas. Now we were skirting our way around Wales, the border moving along the towpath and then following Red Brook for some distance just a stones throw away. 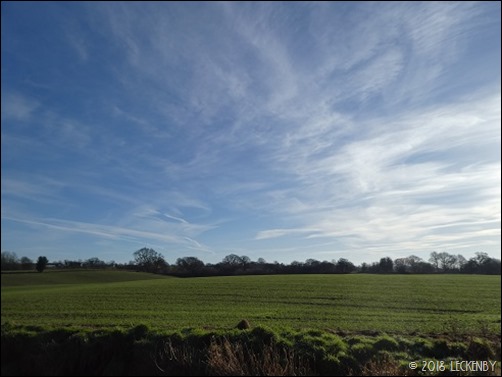 Before we reached the next lift bridges we pulled in at a 48hr mooring. Here gaps in the trees gave us great views across fields on both sides. The sun warmed Oleanna up so much on the starboard side that neither bathroom doors would close fully, the difference in temperature from one side to the other must have been quite big. We sat for much of the afternoon with the side hatch and front doors open, Tilly coming and going frequently. Mick had a hair cut whilst Tilly climbed a hollow tree, both inside and out. What a beautiful day, well until our little thug returned to eat a friend she’d just murdered! 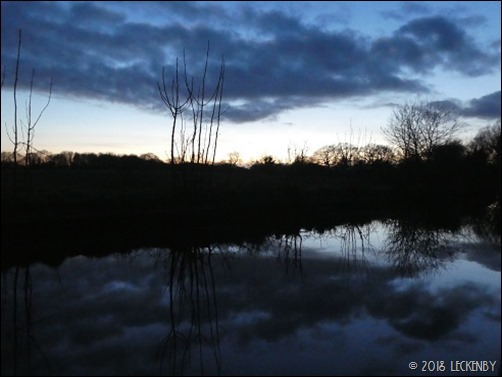