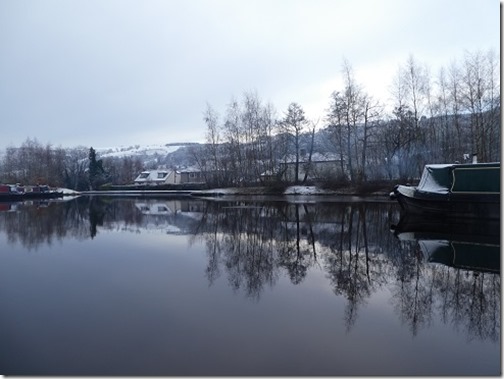 The last couple of days we’ve had my brother and his family staying with us, our first overnight guests on Oleanna. They drove up from London on Friday arriving with us early afternoon. Here in Llangollen it had snowed overnight, nothing like a couple of weeks ago, but enough to turn most green things to white. A half inch covering had been sat on the pontoons when we woke but by the time the London Leckenbys arrived much of the snow had melted, but the hill tops still looked pretty. 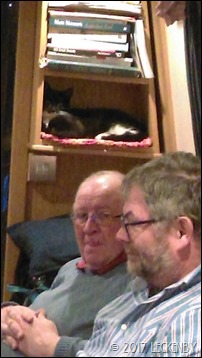 An afternoon of chatting and receiving our last presents from them. Josh had bought me some very good stripy wellies, unfortunately my calf muscles mean that they fit a little bit too well and it took some effort for Mick to pull them off again. We’ll see if I can exchange them for some with wider tops. Mick received a new coal scuttle. Since selling Lillian we have been managing with a small red bucket which holds just enough coal to get a fire started. The space we had for a scuttle is limited, but I had found one on ebay that was the right dimensions and to our taste so had pointed Andrew in the right direction.
What was going on? I go out to check over my estate for a few hours, but when I came back there are all these people cooing and meooing at me, sat just where I wanted to sit. They had filled the boat up with so much stuff the only place I could sit was up on my shelf! Good job I was the only one that would fit up there. 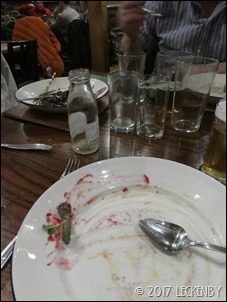 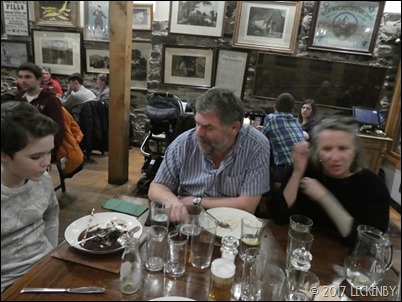 We went to the Corn Mill for a meal in the evening, which had been recommended by other boaters. The menu wasn’t quite what I was expecting having been to other Brunning and Price pubs, but then they don’t treat their pubs as a chain, but as individuals to suit their location. My fillet of Bass was nice, the burgers and fish and chips were tasty, however the puddings and beers were exceedingly nice. We had a very good evening sat in  the conservatory over looking the raging river below. 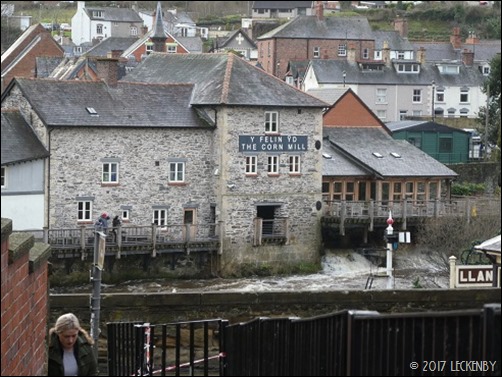 The sleeping arrangements worked as we’d expected, glad I’d managed to get that extra six inches on the dinette bed. You want your guests to be comfy, but not too comfy. It is times like this that we miss the extra two foot of cabin space that Lillian had, more things had to be moved around to make up the beds. With the stove out Josh was comfy on the sofa with the pouf pulled out to make it longer (he has grown since last we saw him). The dinette bed pulls out like a dream. I decided that my sleeping arrangements would be confined to the normal bedroom on top of my normal crew. 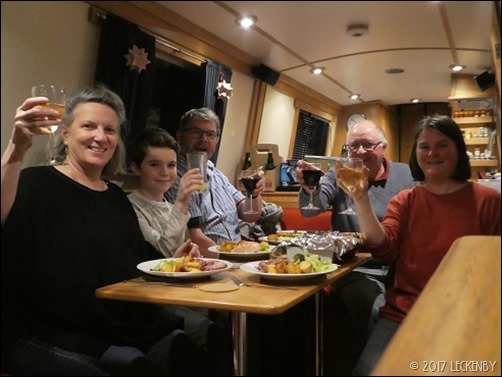 After getting a Saturday paper and a few bits that hadn’t been available yesterday we ended up having one of those family lazy days. This would normally involve reading the new books you’d got for Christmas or playing a board game. However the London Leckenbys had left the new game in the south and all the books had been perused days ago. We considered walking up to Castell Dinas Bran but nobody could summon up the energy as it looks like a fairly vertical climb. Local Hero was eventually watched as I got food together for late afternoon. A very nice leg of lamb from the butchers was accompanied with roast veg, green veg and plenty of wine, followed by a warm Dorset Apple Cake with a side of chilled medication. All very tasty even if I do say so myself. 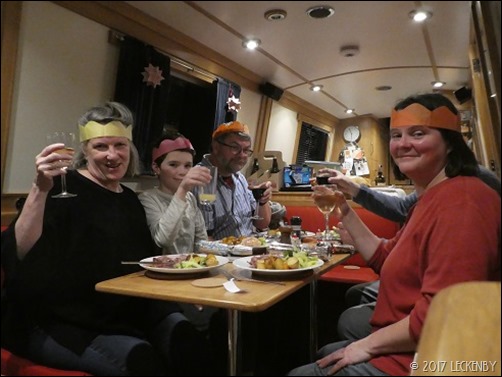 This morning after bacon butties and listening to Tilly complaining at not being allowed out we waved goodbye to Andrew Jac and Josh. We may end up seeing them a little bit sooner than planned as they are wanting some decorating doing in their house and I’ve been given first refusal of the job. It’ll be put into the mix for next year and we’ll see what we come up with. After a lovely couple of days with family we were now back on our own again, gosh we lead a quite life! 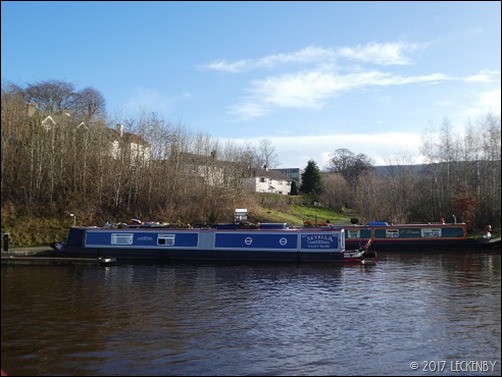 On the way back to Oleanna, we had chance to have a chat with Geoff from NB Seyella who had arrived at the basin yesterday. Nice to finally get chance to meet him properly, our bows have crossed several times this year and it was good to hear that Meg (their dog) was improving and enjoying slightly longer walks.
Before we made our move to leave we made use of the last bit of electricity and packed away all the spare bedding into vacuum bags under the sofa. We now had reclaimed the cabin space. I however had lost my new elevated sleeping position with views on both sides! With one final top up of the water tank we unhitched the hook up cable and pushed back. This is the longest we’ve stayed put in one place since leaving Kings Marina a couple of years ago (and that was only because of medical necessities) and today it felt odd to be leaving. We’ve very much enjoyed our time in Llangollen and winter is by far the best time to be here as the views are much better. Our feeling is that we will be back, maybe even next winter as we didn’t manage to do everything we’d wanted to. 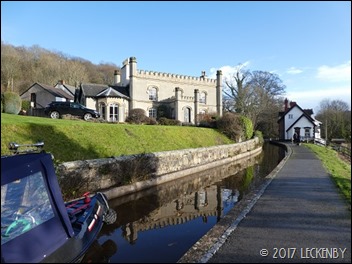 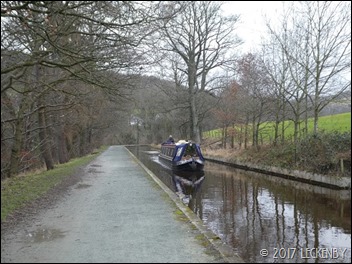 The strong  gusts of wind had now died down which made winding in the basin easy, we waved goodbye to Geoff and headed back out onto the cut for the first time in fifteen days. I walked ahead to check for oncoming boats in the narrows, but we only met boats where the canal widens out. Heading down stream is so much easier, Oleanna slowed a bit on the narrows but still made progress. The weather changed from sunny to wet back to sunny as we made our way along the arm. As we got closer to Trevor we met more boats, one a short hire boat and two canoes all at the same time and then the trip boat just after the final narrow section of canal. 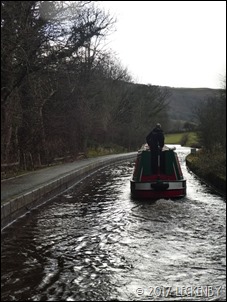 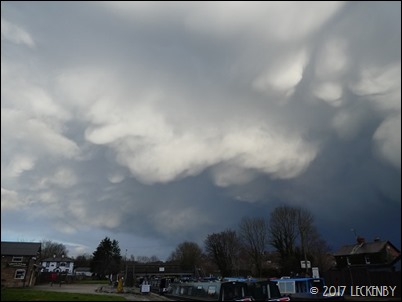 Coming up to the junction we could see that there was a boat crossing the aqueduct, but as we were heading downstream we knew we’d reach the junction before them and pulled in to let them pass. Mick lined us up for our crossing, but at the far end of the Pontywhatsit we could see another boat had already started to cross. So Mick stepped off with the centre line and we waited. 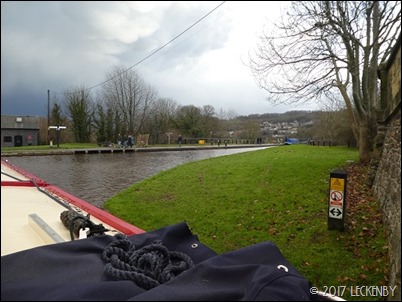 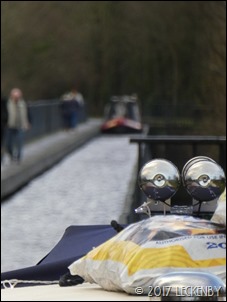 There were plenty of walkers on the aqueduct and today we got to add another stupid question to the list gongoozlers come up with. Unfortunately I don’t think you can hear the original question on the video, ’How do you know nothing is coming?’ ‘There’s nobody there!’ A 336yrds of straight aqueduct in front of you would sort of suggest that really. But a chap in the same group then asked ‘How do you know it’s your go’?’ !! 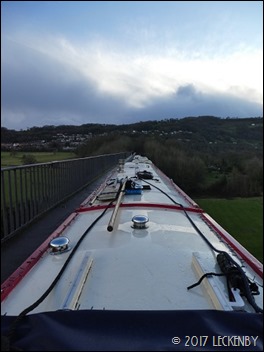 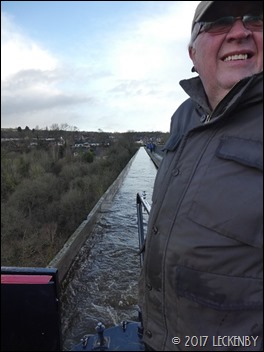 Our crossing was easy, Mick smiling away at the tiller and me grimacing doing my best to distract myself as we passed over the 126ft drop. Once over, back on land I hopped off and wound up the lift bridge. By now we were getting low on day light hours, so wanted to stop sooner than  later to be able to let Tilly out for a while, so we carried on and pulled up shortly before Whitehouse Tunnel. The doors opened up and Tilly wthout even thinking about it jumped off the right side of the boat and headed off down the bank. Thank goodness she was accepting this outside. At bloomin last! Somewhere new to explore. As the stove was lit and the gas kettle put back into service the heavens opened, we’d stopped just in time.
We’re not big New Years Party goers so here will just be fine for our chink of glasses at midnight. Tomorrow we need to get through New Marton Locks which close on Tuesday for maintenance and onto Ellesmere to restock the food cupboards.
Wishing all our friends family and readers a Very Happy New Year, may it be even better than 2017.
Also a big Happy Birthday to Storm for today, Kathy and Jeremy for tomorrow. 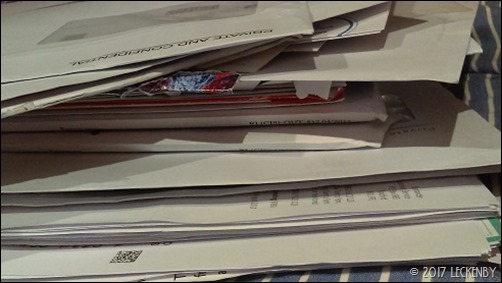